When prohibition is equivalent to treatment

April 2 2018
47
Denial of well-known historical facts and building on this basis an alternative reality based on aggressive ignorance requires an adequate legal response. 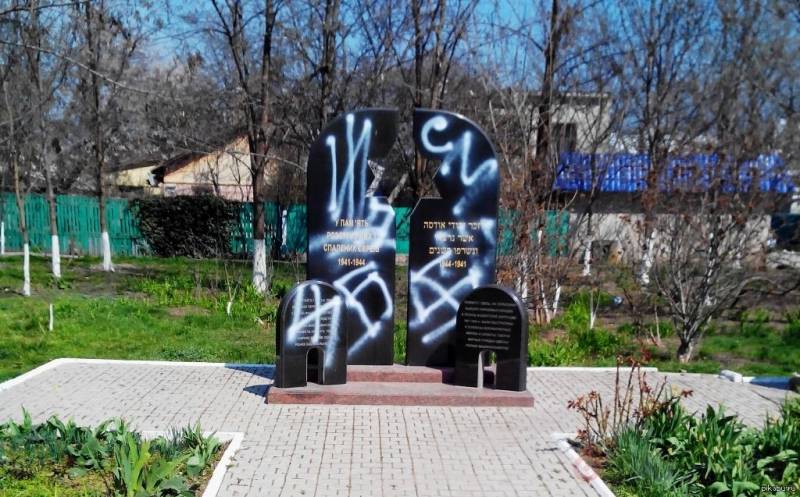 Until today, the author of these lines, as a person democratically minded, was a categorical opponent of any formal prohibitions on the discussion of any historical themes and the generally accepted postulates associated with them. It seemed to me an absolutely vicious practice of legislatively banning Holocaust denial and prison sentences provided for such statements in a number of seemingly civilized countries.

Moreover, the trend of imposing such bans began to spread recently with the speed of the epidemic. In Ukraine, for a long time, the criminal article has long smelled like any doubts about the so-called ethnic Ukrainian famine, which is in no way supported by the data of objective science. In Poland, it was recently decided that they will imprison any mention of the responsibility of the Poles for participating in the mass extermination of Jews.

And even in the Russian Federation, proposals to ban, for example, statements and actions that insult public morality, or to punish for denying the victory of the Soviet Union in the Great Patriotic War, are becoming increasingly popular.

I repeat, until today, all this seemed extremely ridiculous to me, because in this there was an attempt on the basis of the foundations of human freedom - the right to have one’s own opinion and express it publicly. So from today, your humble servant, does not think so. Or think, but with very substantial reservations.

The fact is that the day before on the Internet my material was published, in which it was a question of one long-forgotten episode in the history of the Second World War. Namely, the events in the western Ukrainian (previously Polish) city of Kremenets, Ternopil region in August 1942. The local, mostly Jewish population was driven by SS men and Ukrainian policemen into the so-called ghetto, where it was expected to be completely destroyed. But something else happened. The ghetto prisoners rebelled and for two days resisted their killers. Of course, they were doomed. The uprising was crushed, and all local Jews, numbering several thousand people (accurate data not available), were shot.

Moreover, it was not the Germans themselves who destroyed the people, but their local minions from the so-called police battalions. From the methods of the “work” of these butchers, even some SS men became ill — such facts were officially recorded by the Nazis themselves.

The meaning of my appeal to this topic was to draw general attention to the fact that today exactly the same Nazis and xenophobes, professing the exact same mania of the “titular nation” and fiercely hating people of other nationalities, came to power in Ukraine. That is why we should not forget about the horrors that accompanied their previous coming to power. And to remind them of the current generations in all possible ways, including the creation of films on this topic.

When the article was published, comments from readers naturally followed. From some part of which the hair on my head, figuratively speaking, stood on end. Of course, I was ready to admit that not everyone will be aware of these events. Since the author of these lines, a graduate of the Soviet Faculty of History, did not know anything about this uprising before.

But what I read in the comments was not about banal ignorance. And to a kind of manifestation of “alternative knowledge” of history, within the framework of which there is generally no place for any real historical facts, nor even their most commonly accepted interpretations. And to put it more precisely, there is no place there either for the world-famous and equally world-convicted Nazi crimes of the Second World War, or, accordingly, for the world-historic significance of our victory over this plague of the twentieth century. For what is worth the victory, if, according to these commentators, the Nazis were quite a harmless people. And all the bad that they say about them, just bullshit. Specifically, these comments are about the period of the Nazi occupation of my hometown, Odessa. (Published without editing, the mistakes of the authors saved. - Ed.)

Dad
It turns out that thousands of Jews were shot in Odessa, as described by a Jewish scholar from the United States. Not only are there no burials, it is also described colorfully as it turns out that thousands were driving them past our house, where my grandfather and grandmother lived and did not see anything! Moreover, the exact place is indicated, Dalnik, where thousands of Jews were burned in barns. And there were no wooden sheds in this area, no burials, and the locals never heard anything! Moreover, the Jewish population of Odessa has not diminished during the occupation period - watch the film "Liquidation", and this is 1955 year.! Where the Jews are, there is a lie.

Galina Deli
And it is true that in our area the sheds were never wooden. "writer" pierced on such seemingly trifles. Jews in Odessa suffered? This is from the realm of fantasy, because they ruled Odessa and built its internal policy.

Enough! If you quote this nonsense further, you can simply lose your mind. Just think about it! One alternatively thinker casually explains, with reference to his grandmother (!), That there was simply no mass extermination of Jews under the Nazi invaders in Odessa. And in other places, for example, in the same Kremenets, apparently, everything was okay too. The second similar creature agreed to the point that in the same Odessa, under the Nazis, the Jews ran everything and even “built up internal politics”.

Of course, the easiest way out is just not to pay any attention to idiots. But there are already thousands of them today, and tomorrow, it is quite possible that there will be millions. Just ignore such a mass is unlikely to succeed.

As an inhabitant of Odessa, it is especially hard for me to read. If only because I myself had the occasion to listen to the stories of many contemporaries who survived to our day of those terrible events, the victims of which were tens of thousands of not only Jews but also captured Red Army soldiers, Soviet and party workers, and in general everyone who looked askance at the invaders.

As a person not alien to history, I also know that the occupiers did not at all make a special secret of their atrocities. So, for example, after the explosion by the underground workers of the German-Romanian headquarters on Marazlievskaya Street, they quite officially announced that for every dead soldier Bolsheviks would be shot at 100, and for 200 for an officer. In fact, they killed not only and not so much the Bolsheviks, as all those who came by the arm. And in quantities far exceeding the official "limits". 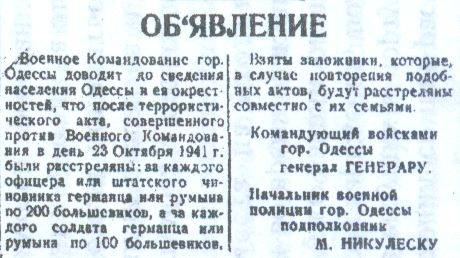 In the end, in Odessa there is a memorial center of the Holocaust, where thousands of eyewitnesses are collected. Moreover, not only Jewish nationality. In one of the city parks, there is even an Alley of the "righteous of the world", each tree on which is planted in honor of a person or a family who saved one of the prisoners of fascist bondage. So who did all these people save, if, as we are told now, the fascists did not kill anyone, and the population of Odessa almost prospered with them? 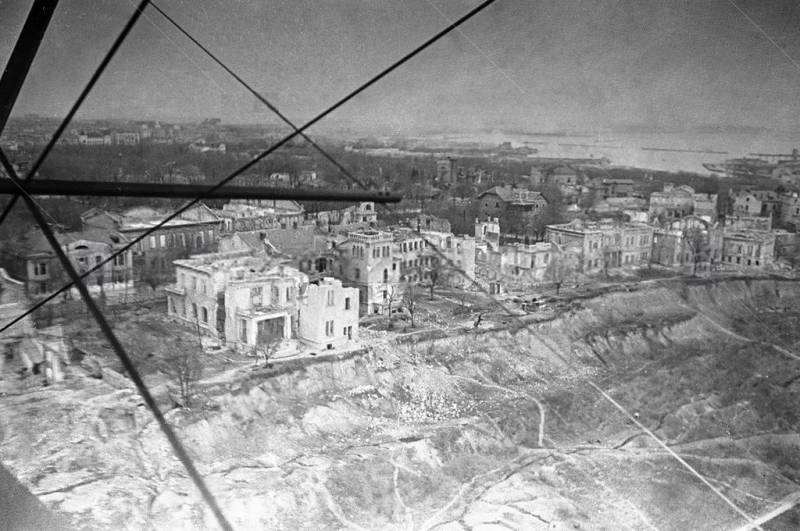 The problem, however, lies in the fact that "alternatively thinking" individuals, such as those cited above, have similar arguments to the bulb. For all these arguments and facts begin to work only in combination with a certain level of general education and civic consciousness of the “recipients”. Meanwhile, both of them, to date, leave a lot to be desired. And the trends, alas, are not encouraging.

The tumultuous official activity to consolidate the “spiritual braces” of our historical self-consciousness, as before, boils down mainly to ceremonial-output events in which the “alternatively thinking” see, perhaps, a hindrance to road traffic. At the same time, the unobtrusive, but quite successful introduction into the public consciousness of the most primitive physiological "values" of the Western anti-world, leads to the devaluation of our traditional value priorities, the distortion of ideas about the surrounding reality and world history.

Today, in the course of this transformation, an intermediate goal has already been achieved - on “practically equal responsibility of Germany and the USSR for the Second World War”. Although, in fact, it is a complete and easily refuted fiction. But, again, refuted by facts and knowledge. To which, today, very many do not care. And tomorrow, it’s not an hour, “it turns out” that Hitler’s Third Reich became a victim of insidious Stalin, and all Nazi atrocities - “an invention of Soviet propaganda propaganda”.

But why tomorrow? Judging by the above comments, the process is already in full swing. And more and more individuals appear that are harmlessly reminded of previously completely obvious things. 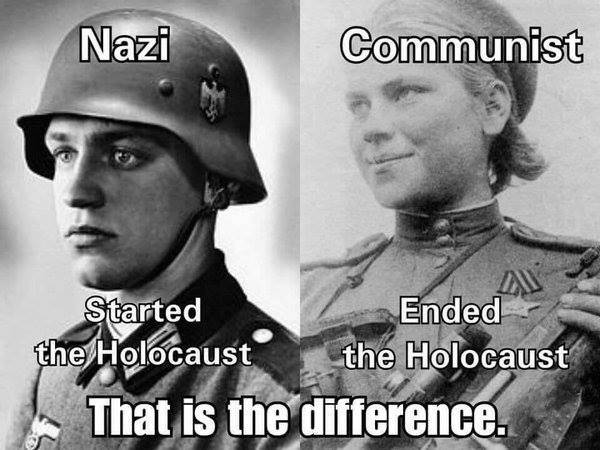 That is why today I have no previous confidence that the official ban on public propaganda of terry idiocy, including in the form of denial of the well-known and legally executed crimes of Hitler's Nazism and his bloody henchmen from the same Ukrainian Galicia, is so bad.

For that part of society, which is at a certain stage of mental and moral degradation and which, by virtue of this circumstance, becomes immune to the arguments of reason, this legal way of healing its ailments is very much shown. For, if not the mind, then at least an elementary fear would stop this category of citizens who truly do not know what they are doing. The whip of the law is much more understandable and intelligible than an appeal to the mind, which many practically do not have. And in this statement there is nothing offensive. As in the fact that in medicine, each disease is prescribed its own method of treatment. The degree of radicalism is directly dependent on the degree of neglect of this disease.

Ctrl Enter
Noticed oshЫbku Highlight text and press. Ctrl + Enter
We are
Reports from the militia of New Russia for 27-28 September 2014 of the yearResults of the week. "Well, do not change me because of every idiot!"
Military Reviewin Yandex News
Military Reviewin Google News
47 comments
Information
Dear reader, to leave comments on the publication, you must sign in.