March 27 2018
56
Liberals and, especially, national liberals like to speculate about possible historical alternatives to Russian statehood. In their opinion, everything would have turned out differently if instead of the totalitarian "Horde-Byzantine" Moscow, the Russian lands were united by the "pro-Western and advanced" Novgorod, or the even more "civilized" Grand Duchy of Lithuania. 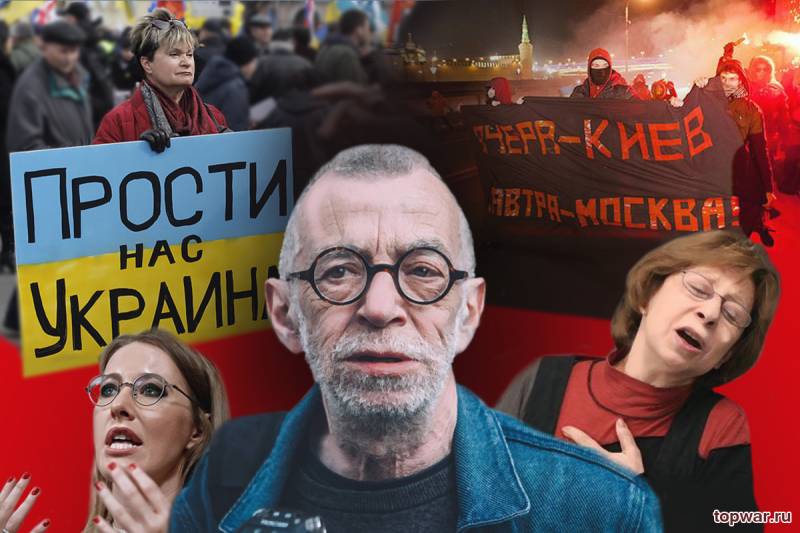 History, as you know, has no subjunctive moods. Moreover, Novgorod, which was led by merchants, who were preoccupied, above all, with profits, especially did not have imperial ambitions. Namely, the too pro-Western course of the GDL, which led him to a union with Poland, not only prevented him from becoming the unifier of the Russian lands (in the Principality of Lithuania, the majority of the inhabitants spoke Russian and professed Orthodoxy), but also destroyed him, in the end.

Be that as it may, the reasoning of the liberals about "pro-Western" Russia led them to the idea that post-revolutionary Ukraine is nothing but a "European alternative" for our country.

One of the representatives of the Russian opposition Lev Rubinstein, who soon after the triumph of “euromaidan”, breathing the “air of freedom” in Kiev, wrote on his Facebook quite clearly expressed this idea quite clearly:

“I do not exclude in the foreseeable future such a situation when, in the framework of a wide Russian-Ukrainian cultural exchange, artists, scientists, energetic businessmen and other different young and middle-aged people will stretch to Kiev, for whom personal freedom, professional initiative and social -cultural diversity is not just the norm, but a must. Thieving officials, full-time and freelance snitchers, as well as "golden eagles" who with informal enthusiasm, supported by the material factor, will come to Muscovites for their disgraceful defeat will come from Moscow to Moscow in commodity quantities.

There is no doubt that this idea has visited, not only the bright head of Lev Rubinstein. The project “Ukrainian alternative” was seriously and thoroughly studied by our Western opponents. It would not be an exaggeration to say that the fascist insurgency in Ukraine was started, including for the export of the national liberal revolution to our country.

Ukraine was to become not only a testing ground and a laboratory platform for working out methods of promoting “European values” to Russia, but also a training center where they would train future revolutionaries of various specialties, from militants to propagandists and organizers. In addition, it should have become a demonstration model that will show the Russians how great it is to live in a “free country that has chosen the European path.”

However, the project of "alternative Russia" is clearly not working out.

The other day, the Russian actor, the head of the Moscow Satirikon Theater, Konstantin Raikin, got into the database of the Ukrainian site Peacemaker. Recall that Raikin, after he had sharply criticized the Russian leadership for "censorship", became almost a symbol of resistance to the "Kremlin regime."

Now he was among the “enemies of Ukraine”, and was included in the “proscription lists” of the Peacekeeper website, acting in close cooperation with repressive bodies.

Recall that a little earlier there was Ksenia Sobchak, who dreamed of "returning" the Crimea to Ukraine.

And this is a trend. Artists, scientists, energetic businessmen and other different young and middle-aged people, for whom personal freedom, professional initiative and socio-cultural diversity are not just the norm, but the urgent need ”disappear into the“ firing lists ”of Ukrainian radicals and Sbushnikov in batches that are marked by Rubinstein. .
For which after that the opportunity to visit the “beautiful Ukraine”, even with a very large desire, becomes unavailable.

And I must say that it is not only a matter of “parochialism” of the descendants of the ancient Sumerians, for whom everything from Russia is a threat.

The fact is that there simply cannot be any “alternative”, “pro-Western” and “European” Russia - it can only be Russian, and no other.

This, in particular, is indicated by the failure of the attempt to westernize Russia within the framework of the reforms of the 90s.

Counselor Yeltsin philosopher A.I. Rakitov then spoke frankly: “The transformation of the Russian market ... into the market of modern capitalism demanded a new civilization, a new social organization, and consequently, radical changes in the core of our culture.” However, these tasks for the implementation of ethno-cultural genocide (and how else would you call the intention to destroy the cultural core of the people?), Encountered serious problems.

Rakitov lamented then that the problem was that Russia is a civilization: “It would be very simple if the transition to this [western] civilization and this market was carried out in an open field. After all, the transition from an uncivilized society to a civilized one is much easier than a change of civilizations. ”

But neither Rakitov nor those who tried to build an “alternative Russia” in Ukraine understand the main thing: their efforts are “monkey labor”, since it is impossible to “westernize” Russian civilization, due to the fact that this giant cannot be crammed into modern European civilization.

As well as a poor, artificially created from several farm dialects, surzhik is simply not able to supplant the Russian language.
And Ukrainian nationalists are closing on the carriers of Russian culture (even loyal to them). Because they are well aware of the inferiority of their subcultural handicrafts in front of her greatness. And they understand that they can not only be an “example” for Russia, but they cannot compete with it in anything. And simply trying to close on "cultural expansion" themselves, being unable to attack.

Contrary to Rubinstein’s prediction four years ago, seeking to “freedom, professional initiative and socio-cultural diversity”, they are not fleeing to Ukraine, but out of it. First of all - to Russia.

Ctrl Enter
Noticed oshЫbku Highlight text and press. Ctrl + Enter
We are
Situational analysis of the death of the MH17 flight (Malaysian Boeing 777), made on the basis of engineering analysis from 15.08.2014Syria: Americans scare themselves, and Asma Asad buys chairs
Military Reviewin Yandex News
Military Reviewin Google News
56 comments
Information
Dear reader, to leave comments on the publication, you must sign in.