Cinema The film "Rainbow": the people who do not win

March 27 2018
17
In the Cinema Hall, we usually view contemporary pictures from a critical point of view. Alas, there is no shortage of them, that in domestic, that in foreign - glory to globalism. But the "usual" fills the edge of the mouth no worse than regular use of mandarins. So today we are transported, seemingly for someone, to the distant past, but for our people it’s like yesterday. Whether it is not customary to interrupt the relationship with parents for a long time, handing over the old people to a nursing home or visiting the “family nest” at best once a month. Either because our people are accustomed to thinking for centuries, the scale of mountains, southern steppes or northern tundra, which seems to frighten our close and distant neighbors on the planet before the goosebumps.


The picture with the bright and warm name “Rainbow” appeared on domestic screens at the very beginning of 1944, a little less than one and a half years remained until the end of the war. The plot at the same time, contrary to the opinion of many “historians” about the hypertrophied “red propaganda”, is very far from glorifying the endless victories of the Red Army. The film is devoid of any epic, it's simple. история about one of the many villages of Nova Lebedivka occupied by the Nazis in Ukraine. Naturally, there is the main character in the picture - Olyona Kostiuk (Natalya Uzhviy), who joined the ranks of the partisans, but who returned to her native village to have a child, where she falls into the hands of the invaders, by the denunciation of her compatriot. 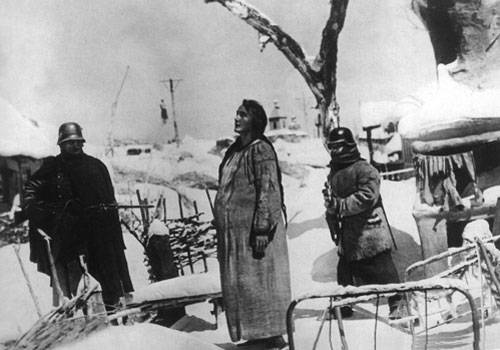 However, in spite of the bright main character, in this film all the unbroken people seem to be the main character. Their very terrible life and the wretchedness of a ruined and tortured village emphasize the cosmic scale of the strength and morality of each seemingly episodic character who has retained his own dignity. At the same time, the heroes of the tape were bred so full-blooded and even rigidly that, against the background of clay and shapeless cinematic heroes of modernity, they seem to be a creep, no matter how long the timekeeping they took the author.

It’s not worth waiting for a happy ending. But about any hopelessness and no speech. On the contrary, in this world, the world of war, in a world without even a hint of peace, only people, while they can breathe, are able to become a support, a constant, in short years of life turn into something eternal in front of others.

The picture is so naturalistic that its director Mark Donskoy was even reproached for this. What is true is true. Despite the fact that the public, accustomed to the modern computer bloodbath and clip style of shooting (when the frame does not last 10 seconds too), can find the video series somewhat archaic (like the actors ’play), the picture is truly fundamental. She does not flirt with the viewer. 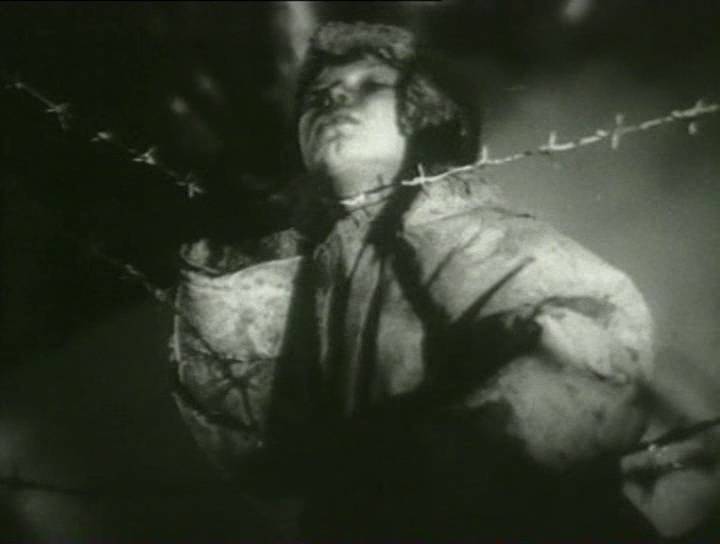 The director managed to create a hell introduced by invaders in the frame. Not a caricature Hollywood hell, filled with the same Hollywood Freddy Krueger, mythical scum and fire, but quite tangible "human". This hell is a frozen desert into which the Nazis turned their beloved land. And here the Nazis are not well-groomed devils in perfectly fitting uniforms with a satanic gleam in their eyes, but icy demons, who themselves created underworld by their ideology, brought it into the world and were unable to live differently. They are wrapped in various cloths, embittered by purely human hatred of all living things, and therefore, as Stanislavsky said, I believe. 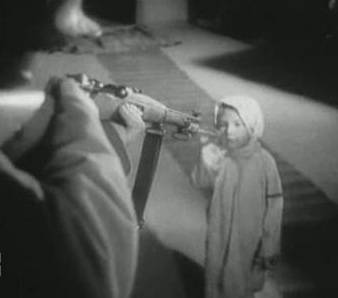 In general, “Rainbow” is not just a feature film, but a film that incorporates uncompromising documentary. True is the only picture on the planet, shot not only about the war during the war, but shot by the people who saw it with their own eyes. This tape is a unique socio-historical phenomenon that has no precedent, and can be regarded as a document of time. Indeed, not a single country in the world simply has such a historical experience of conducting such large-scale, sometimes seemingly hopeless, defensive wars, ending with the complete defeat of the enemy on its land, thanks to the resilience of its own people.

And no matter how much foreign filmmakers puff, they will not be able to make something like that. First, the majority of Yankees, confused with loans, layoffs and a blackmailer wife, don’t give a damn about what back ends the other Yankees will give, whether in uniform or not. Of course, if the media give the command "face", then there will be no account for sympathy and crowds with banners. Secondly, foreign, and from year to year our cinema bohemia is so far from the aspirations and tragedies of the people that it actually exists in a different reality.

“Rainbow” is a wonderful, tragic and one-of-a-kind example of the total unity of the creators of cinema and the people. Filmed in the evacuation of the film. And what kind of frozen reality would not have seemed in the frame, in reality, the shooting took place in Turkmenistan! In the sun and heat in 45 degrees! Ukrainian village was built on the territory of the stadium in Ashgabat. Snow was replaced by downy and biker blankets, salt, sulphate and mothballs, and local glassmakers created hundreds of icicles. Needless to say, wrapped in sheepskin coats and fur shawls, the actors fell from their feet from heat strokes, but this was not the most difficult during the filming. These are just technical details and descriptions of harsh conditions, which are now so fond of listing in TV shows and magazine articles, to blow out of empty movie stars something more than a major-licked “glamor”. 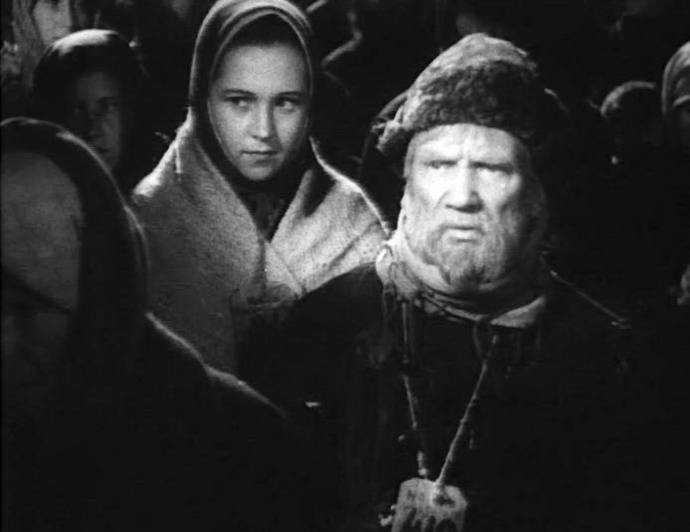 In the case of "Rainbow" is not required. Actress Elena Tyapkina, who plays Fedosi, sees the body of a son killed by the occupiers in the frame. But she doesn’t need to play at all, since Elena herself, shortly before the shootings, received a “burial” for her son Gleb, who volunteered for the front. Friends discouraged her from this role, quite reasonably believing that Elena would not mentally endure this agony. But she agreed with only one condition - no rehearsals and second duplicates - she simply could not. In the most terrible moments, when the actress was ready to quit, Mark Donskoy repeated the magic word of that era (now thoroughly forgotten) - “it is necessary”. And this “necessary” was not creative growth, as people so often say from this work is very distant, not a career, but to the people, home front workers and soldiers at the front. So that everyone can feel that there is somewhere a completely unknown and alien village to him, in which the same unfamiliar Fedosya lives, but she is waiting for the liberator warrior, thinks about him, and this brings people together.

Anton Dunaisky, who plays the role of Okhapka’s grandfather, was supposed to act during the trial of the Nazi leader. What forces it cost the Danube is difficult to imagine, because the whole acting group knew that Anton's family had been driven to Germany. And this unfortunate man on the eve of his 50 anniversary was totally alone. The Germans deprived him of all his relatives. 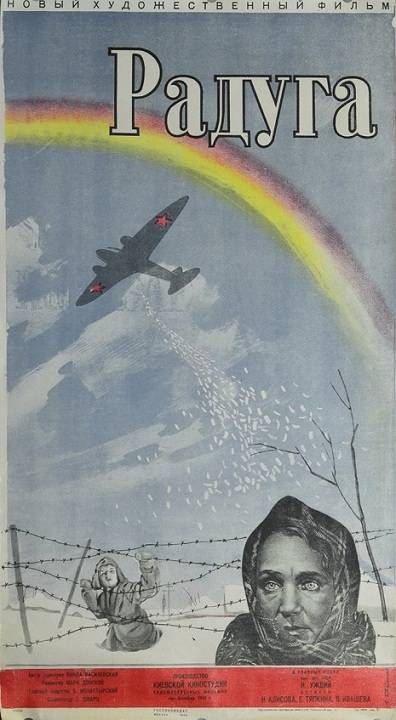 Mark Semenovich himself was able to achieve a kind of business trip to the newly liberated villages of the Moscow region before the start of filming. Donskoy talked with residents, got acquainted with the monstrous occupational conditions in which citizens were forced to live, who did not have time to evacuate or simply did not have such an opportunity. These were not just "impressions." Later, in his memoirs, the director admitted that the authors of some monologues in the film were not Wanda Vasilevskaya, on the basis of the story of the same name which they shot “Rainbow”, and not even Donskoy himself. Mark simply transferred to the screen the words of those peasants whom he met in the looted and burned villages of the Moscow region.

One of the first reviewers of "Rainbow" was the supreme commander Joseph Stalin. After watching, he personally called Donskoy. The highest praise was not even the congratulations of the steel leader of the peoples, but his conviction that the painting “would help in the struggle of the Soviet people against the fascist German invaders” (a phrase from the memoirs of Mark Donskoy).

This review has become such a powerful start in life for “Rainbow” that it was shown on the front lines, and at factories, in distant villages and collective farms. In fact, wherever it was possible to place a movie projector. Soon the picture jumped even across the ocean to our, then still, allies. After the film show at the White House, Franklin Roosevelt sent a telegram to Moscow stating that this film would be shown to the American people "in all its greatness." This in itself is a unique phenomenon, since foreign films in the United States are not taken to be translated - they are allowed to rent with subtitles. And the American man in the street, mostly educated with “comic book” thinking, is very lazy and watches films with subtitles with great reluctance. Those. Roosevelt had to personally assist in the rental of the Rainbow. 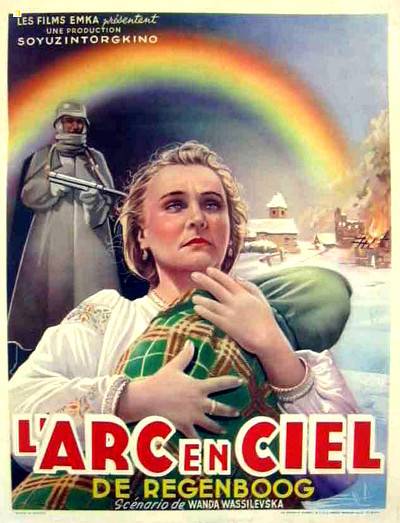 The picture was a great success, but was forgotten years after the war. This is doubly insulting, because making a film of the same power that can convey what our compatriots of that era lived is almost impossible. Krivoruk directors of various “Matilds” and “Stalingrads” will not be able to do this, which is creatively poor and historically illiterate. And who will play? Actress and beauty Elizabeth Boyarskaya, who is an actress, because Boyars, and beautiful, because Elizabeth, and not Stepan? Daniel Kozlovsky, from which from the screen blows advertising French perfume, even in the role of the old Russian prince? And therefore, as long as there is a tendency in which creatively strong patriotic films are not only not fashionable, they are also subjected to harassment (that the memory of the premiere of “28 Panfilov’s”) is not expected to change. Watch a good movie.

Ctrl Enter
Noticed oshЫbku Highlight text and press. Ctrl + Enter
We are
Reports from the militia of New Russia for 27-28 September 2014 of the yearResults of the week. "Well, do not change me because of every idiot!"
Military Reviewin Yandex News
Military Reviewin Google News
17 comments
Information
Dear reader, to leave comments on the publication, you must sign in.