March 22 2018
440
So, once again we congratulate everyone on the fact that a new stage has begun in our life. Another time has come for opening the cesspools of our political elite. The time of "sensational discoveries" for the media has ended. The time of the circus on TV called “candidate debate” is over. Bacchanalia ended under a beautiful name "election campaign." 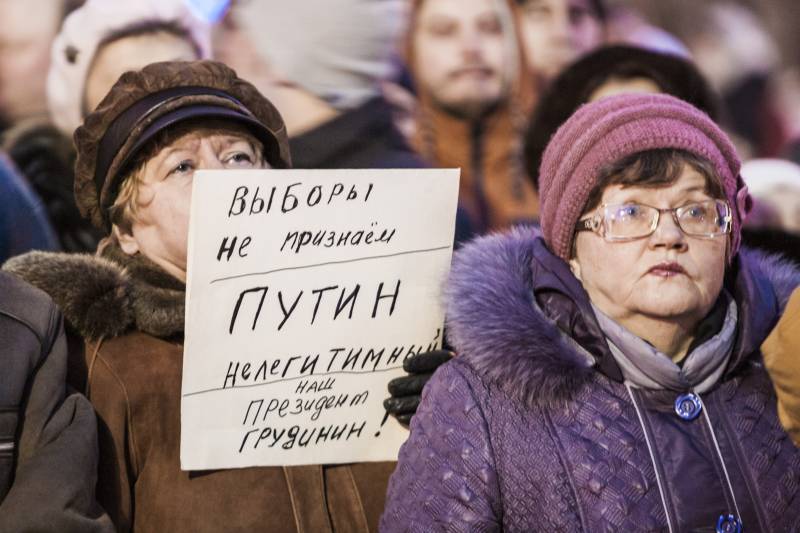 Stunned by all this spectacle and trash, the people went to the polls together and gave their vote to those whom they considered the most worthy leader for themselves. How did you go - the second question. Someone - at the call of the heart. Someone - according to the habit that had been established in Soviet times. Someone - at the urgent "request" of the enterprise or military unit.

Actually, any way is good, if not against the law.

Two days passed, and a cohort of Putin’s opponents, stunned by success, began to come to their senses. Appeared the first forecasts of further developments.

And there was a certain split effect. No personality, thank God, and not consciousness. But some feeling that everything is wrong, there is a place to be. Depending on what channel to include or what site to go to.

For clever uncles and aunts from the TV and other media explain to the inhabitant all the charm (vileness) of the result obtained at the elections.

A satisfied (disgruntled) elector looks at the voting results with satisfaction (bitterness). Vladimir Putin’s huge separation from the second candidate, Pavel Grudinin, and the completely ridiculous results of the others seemed to show the situation in the country.

And whose victory is it? People? The current government? Putin personally? What political and economic line does the president hold today? Who is mom and dad?

Alas, this is not a victory for the people, but for the officials. Those most hated bureaucrats, at the mention of which most ordinary people begin to deteriorate their mood. Those who, a priori, together with their appointment to office, receive the title of enemy of the common people.

Where are such conclusions from? From life. From what everyone knows, but few go beyond knowledge.

Remember the autumn and winter of the year 2017. The country's position in the international arena is being strengthened. We are starting to influence international events. We are active in Syria. We show teeth to opponents. And at the same time, this is our behavior disgusting effect on each of us.

Sanctions, which we, according to numerous statements by politicians and economists, more good than harm, contribute to the rapid weight loss of our wallet. It becomes more difficult for each concrete person to live.

And at the same time, we act exactly according to the same principle that we once heard from our grandmother. "We will endure, if only there was no war ..."

No, you really can suffer? Can. We are proud to talk about our army. We respect the resolute president. We like to be independent and strong.

Someone doubted Vladimir Putin’s election victory? Someone, even one of those who dared to go to the race for the chair next to him, hoped to be at least close at the finish? All solved their own problems. And, paradoxically, the tasks of Putin.

What was the task? And it is obvious. Make the electorate come to the polls. At any price. To force. The mere fact that there is no alternative for the current president, for many, was the main criterion for participation in elections. What for?

A huge number of presidential supporters would simply ignore the elections. And add to them those who, knowing that among the candidates there is no one who will suit them personally, would not go to the polls? But there are also those who are physically unable to vote because of a fairly complex system of changing the site or just laziness?

Meanwhile, in order to show the whole world a fig, it was necessary to have a figure not in 30-35% of the total number of voters at the ballot boxes. I needed a digit.

The NUMBER needed just such ... So that the rest of the world would understand that we are united in rows, understanding and accepting, making a choice and ... And further on in the text in the same spirit.

Remember the appearance on television candidate Sobchak? This is the end of the race, she began to follow the words. Really a little turning from a scandalous TV presenter into politics. She, after all, occupied exactly that niche that has been a headache for political technologists for many years. Against all!

Communist party? Liberal party? Rights? You did not notice that they are already uninteresting to the majority? Nostalgia for the USSR? Alas, this is no longer an argument. Reforming on the western model? We remember these reforms and the very program "500 days" ... Yes, yes, the very Yavlinsky! Nationalist internationalists? Ridiculous.

But they all said the same thing. Come and vote for us, against the existing government and the current president! But any student knows this technology. Older people need to clarify, and the boy or girl at the computer is not necessary! Likes and dislikes increase views! No matter how you vote, you vote!

There is an opinion that such elections and such support for Putin by the people will provide him with the opportunity to embark on unpopular reforms.

The myth of democracy is destroyed. More precisely, destroyed. It was easy enough to convince the people. And there are a lot of technologies for this. It remains only to set the task for specialists, and ...

The system that Yeltsin began to build and Putin continued is in effect.

Ideally, there should be one ruling party in the country. Well, actually, it already exists, and the next Duma elections will confirm this (we are sure).

In general, this is normal for Russia.

Monarchy, the communist past - almost 400 years of totalitarian rule, with deviations in one direction or another. Quite to myself.

And nothing, as it were. We lived. And we will live, definitely, yet.

However, in order to observe the appearance of this democracy itself, one must still leave at least this appearance.

Mark radicals on both sides and leave only center-left and center-right. Or Republicans and Democrats. Or Labor and Conservatives. The classical two-party system, where in any case the continuity of power will be maintained.

And he, the choice is needed, if in a good way? 400 years lived, as mentioned above, and nothing. Not extinct.

Actually, one candidate in the bulletin (sample of the USSR, China or Russia-2018) is also a choice. "For" - for stability and hereinafter. "Against" - for anarchy, entropy and hereinafter also.

All right, two. Two candidates are quite enough for the whole West to shut up and move away in terms of democracy in our country.

And loafers, freeloaders, just spent OUR money from the budget for their campaigns, you just need to overclock. And, well, who has something to do. Titov, Baburin, Grudinin. But Yavlinsky, Zhirinovsky, Zyuganov - everything, to retire according to age. Not yet raised qualifications.

Leave one Suraykina. Anyway, nothing really can do anything, so let the opposition. Single candidate from all who are against.

What's wrong with the alignment? And, most importantly, some savings!

Or maybe even go to the American model? And in the future in general from the people refuse the election? Why? Electors from regions or members of the Federation Council elect a president, and we elect electors.

But no one is distracted from more important and urgent matters. And the result does not suffer - the most important thing.

Ctrl Enter
Noticed oshЫbku Highlight text and press. Ctrl + Enter
We are
Reports from the militia of New Russia for 27-28 September 2014 of the yearYuri Drozdov: Russia prepared the role of the sacrificial calf
Military Reviewin Yandex News
Military Reviewin Google News
440 comments
Information
Dear reader, to leave comments on the publication, you must sign in.