The CAA stopped the militant counterstrike in Eastern Gute. The liquidation of terrorists continues

March 19 2018
17
In the province of Damascus, local authorities are taking additional measures to provide tens of thousands of refugees who have left the neighborhoods of Eastern Guta occupied by terrorists. At the moment, there are two refugee camps in the province, but with the increasing flow of opportunities these camps are almost not enough.


Against this background, the militants are making desperate attempts to prevent the civilians from leaving Eastern Guta. Without a “human shield” of civilians, militants lose their ability to confront Syrian government forces. 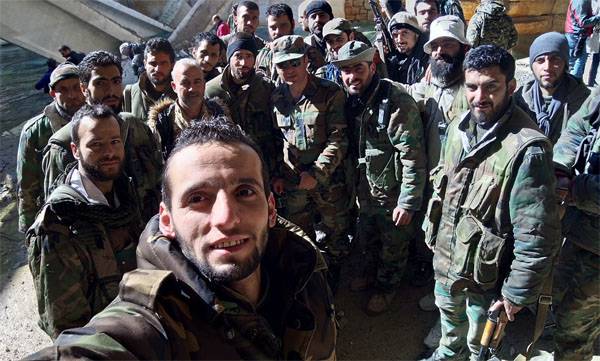 In one of the regions of Eastern Guti, a group of several hundred terrorists attempted to launch a counterattack on the positions of the Syrian troops. The main purpose of the strike was to take control of the route along which supply had previously reached the militants. The terrorist counterattack eventually failed. As previously failed Western provocation with the use of chemical weapons.

Today, in Eastern Ghouta, militants have been cut into 4-5 into relatively small groups that are virtually unable to communicate with each other.

Against this background, there are reports that three helicopters of the American coalition have once again taken out representatives of the top of the ISIS command (* prohibited in the Russian Federation) from the city of Kamyshly. It is reported news agency SANA. The leaders of the terrorists were transported to an unknown destination. According to some reports, there was a threat of an ISIL remnant * in the north-east of the SAR with Kurdish militia.

Ctrl Enter
Noticed oshЫbku Highlight text and press. Ctrl + Enter
We are
A coalition led by the United States is preparing a hybrid strike on Syria. "Green berets" seen in the "el-Babskiy bridgehead"Reports from the militia of New Russia for 27-28 September 2014 of the year
Military Reviewin Yandex News
Military Reviewin Google News
17 comments
Information
Dear reader, to leave comments on the publication, you must sign in.