Vuchich hands over Kosovo for a European carrot for a donkey

March 20 2018
50
After meeting with US Assistant Secretary of State Wes Mitchell in Belgrade, Serbian President Alexander Vucic announced that the issue of Kosovo is an obstacle to Serbia to Europe, and therefore the country is ready to discuss possible compromises. 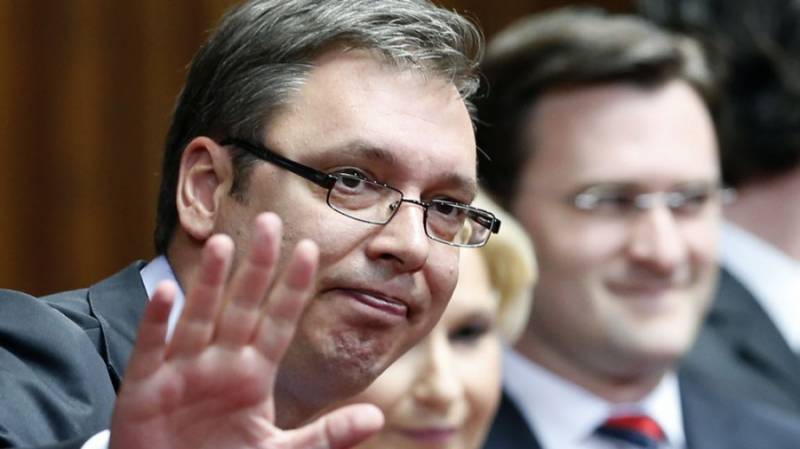 “No matter how small and insignificant for great powers Serbia is, it can accept a compromise solution, but it cannot accept the humiliation of its own people and the self-destruction of its own state,” Vučić declared with pathos.

However, the idea that such a humiliation of the Serbian president is very peculiar. He began to warmly thank the American ... for his support in the need to continue negotiations between Belgrade and Pristina under the auspices of Brussels. And also for the “shown patience” with which he listened to the position of the Serbs, despite the fact that it differs from the opinion of Pristina.

If we consider that Mitchell came to Belgrade from Kosovo, where he announced that the Kosovo Security Forces would be transformed into an “army of the Republic of Kosovo”, and no one has the right to object to this, then Vucic's words about being unwilling to accept humiliation sound rather strange.

Recall that Belgrade and the Serbian Serb party in Kosovo, the “Serbian list”, are speaking out, or rather, opposed such transformation of the armed formations of Kosovo separatists. And representatives of the United States previously said that the question of creating an army of the "Republic of Kosovo" could only be resolved with the consent of all national minorities of the region. Now the representative of the State Department refuses his guarantees, and the head of Serbia thanks him for that!

In turn, Wes Mitchell confirmed that the US supports the extension of the dialogue between Belgrade and Pristina. “We want one comprehensive solution for Kosovo to be found. As I understand it, this is the goal of the “internal dialogue” initiated by President Vucic. We are ready to listen and help, ”said Mitchell, quite definitely making it clear that he expects a“ comprehensive solution for Kosovo ”from Belgrade.

Recall that the “internal dialogue” announced by Vucic is nothing but the preparation of the Serbian society for the surrender of Kosovo, in which case, according to the President, “All the ways of political cooperation and economic prosperity would open up to Serbia. EU gates too. Otherwise, we will save the conflict, the meaning of which we ourselves do not understand. ”

Now about the compromises. We are not talking about compromises, but about unilateral (from Serbia) concessions, and a complete surrender of positions.

What, in fact, recognizes and Vucic. “If they wanted to fulfill their part of the agreements, they would have done so within five years from the moment they were signed, but they didn’t hit the finger. I am sure that they do not intend to do anything, since they have received the tacit agreement of the majority of the international community, ”said the head of Serbia about the behavior of Pristina.

On the other hand, the Serbian leadership removed the police, the court, civil defense, all state bodies, that is, violated sovereignty and territorial integrity from Kosovo, having committed an act of high treason.

Vucic makes it clear to the Serbs (not yet saying it directly) that giving up Kosovo is a necessary price for moving along the European path. How much this “road tax” is acceptable, to judge, of course, the Serbs.

However, there is every reason to believe that this “European way” will lead Serbia to nowhere.

In January 2018 of the year, European Commissioner Johannes Hahn, in charge of EU membership applications, told Reuters that Serbia and Montenegro may become full members of the EU in 2025. “We set 2025 as a tentative date for Serbia and Montenegro, which is realistic and also very ambitious,” the official said.

However, experts do not share this “optimism”, believing that the chances of the countries of the “Western Balkans” are negligible. As EU politicians, faced with growing Euroskepticism, the eurozone crisis of 2009-2013 and the UK vote on Brexit, have lost interest in potential new members of the Union.

So, Le Monde, arguing about the prospects of the six Balkan countries for European integration, stated that if Serbia, Montenegro, Macedonia, Bosnia and Herzegovina, Albania and unrecognized Kosovo manage to ensure economic growth in 6 percent annually, they will be able to approach the EU average only for 2030 year. And if we consider that they will not be able to achieve such growth, then the probability of their entry into the European Union in the first half of this century tends to zero.

In addition, the countries of Old Europe view the Western Balkans as a source of crime and illegal migration. First of all, this refers to Albania and Kosovo, who introduced Europe to Islamic extremism, and also almost monopolized in it the drug trafficking and illegal prostitution.

But at the same time, Brussels demands from these countries for the right to be registered as an applicant for EU membership, meeting a multitude of requirements, including extremely unpleasant and burdensome ones.

Such, in addition to the rejection of Kosovo, Serbia must provide its territory to accommodate migrants from the Maghreb and the Middle East. As once the Serbian province was settled by Albanians.

However, the whole история Serbian “European integration” is a complete chain of betrayals of the interests of Serbia, its people, endless concessions on the part of the Belgrade authorities, and the failure to fulfill promises - on the part of Brussels.

EU membership has become a kind of carrot, which is hung in front of a donkey's nose, so that he can run after her, pulling a cart.

It is unlikely that Vucic and his supporters in the power structures do not understand this. And most likely, they are committing treason to their country, pursue a much more realistic, and, say, more personal goals than the country's membership in the EU.

But the whole horror, the whole tragedy of the situation lies in the fact that those who pay for the services of traitors, seek to destroy Serbia and its people. And I must say that they are seriously closer to solving this problem.

Ctrl Enter
Noticed oshЫbku Highlight text and press. Ctrl + Enter
We are
Situational analysis of the death of the MH17 flight (Malaysian Boeing 777), made on the basis of engineering analysis from 15.08.2014Results of the week. “I am a prince! What I want - and I turn back ... uh ... I act in the interests of the state "
Military Reviewin Yandex News
Military Reviewin Google News
50 comments
Information
Dear reader, to leave comments on the publication, you must sign in.