Project "ZZ". The Mystery of the Russian Elections Revealed: The Kremlin Will Guide Grudinin to Fight Poverty

March 7 2018
372
Putin decided to revive the Russian economy, but he has no chance. Last year, the economy grew by 1%, and the real incomes of the population declined even more. By propaganda, the economy will not be lifted, foreign experts ironically and suggest that the Kremlin will soon take non-standard steps, and it will agree with the opposition. Putin will start working with Grudinin, who will help the Kremlin fight poverty. Meanwhile, Yavlinsky will contribute to attracting investment from abroad. And the people will heal richly! 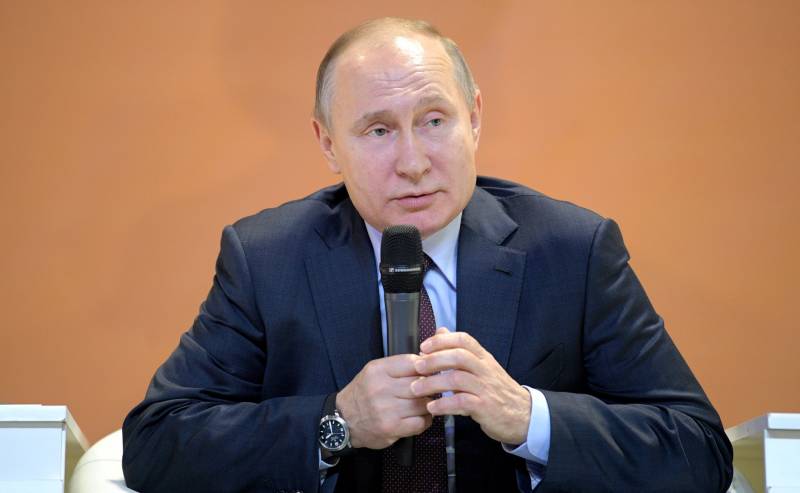 Vladimir Putin decided to “revive the economy”, which he told about in his message to the Federal Assembly on the eve of the elections, Tomoy Ogawa writes in the newspaper Nihon Keijai (Japan; the source of translation is "InoSMI").

The goal of Putin, the author believes, is to increase popular turnout at the elections.

In his speech, Putin expressed his intention to revitalize the economy: expand investment in infrastructure and take other measures.

However, as Tomoyo Ogawa points out, last year the growth of the Russian economy was only one percent, and the real disposable incomes of the population declined.

The emphasis in Putin’s speech on domestic policy consisted of theses on increasing revenues, reducing the number of poor, and so on. Putin believes that the growth of a stalled economy will be provided with technological innovations.

8 candidates will participate in the presidential election. According to the latest VTsIOM, Putin’s rating is 69,5%. Other candidates are far behind.

At the same time, the opposition is a real hindrance to Putin in his re-election, and therefore he is apparently ready to take non-standard steps and come to an agreement with the leaders of the opposition. Even the fight against poverty in impoverished Russia will be ... the opposition, namely Grudinin. This is written by very serious uncles: experts from the brain trust "Stratfor".

No, Stratfor has no doubt that Vladimir Putin will win the election and receive the “fourth term of office”. This, they believe, will happen "almost certainly." But at the same time, Putin "will face key challenges." Especially it will be hampered by demographic and economic problems. And they will force him to plan long-term reforms.

The difficulties that Russia will face in the new Putin's term will lead to the fact that "the opposition factions will become important". The Kremlin will no longer be able to ignore their views. And the government will form "new relations with some opposition groups." The most influential of them will be an outlet for "relieving tension" from the "dissatisfied population."

After nearly two decades of power, the current head of state enjoys considerable support among the people, analysts continue. Most public opinion polls "give" him at least from 40 to 60 percent of the vote.

However, today it is already obvious: not everything goes according to the plan of the Kremlin. There is social tension, poverty is growing, the government in Moscow is faced with "a multitude of problems whose solutions cannot be found in shrill patriotic balancing act or propaganda."

Oppositional views on politics support more and more people, and the influence of these views is growing stronger. And Putin after the “last coronation” will have no choice but to solve both “problems at home” and “problems abroad”. And they will probably have to be solved together with the opposition.

Further, the experts dwell on the main problems of Russia, which Putin and the opposition "groups" will solve. Briefly retell these problems.

Generation change is the demographic factor number two in modern Russia. Almost a third of Russians were born after the collapse of the Soviet Union, and the generation that has reached full legal age today does not know a single national leader except Putin. The new generation lives in a relatively prosperous and stable Russia. Young people have online access to information that goes beyond state media. And the majority of Russian young people (both teenagers and those who are about 20 years old) want “changes on the political scene,” experts are sure. Increasingly, these young people are protesting. This distinguishes the situation from previous protests, in which people went "much older."

Another major issue that the Kremlin will have to decide is a stagnant economy. In 2014 — 2017 Russia plunged into recession due to low oil prices, Western sanctions and cuts in industrial production, the authors of the material report. What was the reaction of the government? Moscow has raised nationalist sentiment in the country, annexing the Crimea peninsula to the Russian Federation. In addition, Moscow "was supposed to send soldiers to the east of Ukraine in the 2014 year." Then, in 2015, a “military intervention in Syria” was arranged. The last two military campaigns "did not produce any tangible results." And in Russia there is a growing disapproval of these “foreign adventures”. Instead of slogans about “victories,” people want to boost the economy.

Impoverishment, low pensions and salaries are the main problems for many voters. Poverty is growing at a fast pace, faster than from the 1998 year: in the last three years, about 5 of millions of Russians have fallen into the poverty line. Half of the country's citizens know firsthand about salary cuts or payment delays. Pensioners are worried about the fact that the Kremlin “launched a hand” to the Pension Fund.

The approval ratings of the Russian leadership began to fall. Some opposition groups urge the electorate to "stay at home", that is, not to vote. Yes, in the Kremlin they are not at all afraid that someone else can win, not Putin. However, a low turnout would cast a shadow over his presidency and undermine the legitimacy of his power in the eyes of citizens, the elite and the government itself.

And the Kremlin launched a campaign to “revitalize” election battles. It was announced, “Stratfor” writes, about rock concerts at key polling stations, about holding fairs, distributing cash and prizes (“cash and prizes”). All this is "typical Kremlin instruments." In addition, unlike in previous years, when the same people “decorated” the campaign and the bulletins, the authorities shook the political landscape by launching “many influential candidates” onto the electoral stage. But it is precisely this tactic that has ensured the growth of political discourse that in the future will change the management of the Kremlin by “opposition factions”. Creating a constructive opposition is how analysts see the next political stage in Russia.

The significance of the Russian opposition lies in whether it acts within the system, or outside it, experts say.

The first part of the opposition consists of parliamentary parties: the Communists, the Liberal Democratic Party of Russia and Fair Russia. These "oppositionists" rarely dispute the status quo of the pro-Putin United Russia, indicates Stratfor.

But the non-systemic opposition usually shows its antagonism towards Putin clearly. These opponents of Putin are working on the periphery of Russian politics. In recent years, anti-corruption agitator Alexei Navalny is proud of his place in this second group. Approximately the same place is occupied today by the liberal party "Yabloko".

The opposition’s ideological debates have risen to a level that the Kremlin can no longer ignore. So, the Kremlin is trying to develop a strategy of "liberation from pressure" caused by widespread public discontent. Experts believe that the Kremlin will turn both systemic and non-systemic opposition into the so-called "constructive" opposition: these opponents "will work with the Kremlin" and even form a policy for the Russians.

“Stratfor” considers Pavel Grudinina to be one of the main figures who challenged Putin. 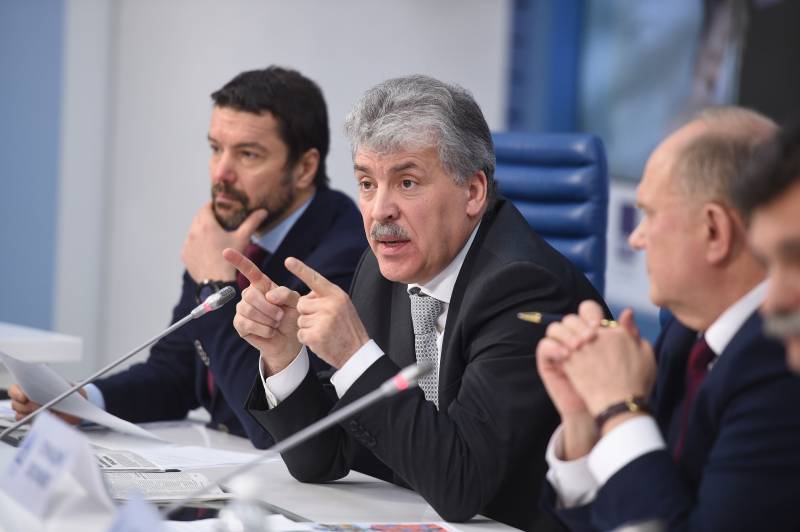 Grudinin managed to reach the widest circles of the population. He manages the "collective" enterprise and at the same time highly values ​​"Soviet ideals and capitalist business ethics." Gudinin pays people high wages, thus appreciating the results of their workers.

There were suggestions that the Kremlin allegedly previously "approved Grudinin's candidacy" in order to encourage the residents of the Moscow region to come to a vote. However, in recent weeks, the Kremlin seems to have changed its attitude towards Grudinin, especially after a survey by Vesti radio showed his great support among the people. Of course, this survey cannot be considered representative. However, this is still a cause for Kremlin concern. And in recent weeks Grudinin has become the object of a campaign “supported by the state,” analysts say. The campaign against Grudinin "revealed his foreign assets, although he refused them when he registered as a candidate." And his face grew dull.

Yavlinsky spoke earlier about changing Moscow’s approach to Ukraine and the need to soften relations with the West in order to attract investors and international capital to the country.

Grudinin could help the Kremlin in developing reforms in the pension sphere, as well as in the fight against poverty.

The findings are very interesting. It seems that in the brain trust it is believed that the Kremlin is not able either to strengthen the economy or to overcome the growth of poverty. Where does such confidence from Stratfor come from? Experts are probably skeptical about Putin's economy, which for almost two decades has demonstrated a high dependence on mineral prices, as well as the inability to live self-sufficiently, with the result that the country's economy is constantly threatened with stagnation: the West has enough sanctions to be included. In addition, the long-standing thesis of Western analysts is the lack of structural reforms in Russia, which repels foreign investors.

Hence the conclusion that can be considered both serious and ironic. There seems to be no one in the entire Kremlin who could raise the national economy and smooth out social tensions. And that's why the Kremlin will invite Grudinin and Yavlinsky to the role of specialists. Two of these comrades will eliminate poverty in Russia, attract foreign investment from abroad, adjust the pension system and increase the growth rate of the Russian economy. As a result, the electorate will be satisfied, the opposition will be driven into a stall, and Putin will continue to rule happy people.

Ctrl Enter
Noticed oshЫbku Highlight text and press. Ctrl + Enter
We are
Project "ZZ". "Communist" and "dreamer" against the "king"Yavlinsky is dreaming of victory over Putin, or Yabloko on a slice
Military Reviewin Yandex News
Military Reviewin Google News
372 comments
Information
Dear reader, to leave comments on the publication, you must sign in.