In Russia, almost everyone loves the USSR: a new American discovery

March 5 2018
207
It turns out that not only Comrade. Putin regrets the collapse of the USSR. Millions of Russian citizens also yearn for the lost Soviet country. This was written by the leading American newspaper. 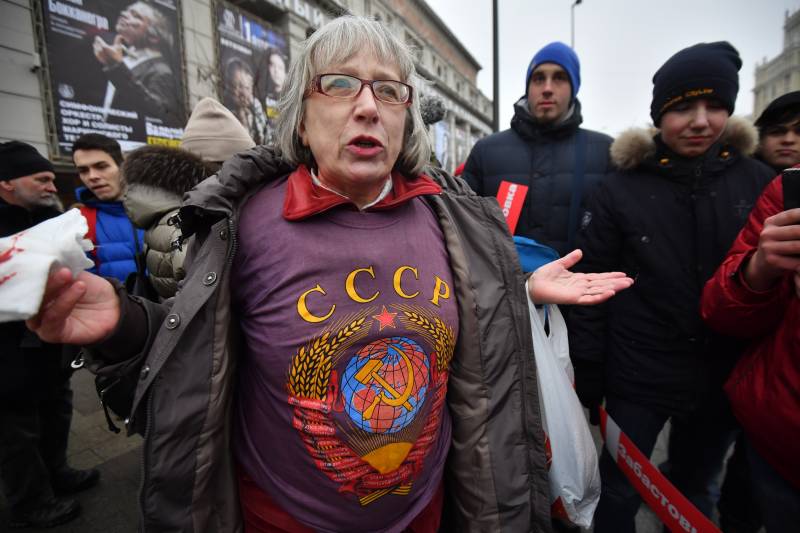 The Washington Post reports: More than one Putin regrets about the collapse of the Soviet Union, many Russian citizens also want it.

At the Kaliningrad forum, reminds the edition, President Putin confessed: if he had the opportunity to change history, he would have prevented the collapse of the USSR. In Russia, many people share the opinion of the president, cites the opinion of the publication "InoTV".

Putin’s statement about the collapse of the USSR, which affected Eastern Europe and beyond, was made at a forum in Kaliningrad. The Russian leader said bluntly that he would like to prevent one event in national history, and this is “the collapse of the Soviet Union.”

"The Washington Post" notes that in the West, this idea "looks marginal." However, in Russia everything is different: there is nothing unusual in the fact that there they regret the collapse of the USSR, no. And a similar regret among Russians is “everywhere”.

The newspaper cites data from Russian sociological polls on a relevant topic. Levada Center has long been conducting polls about the attitude of Russians to this historical event (since 1992).

According to the latest data, today 58% of Russian citizens regret the collapse of the USSR. Just over 25% - no regrets.

The “pro-Soviet” sentiments of the masses reached a peak in 2000, just when Putin came to power. That year, 75% of the inhabitants of Russia “regretted” about the breakup of the Union.

Popular sentiments associated with the collapse of the USSR are not limited to purely historical regrets. Surveys of the Levada Center show that the majority of Russian citizens are distressed by the disappearance of a single economic system. The smaller group is concerned that Russia is no longer a superpower, what was the Union.

We note that the mood of the people who regretted the loss of the USSR to the USSR can be explained by something else. Together with the breakaway of the republics and the collapse of the communist idea in Eastern Europe, the cold war of the USSR with the West ended. It is believed that the USSR lost outright, having broken up into territorial pieces, immediately plunged into economic, social and political crises. The latter almost immediately, in the 1990s, caused melancholy for stable Soviet times, for the very "stagnation" that prevailed at comrade. Brezhnev. And this longing did not pass to this day.

No matter how hard Putin is about “stability” and right there about “stability,” there is no stability in Russia. The ruble eats up infinitely, goods are getting more expensive, citizens are getting poorer, the country has turned into a raw semi-colony of the West - the budget is almost half full of revenues associated with the sale of raw materials abroad, and it’s even scary to imagine what would happen with such a budget if oil prices fall to 20 for the barrel. The economic situation of the country is unstable, technologically, Russia lags far behind the leading countries of the West, and also lags behind the rising China. Hence the understandable national regrets about the USSR, which knew how to be self-sufficient.