March 11 2018
41
War 1914 - 1918 - difficult period in stories fortresses. And not all fortresses adequately passed this severe examination - both on the Western and Eastern fronts. But among them was one fortress, which was almost abolished and outdated, but three times during the war, played an important strategic role - it was called Ivangorod.


The beginning of the creation of the fortress Ivangorod dates back to the 40-th years of the XIXth century - that is, to the era of smooth-bore artillery, when defenses were built of brick. In the 90-ies of the same century, under the influence of increased artillery and the appearance in the arsenal of the last so-called high-explosive bombs (that is, shells with a strong explosive charge), the fortress was seriously upgraded.

Ivangorod was the frontier fortress of the so-called. military nature (i.e., without civilian population) and was located in four transitions from the Austrian border. The fortress was a junction of railways going to Warsaw, Radom, Lublin and Brest - and locked both the Privisly railway and the railway going from the Austrian border to Brest. In addition, located on both banks of the Vistula River, a kilometer from the confluence of the r. Veprzh, the fortress was also a double bridgehead guarding the middle course of the river. Vistula from the attempts of the advancing enemy to cross to the other side. At the same time, Ivangorod allowed the Russian command to safely transfer considerable forces across the river. This, in fact, was the key meaning of Ivangorod.

In the year of 1909, when it was decided to change the overall defense plan on our western border and in connection with this to abolish some of the fortresses, Ivangorod was among the latter. But then, in 1911, Ivangorod was supposed not only to be left, but also to be expanded, turning it into a large and modern fortress. In subsequent years, the views did not change the value of this fortress and, eventually, by the beginning of World War I, this fortress was preserved, but in its old, obsolete form - with the old 7, only partially modernized forts that were removed from the center of the fortress on average on 3,5 km.

The first maneuverable operations of the First World War, which broke out at the Advanced Theater, showed the need to firmly hold the Ivangorod fortress. By 15 August 1914, the fortress was brought to full alert and ready to fulfill the task set by the command of the South-Western Front: “to defend the permanent and temporary crossings across the r. Wisla by all means. "

To accomplish this task, the acting commandant of the fortress, Colonel A.V. Schwarz, had to give the main attention to the defense of the left bank of the r. Wisla, ie, the southwestern sector of the fortress. It was no coincidence - because on this side there were three forts of outdated design, removed from the crossings only on 3,5 km (which did not closely correspond to the enemy’s range, not only siege, but even heavy field artillery). In this sector, the main line of defense had to be transferred to the line of the village of Loe-Secekhov-Volya-Klyashtornna-Zalesie-Oleksov - i.e. 6,5 - 7-km distance from the Vistula crossings. A number of temporary and field fortifications were created, powerful artificial obstacles in the form of wire nets, water ditches and land mines were organized. In addition, on the right bank of the Vistula near the village. Brzese and Golomo were built serf batteries - they could keep the whole area ahead of the line of advanced fortifications under strong cross artillery fire. These activities, in conjunction with the organization of the fortress artillery of mobile 6-inch quick-fire howitzers, significantly increased the sphere of effective influence of the fortress - and led to the fact that the old, modest-sized fortress expanded and was able to perform a serious operational task. 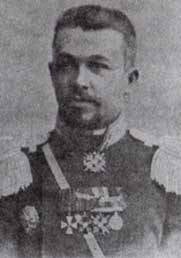 Indeed, during the first months of the war, Ivangorod took an active part in the operations of the Russian 4, 5 and 9 armies. The influence of the fortress during the Lublin operation was particularly fruitful. On the one hand, Ivangorod covered the right flank of our armies. On the other hand, the 2 batteries of 6-inch quick-fire serf howitzers isolated from the composition of their artillery he contributed to the success of Russian troops against the left flank of the Austro-German forces 25 August 1914 by knocking the Austrians from a well-fortified position on the Lazisk-Nezdvu-Opole line -Downer. These batteries, acting then as part of the 18 Army Corps, take part in further battles in Galicia: September 1 near Pnev and September September 2 near Radomysl. Just before the end of the Battle of Galicia, 11, September, they return to the fortress. It was the actions of this division that demonstrated the competent implementation of the principle of interaction between the fortress and the field army - which will manifest itself in further operations of both 1914 and 1915. 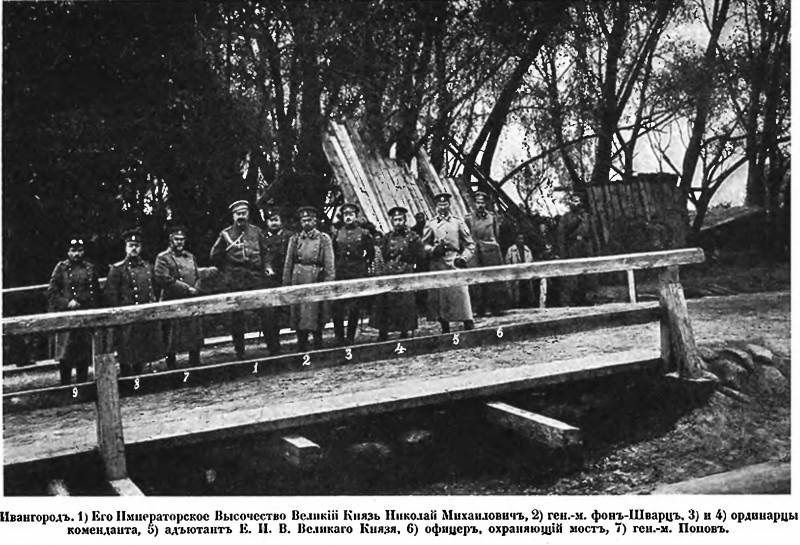 After the 1914 of the Russian 4 and 9 of the armies entered the vigorous offensive at the end of August, the Ivangorod fortress continued to provide all possible assistance to the troops - spreading its influence far beyond the borders of the serf area itself. 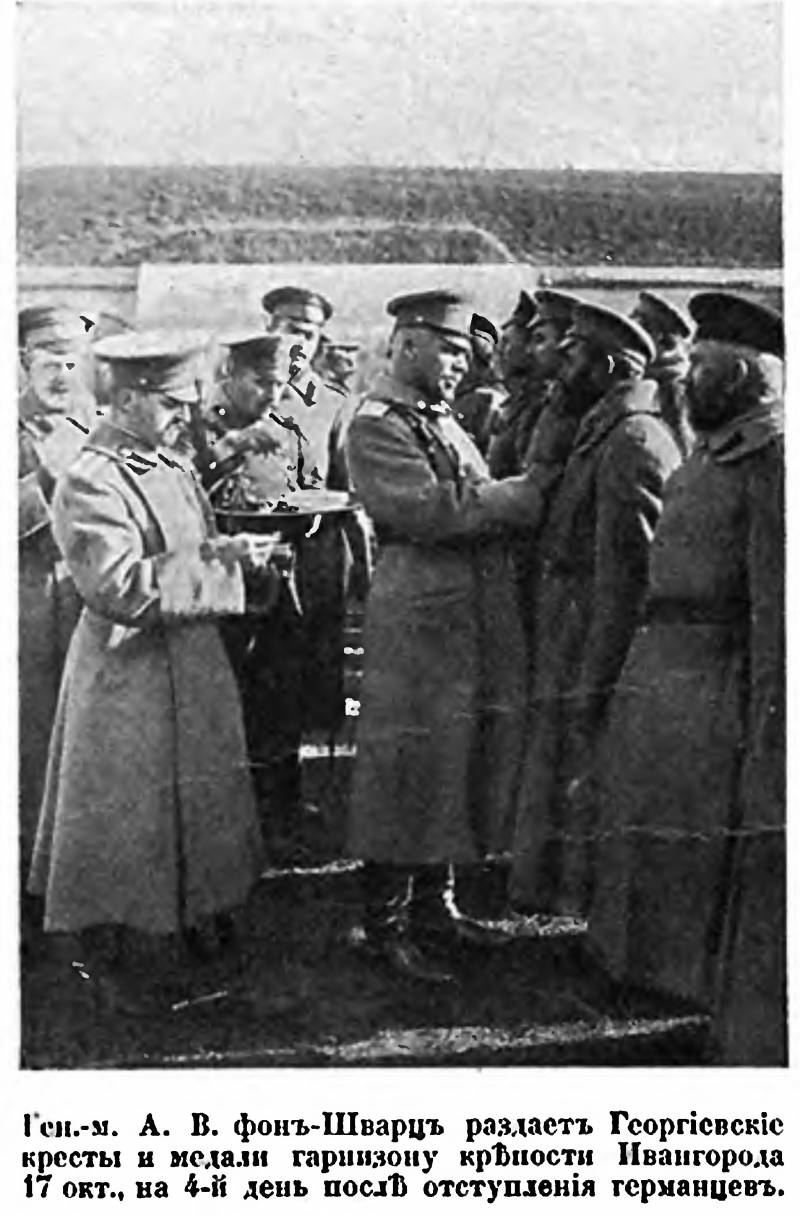 Thus, the fortress played a crucial role in the course of maneuverable military operations. 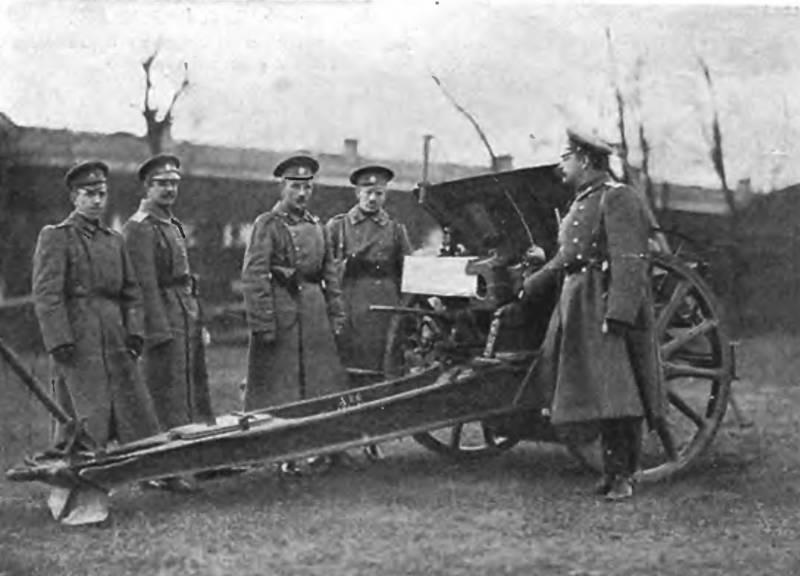 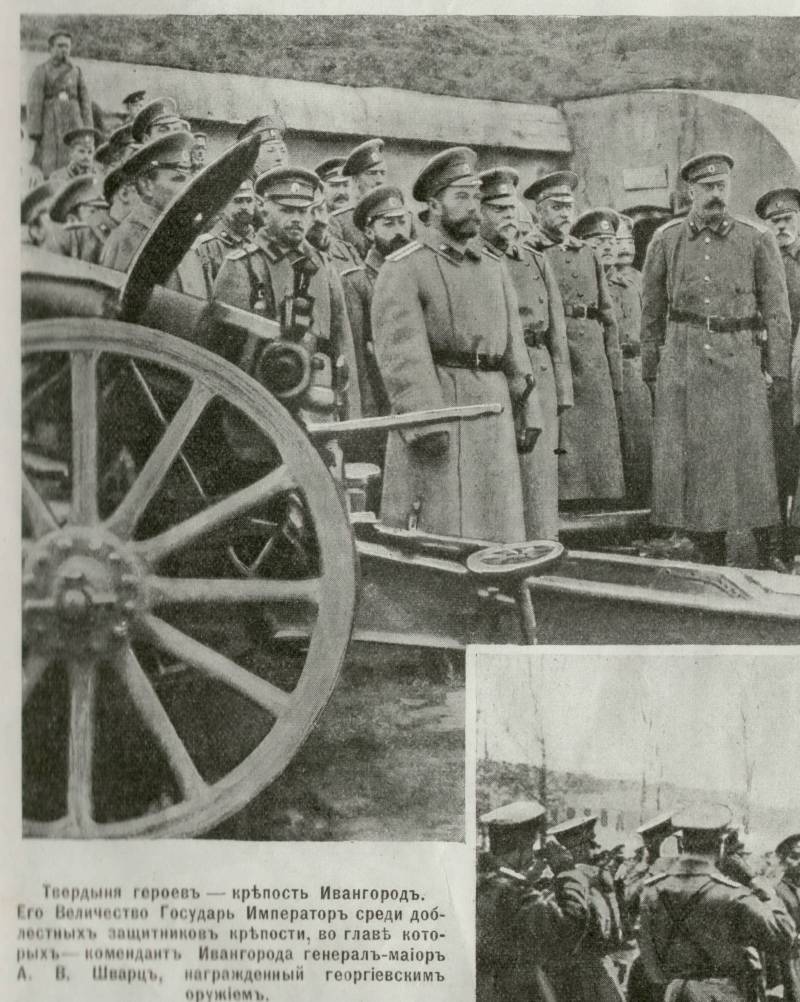 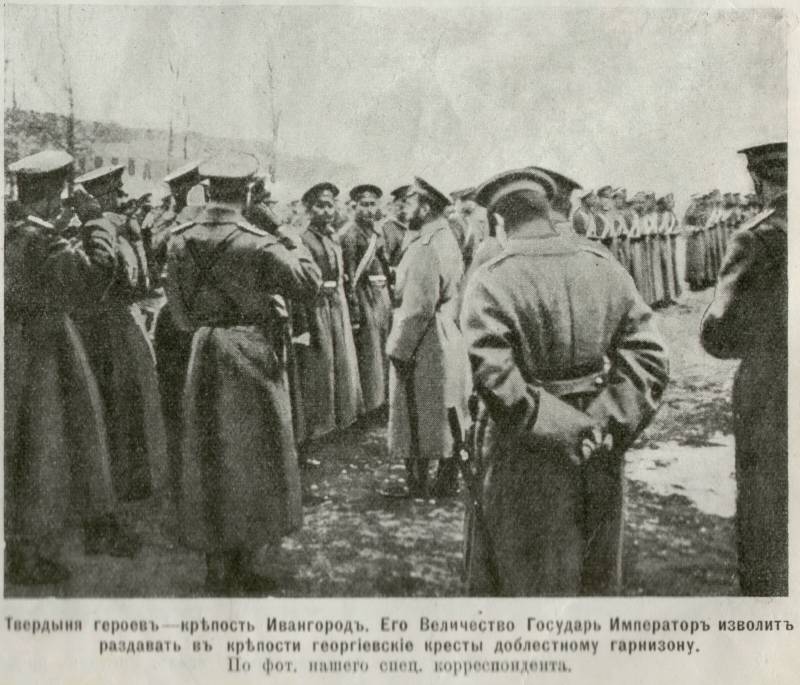 From the second half of October, 1914 and up to 8, July 1915, the enemy provided the fortress with a 9-month “respite” - which the garrison used very productively.

Since the experience of the onset of the Austro-German forces in October 1914 showed that the line of fortifications, rendered on the left bank of the Vistula on 6 - 7,5 km from the crossings, does not sufficiently provide the latter from the impact of enemy artillery, it was necessary to expand the fortress area on the left bank.

The High Command, in connection with the widespread operations of the Russian armies on the left bank of the Vistula after the autumn operations of 1914, at first considered it necessary to create the main serf position as an army position pushed forward from the center of the fortress at 22-23-kilometer distance, along the line Kozenitsa -Profit-Janowitz. Position length is about 60 km. But at the end of February 1915, when work on strengthening the above position was in full swing, the headquarters of the commander-in-chief of the South-Western Front indicated to the commandant that the army position being built in front of the fortress should be dealt with exclusively by field troops. It was stated that for the defense of the fortress during 3 - 6-month term, a garrison (45 - 70 thou. People) was to form a similar position behind the army position.

After long negotiations and disputes between the serfs and the front headquarters, a new serf position was established at the 16-kilometer distance from the crossings - on the line Mozolice-Sloviki-Novo-Bonkovets-Gnevashev-Border. Length - 30 km. The construction of this position started only on 8 in May 1915, and, naturally, it was only temporary by the beginning of the offensive of the enemy (8 July) - defensive structures could withstand only 6 - 8-inch shells of enemy artillery.

During this period, under the fortress of Ivangorod, there were 4 defense lines shown in the diagram, including the first army position, defended exclusively by field troops. 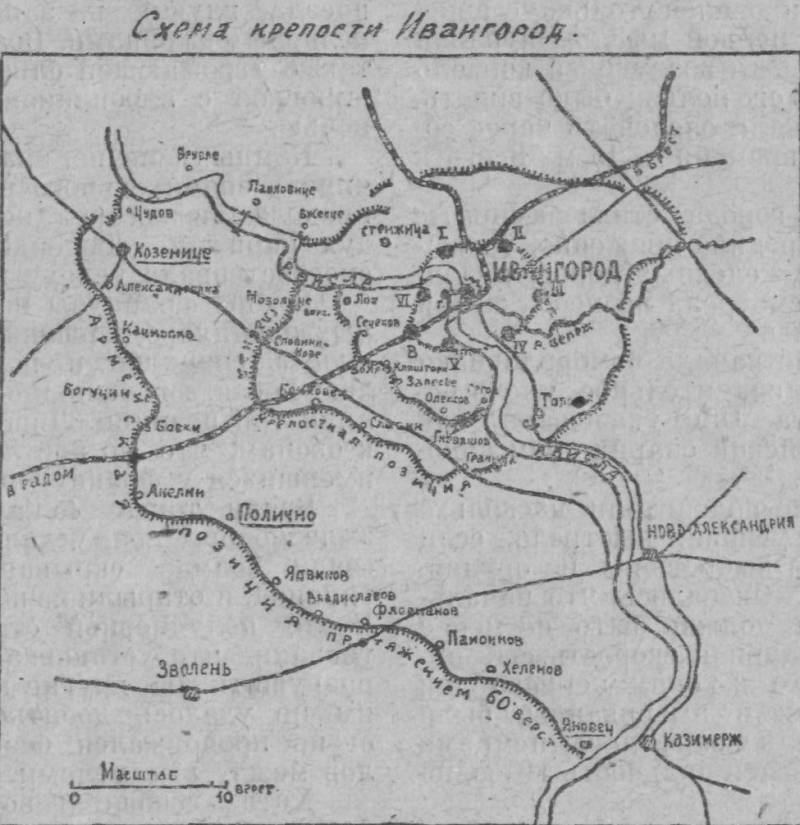 The fighting of this period continued for 2 weeks (from 8 to July 22). On July 6, the enemy broke through the Radomsk positions, and on July 8, the field forces left their advanced army positions on the Kozienica-Polichno-Yanovots line. By the evening of July 8, the retreating field troops were approaching the main fortress position. It was a critical moment for the fortress - but with the help of the skillful measures of the commandant and the valor of the garrison, he was able to overcome it. The fortress allowed to restrain the onslaught of the enemy, allowing the field troops to easily cross over to the other side. The powerful fire of serf batteries and infantry counterattacks forced the enemy to stop at the main fortress position (albeit worn and temporary).

But the general situation in the theater was set up in such a way that the High Command recognized it expedient, using the Ivangorod fortress only to ensure the retreat of Russian troops on the right bank of the Vistula, evacuate its garrison and armament, and to blow up the fortifications - the corresponding order was issued on July 12.

During the third episode, the 10 garrison courageously held on relatively weak positions - and gave the field troops the opportunity to quietly withdraw, remove weapons and serfs, and then successively blow up (first left bank and then right bank) forts. The enemy was left only ruins.

Thus, in less than a year of hostilities, the fortress of Ivangorod has played an important strategic role three times - and in an atmosphere of maneuvering war. The fortress fought much better than many of its more modern "sisters" and demonstrated that even a weak fortress can have an important influence on the course of military operations - and the era of fortresses has not yet ended. And it is worth remembering the old truths that have become the cornerstone of the success of the Ivangorod garrison: “strength of the fortress depends less on the strength of its walls than on the spirit of its defenders”, “there are no weak fortresses where there are courageous people who defend them”, and finally "The ambush is not strong in the garden, but the ambush is strong by the governor." 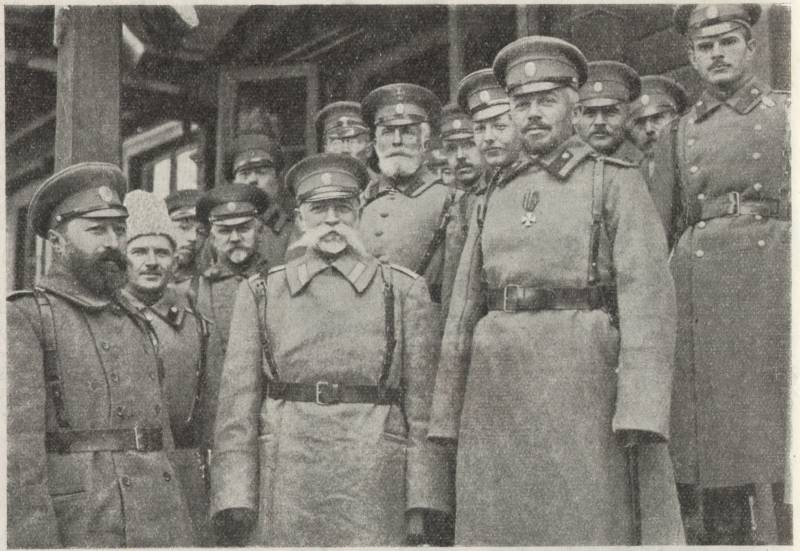