March 3 2018
66
The black Polish ingratitude of the Red Army for the liberation of the country from the Nazis can be partially compensated only by the full compensation of the human and material losses suffered by the Soviet Union in Warsaw. 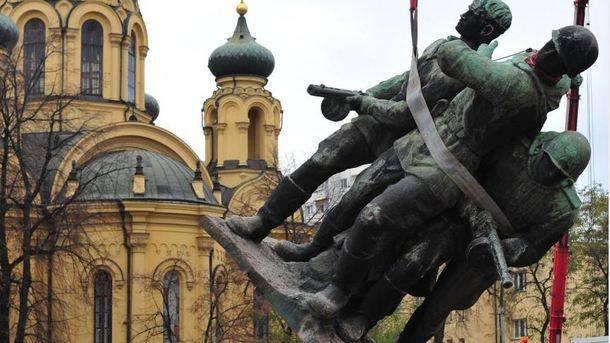 So, the government of Poland, to whom, apparently, there are few endless squabbles in relations with Russia, decided, in addition to this, to beat pots with Germany too.

“Poland assesses the damage caused by Germany during World War II to 850 billion dollars. This was stated by Arkadiusz Mulyarchik, the head of the Sejm Reparations Commission. “We are talking about huge but justifiable amounts for ruined cities and villages, the economy and industry. For the lost demographic potential of our country ", - said Mulyarchik, noting that the issue of reparations has not been resolved
In Poland, want to recover from Germany reparations for 850 billions of dollars

I will say right away. I do not care about Polish-German relations. And even taking into account the fact that the Poles really suffered from the Nazi occupation, there is no need to doubt for a second that the nature of these suddenly arising claims is not so much historicalhow much is purely political. And it relates, first of all, to the current geopolitical situation.

Speaking more precisely, to the Nord Stream-2 gas pipeline project, the main supporter of which in the European Union is Germany. The simultaneous initiation of the theme of the Polish lawsuit against this country and the complete failure of Polish efforts to torpedo Nord Stream 2, which will deprive Warsaw of easy money for the transit of Russian gas, speaks for itself.

It is also quite obvious that this Polish initiative has been coordinated with Washington, which is quite unashamedly trying to supply Europe with its precious overseas gas, instead of much cheaper Russian. And for this purpose, day and night, it frightens the EU countries with energy dependence on the “Russian aggressor”.

But I repeat - all these Polish-American “quirks” in this case are not at all interesting for me.
But what is really important is the Russian theme voiced by the same Polish politician in this regard.

"At the same time, the deputy believes, Poland does not make sense to demand compensation from Russia, because it" does not respect international law "

And here begins the most interesting. The very thing to which Russia is a direct affair. So, “noble” Poland will not defile claims against such a law-abiding country like the Russian Federation. That's great. One reason to ridicule the Polish gentry who became overdone beyond measure will be less. Moreover, these reasons are without it - the car and a small truck.

But this is not a reason for Russia to close this topic altogether. Because, unlike Warsaw, Moscow has no reason not to present this country with an absolutely legitimate and very substantial account for the material and human losses suffered by the Soviet Union in the process of liberating Poland from the German invaders.

The legal validity of this account is not in the slightest doubt. The USSR conducted its military operations on the territory of this country in 1944-45. on absolutely legal grounds, in writing enshrined in a joint declaration of the three powers - participants of the Tehran conference 1943 of the year - the Soviet Union, the United States and Great Britain. Where, in particular, it says:

“With regard to the war, representatives of our military headquarters participated in our round-table talks, and we agreed on our plans to destroy the German armed forces. We have reached a full agreement on the scale and timing of the operations to be undertaken from the east, west and south. ”
Tehran Conference

Thus, it is quite obvious that the Soviet military operations on the territory of Poland took place on the basis of the agreed decisions of the leaders of the Big Three, which, de facto and de jure, was at that time the highest authority on planet Earth.

Accordingly, the military actions of the USSR on Polish territory were completely legitimate, and the losses it incurred are compensable. At the same time, the Poles have no right to declare that they, they say, did not ask the Russians to free them, since these actions of the USSR were legalized by the results of the Tehran conference of the heads of the anti-Hitler coalition. And, therefore, supported by the Polish emigre government in London, which was part of this coalition.

Poland’s possible references to the greater appropriateness of bringing such a Russian claim to the aggressor state - Germany should be rejected on the grounds that reparation relations with Germany were once fully legally completed, but they did not cover the entire set of Soviet losses. Meanwhile, Poland did not participate at all in the compensation of the military expenses of the USSR. Although it received from his hands its statehood and into the vast additional territories.

As for the substantive part of the Russian lawsuit, it seems fair to take as a basis the figure of the irretrievable and sanitary losses sustained by the Red Army, incurred during the liberation of Poland, including the newly transferred German lands to it.

Polish references to the fact that then these were the territories of Germany and, therefore, to include the losses incurred by the Soviet army in the liberation of Poland is illegal, are legally untenable. At the same Tehran conference 1943 of the year, that is, before the entry of the Red Army in Eastern Europe, the following was recorded:

Polish question:
W. Churchill’s proposal was accepted that Poland’s claims on the lands of Western Belarus and Western Ukraine would be satisfied at the expense of Germany, and the Curzon line should be in the east (conditional line)

Thus, in the 1944-45 years, the Red Army liberated the territory of Poland already in its modern borders. That is, we should talk about 600 thousands of Soviet soldiers who died in these territories and about two million more injured there. It seems that a fairly modest amount of compensation for each Soviet soldier killed for the freedom of Poland would be a rather modest sum of one million dollars. For each wounded 500 thousand will be enough. Thus, the amount of Polish compensation only for direct human losses of the USSR should be approximately one trillion US dollars. Adding to this figure is still approximately 100 billion dollars in material costs of the Soviet fronts liberating the current Polish state. And also let's not forget about the post-war demographic catastrophe in the USSR, provoked, including, by huge loss of life in Poland - at least two unborn children per family of one dead Red Army man. This is somewhere else in the 400 area of ​​billions of dollars.

Total, according to the most calculations, Poland owes Russia, as the successor of the USSR, for its exemption from the Nazis about one and a half trillion dollars of compensation. Previously, this question did not stand, because this country behaved quite decently towards Russia (USSR), and therefore there were reasons for a lot of things in our relations to turn a blind eye. Today there are no such reasons. From the word at all. Poland itself destroyed them with its aggressive anti-Russian behavior and, in particular, with its unprecedentedly boorish attitude to the memory of Soviet liberators. Such things are neither forgiven nor forgiven. And, therefore, the time has come for the Poles to pay their historical bills. Russia did not hire anyone free to release.