Fiends on the Black Sea: the little-known crimes of the Nazis in the area of ​​Novorossiysk. 6 part

March 7 2018
40
This part is probably one of the hardest of the whole cycle. However, for the author after the second part, this cycle began to resemble an immersion in filth. It would seem that quite well-known things, quite well-known Nazis, are so “famous” that even the call of reconciliation periodically gurgles in the “democratic” swamp. But only when you come across this without official communication, without the help of books in dust jackets, without the help of a regular television face, with interruptions in advertising pads and smartphones, and directly with faded pages of testimony, in simple words, without embellishment, feelings change somewhat. This part will be difficult, because it will be a question of women who have become hostages of the dehumanized European biomass.


Everyone, of course, heard about the Japanese "stations of consolation" during the Second World War. In order not to receive endless reports of new sexual exploits of his so-called soldiers, and also to prevent their samurai honor from puffing up and not starting to interfere with walking, General Okamura, in a fit of wisdom, in fact legalized the rape of women in the occupied territories. He put this abomination on industrial rails, organizing these very "stations". As a result, human история got a vivid example of legalized sex slavery in a female concentration camp.

However, Okamura, in his desire to raise violence against women to the rank of industrial and to some extent controlled underworld for other wives and mothers, was not original. The Germans also did not lag behind their allies along the axis. It all began, of course, with the standard dirty rape already worn massively. After all, "enlightened Europeans" understood by conquered property not only movable and immovable property. People became property ...

The occupied Black Sea coast was no exception. At the same time, the testimonies of citizens say that the Europeans who had been dehumanized, had not managed to “get comfortable” on the captured land and even didn’t occupy Novorossiysk themselves, already rushed to demand their bestial rights. The first victims of the new order were the villages, villages and stanitsa, which were the “satellites” of the city, such as Glebovka, Myskhako, Vasilyevka and others (now these settlements have actually become Novorossiysk districts, retaining, however, the former names).

Evidenced by a resident of Novorossiysk citizen Lyashenko N.F. (Alas, the decoding of the name and patronymic in the documents could not be found, some pages were erased and unreadable):

“... The Germans organized mass rape of women and girls, especially at the state farm Myskhako, the villages of Vasilyevka and Glebovka. Even with the old women were not considered, saying that all the same war. "

Not a bad argument, is it? Anyway, war. It just seems like some kind of deja vu from the past. Is it not such an argument that the atrocities of the invasion of the European locust are still being justified? And this is done very often under the cover of the white flag of the peacemaker, especially when phrases like “no need to kindle”, etc. begin to flash.

A resident of Novorossiisk Bondareva Agafya Alexandrovna 44, who lived at the time at the state farm Myskhako, testifies:

“... In the evening of September 13, 1942, the German and Romanian soldiers in Myskhako began a wholesale rape of women. That night both teenage girls and old women, their mothers, were raped. I can name a number of names raped by the Germans ... "

Together with the number of rapes, the number of female suicides inherently increased. So, even at the beginning of the occupation, women could not endure moral humiliation, women settled accounts with life. The moral bar of our citizens was so high (which is now being silent or becoming sarcastically mocking) that even relatives of the victims could not bear this cannibal abomination. September 15 1942, the Romanian lackeys of the Nazis, raped and beat the wife of the Red Army soldier Tatyana Ch. Until half a death, her mother then hanged herself.

Some women did not wait at all when human-like creatures descend upon their souls. Rosalia G., the wife of a famous doctor in the city, saw what order the “new Europe” brought to Novorossiysk. Having access to pharmaceuticals, the unhappy woman poisoned herself to save herself from being with the Nazi order on the same land.

The same girls and women, whom they managed to grab, but faced stiff resistance, were hanged and shot by the Nazis. In 1943, young girls were brought to the Markov club before 20. They were stripped naked, tortured and executed. This personal female hell continued even when our army and navy went on the offensive, discouraging more and more of Novorossiysk from the enemy. On the third day after the liberation of the city, a corpse of a tortured young girl was found in a German officer’s dugout, located on Komsomolskaya Street. Her face was burned, her arms were twisted out of joints, and her breasts were cut with a knife. 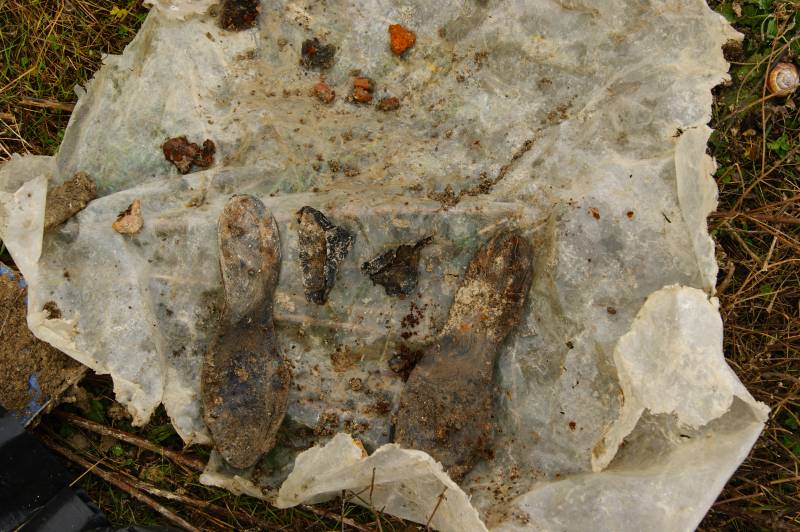 Soles of women's shoes, found in the firing hole last year. What did this woman experience before she died? Sometimes you want to forget what you see.

But all this was not enough for representatives of the "civilization". Whether izuverue required the formalization of their animal rights to people, or their "subtle mental organization" asked to create more comfortable conditions ... As a result, the occupants in the Novorossiysk region arranged two (the documents testify the presence of two objects, but they could be more) camps, not much different from the concentration, and one, the so-called cabaret. But they were united by one goal - sexual slavery and violence. Broken, starved, intimidated girls were driven to these places, and even girls who simply physically could not offer any resistance were driven away.

One of these camps was located not far from the present Gorny hamlet. This camp the Germans called "secret camp". The camp consisted of 20 barracks, where the German officers went to the "entertainment", as they themselves expressed. The second camp consisted of about 35 barracks and was located between the first camp and the station Krymskaya (now the city of Krymsk). In the camp, women were relegated to the status of things, i.e. property that, as unnecessary, could be easily disposed of. 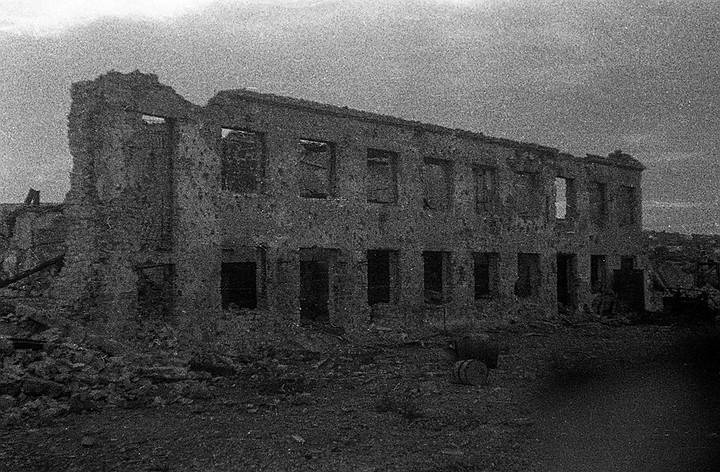 One of the most "preserved" houses in the city

In the city itself was organized "cabaret", which was sometimes called the invaders "theater". To further humiliate and trample the human dignity of our people, the Nazis placed their stash to forcibly enslave women in the House of Pioneers. It is possible to treat pioneers and Soviet authorities differently, it is now in vogue, but the fact that this was a purely animal psychological course of asserting cannibalistic ownership of people, their body and thoughts can hardly be denied.

For capturing, in the literal sense of the concept, women and girls for camps and cabarets were created special squads. These, grouped into a flock, hyenas scoured the streets of the city, apartments and houses in search of prey. Do not disdain squads 16-year-old girls and younger. That is, pedophilia was in the order of things, both among privates and among officers.

These facts, not even a stone, but an avalanche in the garden of those who prefer to cry over the "innocent victims" - the German soldiers. The author also reserves the right to believe that it would be far more fair to give the spoiled Hitlerite invaders to prisoners.

Ctrl Enter
Noticed oshЫbku Highlight text and press. Ctrl + Enter
We are
Reports from the militia of New Russia for 27-28 September 2014 of the yearResults of the week. "Well, do not change me because of every idiot!"
Military Reviewin Yandex News
Military Reviewin Google News
40 comments
Information
Dear reader, to leave comments on the publication, you must sign in.