Suffragists - how women fought for freedom

March 8 2018
54
What would you think if you saw on the streets of your city a demonstration from ... 30000 women carrying posters with the inscription: "Provo vote women" and loudly singing "The Battle Hymn of the Republic" - "Glory, glory, halleluya!" At least you would be very surprised . But men were also surprised at this on the streets of American and English cities, where exactly the same thing happened exactly 117 years ago.

Then, in the struggle of women for their equality with men in the political and economic fields, everything went: rallies and pickets, distribution of leaflets and chaining themselves to the doors of men's toilets, and when all this turned out to be not enough, radical tools went into action: hidden in elegant women's muffs, lace umbrellas and knitting needles and whips. All means, considered British and American women, are good in the fight against the power of men. Women dismantled pavements and threw cobblestones at police officers, threw them into shop windows and political figures, and then even explosives went into action! 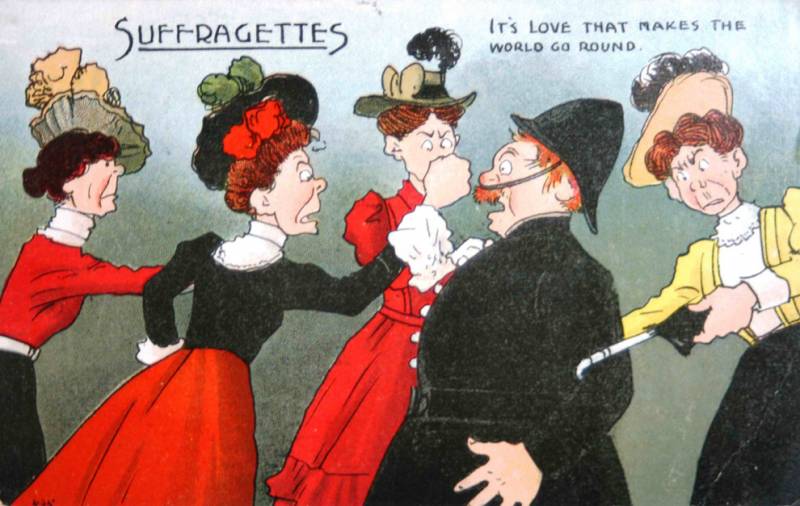 Suffragist movement was ridiculed in the press. On suffragist drew a lot of cartoons. For example, on the top of this inscription: "And this is the love that will make the world turn over?"

It was then, at the beginning of the twentieth century, of a very decisive type of lady in hats with flowers and slippers, as well as in suede and coarse woolen gloves (middle-class suffragists did not shy away from simple working women, if only they shared their ideas!) They organized street scandals and, despising all the norms of upbringing and Christian morality, they desperately blasphemed in order to attract attention, thrashed the policemen with umbrellas, and in response they did not hesitate to thrash most real ladies with their wooden clubs. When they found themselves in prisons on charges of violating public decency and order, they went on hunger strikes and all this for the sake of civil liberties, which women of that time were deprived of. It is difficult to give an unambiguous assessment of their radical activities. But it is indisputable that the suffragist movement has achieved the result and, although today's young people don’t even know the words, in memory of those years, our favorite spring holiday has remained, at whose origins the suffragists were indefatigable and obsessed with their ideas.

This is how the suffering women tried to feed the starving women in prison in a violent way. 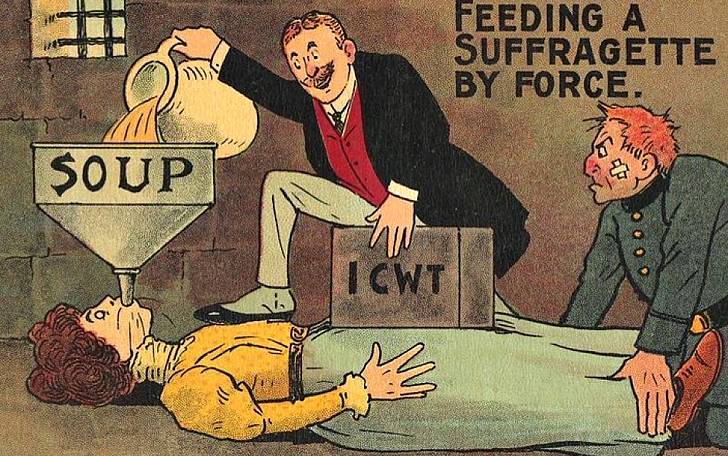 It all began, by the way, from the fact that Emmelin Pankhurst (1858 – 1928) could not forget the words of her father, somehow said by him over her bed: “What a pity that she is not a boy!” Poor father Emmeline then even and did not suspect that his daughter would think at that moment about the fact that if all people are equal in the Bible, then why are "boys better than girls" and they are allowed all that girls are deprived of. Thus, with just one of his sentences, he changed not only his daughter's entire life, but the life of the women of America and Europe, no more and no less!

However, referring to the same Jane Austen novels, we can see that the men themselves were to blame for the development of women's emancipation! Let's open the novel “Pride and Prejudice” and read that men demanded from young ladies to be spiritually developed, and for this they could play music, spoke French and German, were well-read, in a word, “develop their mind”. But, starting with this, women did not want to stop, so it turns out that, demanding development from their girlfriends, men already at the beginning of the 19 century saw the same bitch on which they sat. 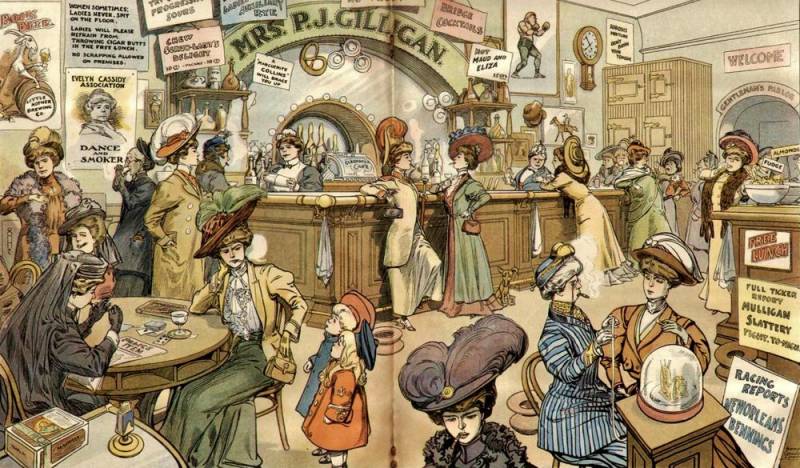 Well, having received a primary education, women began to demand equal rights with men. Moreover, in addition to the provision of suffrage, suffragists also sought the right to property, higher education, the right to divorce, and equal wages with men. Already in the first manifesto sufragistok, called the "Declaration of feelings", proclaimed: "All men and women are created equal." Everything, in general, the Bible is not it? And at first the struggle of women for civil liberties had a decent character. But neither the men, nor the leaders of the government paid attention to the letters to the newspapers and the deputies of the parliament and the congress, nor the agitation on the streets, the debates and speeches of Hyde Park. And then the women realized that only force could achieve something from such an “animal as a man” and moved on to an active struggle. 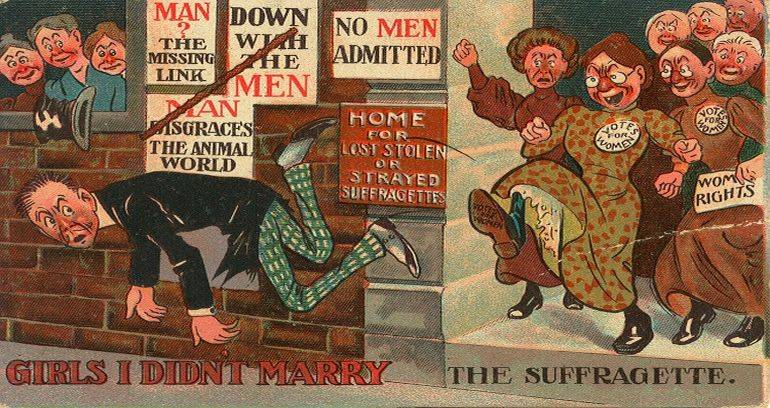 A vintage postcard against the movement of suffragists, containing a hint at the stormy discussion of the “lost link” between a monkey and man, which at that time was supposed to provoke men's indignation.

Many emancipated women already had a good education by this time. Their minds were developed by reading, therefore their actions were distinguished by great ingenuity and pronounced shocking. Suffragists dug up golf courses at night - exclusively men's games, knifes cut pictures (in particular, they were very annoyed by Velazquez's “Venus in front of the mirror” and others like her, who, in their opinion, insulted women's dignity and threatened to physically harm members of the government, , of course, regularly staged riots.)

Among the male politicians, especially hated by suffragists, in the first place was Winston Churchill, to whom they harbored particular hostility. The reason for this was that when one of the suffragists publicly called him a drunken dork, Churchill said: "I will sober up tomorrow, and your legs will be crooked and will remain." Naturally, such an answer was considered by all ladies suffragists to be an insult to themselves and they decided to settle accounts with it. There were threats to Churchill, stones were thrown at him, they tried to beat him with sticks and even with a whip. The whip as a result of the woman who attempted on Churchill was taken away, but he didn’t think of anything better than to give his wife as a winning trophy. 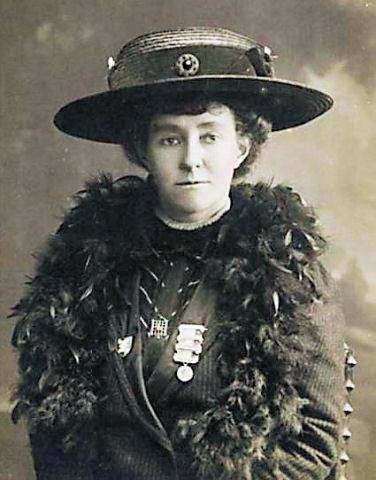 Emily Davinson. On the chest - the reward movement.

Very soon, her heroines and martyrs appeared among suffragists. The most famous among which was Emily Davison. They talked about her as an outright radicalist because she planted a bomb in the house of David Lloyd George. The bomb exploded and seriously damaged the new building, but, fortunately, no one died. Even comrades in the movement did not approve of such "drastic" measures. She was arrested nine times for her actions, went on hunger strike in prison and was force-fed. Protesting against him, she threw herself down a ten-meter ladder and suffered serious injuries. Emily Davison was killed during the English Derby at the races in Epsom in 1913, when she ran out to the stadium to meet the stallion Enmer, who belonged to King George V. under the hoof and four days later died in hospital from his injuries. At the memorial service in London on June 14, which became widespread, many carried posters with inscriptions: “Give me freedom or let me die” and even more radical “Freedom or death”. On the tombstone of her was carved a memorable phrase "Deeds, not words." Thus, the suffragists movement acquired its martyr, in whose name many women swore, embarking on the thorny path of struggle for gender equality. 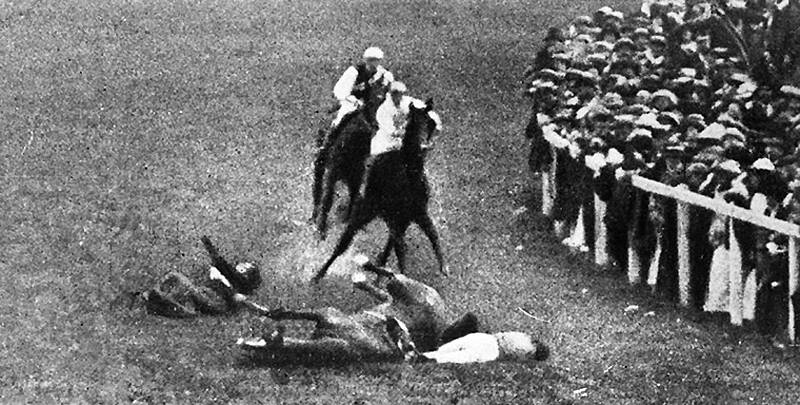 The martyrdom of Emily Davinson. A unique photo from Epsom.

However, not only such horrible actions suffragist attracted participation to the problem of emancipation. They very skillfully attracted the attention of the public by very spectacular and truly colorful processions. Women walked through the streets in elegant white dresses with chains of flowers, holding in their hands the flags of the suffrage movement. At the same time, they either sang the “Anthem of the Republic”, or they went with a chilling cry-howl to the thunder of drums and wind instruments. Parades were massive and carefully organized. Naturally, the crowd of onlookers gathered to gawk at all this.

However, the suffragers were not shunned by equally well-organized violent actions, the so-called “Crystal Night” was the most famous of which in London. Then the women, who brought stones and hammers into the muffs, began to beat the shop windows and windows in the houses, and when police squads were thrown against them, the policeman also got hammers! Special awards have been developed and instituted for the special achievements in the movement of the suffragist women. 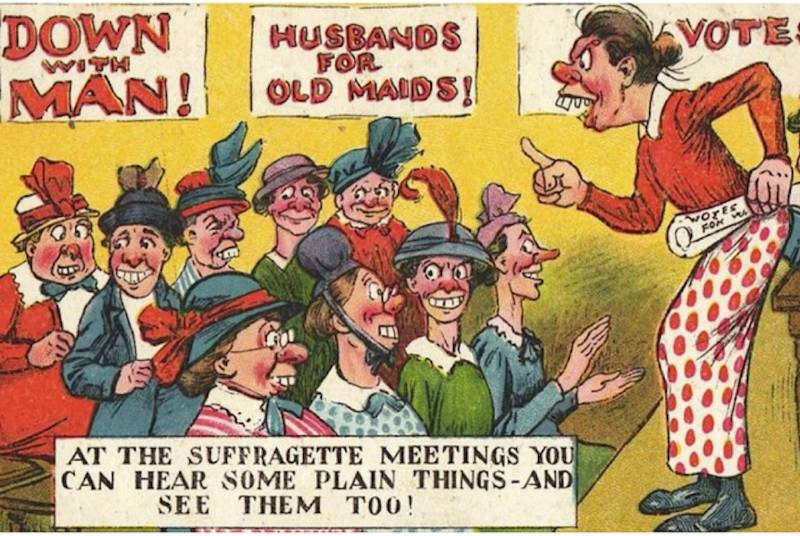 Another postcard against suffragist women. Faces are clearly unattractive and even more ...

However, the movement of suffragist women was suppressed in a very cruel way. Women were beaten with batons, massively imprisoned, and even banished to hard labor.

But ... the case crowns the bottom line. The sacrifices made by the women of England and the USA were not in vain in the end, and they achieved their goal. Moreover ... now few people are surprised that when in Canada men were allowed to ride in the subway with a naked torso in the heat above 35 degrees, the women immediately demanded appropriate permission. “It’s not necessary that we exercise this right,” said one of the leaders of the Canadian gender equality movement, “but we are in favor of having this right!”

P.S. A number of wonderfully filmed TV series are devoted today to the topic of women's emancipation and the changes taking place in society, among which should be called “Lady Happiness” based on the novel by Emil Zola (1996) and Downton Abbey (2010). And, of course, how not to recall the legendary "Great Race" (1965)