Systemic crisis will not prevent long “cohabitation” of European countries

March 2 2018
7
Recently, the world has seen that the European Union has fallen into a deep systemic crisis. In this regard, many political scientists are exercising forecasts, predicting the EU will soon collapse into two unequal shares: East - West. The terms are different, but they all have little to do with reality. Because in the end, the European community will continue, as unfortunate families remain, forced by circumstances to live in the same roof under conditions of contention for years. What will keep the European Union in its current heterogeneous composition? 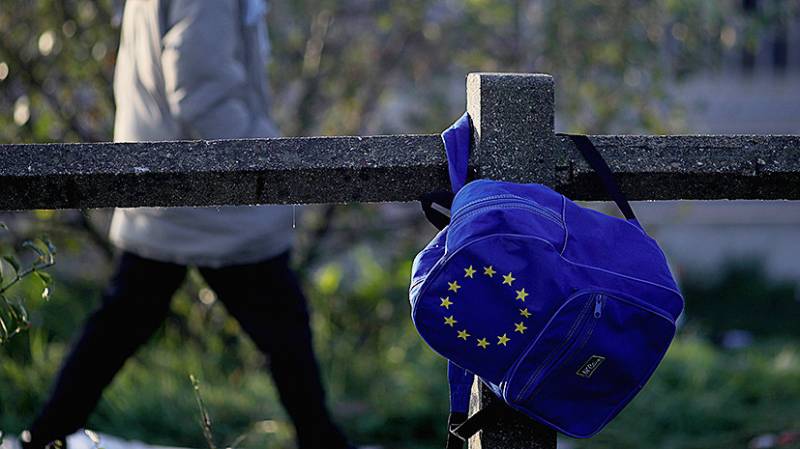 A brief joy of prosperity in Eastern Europe

The answer to this question must be sought in the origins of the crisis, that is, at the beginning of this century, when the European Union at once joined a dozen developing countries that had fallen out of the so-called “socialist camp” or from the Soviet Union. Soon, another three countries were added to this company, which in the end made up a fucking dozen of “Young Europeans”.

Since then, the optimism of the new members of the European Union has been smoothly in harmony with the pragmatic calculations of the leading founding countries of the community, which without much difficulty expanded the sales market for their products and strengthened by labor resources from Eastern European countries. It seemed that there would be no end to this harmony.

Investments and just financial assistance for the development of infrastructure and socially significant projects came to the countries of Eastern Europe from the West. Mainly German companies were invested. For example, in the Hungarian city of Gyor, the automobile concern Audi, for eight billion euros, built an engine manufacturing plant.

The scale of this enterprise is visible not only by the money spent. Now they produce about 90% of motors for Audi cars, in addition they produce engines for the Volkswagen concern. The plant employed 12 thousands of Hungarian workers. Budapest responded to this with tax breaks for the enterprise and provided it with access to government subsidies.

Another German concern Daimler has launched a Mercedes-Benz B-class car assembly plant in Kechkermet in central Hungary. Daimler spent 800 million euros to build the plant. Investments only in the new plant, excluding employment in related industries, provided jobs for 2500 people.

In the neighboring Czech Republic, the Volkswagen concern acquired the Czech automaker Škoda. Upgraded its production base, provided training for highly qualified personnel. All these works coincided with the preparation of the Czech Republic to join the EU. Škoda has grown to 26 thousands of staff and already in the first year of being in the EU, it issued products to 6,48 billion euros.

Similar examples can be found in Poland, where German factories went not only with assembling cars. Here, such powerful German concerns as E.ON, Siemens, Deutsche Telekom, Allianz, Volkswagen, Bayer arranged their production in a businesslike manner. German investments in the Polish economy amounted to about 30 billion euros.

In addition to Germany, the Netherlands, France, and Sweden were actively investing in Young Europeans. These investments yielded a noticeable economic growth in eastern countries and significantly raised the general standard of living. However, not so much that it equals the standard of living in old Europe.

No turn in the ranks of the "second-rate economies"

Today, the young Europeans complain that “the standard of living is not the same as in other EU member states. In Germany, receive four times more. But if this is the European Union, it should be the same, ”the Slovak Air Force journalist Tibor Matsak expressed a complaint to the British Air Force.

The fact that the relationship is not all the same, it became clear quickly enough. Under talk of integration into the European community, capital from the EU founding countries seized the economy of new members of the community, and began to repatriate the money earned to its head offices.

Moreover, the distribution of labor in European corporations was such that component parts and components for finished products were produced in the east of the continent, and they were filled with added value in the final product of the Western parent companies.

This is well illustrated by the example of the same Poland. She has a positive balance in trade with Germany exceeding 6 billion euros. Externally, it looks spectacular. In fact, a third of the Polish labor force today is employed in foreign companies, which provide two thirds of the country's exports. Often, the export becomes the same semi-finished product, which is filled with the cost of the German assembly lines.

The picture of economic relations completes the dominance of Western banks in the financial market of Eastern European countries. According to expert estimates, foreigners own more than 60% of banking system assets in Poland, 80% in Hungary, 98% in Slovakia.

Inequality has developed not only in the economy. For example, Poland by population exceeds Denmark more than six times. However, in the Council of Europe, the quota of the Danish representation is four times higher than the Polish quota. Young Europeans are made to understand who is in charge of the friendly European table.

All this caused a certain resistance of the new members of the community. It was most clearly manifested in the migration crisis of 2015, when members of the so-called Visegrad Group (Poland, Hungary, the Czech Republic, Slovakia) actively opposed the placement of refugees on their territory.

In fact, it was a protest by Eastern Europeans against growing inequality in the EU. After all, for example, for almost 40-million Poland, it was not difficult to host eight thousand migrants. The Hungarians, in general, under the noisy protest rhetoric, quietly attached themselves to refugees relying on a quota, but continued the dispute with Brussels.

In the meantime, the EU leaders assessed the situation and, without further ado, consolidated the de facto inequality in the Union, divided it into countries of "two speeds of development." So the institutional crisis got its new development. He auknul Hungary in accusations of deviating from democratic norms, and Poland - disciplinary measures for "undermining the values ​​of the EU during the judicial reform."

Experts talked about the fact that the European Union entered the clinch of confrontation and cracked at the seams. European politicians take it more calmly. They understand that the question is about the discipline within the community, whose new members must firmly grasp their place and not claim more.

So be it. Nobody seriously considers that one day the Eastern Europeans overflowing with indignation will leave the ranks of the European Union. There are several reasons for this, and all are economic. First, the rejection of the free movement of labor will hurt the budgets of the countries that left the EU. After all, for example, economic migrants from Poland, known to the world as “Polish plumbers,” fill their country's treasury with 5-8 percent. The so-called "Schengen" is expensive for the countries of Eastern Europe.

The second reason is even more serious. The rupture of economic ties with the old Europe will lead to mass unemployment, estimated in millions of people. It will be a disaster. The carriage of relative well-being, as in a children's fairy tale, will quickly turn into a pumpkin. The years of preparation for EU accession and integration into the community will be wasted in vain.

So it turns out that the old Europe is putting pressure on its partners to play by the proposed rules. And it does not even try to change these rules, as well as its extensive economic policy. The other day in Brussels announced that the Balkan countries will be able to join the EU in 2025 year. In the ranks of the economies of the "second stage" is expected to replenish ...

Ctrl Enter
Noticed oshЫbku Highlight text and press. Ctrl + Enter
We are
Reports from the militia of New Russia for 27-28 September 2014 of the yearResults of the week. "Well, do not change me because of every idiot!"
Military Reviewin Yandex News
Military Reviewin Google News
7 comments
Information
Dear reader, to leave comments on the publication, you must sign in.