Snide comments and laughter under cocaine

February 28 2018
143
Honestly and frankly: is it difficult to understand, is it the "psaki virus" or the order of the owners? Hosts who, in their perception of Russia, remained in the 90s of the last century. Well, it does not happen and can not be, but if you really need to draw? 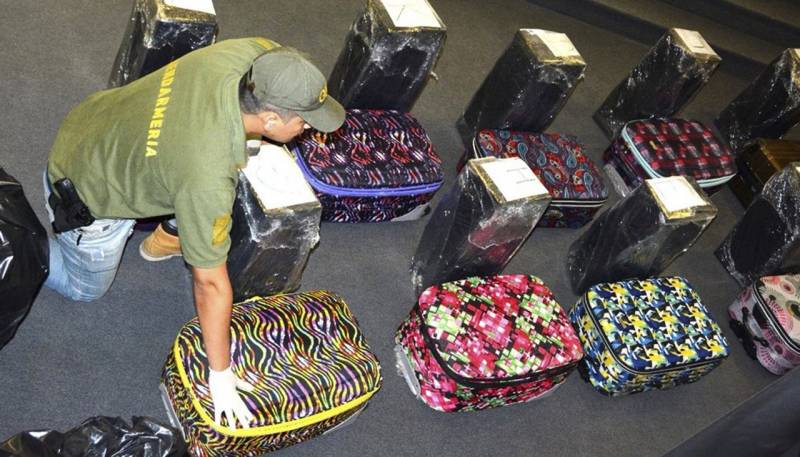 At the beginning of the official statement of the representative of the Ministry of Foreign Affairs M. V. Zakharova:

"Law enforcement agencies of Russia and Argentina carried out a joint operation to curb the supply chain of a large consignment of narcotic substances (cocaine) from this South American country to the European market. As a result of the carried out operational actions, the suspected citizens of both countries were detained, they are under investigation, and the case will subsequently be transferred to court".

"Information on the discovery of bags with suspicious contents on the initiative of the Russian Ambassador to Buenos Aires, V.V. Coronelli, and in consultation with the Center was communicated to the leadership of Argentine law enforcement agencies."

"We would like to emphasize the high degree of efficiency of interaction established in the course of this operation between the Russian and Argentine law enforcement agencies, in particular, with the Ministry of Security of Argentina and its Minister Patricia Bullrich."

What really happened? And the following happened. At school at the embassy, ​​the security service discovered 12 suitcases that contained 389 kg of cocaine. In consultation with Moscow, the ambassador reported the discovery of the Argentine security service and proposed a joint operation to neutralize the criminals.

For any adequate person from these words everything is clear. Someone from the embassy staff tried to use the diplomatic mail to organize a sustainable transportation channel. However, did not take into account some features of sending pouch. And did not have access to the formation of this mail.

Hence, it is enough to understand that this is either a technical officer of the embassy or a private person who had access to the embassy on an ongoing basis. Further - easier. The owner of the suitcases was sent to Russia. Reason, completely unrelated to the suitcases. And the suitcases remained. At the same time, cocaine is replaced by a dummy. Simply put, instead of a drug packed in flour bags.

The embassy is a regime object. School at the embassy - too. Take out the bags was not possible. Under the pretext of aggravating relations with Ukraine, the head of security Oleg Vorobiev tightened the security system.

And now about what happened, in the opinion of Western journalists and "ours" amicably singing along with them.

Russian diplomats in collusion with the FSB organized a channel for the supply of cocaine to Moscow. Argentines traced the drug to the gates of the embassy and put an ultimatum to the Russians. Not wanting a scandal, diplomats "handed over" the channel to Argentina.

In fact, we already have a people who have firmly taken the place of the "thoughtless". And this is not Argentines.

Then why did the ultimatum write for a whole year? Let me remind you that the bags were found in December 2016. And the arrests began now. But the liberals are not important. The "truth" is important, which the secret service agents are trying to hide.

But this is only "flowers". We are in the eyes of liberal journalists not with mental retardation or mental retardation in the initial stage. We're idiots. "Vegetables" who are completely unable to understand anything. Otherwise, the "berries" are simply inexplicable.

Do you know who in this "channel" worked as a courier? Do not believe it, but ... Hero of the Russian Federation, full gentleman of the Order "For Services to the Fatherland", will please Ukraine - the holder of the Ukrainian Order of Bogdan Khmelnitsky III degree and many more orders and medals of Russia and other countries, Army General, current Secretary of the Russian Security Council Nikolai Platonovich Patrushev! The former head of the FSB of Russia!

This is completely “truthful” information from the Western media and our particularly liberal publications.

Read the British The Telegraph, for example. Or NEWSru.com. According to them, the drugs were taken on a plane Patrushev. In the diplomatic mail.

How was it really?

In fact, again, "prose". The school at the Russian Embassy in Argentina was appointed a new farmsman. Upon arrival, he began to “take over” the farm, that is, he conducted an inventory. And during this inventory, I found cocaine suitcases in one of the outbuildings.

Where, excuse me, did I have to go to the new supply manager? I emphasize that the farm is a new one! And so far he has no connections. And what to do with the sudden “happiness” in the form of cocaine suitcases, he clearly did not know.

But he understood perfectly well what an intelligent person should do in such a case. And acted like a smart man. That is, he reported on everything to the ambassador.

The ambassador, the man is also very decent, informed his leadership. Well, and rushed a series of events.

Through 4 of the day, recipients arrived for suitcases. Citizens of Russia Vladimir Kalmykov and Istimir Kudzyamov. At the time of the detention of this pair, the owner of the suitcases, the former accountant of the embassy Ali Abyanov, was also detained.

And in Argentina, local citizens were detained: police officer Ivan Bliznyuk and former employee of the embassy Alexander Chikatilo. Both of them managed the local MORAL Foundation (“Russian Orthodox Patrons in Latin America”).

The detention of the owner of the goods, a person who chose not to "shine" in the conclusion and support of transactions, will take place in the near future. Andrei Kovalchuk is hiding now in Germany. True, the name is still in question. Just because it was reported, again, by foreign journalists (Clarin newspaper).

By the way, another version is connected with Kovalchuk for ... you and me. I will quote one professor, whose children, according to him, go to school at the embassy, ​​and on this basis he owns "more advanced information."

"This Kovalchuk is somehow connected with the Russian state - firstly, in one of the dialogues, he says that next time he is going to come to Argentina not for his own, but for the state account, secondly, he has more than close contacts with higher thirdly, he repeatedly came to Argentina and removed some suitcases from the embassy. Finally, he can influence the appointment of ambassadors. "

Can you imagine the level of this person? So, for reference, the prerogative of appointing ambassadors belongs to one person. President of Russia. This is precisely what they are trying to explain to us that Kovalchuk was released to Germany. Or maybe because it was necessary to open the whole chain?

And I want to finish again with a quote by Maria Zakharova.

“As for the speculations in the media that the specified cargo could be sent using diplomatic channels, we would like to note that this question shows ignorance of the mechanism and procedure for sending diplomatic mail, the content of which is determined, of course, by non-technical staff of the representative office.

We are surprised at how this topic is covered by “experts”; some of them agreed to the fact that this case “casts a shadow” on our diplomatic mission. Everything is exactly the opposite: the success of this operation was ensured by the effective actions of the Russian ambassador and the diplomatic staff. "

Now, regarding the aircraft cache. The plane of the “Russia” detachment did not light up there, the site of some urgently closed down ... Apparently, the drug traffic still works, not everything is intercepted. There is something for some to call on the brain.

Let's agree to be as adequate as possible. And do not believe in fairy tales about 12 suitcases, stuffed into the cabin of the aircraft as diplomatic mail.

Knowledgeable people from the Ministry of Foreign Affairs have said more than once that the entire diplomatic mail is crammed like a hand luggage, packed in a special way, and so on. The same applies to diplomatic baggage.

Moreover, all packages, documents and material values ​​that are sent through such channels are made out in a special way, with the registration of the corresponding forms. And at the other end of the route, respectively, the Foreign Ministry accepts them.

And here's how to explain (hypothetically) the lack of 12 bags with di-mail? Well, if only care and personal participation at the top ...

Excuse me, I do not believe that Lavrov has such a mess in Moscow.

Also, why reinvent the wheel?

The use of irregular diplomatic items for the supply of drugs is a very strange idea. Cocaine is possible.

After all, even if you do it in small batches (12 suitcases are not small), what about the controls? Not visual, canine?

And most importantly. Why plow the aircraft if there are dry cargo and freezers? On which carry drugs from the New World to the Old.

In order to cheat a heavy load with bananas humanly and with dogs, you need to spend more than one day. A freezer with famous Argentine beef or Brazilian pork is even bigger. Dogs are not iron!

Of course, you can find it, but a simple vessel ... a busy place in the port ... losses of companies ... And if there are dozens of vessels, like in any decent port?

Here at the exit something crap. It is possible that cocaine. But not in diplomatic directions. And in the brains of those who at any cost need to throw mud in Russia.

Ctrl Enter
Noticed oshЫbku Highlight text and press. Ctrl + Enter
We are
Results of the week. "Who you are lucky, in fact, and will carry a cock, and such a bird as you, I, too, will rush!"Results of the week. "Either true or all is well"
Military Reviewin Yandex News
Military Reviewin Google News
143 comments
Information
Dear reader, to leave comments on the publication, you must sign in.