Looking for the 714 battery. Part of 3. Photo report

March 4 2018
8
Before leaving "in the field," I still once again threw a cry to friends - were there any documents confirming the safety of the gun courtyards and battery huts. Most of the mentions on the network, even with photographs of some underground fortifications, belonged at best to 2011, and over 7 years in a resort area a whole village may disappear without a trace, not like artifacts of the Great Patriotic War. Fortunately, such a document was found. He was named - "On the inclusion of the cultural heritage" Artillery Battery of the Black Sea Coast Guard fleet No. 714 of captain MP Chelak in the unified state register of objects of cultural heritage. ”


Did this document affect the state of the battery or was covered with dust, was implemented, or, again, remained a beautiful piece of paper for the formal ticks of the work done, I do not know. However, the presence in the document of the list of battery objects — the 3 gun-yard, the 3 underground cockpit, the bunker, the observation point — gave reason for optimism.

On an early winter morning, our squad, which cannot fail to notice the loss of a fighter, as there are only two of us, left in the direction of Gelendzhik. The bright Sun, sometimes even blinding, still could not help the thermometer to move from the -1 mark. Once on the other side of the bay, dividing Novorossiysk into two distinct regions, we instantly found ourselves in a traffic jam of numerous trucks transporting industrial and agricultural products to the port, beyond the cordon. Getting out on the Sukhumskoe highway, we breathed freely. Not the season, which means a relatively free route. But we still won't be able to accelerate, mountain serpentine will not allow it. 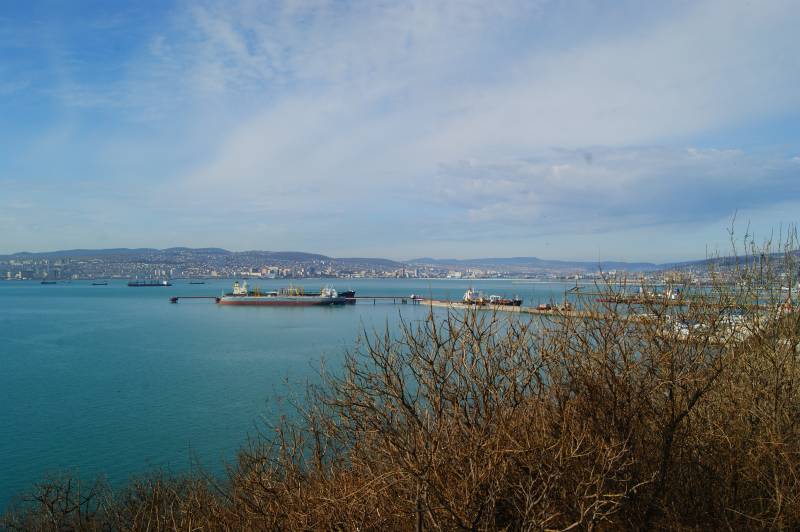 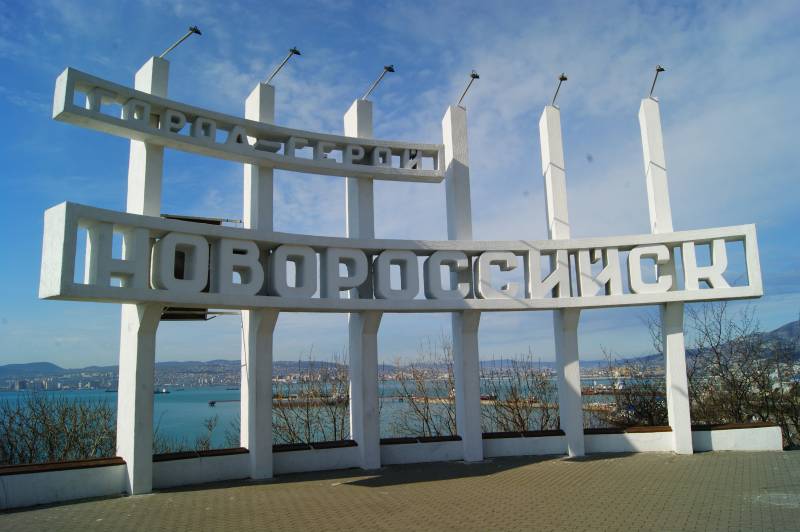 Finally, we left Novorossiysk, passing the stele with the name of the city-hero. Ahead on a rocky slope stood a kneeling granite figure of a sailor, heading towards the sea. This monument is called the Sailors of the Revolution, an unusually organic memorial that fits perfectly into the landscape. But our goal was still far away.

Long before entering Gelendzhik, we had to think hard about which road to take. The runway of Gelendzhik Airport essentially cut off the area of ​​the Blue (Fisherman’s) bay and once the territory of the settlement of Solntsedar from the main part of the city. At the end of the runway, of course, a certain road is indicated, but to hope for its real existence is at least short-sighted. Therefore, we didn’t drive directly into the “big Gelendzhik”. As soon as the next gaze lurked on the houses of the Gelendzhik outskirts, we rounded the city along the highway running at the edge of the runway.

It became clear that the “expedition” would be difficult. To the right of the road there were signs of “judicial wars” for the land of this picturesque southern coast. One by one, two-story buildings of the Soviet era, resembling skeletons, flew through the window; this, right, was once the boarding houses, motels and recreation centers. For every piece of land, various light-oligarchs, local and non-resident businessmen from the category of small and medium speculators are fighting. And given the originality of our refereeing and its undoubted inconsistency, such litigation can be fought over the years. So I recommend it to fans of urban tourism. 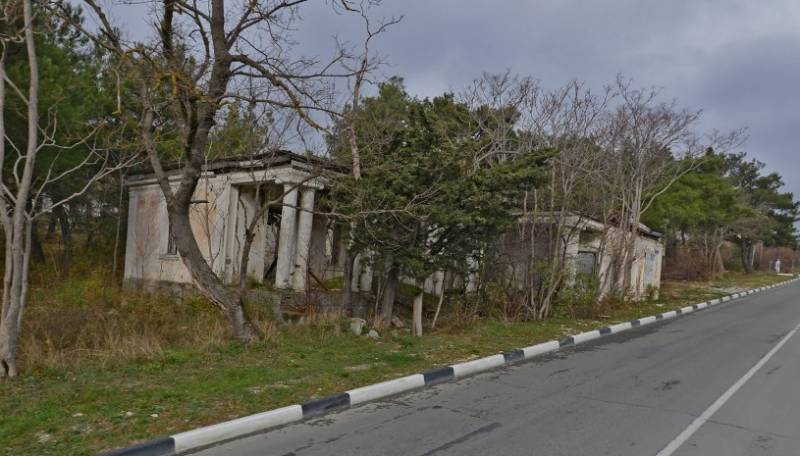 This meant that we would have to face the territory cut by the fence of the owners. And since these comrades live in the reality of litigation, our appearance can be interpreted not lower than the Tatar-Mongol invasion of strangers. The task and the presence of some sensitive border guard objects, such as, for example, a training center, did not make it easier for us. Therefore, to begin with, we descended directly to the shore of the Fisherman’s Bay, and, alas, it did not differ in purity, although it looked cozy. 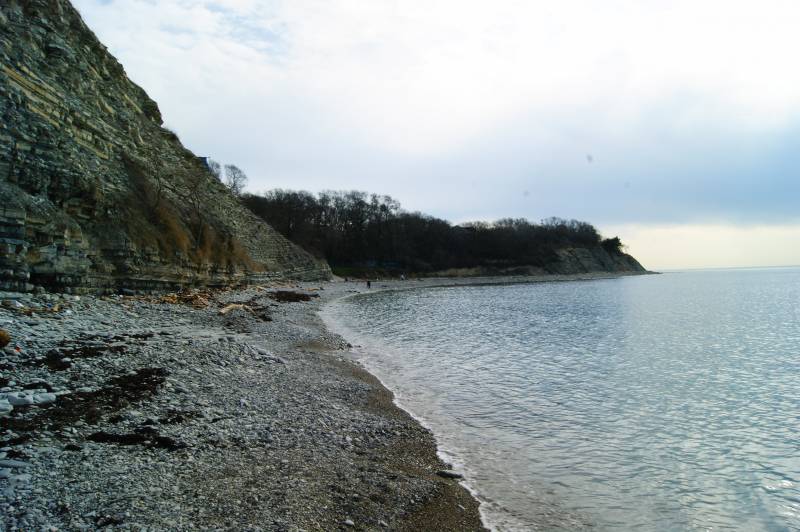 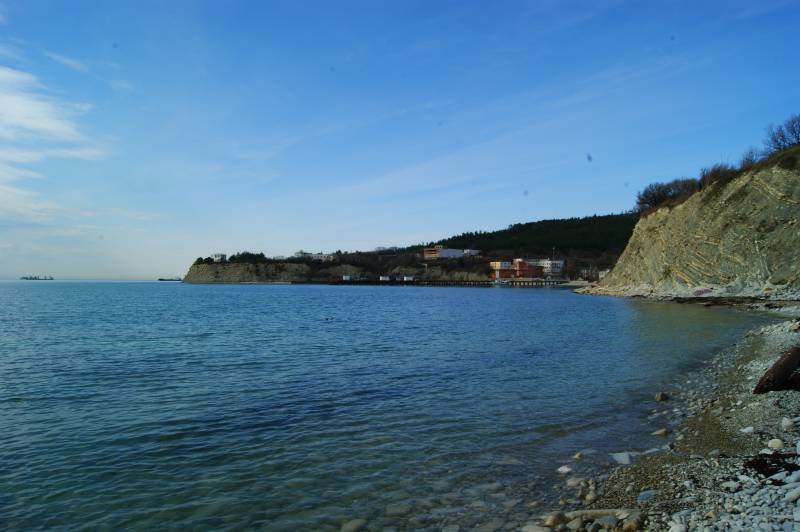 Almost immediately we stumbled upon the remains of a fortification. And since the Fisherman's Bay, until recently, was on the outskirts of the city, and large enterprises and other objects were not built here, there is no doubt that this concrete artifact was most likely part of the PDO of the Novorossiysk naval base. Moreover, directly on the beach is not the only structure, but either they are flooded, or walled up, or are located in a secure area. 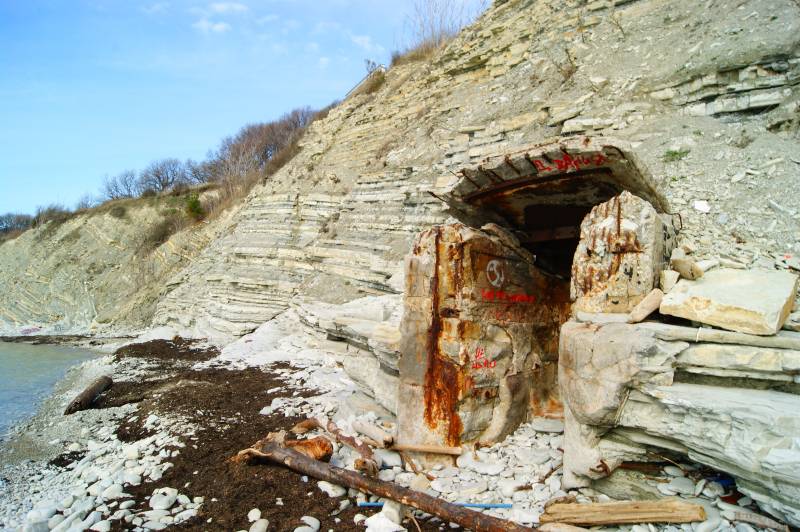 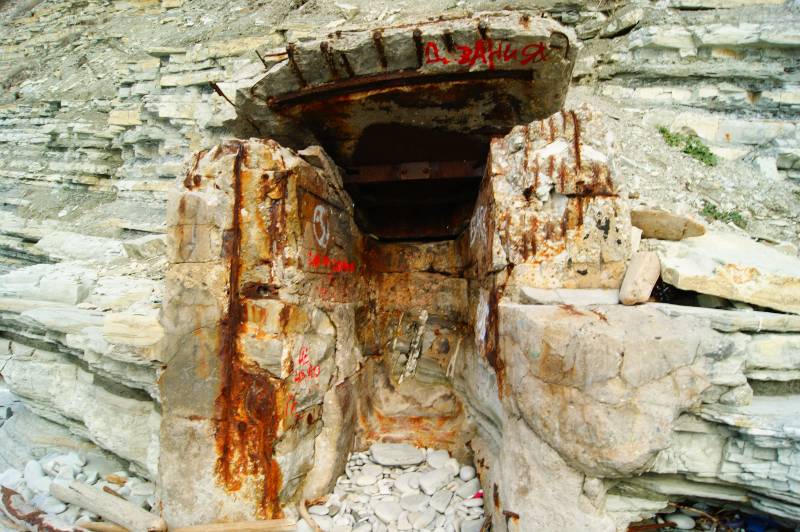 After inspecting the coast, we assumed where the 714 battery gun yards might have been, and also identified those places that the greedy gaze of business people had not yet reached. 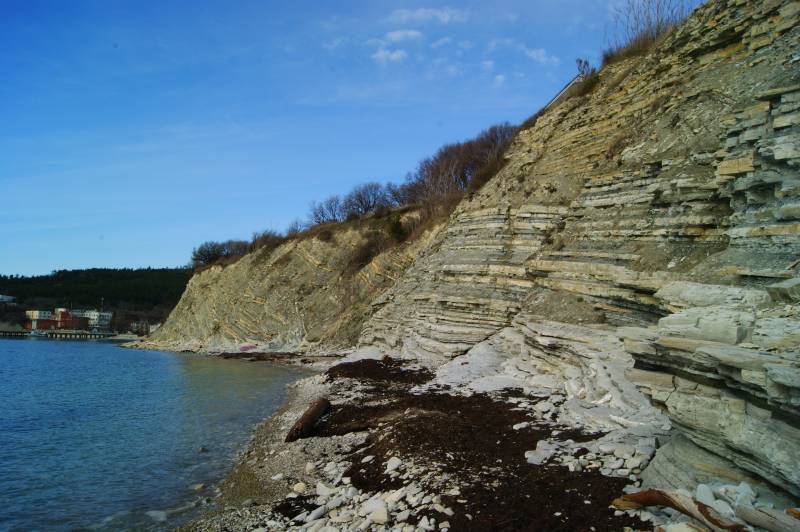 Oddly enough, but a survey of local residents did not give any results. At the very first mention of the coastal battery of the left cape of Rybatskaya Bay, the population’s eyes were rounded off as if they had seen a penguin on a bicycle. I felt a little sad.

Finally, we met one elderly comrade who fussed with ecstasy with his iron horse. He just looked at us knowingly and said that the battery was indeed on the left cape. For some time, fortifications remained in its former territory, but it was difficult to explain exactly where the comrade was, but he indicated the approximate direction.

The rock that towers above the sea was divided among private traders as a huge cake. The squalting fences of the grid-chain-link, broken gravel roads, cutting through small groves, and expensive two-storey and three-storey box-houses, filled with saunas, plasma panels and mini-bars, elegantly inferior even to the ruins of Soviet sanatoriums, could hide the whole battery easily.
In one of the regime areas, we met a stern, massive citizen with a glance demanding to repent immediately at the intersection of the state border. Having explained who I am and what I am doing here, I managed to extract from my comrade curious information. Objects of the former 714 battery exist to this day in varying degrees of preservation, but all of them are scattered in closed fenced areas, and some are located on the land under the jurisdiction of the FSB, i.e. move there is closed for sure. Not clear with the rest of the sites.

Hungry, tired and pretty frozen, we did not want to leave with an empty camera. We continued to wander along local broken roads, periodically resting on the next fence. The most colorful fence was the property of the border guards, which in some places consisted of rotten logs piled on top of each other and rusted wire. However, there was absolutely no desire whatsoever to explain to harsh comrades that you were not a camel.

Finally, we stopped for a smoke break at the next fence, which fenced a narrow coastal rocky strip overgrown with shrubs and trees. Suddenly, out of the small undergrowth, my eyes snatched out some kind of concrete structure that looked like a foundation from a distance. Without saying anything, so as not to frighten us off, we looked around. Trying to approach this structure, climbing from the shore, was stupid. And we stared at the fence, consisting of several iron grids, holding on to their word of honor and wire. The fence adjoined to some private house, and therefore the regime territory was unlikely. 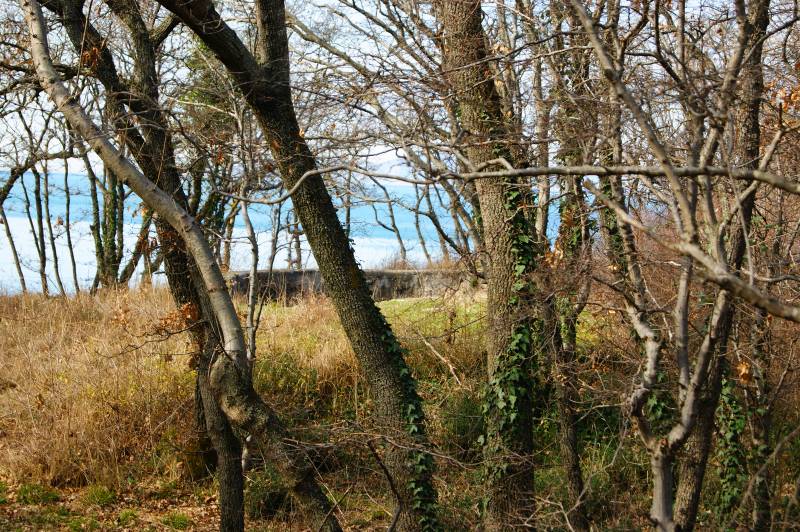 My friend graciously lifted one of the sections, and I crept inside. The land here clearly hinted that it had survived more than one and not two bombings. Periodically encountered overgrown funnels, traces of trenches and so on. And now, finally ... In front of me, the gun yard was spread in relative integrity, demanding a not-so-large “restoration”. 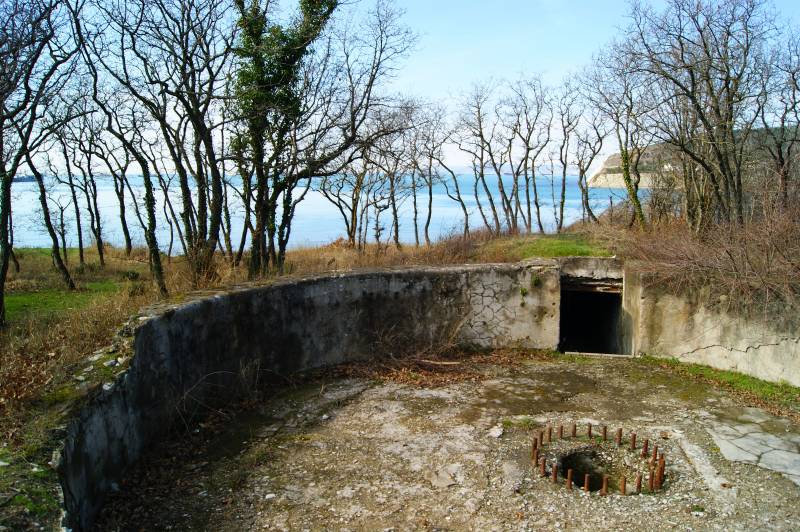 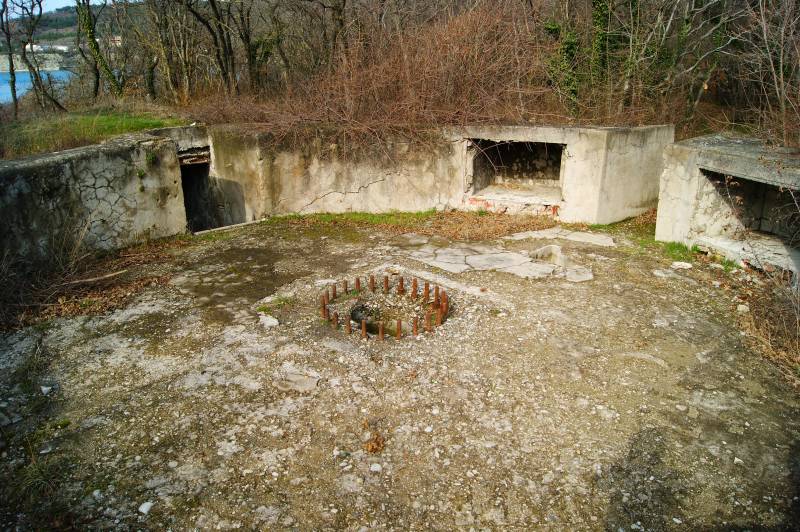 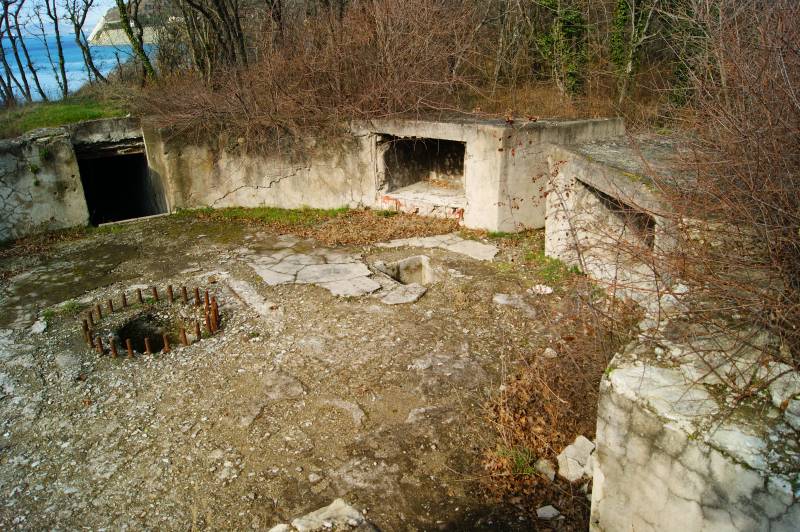 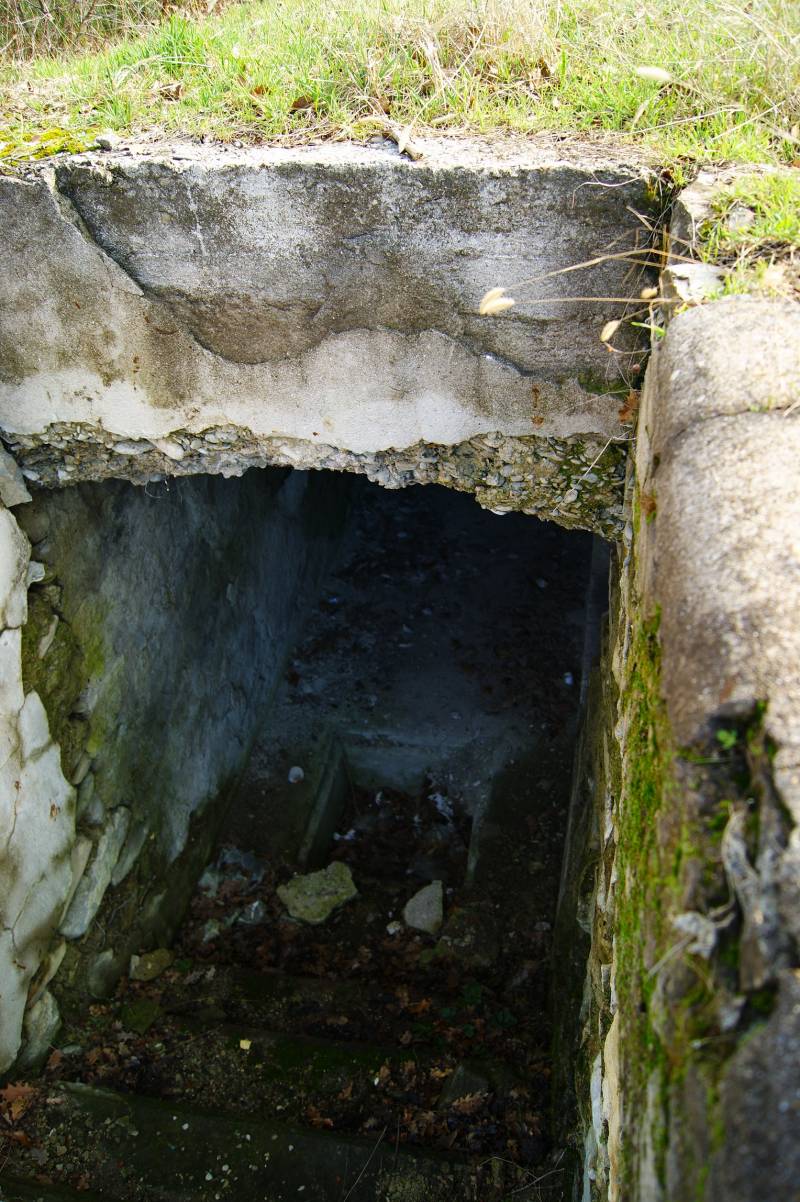 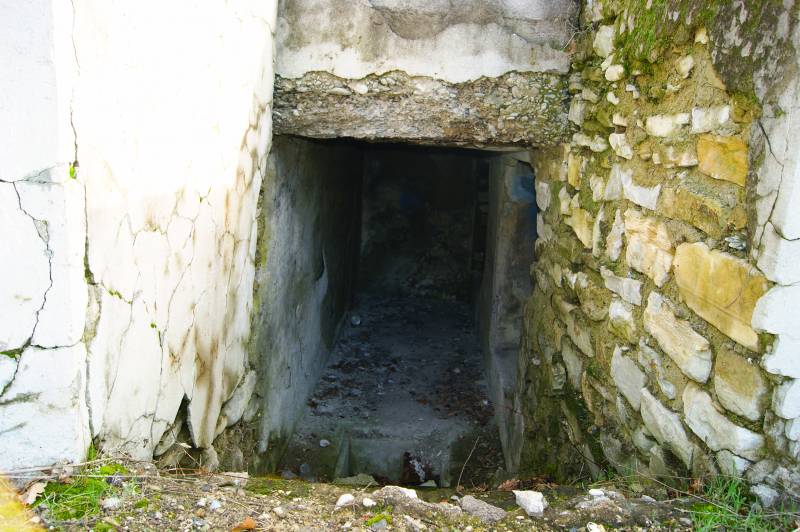 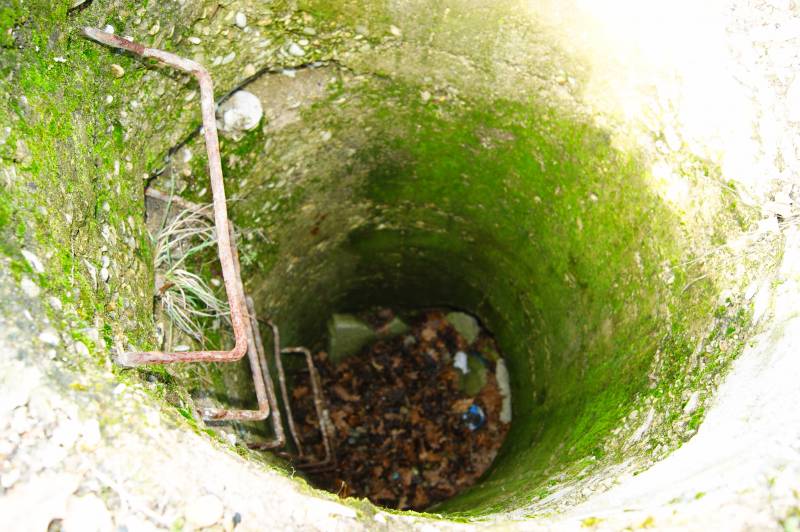 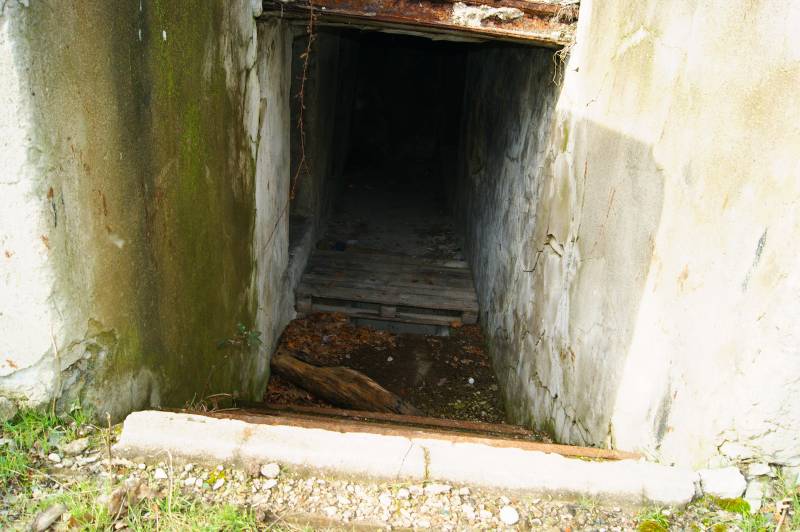 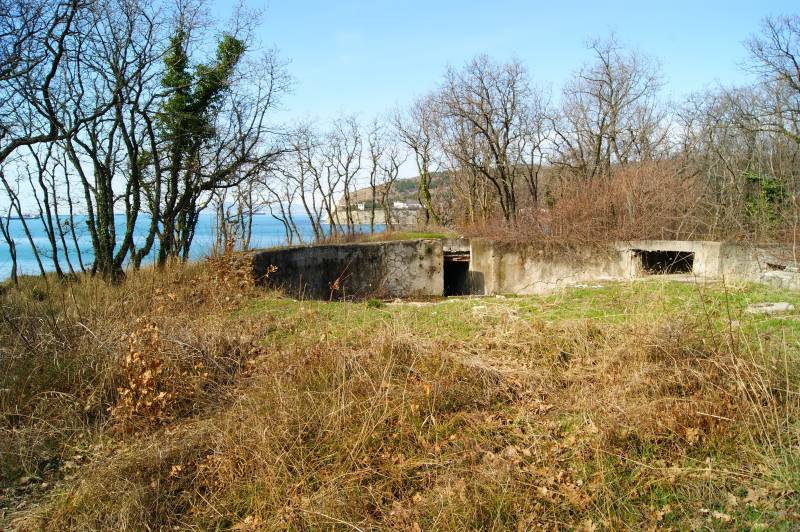 True, some metal parts finally rusted, but, in general, the fortification was, perhaps, only a little more neglected than the Zubkov museum battery. Alas, I did not investigate the entire underground part. Still, once again to communicate with various frozen “Chopavs” (as I found out the territory was “wiped off” by the next PSC), each of whom considered himself a big boss, did not want in principle. However, in one of the corridors, I went down and instantly ran into the same problem as the battery in 1942. The room was flooded.

Back we rode with a sense of satisfaction, and with a touch of sadness. Why in a country where the highest level is so often talked about patriotism and enlightenment, such objects remain neglected? Why, when all the fuss of officials descends into the field of practice, does it dissolve at the moment? Where does this border go when the St. George ribbon is removed and the spotlights go out in the studio? Apparently speaking television physiognomy patriotic only when next to the camera or high authorities. When it comes time to work with young people, we stumble upon a wall of indifference. At the same time, for most of the authorities, these walls are covered with letters, diplomas, cups in the style of “the best third crawler of the year” and photographs with the “right” people.

But to revive the battery BS-714, or at least one gun court is not worth the titanic effort. Suitable tools B-13 are in the Novorossiysk Museum, and in the Zubkov Battery Museum, and in general 130-mm B-13 is a fairly common tool. And I do not even appeal to the conscience of the commanding persons, on the place of their conscience something else has long since grown up. I call at least to cunning and a sense of benefit - the same tourist area, at the same time and the road to build. But for now, somehow ...

Ctrl Enter
Noticed oshЫbku Highlight text and press. Ctrl + Enter
We are
Weekly summary (23-29 of January) on the military and social situation in the DPR from the military officer "Mag"Reports from the militia of New Russia for 27-28 September 2014 of the year
Military Reviewin Yandex News
Military Reviewin Google News
8 comments
Information
Dear reader, to leave comments on the publication, you must sign in.