A myth that myth-makers themselves do not believe in 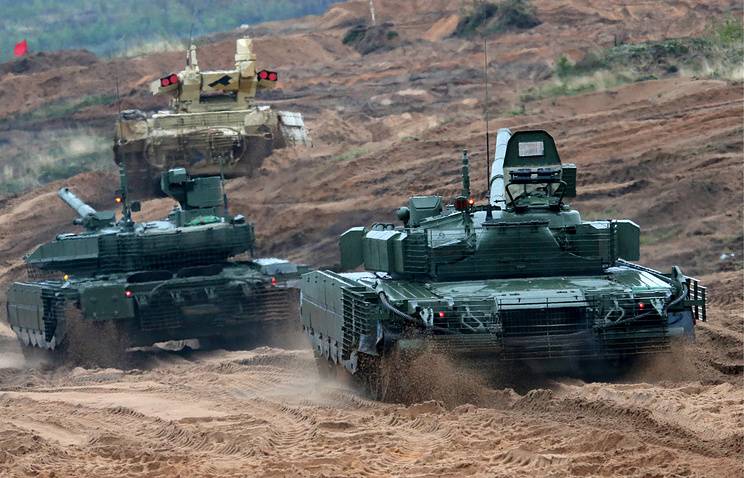 The other day, NATO Secretary General Jens Stoltenberg, in an interview with one of the authoritative Western editions of Foreign Policy, admitted in the most unequivocal terms that Russia does not militarily threaten any of the North Atlantic Alliance's 29. Moreover, he made it clear that such a “threat” is purely hypothetical.

F.P. : How will NATO respond if Russia does in the Baltic countries what it has done in Ukraine? "Little green people." Will NATO initiate an 5 article in this situation?

JS: First, we do not see any threat against any NATO ally, and therefore I always carefully reflect on hypothetical situations. But I can say that everything that happened in the Crimea and in Ukraine, of course, would provoke a response from the entire alliance, because NATO there protects and protects all allies from any threat.
If America Is First, Is NATO Second?

Thus, the official position of the NATO leadership was formulated quite clearly - the alliance does not see any military threat from Russia. And speculation on this topic is not willing to engage.

But then the next question arises. Perhaps, Mr. Stoltenberg simply put it miserably, gave his personal opinion as an official, or did he have any special reasons in this particular case not to pedal this topic? But in general, and in general, the Russian military threat in the West is felt, recognized and feared?

The whole text below will be devoted to the reasoned proof that Stoltenberg is not some white crow, but a completely typical representative of the modern Western “establishment”, which completely, completely, shares his point of view on Russia and on its absence military threat to the West.

In order to be convinced of this, it will be enough to consider the situation in the West today with one of the most important components of modern military power - armored troops, with facts and figures in hand. Which play a key role in all modern military conflicts, including those that rage literally before our eyes - in Syria and, most recently, in Iraq.

It was there that the tanks once again proved that the rumors about the loss of their former combat significance turned out to be greatly exaggerated. It was the side that relied on the penetrating power of the tanks that won victories in any land battle.
It would seem, in view of this fact, the European countries of NATO, allegedly threatened by Russia, and which the United States helps very little (what is one American tank brigade for the whole of Europe?), Should have taken extraordinary measures to dramatically strengthen their armored potential. . Moreover, they themselves are constantly saying about thousands of Russian tanks and about Putin’s colossal efforts to arm the Russian army with the latest models of armored vehicles. Including such a super modern tank as the T-14 "Armata", which has no analogues in the world.

However, there is no particular excitement in connection with the “Russian tank threat” in Western Europe, which is closest to Russia and, therefore, most vulnerable, oddly enough, is not observed. From the word at all. In order to make sure of this, it is enough to at least in general terms understand what is happening in this area. Moreover, practically nothing happens.

Suffice it to say that, at the present time, in none of the leading European member countries of NATO are main battle tanks manufactured at all. And in the arsenal of these three major powers - Britain, Germany and France there are an average of three hundred main battle tanks manufactured by 80-x - 90-s of the last century. That is, approximately - three tank divisions. For comparison, Hitler had more than thirty such divisions in 1941. And Stalin even more.

But maybe the above-mentioned countries, which at one time were too relaxed due to the loss of the “beloved enemy” in the person of the Soviet Union, now, after the Ukrainian events, finally recollected themselves? And began to accelerate the recovery of its tank fleet? Nothing like!

Over the four years of the Ukrainian crisis, which, according to Western mass propaganda, is "indisputable proof of Russia's aggressive intentions" in relation to the whole world, in the matter of recreating armored potential in key countries of Euro-NATO, what is called, the horse has not rolled.

Judge for yourself. Take the same UK. The last Challenger 2 tank was manufactured here in the 2004 year, after which the plant in Newcastle upon Tyne was closed and its personnel fired. Meanwhile, in the British ground forces from the 420, the 2 Challengers launched by industry remained in service around 220 machines.

Prospects? Yes, almost none. Every year, there are heated discussions on the subject of upgrading the remaining Challengers, according to this beautiful picture. 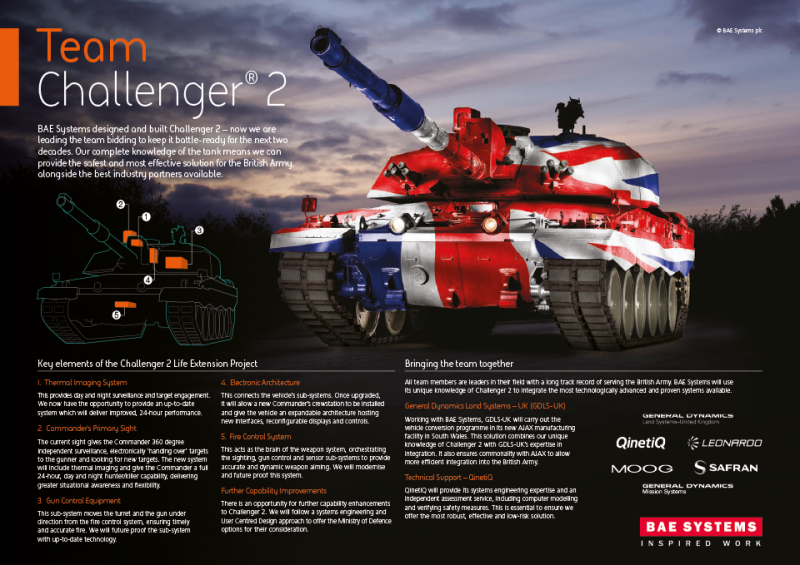 It seems to have agreed that by 2019 the project of this modernization will be approved. However, it is already clear that even the long-outdated cannon will not be replaced. And the whole thing will be reduced mainly to the installation of a new electronic filling, despite the fact that the tank itself will remain old.

But this is not enough! Today in Britain, the process of reorganization of the ground forces is in full swing, during which up to half of the remaining tank regiments will be transformed and reduced to mechanized strike brigades, in which tanks will be replaced with light AYAX vehicles or even armored vehicles. Just imagine what will happen if such a British "light armored cavalry brigade" will ever attack a full-fledged tank division of the "aggressive Russians" somewhere in the Baltic States. The British, as far as I know, simply adore the hunt for partridges. But I’m not sure if they will like it if they themselves turn out in the role of partridges in their armored car tins?

Military experts about this mysterious British reform write the following:

“Given the increased importance of tanks, as demonstrated by the wars in Iraq and Syria, as well as the battles in the east of Ukraine, the above decision may seem counterintuitive to the reduction of strike power” https://bmpd.livejournal.com/1685751.html 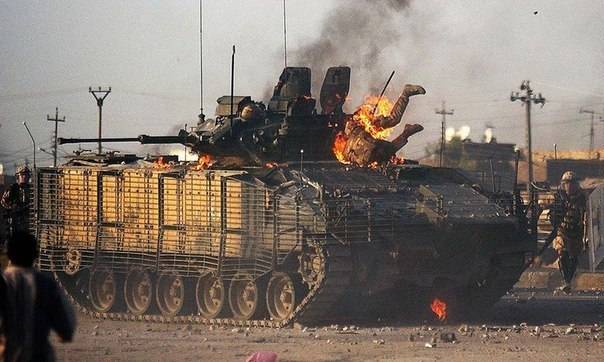 What else do we have there? Oh yeah - Germany. Another, allegedly frightened Putin to hiccup power. The Germans, on this occasion, scraped up some money to extract a hundred old 2 Leopards from the septic tanks of the first series. And they are going to upgrade them to the level of the newest "Leopard 2А7". Which in nature, apart from single experimental machines, does not exist at all. For the old veterans will be his iron. As a result, the tank fleet of the Heinz Guderian heirs somewhere by 2025 will increase to as many as three hundred combat units!

What are these “2 Leopards” as combat units, quite clearly demonstrates the experience of their combat use in Syria. 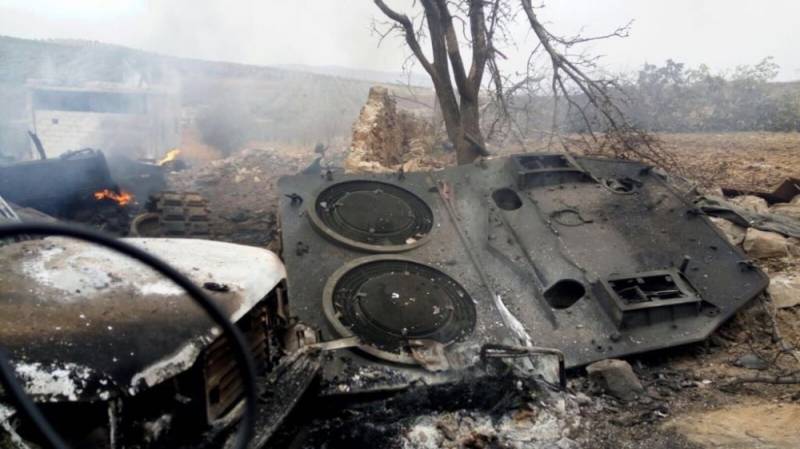 All that remains of the 2 A4 Leopard under Syrian Africa

Here is what the BMPD edition writes about this:

"Once again, it was clearly demonstrated that the previously so highly rated Leopard 2 tanks have a fatal design defect in placing the main part of the ammunition kit in the front left side of the hull, with weak side protection, which makes Leopard 2 a" bomb on the tracks "... Tank destruction For the first time, Leopard 2A4 as a result of an explosion in the front of the corps was marked on tanks lost by the Turkish army during the fighting against the Islamic State forces near the Syrian city of El-Bab in December 2016 of the year ”

Thus, the basis of the armored power of modern Germany is the “bomb on tracks”, which completely failed its main exam on the battlefield, even in the relatively primitive Syrian war.

And finally, the good old France. So kind that she even decided to develop a new main battle tank together with her eternal historical rival - Germany. But this is still progress, because the current French tank Leclerc was generally created with the money of the United Arab Emirates! And therefore, it probably came out so monstrously expensive that no one bought it other than the same oil sheikhs. The French army itself had enough money for only 350 pieces, while the minimum need for troops is estimated at 800-1000 vehicles. Since 2010, the release of these jewelry on tracks has been completely discontinued. 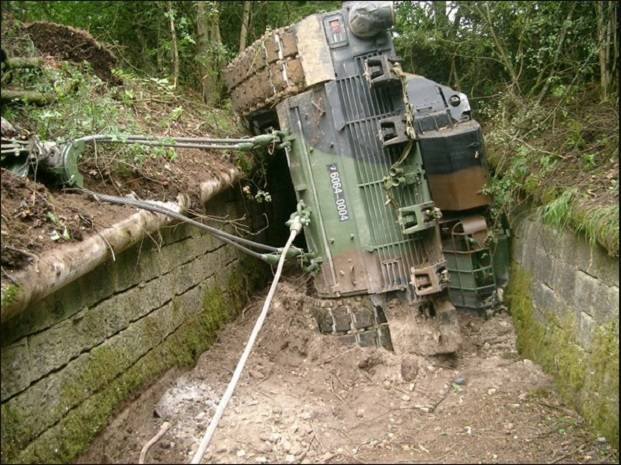 During the exercise, the French tank "Leclerc" drove a little wrong there.

As for the German-French “tank of the future”, the time of its appearance in the light of God is designated as “foreseeable perspective.” As far as it is observable, it can be judged by the fact that, according to the plans of the current modernization of cash "Leclerc", they are destined to serve as much as 2040 year!

Such, in general, is the picture of the “feverish military preparations” of the main NATO states of Europe against the background of the allegedly raging “Russian aggression” for four years. In the standing forest swamp, perhaps, you can sometimes notice even more signs of active life than in this pretend that is preparing to repel the attack of the Russians in Europe.

It turns out that they themselves do not believe in those terrible propaganda tales, which they also compose. Because if they believed, they probably would not have treated their own safety so carelessly. Why then do they fan this myth - you ask? The answer to this question is a topic for another conversation. But as we have just seen, this answer has nothing to do with the mythical “Russian aggression”.

Ctrl Enter
Noticed oshЫbku Highlight text and press. Ctrl + Enter
We are
Situational analysis of the death of the MH17 flight (Malaysian Boeing 777), made on the basis of engineering analysis from 15.08.2014Results of the week. "God forbid to see Russian revolt, senseless and merciless!"
Military Reviewin Yandex News
Military Reviewin Google News
75 comments
Information
Dear reader, to leave comments on the publication, you must sign in.