Reflections on the tragic fate of Marina Menshikova 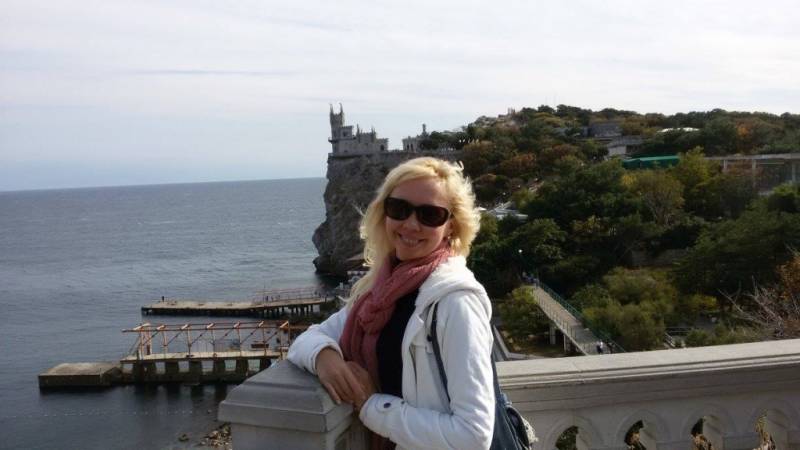 Thought we three. Citizens of Russia, LC and Ukraine. And in a circle they expressed their not very happy thoughts. Not particularly embarrassed in expressions, since almost 4 of the year is already familiar. We trust.

So, Marina Menshikova, a resident of Dnepr / Dnepropetrovsk, 26 February 2018, committed suicide in the cell of the Dneprovskiy SIZO.

Menshikova positioned herself as an activist of the “Russian world”, engaged in collecting assistance for the residents of Donbass. 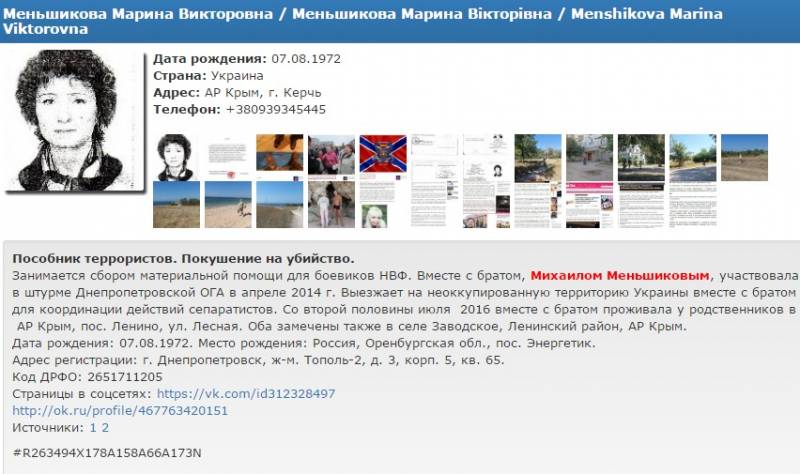 But the most famous was the incident with the participation of Menshikova in the Opera House of the Dnieper. October 22 2016 of the year Menshikov struck a blow to the head with a wooden hammer to the soldier of the Dnipro-1 regiment Konstantin Kravchenko.

Kravchenko got off lightly, there was also a kitchen knife in her purse ...

A criminal case was initiated under the article "Intentional minor bodily injury". The article does not provide for arrest, so there were no restrictions on the movement of Menshikova.

But the Ukrainian authorities have repeatedly made claims of Menshikova in terms of creating obstacles to the work of the investigation and evading testimony.

In 2017, for three months, Menshikov was in the Crimea, in the village of Lenino, with her father who had undergone the operation. On 4 (four) days the delay in the territory of the Russian Federation was delayed, and by decision of the Leninsky Court of the Republic of Kazakhstan, Menshikova was expelled to Ukraine and received a ban on 5 years crossing the border of the Russian Federation.

In January, 2018, the article of the prosecution was changed to a more serious one - “Hooliganism”. Menshikova ended up in the SIZO, where 26.02.2018 remained until her death.

Anna Starchevskaya, press secretary of the Dnipropetrovsk regional police department of Dnipro, said that there were three people in the cell with Menshikova. According to preliminary information, there were no conflicts with her cellmates. Menshikov's suicide occurred in the morning when the inmates slept.

The case against Menshikova will now be closed due to the death of the suspect.

Summary. One supporter of the "Russian world" has become less.

And here I would like to say a few words on a very delicate subject.

To begin with - a quote from the mayor of Dnepr Boris Filatov in his PB:

“At first you go to rallies for the“ Russian world ”. Then you run from the Dnieper to Kramatorsk. Then you go back and run from the police. Then you run to the Crimea, and your "Russian brothers" are deporting you back to Ukraine (!!!) ... "Russia will leave you, son. Always" (c) ".

Well, what can I say ... It is not the first time that we are already talking about this topic. And nothing has changed. The documents for which its citizens are being deported to Ukraine today were signed at the beginning of 2000's. To Maidan, to the fascist junta.

It was possible (and necessary) to revise them.

But no, our lawmakers have different tasks. Fuel excise is more important.

I did not want to be a prophet, but since I communicate today to a greater degree with the residents of Ukraine, I can draw conclusions. And they will quite normally confirm them after some time.

We lose both the territory and the souls of the citizens of Ukraine. Irrevocably. And in the place where the Russians used to be, tomorrow svidomity will grow, aimed against Russia. They will be cultivated purposefully and with the tacit consent of the majority.

Actually, this is already happening.

Russia's constant extradition of "its" Ukrainians is generally melancholy and sadness. The fact that Ukraine is heading for its final, namely, the fascist state, is clear and understandable. But when everything will fall into place, Russia will no longer have ANY leverage.

Living on the territory of Ukraine will simply be afraid to once again twitch in the direction of Russia.

But because Filatov, unfortunately, is right. And today, former anti-fascist fighters, if not subjected to persecution and persecution under the laws, it is only for now. And even then not everywhere. Russia and Kazakhstan. In the rest of the former republics, at least a couple of cases “for edification”. But there was.

But even 10, well, even to the maximum, 15 years, and we will have to deal with the giant people nedogosudarstva. Considering guilty us of all sins.

Oh no, there will be no direct war, of course. For this you need to have an army, that Ukraine is not yet shining. But the terror performed by the members of "Azov", "Donbass", "Dnipro" and other dirty tricks is easy.

But sooner or later it will be. While the war against ukrofashizm goes on the territory of the DNI and the LC. At most with the hands and lives of the inhabitants of the republics.

Attention, the question is essentially: can we afford to fight on our own territory? And the second question: can we so stupidly throw allies?

But tomorrow, all those who were on the front line yesterday just won't go there. Passed already. Precisely because the day after tomorrow (it doesn’t matter, by the way, where Ukraine, Moldova, Transnistria, Belarus, Armenia are blazing up) you will no longer be a fighter for the idea of ​​the “Russian world”, but a mercenary. Which should be judged and planted.

The choice is simply amazing. Either we sit and breathe evenly, or we do what conscience dictates. The result - prison bunks or dance in the morning with a sheet.

It is easy to predict that normal people will choose. And no matter how flared up, for example, in the Donbas in the spring of this year, you should not wait for volunteers.

And at the same time it is our problem. Because at such a pace the concept of “Russian world” will consist of Russia alone.