February 22 2018
3
On Sunday, February 18, when Orthodox Christians celebrated Pardon Sunday, Hungarian Prime Minister Viktor Orban delivered an annual address to the country. By tradition, his speech was purely political, but the Hungarian Prime Minister did not ignore the moral values ​​of the nation. “Christianity is Europe’s last hope,” Orban said. So he reacted to the rapid growth of the Muslim population, caused by uncontrolled migration. 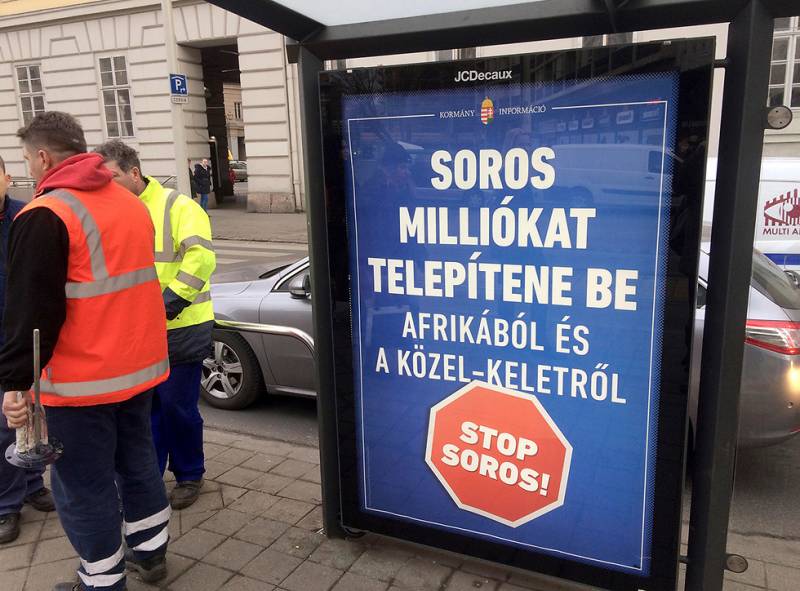 Retreat under pressure from Brussels

Victor Orban opposes her for a long time and consistently. He even entered into a conflict with Brussels, refusing to place refugees in Hungary according to European quotas. Now Orban again criticizes European officials. In his opinion, the migration policy of the European Union gradually leads to the predominance of the Muslim population in large European cities.

“Europe will not even notice that it has become a victim of an invasion,” the prime minister made a frightening conclusion and offered his solution at the national level. He threatened to close non-governmental non-profit organizations (NGOs) that protect the rights of asylum seekers in Hungary or just refugees.

“If they (NGOs - ed.) Do not stop their dangerous activities, we will simply expel them from the country, no matter how influential or rich they are,” Orban said. This passage in the speech of the premier interested experts. The fact is that behind the "influential and rich" NGOs is clearly visible the figure of the American billionaire George Soros. With him Orban long-standing accounts.

A native of Hungary, George Soros (György Shorosh), his fortune (last year Forbes estimated it at 25 billion dollars) made a lot of money for trading and financial speculation. Soros earned a certain respectability by creating a network of charitable organizations united under the brand “Soros Foundation” and with financial support from the followers of the so-called “global unlimited capitalism”.

The Open Society foundation created by Soros is engaged in this. He entered Hungary in the late eighties of the last century. The foundation was noted for the open support of the then dissidents and, according to Soros’s own statement, did a lot “to destroy the socialist regime in this country”.

Over time, the Soros structures grew into numerous NGOs, and the Central European University (CEU), founded by George Soros, appeared in Budapest. He also headed the University Council. Originally, the campuses of this school are also located in Prague and Warsaw.

However, the Czech authorities quickly felt that the CEU was not just claiming to train modern specialists, but was trying to influence the formation of the elite of the countries of accreditation. Soros, as they say, asked for things to go out. So the university received mainly Hungarian registration.

1500 students from one hundred countries of the world study here, but the main focus of CEU activities in Budapest was the creation of an “open society” in Hungary. Viktor Orban did not like this when, in 2010, the right-wing Hungarian civil union headed by him came to power.

By the way, Orban, too, fostered overseas billionaire. At the beginning of his political career, he studied for scholarships from the Soros Foundation. Now there is open war between Victor Orban and his former patron. It happened because of the strengthening of the national orientation of the Hungarian Prime Minister and his Civil Union.

Viktor Orban began to convince the Hungarians that "national and collective interests" take precedence over liberal and individualistic ideas that "are implanted by the harmful American financial speculator". The policy of the Hungarian Prime Minister entered the clinch with the tasks of the "Open Society". Soros began to look for a way to remove Orban from power. Orban - how to remove Soros from Hungary.

Last spring, the Hungarian prime minister succeeded in passing amendments to the law on education through parliament. They banned the activities in Hungary of "any foreign university that does not have an educational structure in its home country." The blow was directed against the Central European University of Soros.

CEU, although considered an American university, does not have its own training base in the United States. Orban seemed to have defeated Soros. However, the authorities in Brussels actively stood up for the American. We had a useful educational conversation with Viktor Orban, after which the Hungarian prime minister surrendered and removed restrictions from Soros University.

Now Orban is entering his new attempt to banish Soros from Hungary. This time he attacks the NGO American billionaire. Last year they were already restricted in their rights. In the summer of Hungary, the parliament of Hungary overwhelmingly passed a law allowing it to strengthen state control over foreign-funded nongovernmental organizations.

Under the new law, NGOs that annually receive more than 24 thousand euros from abroad have fallen under the law. They were obliged to submit annually a list of the most important foreign sponsors. But the main thing is that NGOs should be registered as “organizations benefiting from foreign funding”.

Failure to comply with these requirements entailed the closure of the organization. The new law was strongly condemned in the European Union and the UN. Moreover, in December, the European Commission filed for Hungary with the European Court of Justice. In the statement of claim, Budapest was accused of "violating European standards on the free movement of capital, which also applies to donations."

Following the results of the trial, the court may impose a fine on Hungary and even oblige it to amend the legislation. How this situation will develop further, experts do not risk predicting. After all, much will depend on the perseverance of the Hungarian authorities. Often her public statements differ from the practical policies agreed in the offices of Brussels.

An example of this is история with quotas for refugees. As the German Deutsche Welle reported, quite recently, the Hungarian Deputy Foreign Minister blurted out that in fact Budapest "secretly" accepted 1300 refugees. This figure roughly corresponds to the quota for refugees, which is loudly and publicly disputed by the Hungarian authorities.

Meanwhile, on Tuesday, February 20, in response to Viktor Orban’s speech, the parliament began to consider a bill that has already been called “Stop Soros” in Hungary. It has three main points. Firstly, all NGOs “promoting in any form of illegal migration” must pass a special registration and report in detail about their activities. NGOs will be fined or even closed for violating these requirements.

Secondly, NGOs that are more than half-funded from abroad will be obliged to pay an 25 percent penalty tax on all cash receipts. Finally, thirdly, citizens of Hungary suspected of “facilitating illegal migration” may be barred from approaching closer than 8 kilometers to the external border of the European Union, passing in Hungary.

The authorities will treat foreigners even more severely. With such suspicions, they simply refuse to enter Hungary. In accordance with the draft law, support for migrants by non-governmental organizations can be carried out only with the permission of the Ministry of Internal Affairs of the country. Otherwise, NGOs will be fined or dismissed.

Experts have no illusions. New initiatives by Viktor Orban and his party will not support the EU. Most likely, the new bill will cause more controversy than practical application. Because the positions of George Soros are strong enough in Europe, and it is not easy to reverse them. In the light of this, the third attempt by Viktor Orban to stop Soros is more oriented towards electoral tasks.

In April, Hungary will hold parliamentary elections. The current appeal of the leader of the ruling Hungarian party to national and even Christian values ​​should provide steady electoral support for Orban and his party members. First of all, the new legislative initiative of the Hungarian prime minister is aimed at this today.