The mythology of the Third Reich: the idea of ​​"pure blood" 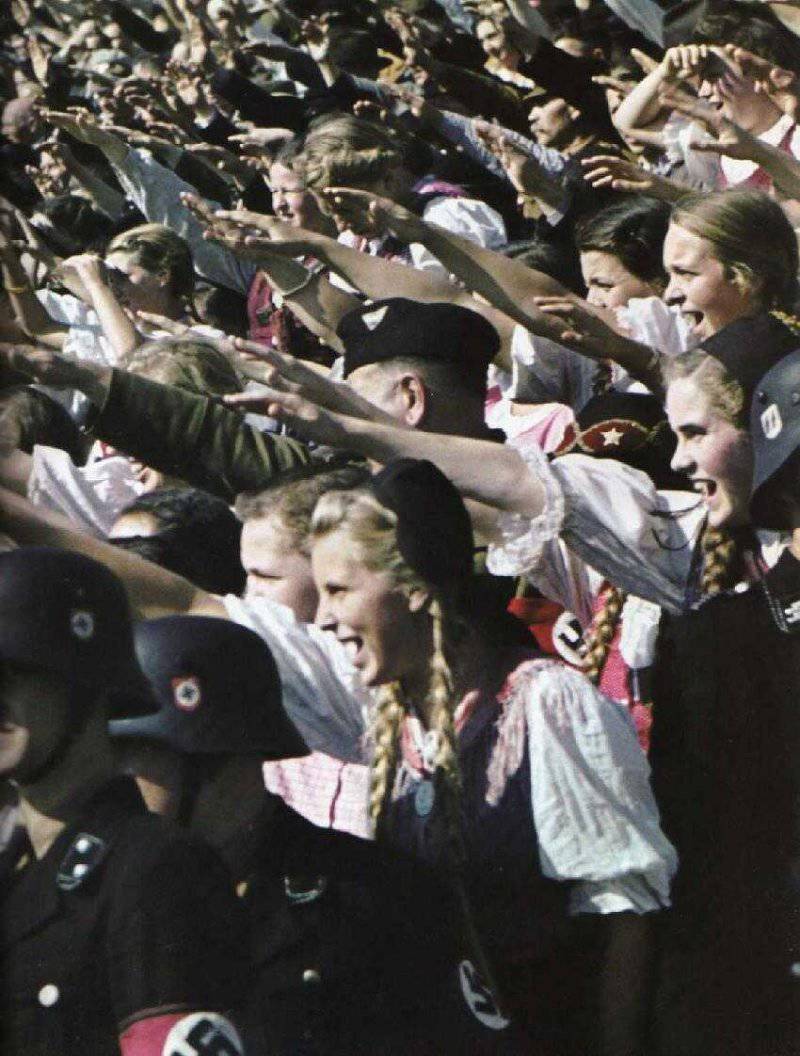 Russian citizens have heard quite a lot about German Nazism, but in reality they know little about the ideology of the Third Reich. People have a mess in their heads of images of Soviet-Russian films, caricature Germans from Hollywood films (often similar to mythical characters, monsters from hell). Unfortunately, for a part of modern European and Russian youth, the Hitlerite Nazis became role models.

In this article we will focus on the fundamental stone of the Third Reich ideology - the idea of ​​"pure blood." It should be noted that this “block” of Nazi mythology was not invented by them. All European colonialists, especially British Protestants, were racists. Racism and racial segregation flourished in the “stronghold of democracy” - the United States, long before the Third Reich, and survived after its fall. In the 19 century, European thinkers created "scientific racism" that divided races into "higher" and "lower". It was not for nothing that the English philosophy flourished in the elite of the Third Reich - the British Empire seemed to them an ideal state.

The concept of "pure blood" first appeared in the Spanish Inquisition. In the language of the Inquisition, to belong to pure blood meant to come neither from Jews, nor from the Moors, nor from heretics. In 1496, the status of "blood purity" was approved by Pope Alexander VI. He was introduced in monasteries, universities, and then other areas of Spanish society, prohibiting education and employment of any position to people who had among the ancestors of Arabs, Moors, Jews. An interesting fact is that the struggle for "blood purity" was carried out by the great inquisitor of Spain, Thomas Torquemada, who himself came from the Spanish kind of baptized Jews (immediately recall reports of the origin of a number of high-ranking Nazis in the Third Reich). Jews are expelled from Spain (1492 year), then the Moors (1502 year). The reprisals included Moriscos (Moors who converted to Christianity and their descendants), marans (Jews who accepted Christianity and their descendants).

Usually, when the Third Reich is remembered, the ideology of anti-Semitism immediately pops up. After the Second World War, the world media did a great job of introducing the "primacy" of the sufferings of the Jewish people into the consciousness of the "primacy". Although the ideology of the Reich "Jewish question" was not the main. For example, the SS Reichsführer Heinrich Himmler said in April 1943 of the year: “For us ... the starting point is the blood issue. We were the first to truly solve the blood problem in practice, and, in this connection, by the blood problem we, of course, do not mean anti-Semitism. Anti-Semitism is exactly the same as disinfection. This is a matter of purity. Thus, anti-Semitism for us is not a matter of ideology, but a matter of purity ... ”. You can read about this in the “bible” of German Nazism - the book “My Struggle” by Adolf Hitler. Hitler repeatedly refers to the fact that “only one of the problems is of decisive importance: the problem of the racial preservation of the people. The degree of blood purity alone determines the strength or weakness of people. ” In his opinion, "all other problems play a ridiculously small role compared to racial ones." All other questions are of temporary importance, and the problem of "blood purity will exist as long as man himself exists." As a result, “we know only one sacred human right, which is at the same time its sacred duty; a person must be vigilant in ensuring that his blood remains clean. ”

The worst crime, according to the ideologues of Nazism, was the "mixing of blood." As the most prominent ideologist of the Reich, Alfred Rosenberg, wrote in “The Myth of the 20 of the Century,” not only individuals, but entire civilizations, races, are dying from this “blood shame”. One of the consequences of this ideology was the alignment of the state-public hierarchy in accordance with the principle of "blood purity". Ideally, only people with “pure blood” could receive a full-fledged education and the highest posts in the empire, citizens with “mixed blood” were affected in their rights, and people with “someone else's blood” could be expelled or killed, turned into slaves.

15 January 1935 was issued a decree "On the hereditary doctrine and racial theory in the framework of school activities." It was recommended to start classes on racial issues for children from 6 years, relevant textbooks were printed, and teacher retraining courses were organized. In September 1935, two “racial laws” (the so-called “Nuremberg laws”) were adopted at the party congress of the NSDAP in Nuremberg. It was the “Law on the Protection of German Blood and German Honor” and the “Law on Citizenship of the Reich”. The first law prohibited marriage and extra-marital relations between citizens of German or kindred blood with Jews. The punishment for "desecrating the race" - marriage, were hard labor. For extramarital affairs were punished with imprisonment or hard labor. The second law established that only a person with Germanic or related blood could become a citizen of the Third Reich. In November, the law was supplemented: Jews now could not be citizens of the Reich and lost their right to vote on political issues, the right to hold public office.

To reduce racial legislation only to anti-Semitic laws is wrong. "Race laws" only marked the beginning of a well-thought-out system of various restrictions and prohibitions. In November, the law banning marriages between Germans and Jews was extended to blacks and gypsies (and their descendants). Although, in principle, there could be exceptions, the law provided for special permits for marriages with “alien blood” carriers. After the seizure of Slavic states, Czechoslovakia and Poland, in 1939, restrictions appeared against the mixing of blood with their inhabitants. 23 November 1940 of the year issued an order signed by the Deputy Fuhrer Martin Bormann, which prohibited marrying Polish and Czech peasants to members of the Nazi Party (National Socialist German Workers' Party). In addition, members of the NSDAP and other important organizations (the SS, the National Socialist Motorized Corps, the National Socialist Union of Teachers, etc.) required the permission of a local gauleiter to marry representatives of the Polish, Czech, Hungarian peoples. Soon this instruction was extended to all strata of the German population. For example, in the Hitler Youth in 1939 there were 8,7 million people (with the number of German youth in the beginning of 1939 year in 8,8 million people), and in 1940, membership in this organization became compulsory for young Germans. Since April 1940, all German youths aged 10-18 have been obliged to join the Hitler Youth.

Thus, in 1940, the Slavs (and, in part, the Hungarians) were equated with the Jews. Himmler in October 1943 described the Slavs (from his speech, the future of the Slavic peoples looked quite sad) as "a mixture of peoples from lower races with splashes of Nordic blood, incapable of maintaining order and self-government." After the occupation of Denmark, Norway, Holland, Belgium, parts of France, laws appear that impede marriages with the inhabitants of these territories. According to the secret directive of the Chief of Staff of the Supreme Command of the German armed forces from 26 in January 1942, soldiers could get permission to marry citizens of the “Nordic” countries of Holland, Norway, Denmark, Sweden (they were later credited with Belgium and Finland) only with the permission of the Fuhrer. On the Eastern Front, marriages with local residents were completely prohibited. Even any sexual contacts were banned - it is clear that this order was not respected, both voluntary and forced sexual relations with the local population were recorded. The occupants acted on the principle “war will write off everything.” The ban on sexual intercourse was relaxed only for Estonians and Latvians, given the massive recording of those in the SS troops and police forces. But the ban was maintained against the Lithuanians. Himmler wrote that this "people behave badly and has such a low racial value that lifting the ban is unreasonable and unjustified."

"Pure blood" was for the ideologues of Nazism and religious significance. Alfred Rosenberg in “The Myth of the 20 of the Century” spoke about the “religion of blood”, a new belief in the divine essence of people, which will replace Christianity.

The Germans in the representation of the Nazi leadership were so-called. “Blood flow”, like other nations. In the collision of such “flows” there could be no moral criteria. The people of "alien blood" was necessary to push and destroy. Every German was a “drop of blood in the bloodstream” and was not personally responsible. October 4 1943, Himmler speaking in Poznan to the top leadership of the SS, said: “Our people were embraced by alien peoples and because of them forgot their heritage. Alien flows of blood flowed into our people, but he, despite the terrible difficulties and terrible blows of fate, retained strength at the very foundation of the blood in order to win through this. ”

Therefore, taking into account this fact, the German leadership was going to “liberate” the Crimea and all the surrounding areas from all “outsiders” and settle them with Germans, since in the 2 century BC. er Goths were noted there. In 1942, the Ost General Plan referred to the creation of Gotengau (“Gotha Region”) on the lower Dnieper and in the Crimea.

It must be shown that the denial of the norms of modern civilization is one of the peculiarities of the Nazi ideology. The ideologists of the Reich opposed modern civilization to them, “civilized” people who were told that they could live contrary to the laws of nature, “heroic antiquity”.

Of course, the idea of ​​"blood purity" was a myth with which the future of the Millennial Reich was built. A significant part of the Germans, especially in Central, East Germany and Austria, were descendants of Germanized Western Slavs — numerous unions of the Lutichi, Obodrich tribes, and others. Prussia was the core of the future German Empire at the time of the death of Frederick II the Great, had in its population up to a third of the colonists and their descendants . Friedrich Wilhelm I of Brandenburg (1620 - 1688) nicknamed the Great Elector, founder of the Brandenburg-Prussian state, in his domestic policy was very tolerant of various religious minorities and in every way encouraged the arrival of the colonists. The country was terribly ravaged by the Thirty Years War (1618-1648), only the Brandenburg brand lost 140 thousand from 300 thousand. Entire areas were turned into deserts. Frederick William opened to the country wide access to all homeless exiles, roving soldiers and even robbers who wanted to again turn to honest people. The great Elector sheltered thousands of French Huguenots, Jews, representatives of various Protestant minorities and sects. Among the settlers were the Dutch, the Poles, the Czechs. As a result of the enormous work of the Prussian government over several generations, Prussia has become one of the leading powers in Europe. True, we must take into account the fact that the colonists were representatives of European culture and were easily integrated in Prussia. By the end of the 19 century, the descendants of the French, the Dutch, the Poles, and the Czechs sincerely considered themselves "real Germans." Violent industrialization destroyed the last islands of original culture in the countryside and small towns. A similar policy was successfully carried out in Russia, when colonists from Europe (the same Germans) were invited to develop Novorossia and other territories.

Ctrl Enter
Noticed a mistake Highlight text and press. Ctrl + Enter
We are
The artist, the wanderer, the warrior. Vasily Vasilyevich Vereshchagin. 110 years from the date of deathHitler's plans for the United States
26 comments
Information
Dear reader, to leave comments on the publication, you must to register.