Will German soldiers "hold back Russia"?

February 22 2018
52
In Germany, came up with a response to the "aggressor." This is what? Russia. Twelve thousand German soldiers will go to NATO exercises. The purpose of the exercise is “containment of Russia”. German burghers will pay for teaching 90 million euros. The reason for the costly exercises is the Kremlin’s “aggressive policy”. 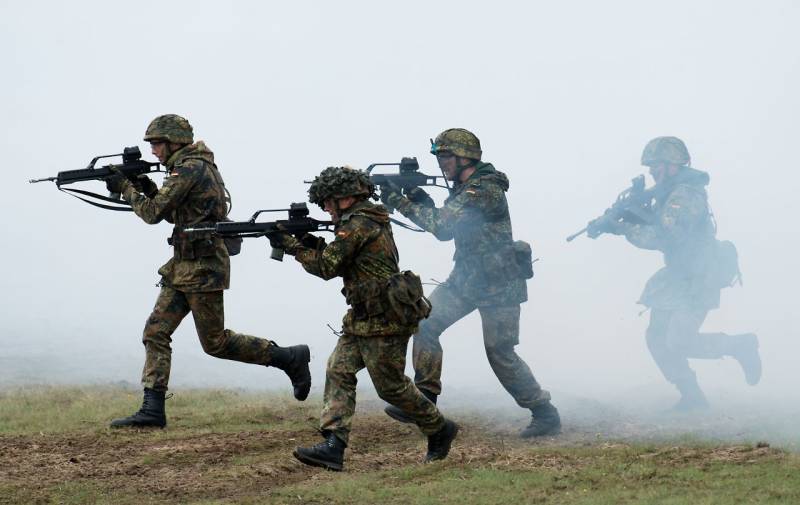 The Bundeswehr will take part in 2018 year in military maneuvers aimed at "deterring Russia". The maneuvers will go three times more soldiers than in the previous year.

Around 12.000 soldier, reports Focus.de, will go to the teachings, called "Sword Shot", "Fire Thunder" and "Iron Wolf". The exercise will take place in the eastern and northern territories of NATO. Exercise costs will be approximately 90 million euros.

The main reason for the increased activity of military maneuvers is the policy of Russia, which is perceived as "aggressive." In particular, the newspaper notes, Lithuania, Latvia, Estonia and Poland feel the threat from Russia since Russia annexed the Crimea (2014 year).

Military maneuvers should send a “clear signal” to the main person from the Kremlin, Vladimir Putin. He must learn: intervening in the affairs of any of the NATO countries will have "serious consequences."

Increasing the number of participants in military maneuvers is also due to the fact that NATO exercises themselves will be the largest in many years.

In total, the “Trident Juncture” maneuvers (“Single Trident”) will involve a total of from 30000 to 40000 military personnel, including about 8000 soldiers from Germany.

90 million euros, we note, the amount is very large for the exercises. As well as the number of troops in 12000 people. Last year, Germany exposed all 4000 soldiers and spent 50 million euros.

"The Bundeswehr will help to contain Russia on the eastern flank of NATO" - under this title came the material on "German wave".

It is stated that the United Trident maneuvers will take place from October 25 to November 23 2018 in Norway, in the Baltic Sea and in the north of the Atlantic Ocean. According to NATO leaders, the maneuvers "will provide conditions for testing, debugging and further developing the existing or new potential."

Conceived teachings, we note, fit well into the concept of a new cold war that the West is waging against Russia. Germany is also participating in it, despite gas deals with Russia. Business and energy security should probably not be confused with politics. We buy gas from you, we dream of easing the sanctions, but we will set up a soldier against the “aggressor”, because the Poles are afraid of you. About this formula fit the actions of the defense department of Germany.

The concept of a new cold war is no longer built on the opposition of advanced democracy with its freedoms and Coke to the totalitarian or authoritarian USSR, which Mr. Reagan called the “evil empire”. No, the Soviet Union collapsed, its social achievements are living the last days, Coca-Cola is sold at any kiosk, the current Communist Party of Comrade. Zyuganov is not very popular, citizens have no desire for communism, and indeed no ideology other than a young and successful one, in Russia there is no: there is wild capitalism around, sometimes tightly fused with power. Therefore, the basis of the new confrontation needed to inject money into the US economy, primarily in the military-industrial complex (Trump's plan to “make America great again”), took the Crimea. They say that the Russians undertook to redraw the boundaries.

By the way, Mr. Obama denied the new cold war. Now, however, very few people remember this, including Obama himself. And Mr. Trump not only fulfills the program of Mr. Obama on sanctions and arming Europe, but is also ready to arm Ukraine, which the peacemaker Obama did not dare.

The concept of the new cold war was confirmed in the report of the Munich Security Conference. In general, the Munich “theses” themselves became a kind of symbolic: after all, the West remembers Putin’s “Munich speech” (2007) and regards it as a reference point in the geopolitical “turn” of Russia. It’s no joke: Putin dared to object to the USA itself and informed the world about the unacceptability of the so-called unipolar model of the world!

"For the modern world, a unipolar model is not only unacceptable, but impossible at all."

"The entire system of law of one state, first of all, of course, the United States, has stepped over its national borders in all spheres: in the economy, in politics, and in the humanitarian sphere it is imposed on other states."

"What happened to those assurances that were given by Western partners after the dissolution of the Warsaw Pact?"

The West has never liked criticism in its address - since the time of the USSR. He did not favor the West and Russia, especially in the form of a strong USSR. And here it is:

“Russia is a country with more than a thousand years historyand almost always she enjoyed the privilege of pursuing an independent foreign policy. We are not going to change this tradition today. ”

It turns out that Putin seems to have stepped onto a slippery, almost Soviet way. And in the 2014 year, after the Crimea, the West remembered this to Putin. There were speeches about “aggression”, “reshaping borders for the first time after World War II”, “revanchism” and even “attempts to revive the USSR” (this was mentioned, in particular, by Madame Clinton). Everyone remembers these hot speeches of Western politicians, it makes no sense to quote further.

After 2014, the West started talking about a likely conflict with Russia. The ridiculous record of the Reagan times about the “evil empire” and the senseless assumptions about the coming seizure of the Baltic countries, Poland and even Finland by the Russians were taken as the basis for this ridiculous propaganda. And Sweden was alarmed. And the Spaniards managed through the press to accuse the Kremlin of a referendum in Catalonia! And even the prime minister in Malta discovered the “Russian trace” when he was accused of corruption. However, other Russian patriots got so many Maltese passports that the accusation is not surprising.

Not so much today they are talking about a third world war (you will agree, this is a topic for fiction rather than for the media), as about an unintended conflict between NATO and Russia. An accidental blow, someone accidentally pressed a button, planes accidentally met in the sky, accidentally found the wrong target of a rocket ... You never mind! In response to the blow, the other side should strike, and now the real war has begun.

The compilers of the report of the Munich Security Conference just talk about increasing the risk of collision: they say, the parties do not observe agreements on arms control, they are deploying additional forces, tensions are growing around military exercises. One miscalculation - and the war begins.

And if during the days of the old cold war, the parties had a whole policy to prevent accidental clashes and there were a number of ways to conduct urgent negotiations, now the situation has become so acute that it’s not possible to speak of any normalization.

At the same time, the report of the Munich Security Conference avoids the topic of NATO enlargement to the east - the very one that Putin said eleven years ago in Munich. “Iskander” in the Kaliningrad region is not an attack on the West, it’s Putin’s reaction to the Western strategy of “containment”, the one that the German defense ministry is now advocating, wishing to spend 90 million euros of taxpayers money on training to combat the mythical Russian “aggression” ".

The arms race, which is a relic of the Cold War, is dangerous because both sides will be guilty over time. There is nothing to be done here, but behind each step of the first side there is a step of the side of the second, then a new step of the side of the first, and so on, incrementally. The arms race is at the same time a means to create jobs and revive the industry, but at the same time it creates a heavy military ballast, which, after construction, must be maintained and maintained financially, and the living force must be kept in a proper fighting tone. This is an endlessly exhausting budget, and this budget is felt on its shoulders by taxpayer partners. One of the reasons for the collapse of the USSR was the bloated military budget. And today, competition with the United States can lead to sad consequences for a country dependent on oil and gas exports. However, the most joyous times for the US have also come: trillions of public debt, which are a consequence of Reagan’s policy and his followers like Bush Jr., will sooner or later affect the financial position of a superpower, whose debt papers are very fond of buying by Russians and Chinese (though both Russia and China are officially recorded by Trump in strategic opponents).

As for the Germans, then, fortunately, there are sensible politicians among them, who not only advocate the easing of sanctions against Russia, but also do not wish to welcome American soldiers and equipment on their lands. In the end, Mr. Trump has done a lot to make the US quarrel with Europe, and especially with Germany, and therefore it is possible that the Cold War and the arms race will decline. Poles can not worry: Putin does not gather an army to march on Warsaw.

Ctrl Enter
Noticed oshЫbku Highlight text and press. Ctrl + Enter
We are
Results of the week. There are too many Russia in the worldThe action “Military service under the contract is your choice!” In Rostov-on-Don: future contract servicemen, exhibitions and “Russian Knights”
Military Reviewin Yandex News
Military Reviewin Google News
52 comments
Information
Dear reader, to leave comments on the publication, you must sign in.