February 26 2018
14
Coastal artillery batteries of the Crimea or, say, the legendary battery of captain Andrei Zubkov are quite well known. On their base there are museums, guided tours, and information about these artifacts of the whole epoch is more than publicly available - from literary works to entire Internet sites. And this is good. But, unfortunately, there is a long series of artillery batteries, completely undeservedly overlooked. And this is despite the fact that they have made no less significant contribution to the defeat of the German fascist invaders and their henchmen, and the heroism shown by the personnel is beyond doubt.


One such coastal battery, which has not received such widespread public attention, is the stationary coastal 714 battery. You can, of course, find out about it in the Gelendzhik Museum or find a couple of pages of information on the web - this will be either a very specific site or a local Internet resource that does not claim to be of all-Russian fame and attendance. And this is assuming that you are aware of the very existence of the battery and its number.

History The BS-714 (it is under this name that the battery appears in the documentation of the Novorossiysk naval base of the Black Sea Fleet) began a year before the war, in the 1940 year. It was decided to place the battery in such a way that it simultaneously covered the entrance both to Gelendzhik Bay and to Tsemesskaya (Novorossiysk) Bay. In connection with the solution of these problems, the position of the future battery was chosen. It was supposed to be located in the Rybatskoy (now Blue) Bay area northwest of Gelendzhik. This allowed defensive fire in both directions. The coastal artillery of the Novorossiysk naval base, which ultimately played a more than significant role in the defense of our Black Sea coast, was strengthened with all its forces. 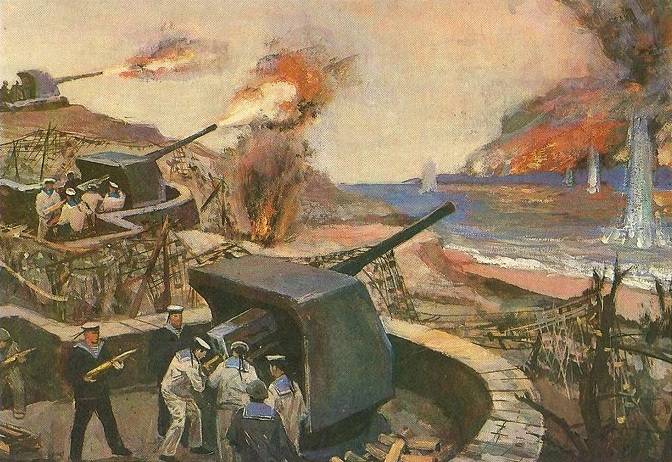 In June, 40-st on the rocky shore of Fisherman's Bay near the village of Solntsedar (now does not exist, completely absorbed by Gelendzhik, was located between Fisherman's and Gelendzhik bays) work began. The gunners almost all day and night cut down the thorny shrubs of the hold-tree, in order to bite into the rocky rock. Digging up tons of rock for cannons, cellars and cockpits, the gunners of the 714, as later their colleagues with the 394 (Zubkovo) batteries, mastered the professions of bricklayers, carpenters, etc. By the way, one of the first builders of the battery was Andrei Zubkov. Together with his alma mater comrades, the Naval Artillery School named after the Lenin Komsomol of Ukraine (Sevastopol) - captain Klimov, lieutenant Koshelev and political officer Solovyov actually built 714. Zubkov himself will soon become an assistant to the commander of the battery. 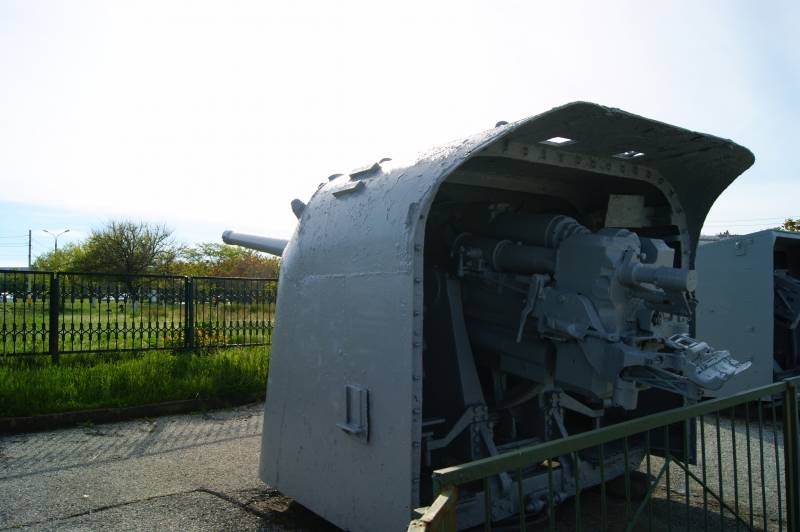 B-13. Museum of military technology. Novorossiysk

Finally, one early morning, the tractors delivered to the equipped positions the main battery implements - 3 130-mm ship implements B-13. B-13 were the most common medium-sized naval guns of their time, used by our Navy both on water and on land. They began to produce them at the Leningrad plant "Bolshevik", hence, literally, the letter index. The letters “MA” (naval artillery) were carved on the trunks of the B-13 guns, so the sailors nicknamed them “Masha”. Despite such affectionate nickname, Masha threw presents weighing over 33 kg over a distance of 25,5 kilometers. The mounted guns rotated all 360 degrees, firing in any desired direction, and most importantly, blocking Tsemessky and Gelendzhik coves with defensive fire.

In addition to the main 130-mm guns, the battery had one 45-mm gun, three mortars and six machine guns. 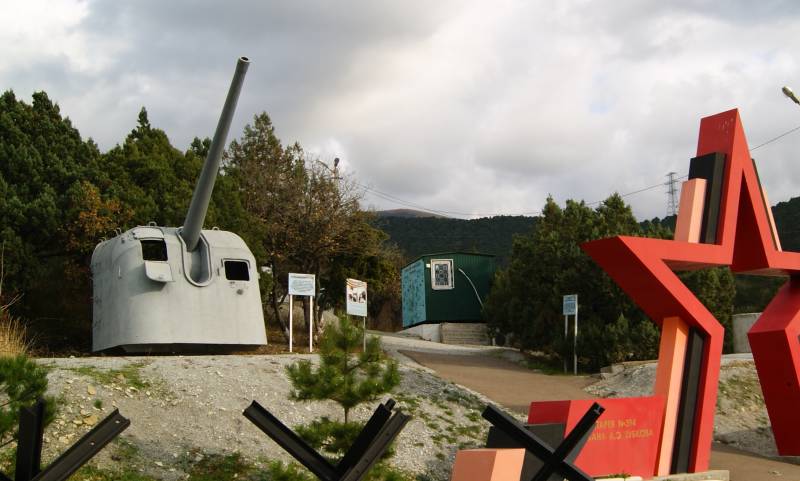 B-13. Museum "Battery No. XXUMX of Captain AE Zubkov

The first commander of the battery was appointed captain Klimov, his assistant was Andrei Zubkov. But this tandem was destined to exist for long. Andrei Zubkov fell at the helm of his own legendary battery, and Captain Klimov was replaced.

On March 25, 1941, a new commander arrived at the 714th battery - Senior Lieutenant Mikhail Petrovich Chelak. Mikhail was born in Ukraine in the village of Vasilyevka, located in the Dnipropetrovsk region of the Solonyansky district, in 1914. Granite military science nibbled in Sevastopol, like many naval artillerymen of the Black Sea fleet. 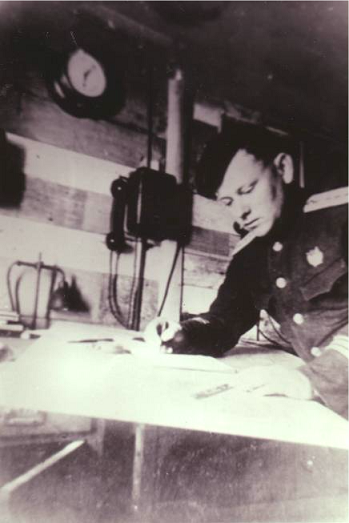 Some sources indicate that the 714 battery was part of the 117-th separate artillery battalion (OAD), which is a fact, because in the award lists of the personnel there are relevant data. However, many documents of the Novorossiysk Navy Wartime, in which 714 is mentioned, it is part of the 1-th OAD (later 1-th OAD will be given the title of Guards) major Mikhail Matushenko (in the future, the colonel and order-bearer). It was not possible to clarify when the divisions were reorganized, but in November 1942 was mentioned in one of the documents by Chelak as the commander of the 714 of the 1 of the OAD. 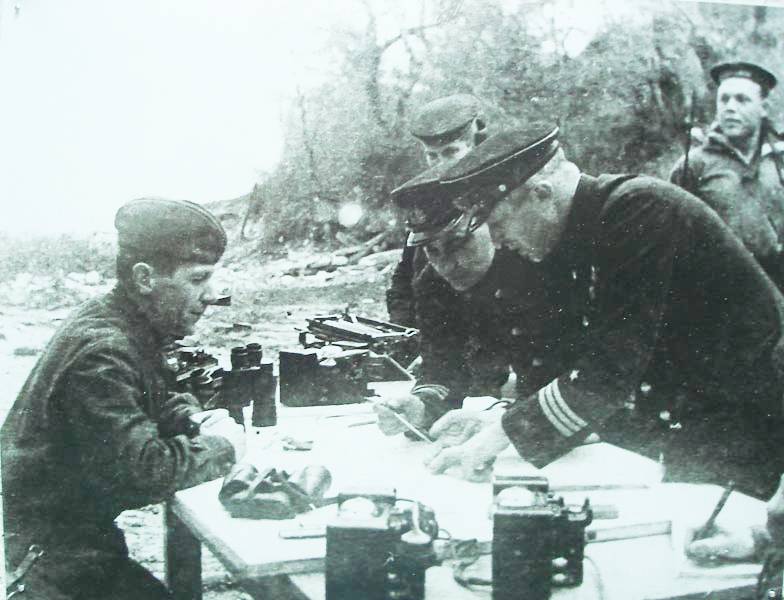 On the KP artillery NBMB. Mikhail Matushenko on the right

One way or another, active preparation for combat began on the battery. Like Zubkov later, the gunners of the 714, as the front was approaching, had to master shooting at ground targets. But besides the purely military tasks before the battery, a new problem arose. Spring rains and peculiar to the locality not less rainy June turned part of the buildings, simply dug into the rocky shore, into ghost candles. Despite the rocky terrain of the terrain, near the shore, the stone-treskun (marl) was actively washed out, so all facilities were promptly and thoroughly dressed in concrete, which, as it turns out later, will not completely solve the problems with flooding. In addition, the sailors had to carefully work on camouflage, and the war was already breathing in the back of the head.

22 June with the first tragic news from the war that fell on our power 714-I coastal battery was on full alert. But before the first combat volley there was more than a year. 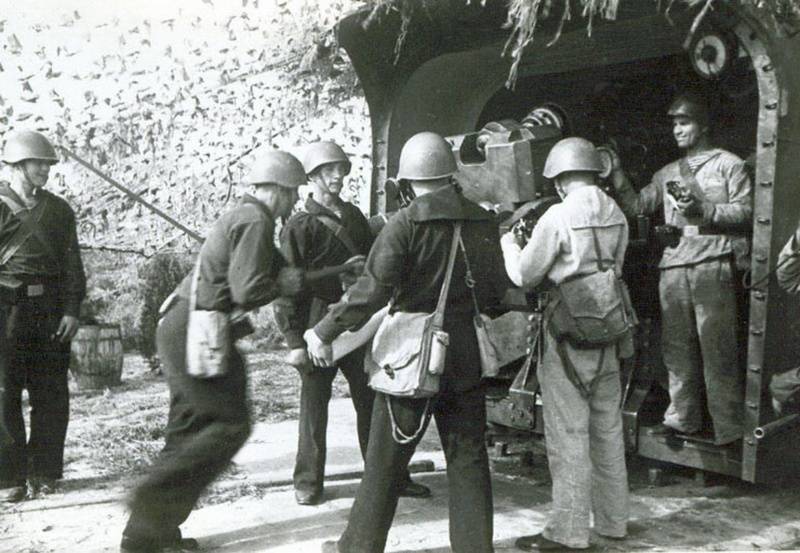 Black Sea gunners firing from the gun B-13

On August 23, 1942, the spotter, foreman Alexander Goryainov, reports to the 714th commander Chelak that he observes the movement of enemy troops along the road from Abinskaya to Shapsugskaya, i.e. enters the affected area of ​​the battery guns. But, taking into account the terrain, the Chelak battery will have to fire through the Markotkh ridge according to the correction of Goryainov. Despite this, in the first battle, the battery destroyed up to 3 tanks, not counting the infantry. For the entire period of the corrective work of the foreman Goryainov from August 23 to September 14, 1942, the artillerymen destroyed 5 enemy tanks, 2 mortar batteries, 2 artillery batteries, 7 vehicles and ammunition supply, not counting the equipment incapacitated, and the dead personnel of the enemy . For his adjustment, Goryainov received the medal “For Courage”.

So for the commander of the battery, Mikhail Chelak, the war began, but for the very 714 months of heroic daily labor, of which only crumbs of memories will remain. Even the exact location of the masculine battery will be recorded by the winds of history and covered with fog. Where you were, how you lived and whether the position of the 714 on the ground itself near Fisherman’s Bay left its mark, read in the following sections.

Ctrl Enter
Noticed oshЫbku Highlight text and press. Ctrl + Enter
We are
Results of the week. "Everything! Kina will not be! Electricity is over! ”Historical Sevastopol: oddities, explanations and answers to readers' questions
Military Reviewin Yandex News
Military Reviewin Google News
14 comments
Information
Dear reader, to leave comments on the publication, you must sign in.