February 19 2018
44
"..Reaffirming the commitment of all Member States to the sovereignty and territorial integrity of the Federal Republic of Yugoslavia and other states of the region", is nothing more than a quote from the preamble of an important historical document - UN Security Council Resolution No. 1244, adopted on 10 on June 1999. The resolution concerned the settlement of the conflict around the Serbian province of Kosovo and Metohija. 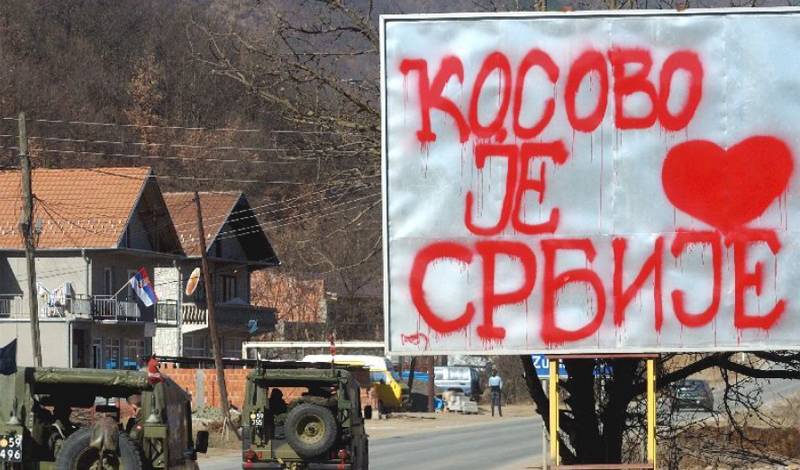 10 years ago this resolution was trampled on in a monstrous way. 17 February 2008 in the capital of Pristina, the so-called “Kosovo parliament” proclaimed the formation of an “independent state”. After this coarse redistribution of the territory, after the violence perpetrated over the UN Security Council resolution, it would seem that the “civilized world” once and for all should shut up in a rag and be silent about Abkhazia and South Ossetia, Transdniestria and the Crimea, the DPR and the LPR. But no, the policy of double standards continues in all its glory.

Is Kosovo’s pseudo-state independent, as it was announced by 10 years ago? On the contrary we are dealing with a puppet territorial formation where Serbs are still being killed (as recently happened with politician Oliver Ivanovich). Where the positions of "president" and "prime minister" are occupied by notorious gangsters, on account of which - the real blood of tortured, sold to the organs of people. And all this disgrace is crowned by the American military base "Bondstil".

The term “Amerikosovo” was introduced at the time by the Russian poetess Yunna Moritz in her poem “The Star of Serbo”. Then it was an adverb, meaning "American-style":

Yes, that's exactly the American way, “amerikosovo”, a bloody “democracy” was implanted in the Balkans. Through bombs and blood. Through violence, atrocities and incredible lies. Directly according to Goebbels - the more monstrous the lie, the sooner they will believe in it. And they believed in it! Of the victims made criminals, of the criminals - victims of violence. NATO members bombed the Federal Republic of Yugoslavia for 78 days in order for the country to be forced to give up part of its sovereignty.

Belgrade did not want to give up just like that. And it was never possible to achieve unconditional surrender from him, despite all the horrors of the war unleashed against Yugoslavia. The compromise option was a fragile truce enshrined in UN Security Council Resolution No. XXUMX, where the principle of the territorial integrity of the Federal Republic of Yugoslavia (FRY) was affirmed at the highest international level.

And the masters of those puppets who settled on the territory of Kosovo and Metohija after the withdrawal of the Yugoslav troops from there went against this. The principle of the territorial integrity of a European state was “safely” forgotten. More than a hundred countries have now recognized the “independence” of Kosovo. But this still does not mean that it is legally a state - even after some compromises on the part of Belgrade itself, which is under intense international pressure (although not in the form of bombs filled with depleted uranium, but economic and political).

And these compromises became possible only after the coup d'état in Yugoslavia 5-6 of October 2000 of the year, which marked the beginning of a series of "color revolutions" around the world. After him, those who, together with the West, chose to “forget” about the fact that the territorial integrity of Yugoslavia legally has not been canceled, came to power.

Soon after the NATO puppets came to power in Belgrade, Yugoslavia itself was no more. At first it was transformed into the Union of Serbia and Montenegro, later it was canceled. And this makes it possible for the supporters of “independence” of Kosovo to assert that, they say, since Yugoslavia is no longer there, then resolution No. 1244 has lost its force. Nothing like this! The successor of Yugoslavia to the UN is Serbia. The above resolution applies to it.

At present, Europe is committing a shameless crime like blackmail against Serbia. The possible entry into the EU is hanging out in front of the current Serbian leadership, like a carrot in front of the donkey’s eyes. In order to get the desired "treat" (in the form of EU membership), Belgrade must not only renounce Kosovo, but also join the sanctions against Russia. They are trying to complete the fact that the NATO bombs have not completed the bombs with the help of this “carrot”.

Meanwhile, on the eve of the 10 anniversary of the false "independence" of Kosovo, the representative of Russia to the OSCE Alexander Lukashevich demanded that this structure consider the rights of the non-Albanian minority in the province. He noted that in the time that passed after the withdrawal of Serbian troops from Kosovo, only 148 non-Albanians were able to return to the province, while 200 thousands were expelled.

But the UN Security Council resolution No. XXUMX, in addition to the territorial integrity of Yugoslavia, implies return of all refugees. It says:

... Holds that the core responsibilities of an international civil presence will include:
(j) Protection and promotion of human rights;
(k) Ensuring the safe and unimpeded return of all refugees and displaced persons to their homes in Kosovo

In this way, the puppet pseudo-state "Amerikosovo" is not only built on blood and lies, but also continues to grossly violate all imaginable and inconceivable human rights. Europe is silent. States are silent. There is nothing to say.

Ctrl Enter
Noticed oshЫbku Highlight text and press. Ctrl + Enter
We are
Reports from the militia of New Russia for 27-28 September 2014 of the yearIn Kosovo, with the connivance of KFOR, Christian shrines are destroyed
Military Reviewin Yandex News
Military Reviewin Google News
44 comments
Information
Dear reader, to leave comments on the publication, you must sign in.