February 16 2018
158
In the State Duma will consider a bill that the publication of Nazi symbols not for propaganda purposes can not be considered as a reason for criminal or administrative prosecution. Such a bill appeared after the incident in the Arkhangelsk region, where a local resident was fined by the Isakogorsky District Court, who published a photo of the Victory Parade 1945 of the year on his page on the social network. In the well-known photograph, the Soviet victorious warriors are preparing to throw banners and standards of defeated Nazi formations to the Mausoleum.


A little more than a month ago, a resident of Arkhangelsk, Mikhail Listov, was fined under the article 20.3 of the CAO "Propaganda or public demonstration of Nazi paraphernalia". The court found that the photo from the 1945 Victory Parade of the Year is exactly this kind of propaganda.

Local blogs passed information about the fact that M. Listov was fined allegedly for being active during A.Navalny’s protests. However, in the end it turned out that the fine was imposed precisely for publishing photos from the parade in Moscow. 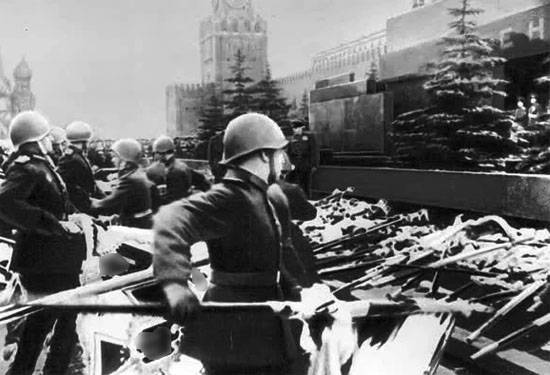 The Arkhangelsk court after a resonance in the media and social networks overturned the decision of the Isakogorsky district court on alleged propaganda of Nazi symbols. ” Mikhail Listov himself commented on the final decision to the portal «29.ru».
I am very pleased with this decision, 90% of people were for me. There were, of course, all sorts of scumbags, but people have common sense. Many supported me, thanks everyone. If there was no such resonance, we could not win.

The very fact that the courts at the moment, in fact, can attract any Russian for what he will publish on social networks, for example, historical the photo with the defeated Wehrmacht soldiers (since Nazi symbols are on their uniforms) already looks, to put it mildly, strange. It turns out that even the TV channels that put on the air the film “Seventeen Moments of Spring”, the courts are currently ready to fine for “demonstrating Nazi symbols” by the letter of the law.
Ctrl Enter
Noticed oshЫbku Highlight text and press. Ctrl + Enter
We are
Military Reviewin Yandex News
Military Reviewin Google News
158 comments
Information
Dear reader, to leave comments on the publication, you must sign in.