Last year, Ukraine worked in the "minus"

February 16 2018
32
During the week, the State Statistics Service of Ukraine reported that last year there was a negative balance of foreign trade. Ukrainian imports exceeded exports by $ 2,6 billion. Unlike the current depressing result in 2016, the Ukrainian State Statistics Service reported a trade surplus of $ 0,54 billion. It is noteworthy that for commodity items, imports now exceeded exports by $ 6,33 billion (deficit growth by 2,2 compared with 2016 year). The sad picture was somewhat brightened up by the increased export of Ukrainian services, but he was unable to pull the country's foreign trade balance out of minus. 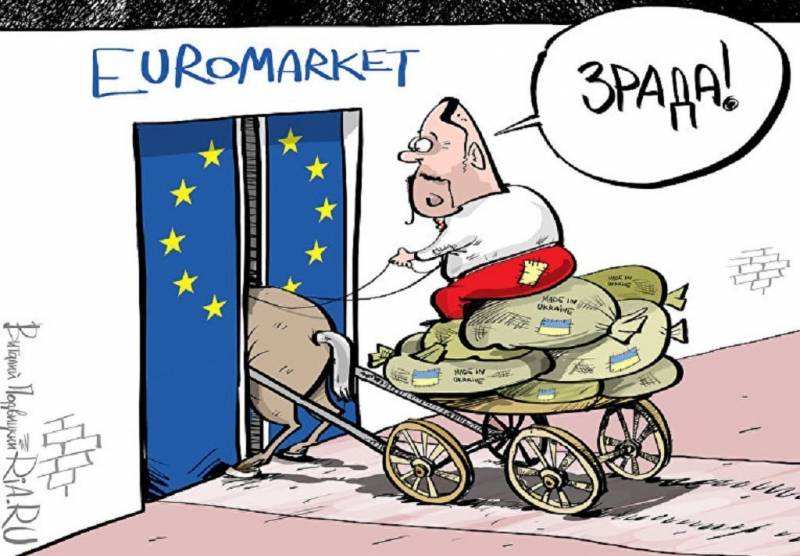 Having counted and shed tears, Ukrainian experts recalled the recent report by the European Union on the implementation of free trade agreements. It dealt with all EU partners (these are 30 states of the world, including those located far beyond Europe), but in Kiev they paid attention to the numbers relating to their country.

They clearly showed that the Agreement on a deep and comprehensive free trade zone between Ukraine and the European Union brought Europeans nine times more benefits than Ukrainians from 1, which entered into force on January 2016 of January.

During the term of the agreement, exports of goods and services from Europe to Ukraine grew by 17,6%. In turn, Ukrainian supplies to the EU grew only by 1,9%. The authors of the report explained such a modest result of Ukrainian foreign trade operations by the fact that the economy in Ukraine had just begun its recovery.

Experts in Kiev noted another reason for the imbalance in trade with Europe. If Ukraine has practically opened its market for the EU, then in response it has put serious obstacles in the form of various quotas for agricultural products (today the main resource of Ukrainian exports).

As a rule, these quotas end within six months or even the first quarter. Then trade begins with the accrual of duties, which makes Ukrainian products non-competitive. This has already been written a lot. However, Brussels does not stop at quotas and is looking for new ways to protect its market.

This January, for example, residents of Ukrainian villages suddenly found out for themselves that from the new year, at the request of EU officials, the country switched to European quality standards for dairy products. These standards allow for the implementation, as a food commodity, milk of only three types: extra-class, higher and first classes.

Milk, which is supplied to the processing plants of the Ukrainian villagers, refers to the second grade. This is the lowest quality raw material. Practically all over the world it is prohibited to produce dairy products from it. It is taken only to make animal feed.

Meanwhile, second-rate milk in the Ukrainian market is almost 75%. Due to its sales, the economy of rural farmsteads is kept. The introduction of the ban threatens the collapse of an entire industry. Low-grade milk attracts processors with its purchase price. It is 30-40% lower compared to the cost of products supplied by large farms.

However, the claims to the quality of rural milk are very serious. Experts note that “Most villagers do not follow basic hygiene rules. Milking cows with dirty hands, milk is poured into the dishes, standing right in the middle of the yard. It often gets flies or wasps. In addition, such milk is often diluted with water and antibiotics are added so that it does not spoil longer. ”

This was talked about and written a long time ago, but the state did nothing to change the situation. There is no money to help private homes in the treasury. The only thing that the authorities in Kiev decided under the pressure of mass protests of villagers - the introduction of new quality standards was postponed until July 1.

It is unlikely that during this time something will change. In the summer, “big milk” will go on pastures, and the problem will be aggravated even more than in shock January. The case of the Ukrainian agrarians showed that the European Union is not at all interested in the internal problems of Ukraine. To meet high European standards, she must solve them herself.

Against the background of a failure in foreign trade in Ukraine, voices about losses from the loss of the Russian market sounded shyly. At the end of last year, speaking at the Fitch Ratings conference, First Deputy Prime Minister and Economy Minister Stepan Kubiv estimated these losses at full-value 15 billions of dollars.

Kubiv accompanied his message with rhetoric familiar to Ukraine about the “annexation of the Crimea and the conflict in the Donbass”, but had to admit that breaking the bilateral ties cost his country the loss of 20 percent of the economy. This was accompanied by the acceleration of deindustrialization, the increase in the outflow of professional personnel, the loss of much of the scientific potential.

The association with the European Union did not in any way compensate for these losses. The fact is that for Europeans the main point of association with Ukraine lies in expanding the sales market for their products, and Ukrainian goods there are waiting mainly in the form of raw materials. The insistence of Brussels on Kiev to allow the export of logs for export became widely known.

Less is known about the situation with sunflower seeds. For a long time, Ukraine exported them in significant volumes. Then she raised export duties on sunflower. It became profitable to process on the spot. As a result, Ukraine has become one of the largest producers and exporters of sunflower oil.

The European Union ordered Kiev to cancel export duties on oilseeds and ensure the free export of sunflower. So began the reverse process. Now sunflower seeds are being transported to Europe. There they are processed and returned back to the ready-made vegetable oil. Ukrainians are losing not only the surcharge for deep processing of raw materials, but also lose their legitimate jobs.

Similar schemes just create the same trade imbalance, which is now fixed Ukrainian statistics. After all, it is known that raw materials cost much less than finished products and even semi-finished products. And here - continuous "minus". For example, in post-years, exports of chemical products fell by half.

Kiev oracles from propaganda explain this by saying that Ukraine had previously bought raw materials for chemistry in the CIS countries (which is true). Then he made mineral fertilizers from it and exported them. Now this scheme has stopped working due to mutual sanctions with Russia. Hence the failure in foreign trade.

Less is said that the indicators for the export of pig iron and ferroalloys, pulp and paper industry and mechanical engineering went “to negative”. On the other hand, exports of iron ore increased by 12%, which only confirms the fact: Europeans see Ukraine mainly as a raw materials appendage of their economy.

As such, it is difficult to count on favorable results in foreign trade. Experts predict that the sad result recorded by the state statistics is only the beginning of a protracted recession, which in the future will bring even more depressing imbalances in trade relations between Ukraine and the EU.

It is difficult to say who Kiev officials will now blame for the failures of the country. One thing is clear: the answer to this must be sought in the 486 text of the articles of the association agreement with the EU, which either did not read carefully before signing, or deliberately placed the country in unfavorable external conditions, agreeing to unfavorable trade regulations. Now live with it ...