February 14 2018
205
In the reflection of the recent Israeli raids on targets in Syria, not only the C-200 and Buk missiles, but also the Pantsir-S anti-aircraft missile-gun systems (ZRPK), reported News. 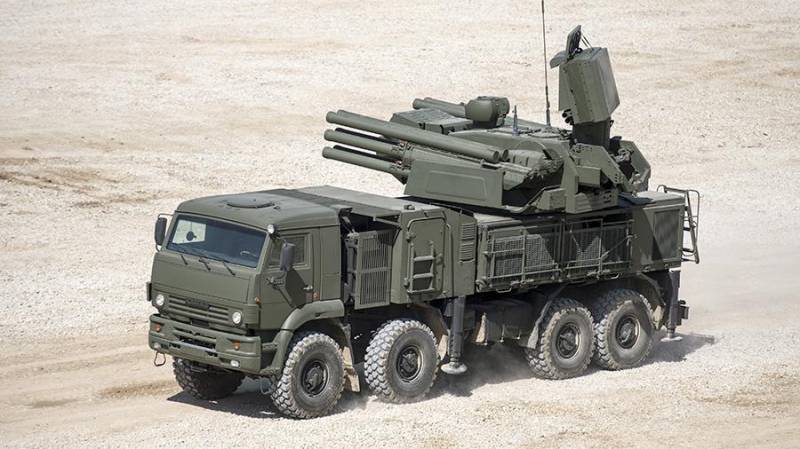 According to the newspaper, referring to the Syrian Defense Ministry, "February 10 air defense forces of the country had to repel a massive strike using air-launched cruise missiles, while the main targets of the Syrian anti-aircraft gunners were not airplanes, but air-to-ground missiles launched outside the country's airspace." ".

As a result of the first raid, eight of the 11 Israeli missiles found were destroyed, and the second attack out of seven rockets resulted in five. The only aircraft entering the airspace of the country was shot down by our anti-aircraft missile system,
told the publication a Syrian officer.

The interlocutor, however, refused to clarify how exactly the air defense system struck the F-16I Sufa fighter that had fallen on Israeli territory, but noted that during the raid "all Syrian calculations acted independently."

According to him, this could not have been achieved "without the assistance provided earlier by the Russian specialists who restored the technical readiness of the C-125, C-200 and Buk complexes, as well as retrained the Syrian military."

The February 10 incident was not the first in the last few days. This was reported to Izvestia by a source in the Syrian General Staff. The information was confirmed by the interlocutor in the Russian military department.

On February 7, the Israeli Air Force aircraft, violating the Syrian state border, launched eight air-to-surface missiles at the building of the National Science Center in the city of Salamia in the province of Hama. Then the Pantsir-S, C-200 and Buk complexes destroyed six missiles. The remaining two fell in the area of ​​the National Science Center, without causing significant damage,
told a military source.

As representatives of the Israeli Defense Ministry said earlier, “the situation worsened after around four o'clock in the morning on Saturday (February 10) an Iranian drone was found flying in from Jordan.” The reconnaissance UAV was intercepted by an Apache helicopter. The Israeli air force launched an air raid to destroy the drone control station. She was in the depth of the territory of the SAR near the city of Palmyra.

Israel used cruise missiles to strike. These are very difficult targets flying at low altitudes. To intercept them, not only prepared calculations are required, but also centralization, as well as a high level of management. From 26 targets, 19 was intercepted. It turns out that the Syrian defense demonstrated effectiveness close to 0,8. And this is a very high figure
Lieutenant-General Alexander Gorkov, former commander of the Russian anti-aircraft missile forces, told the newspaper.

In total, the Syrian air defense forces are armed with 8 C-200 air defense missile systems, which were supplied from the USSR, and around the Buk 20 complexes of various modifications. The last large batch of eight “Bukov” versions of the M2E was transferred to Damascus in 2011. In addition, in the 2013-2015 years, Russia supplied Damascus more than three dozen Pantsir ZRPK, including the last modification “C”.

Ctrl Enter
Noticed oshЫbku Highlight text and press. Ctrl + Enter
We are
Moscow and Minsk will multiply the former strength of the air defense of fraternal Serbia: C-300, "Baikals" and "MiGs" for BelgradeUpdated "Torah" and "Buki": anti-missile masters of survivability for military air defense
Military Reviewin Yandex News
Military Reviewin Google News
205 comments
Information
Dear reader, to leave comments on the publication, you must sign in.