Minsk will host the next round of negotiations on the Donbass

February 14 2018
38
The next meeting of the contact group on the settlement of the conflict in the east of Ukraine and its working groups will be held today in Minsk, transfers RIA News. 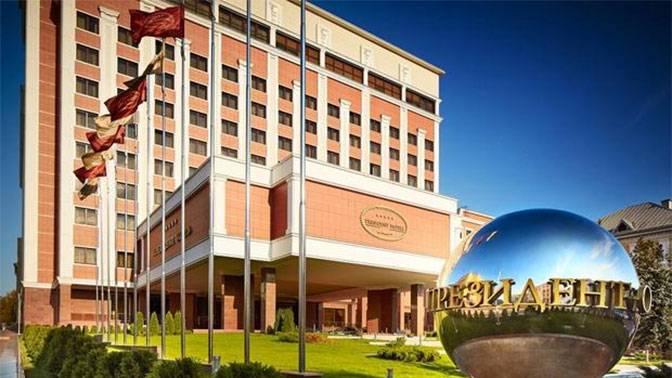 "Minsk is preparing for the Wednesday meeting of the contact group on the settlement of the conflict in the east of Ukraine", - said the Foreign Ministry of Belarus.

Recall that at the end of January, the parties to the conflict reaffirmed their commitment to the declared truce, stressing “the need for issuance and observance of relevant orders, including the need for disciplinary measures for violating the cease-fire.” However, ceasefire violations continue to continue.

In Minsk actively discussing dilution of forces and means, the purpose of which is to increase the distance between the positions of the parties in conflict ... DNI fulfills its obligations. Thus, the corresponding orders were given to departments and published, promotion is not carried forward, proceedings for violations are held regularly,
Representative of the Donetsk Republic Denis Pushilin told reporters.

At the same time, the Secretary of the National Security and Defense Council of Ukraine, Oleksandr Turchynov, said that over the past two years, the Ukrainian security forces "in some areas have advanced 10 kilometers and more beyond the boundary line in the Donbas".

At a meeting of the contact group we will be forced to raise the question of systematic violations of the Ukrainian armed forces of the Minsk agreements and ceasefire. About violations about which one of Ukrainian TV channels so proudly told yesterday officially official - Secretary of the NSDC,
said Russia's plenipotentiary at the talks, Boris Gryzlov.

According to him, Turchinov, in fact, recognized as a fact what the representatives of the Russian Federation repeatedly talked about during the 2016 and 2017 years.

Namely - about the constant attempts of the Ukrainian Armed Forces and other Ukrainian formations to move beyond the demarcation line in the Donbass, about their constant violations of the cease-fire regimes, about seizing the so-called "gray zones" along the line, about other armed provocations, which they then tried to write off the responsibility of the opposing the side
added Gryzlov.

In this connection, Russia intends to "ask for the safety subgroup coordinator of the contact group Mr. Apakan to assess these statements."

We also intend to request the reflection of the actions of the Ukrainian subdivisions, noted by the Secretary of the National Security and Defense Council, in the reports of the OSCE SMM, in particular, moving in some directions to 10 kilometers from the line of demarcation,
said the plenipotentiary of the Russian Federation.

The Acting Foreign Minister of the DPR, Natalya Nikonorova, noted that the fulfillment of all points of the Minsk agreements is hampered by the unresolved political issues that are the basis for resolving the situation in the Donbas.

After all, political points should be the basis for a comprehensive and long-term settlement of the situation in the Donbas,
she said.

According to her, instead of direct dialogue with the DPR and the LPR, Kiev “is trying to circumvent the resulting impasse through an arbitrary interpretation of the Minsk Agreements and legislative initiative.”

Thus, Ukraine demonstrates its disinterest in restoring peace in the Donbass, without taking any concrete steps, but only creating the appearance of activities to implement the Set of measures. Kiev’s reluctance to resolve the conflict in the Donbas by diplomatic means increases the risk of a resumption of hostilities,
concluded Nikonorova.

Ctrl Enter
Noticed oshЫbku Highlight text and press. Ctrl + Enter
We are
Donetsk insists on the publication by Kiev of orders for "school truce"Reports from the militia of New Russia for 20-21 September 2014 of the year
Military Reviewin Yandex News
Military Reviewin Google News
38 comments
Information
Dear reader, to leave comments on the publication, you must sign in.