The myth of the "wretched" Tsarevich Alexei 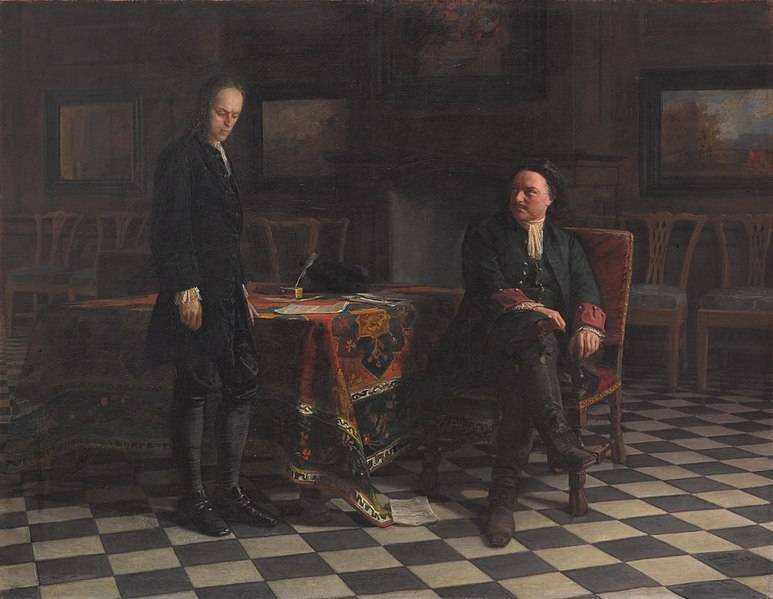 300 years ago, 14 February 1718, Tsar Peter I deprived his son Alexei of the rights of the heir to the throne. 5 July 1718, the supreme court, consisting of generals, senators and the Holy Synod, sentenced the prince to death. Two days later, the prince died, apparently due to torture.


Later, the myth was created about the miserable, cowardly, and silly prince who was tried to take advantage of external and internal enemies of Peter's reforms and the creation of the great Russian power. And his disgrace, condemnation and murder were shown as fair and justified actions necessary for the modernization of Peter the Great of Russia, which made her a great European power.

For example, in the article by critic V. Stasov, this is the image of a prince: “The picture of Mr. Ge (“ Peter I interrogates Tsarevich Alexei in Peterhof. ”N.N. Ge, 1871) presents a scene from the life of Peter: he interrogates in Peterhof, in the small palace of his Monplaisir, his son, Tsarevich Alexei, turned from his escape to Austria and Naples. The terrible tsar, already beginning to turn gray, sits by the table on which are letters incriminating the prince in his intrigues and treasonous intercourse. Before him stands his son, falsely or sincerely repenting, - a long and skinny, real figure of a dull, narrow-headed deacon ... what drama is here being performed! Similarly, the two extreme opposites of people came together from different parts of the world. One is the energy itself, uncompromising and mighty will, a handsome giant in a Transfiguration caftan and high military boots — all excited and turned his wonderful, burning head to this son, this unreasonable, this enemy, who has taken it into his head to become on the road. Anger, reproach, contempt - everything here burns in his eyes, and under this look the colorless head of a young criminal, who does not dare to look directly at the terrible judge, fell and fell. He is insignificant, he is despicable, he is disgusting in his pallor and Old Believer cowardice. " Thus, the character and appearance of the prince - a stupid coward, miserable and insignificant, and is treated to the present time.

The fact that Peter the Great was great historical personality, no one doubts. But the question is why he pursued his son and eventually allowed him to be killed. Perhaps he himself took part in this terrible crime. After all, the "contemptible" Alexei did not have the opportunity to confront him. He was declared a miserable insignificance! But Peter, instigated by Catherine (Marta Skavronskaya) and Menshikov, continued to pursue him, forced him to flee Russia with his restrictions, then returned him with a promise to have mercy, but did not fulfill it. As a result, one of the worst pages in the history of the Romanov dynasty happened. The father persecuted his son to death.

Since Tsarevich Alexei is a man devoted to the old order and poor, he could simply be removed from the road without killing. Alexey refused the throne, even swore voluntarily to the new heir to his stepbrother (son of Catherine I). It seemed that everything was simple, you can drive him into exile, into a monastery, or put him in a hole. But Peter and his inner circle were afraid of something. What - the “prince-idiot”? Why kill Alexis? After all, physically eliminate only strong and smart competitors.

However, everything becomes clear if you get acquainted with the personality of Tsarevich Alexei. A. Pushkin, who was not only a great poet, but also an excellent historian, reads: "The prince was adored by the people (Peter, however, was hated by most of the people, considered “the antichrist.” - Author.), Who saw him as a future restorer of antiquity. The entire opposition (even the Prince. Yakov Dolgoruky himself) was on his side. The clergy, persecuted by the Protestant king, put all their hopes on him. Peter hated his son as an obstacle to the present and the future destroyer of his creation. ”

The prince was not physically and mentally "miserable." His teacher, Güissen, in a report to the sovereign, noted that Aleksey "is intelligent far above his age." The prince made a favorable impression on others. The English envoy to Russia Vitvort, in a letter sent from Moscow 28 February 1705, noted: "... I had the honor to greet the son and heir to the Tsar, Alexei Petrovich, a tall, handsome prince of sixteen, who speaks Dutch perfectly ...". Tsarevich Alexei knew Latin, Dutch, French and German. He was a great lover of books and reading. In addition to theology, he seriously studied history, philology, bought books on military science, mathematics. Had a large library at that time. Tsarevich supplemented his education abroad, improving his knowledge in the field of foreign languages, studied geometry, fortification and other sciences. I also studied various sights abroad; I bought books in large numbers, both religious and secular.

Thus, the Russian prince was one of the most educated people of that time in Russia. Obviously, someone had to expose Alexei Petrovich as a kind of idiot, whom one should not regret. Later, the Russian emperor Pavel Petrovich, who challenged the British lion, was blackened by the same method.

Alexey Petrovich was born on 18 (28) in February of 1690, in Transfiguration. In the first years he lived in the care of his grandmother Natalia Kirillovna and mother Evdokia Fyodorovna, nee Lopukhina. His first teacher was Nikifor Vyazma, a weak and worthless man.

The first crack between father and son was the attitude to Evdokia. Peter and Evdokia loved each other at first. But Peter quickly became addicted to military and maritime affairs, and very early on became acquainted with the rampant life and all its pleasures, in the circle of young (most often) merry comrades. Among them were many foreigners, often adventurers who want to earn and make a career in Russia. Obviously, among them were the "agents of influence" of the West. Peter was constantly on the move, in Pereslavl, Voronezh, Arkhangelsk, near Azov. With brief meetings, the queen, who hated everything foreign, could not restore the mood in their relationship.

The decision to divorce Evdokia was taken during the journey of Peter abroad. From abroad, the young king ordered his people to persuade the queen to get a haircut as a nun. The queen strongly opposed. Returning to Russia 1698 year, Peter broke her resistance. Evdokia was sent to the Suzdal Pokrovsky Monastery. There she was shorn. For what? No information. If Evdokia was to blame, this was reported in the famous condemnation of 1718. It was written there only by the hand of the king himself, that she was removed "for some of her oppositions and suspicions." The act of the king was very immoral and cruel - he imprisoned a young woman in a monastery, after several years of marriage, the mother of two sons, without guilt, to please her whims or political considerations. At the same time, the king and his buddies led a very dissolute way of life, contrary to the patriarchal Russian mores. And foreigners were laying under it girls, like Anna Mons's sweetheart.

“With all respect,” writes the historian M. M. Shcherbatov, “which I have for my greatness in monarchs and great in people in my heart I retain, with all my feeling that the state’s greatest benefit required him to have, in addition to Tsarevich Alexei Petrovich children, the successors of his throne, I can’t help myself not to cheat on his divorce from his first spouse, born Lopukhina, and his second marriage, after his first wife, to prisoner Catherine Alexeyevna ... Let the monarch have strong reasons for that, which however Well I do not see kro ie its inclination to Monsovym resistance of his wife was newly installed. "

Apparently, the main reason for the rupture of a marriage and the tonsure of a queen as a nun is dislike for everything foreign. Alexander Gordon, in her “History of Peter,” writes that she had alienated her spouse from herself by “unconnected jealousy and reproaches for his attachment to foreigners.” The ancient genus Lopukhins hated foreigners who curled around the king. It came to a fight one of the brothers Evdokii Lefort. And Lefort was the famous seducer of the king - the organizer of his feasts and merriments, for which he was beaten by the brother of the queen, who stood up for her part and the honor of the clan. "Germans" fiercely hated Patriarch Joachim. This firm and principled man pleaded with Peter not to believe the “damned heretics”, not to entrust them with command of the troops (the failure of the first period of the Northern War was entirely on foreign command). He urged Peter not to give foreigners and non-believers positions in the state, saw in this the destruction of Russia. This hatred took over the courtyard of the mother and wife of Peter.

Thus, Peter, who had fallen under the influence of foreigners, Russian “European nobles,” who had easily accepted all foreign, and who had embarked on the westernization of Russia, had torn off “with antiquity” in the most abrupt manner. The wife, who harbored hostility towards foreigners, was an obstacle, she was eliminated. And Peter was soon shoved by the "cook" Martha, indifferent to "Russianness."

Ctrl Enter
Noticed oshЫbku Highlight text and press. Ctrl + Enter
We are
Time to change the heir. Qatari crisis as a cover for the struggle for powerList of CIA-funded Russian public organizations
Military Reviewin Yandex News
Military Reviewin Google News
98 comments
Information
Dear reader, to leave comments on the publication, you must sign in.