"Swamp people": all ends - in the water!

February 21 2018
36
And before, and now the swamps were considered deadly, scary, mysterious. A lot of creepy stories was connected with the swamp swamps. They were afraid to walk on them, because they considered them the abode of all evil spirits. This is what the dark people used, who hid the traces of their crimes in the swamps. 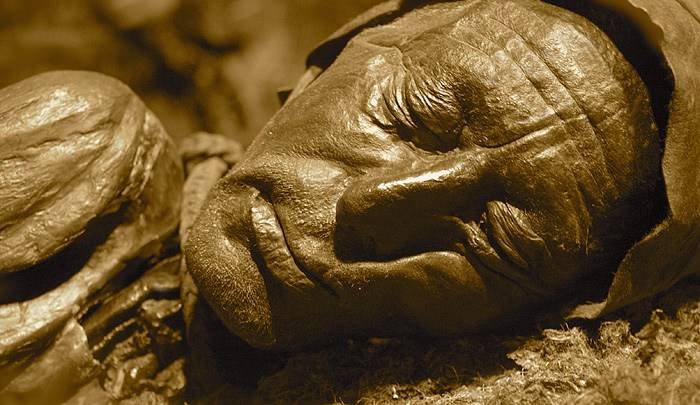 Almost everyone has ever heard of the mummies of ancient Egypt. We received initial information about them during our school years, later information about them could be found in magazines and newspapers of that time. But before, and now, in addition to the ancient Egyptian mummies, the world was surprised by other finds. These are the so-called “swamp people”. Of course, this is not the inhabitants of the swamps and swamps. These are human remains - the findings of scientists. The victims in the peat bogs were massively found in the XIX – first half of the XX century. Mummified bodies were dug up in swamps across northern Europe. Surprisingly, the finds are perfectly preserved.

Mummy, mummy, and how old are you?

According to scientists, the total number of bodies found in the peatlands was more than a thousand. Contrary to the notions of many that the body in a swamp is likely to quickly become unusable, the peatlands have preservative properties and perfectly preserve the bodies trapped in them. Some finds had an excellent view. The bodies were mummified, but did not undergo the process of decomposition. As a rule, mummies were discovered by peat developers. But since the peat workers were illiterate people, these bodies were of no interest to them at all. That is why they acted with them as they please. Because of this, many mummies science simply lost, because the body during the extraction of peat were withdrawn carelessly, by fragments, which were immediately thrown away. Nobody reported the findings anywhere.

When more advanced research methods appeared, scientists were able, with the help of the radiocarbon method of research, to finally determine the age of the “drowned men”. And it turned out to be very solid: most of the finds fell into the swampy swamps of 2 - 2,5 thousands of years ago. And there are some very “long-livers”: on the Danish island of Fünen the skeletal body of a young woman was found. Age of discovery was 8000 years. And all thanks to the peat. After all, the swamp on 90 percent consists of peat acids, and they have excellent preservative, as well as tannic properties. Yes, plus more and cold water. Because of this combination of properties, the bodies that fell for a long time were left without oxygen, which means that decay did not destroy either the body, or hair, or clothing.

In the study of the remains, scientists sometimes had to play the role of criminologists. After all, it was necessary to find out the cause of death, why the crime was committed, and in addition, to collect “material evidence”, as well as everything that belonged to the drowned man. Certainly, an autopsy was carried out, and then, having gathered all the facts together, a “picture” of what happened, and, if possible, a lifestyle of a still alive person, was compiled.

For example, a study of the contents of the stomach and gastrointestinal tract helped scientists establish that they ate before death. For example, an ancient resident of the town of Tolllund, shortly before his death, quenched his hunger with porridge from a mixture of many seeds and grains. The quality and content of the diet can tell a lot and hair, which scientists took for analysis from mummies. For example, a person found under Klonikavan used to eat a lot of vegetables, and therefore he died, most likely, in the summer.

It is worth noting another very curious detail: all the bodies found have the same red hair and black skin. But after all, they were never blacks (we remember that most of the finds were from Northern Europe). And the reason for the special action of peat.

Special, preserving properties of peat contributed to the preservation of clothing. After lying in the peatlands for hundreds of years, part of the clothes still survived. On some bodies, fragments of clothing have been preserved by which one can understand what ancient people wore. For example, a famous person from Tolund was wearing a fur cap on the inside. Next to the dead woman from Huldermus they found a pair of leather hats, a hairband, and a wool skirt. And the man from Clonicavan was also a dandy: he was styling his hair with “gel” of resin and vegetable oil. A woman from Elling wore luxurious hair of almost a meter length, woven into a braid and laid in an intricate hairstyle.

Victim of crime or sacrifice?

So how was it really? Why did people get into the swamp? Scientists have several versions. The findings were usually made after an external examination. Those on whom there were no signs of violence were considered simply drowned. In other words, they were victims of an accident or a ridiculous accident. Another thing - people found with traces of violence, related, strangled or with a cut throat. There are two options: either it is the victim of the murderer, or it is the sacrifice, in other words, the ritual murder. In order to appease the terrible swamp gods, they sacrificed a man, after strangling him. Someone before death was tortured. The terrible findings testify to this: some bodies had holes in their hands, and walnut rods were knotted in them. In this way, traces of crimes and torture were hidden: the victims were simply thrown into the swamp. 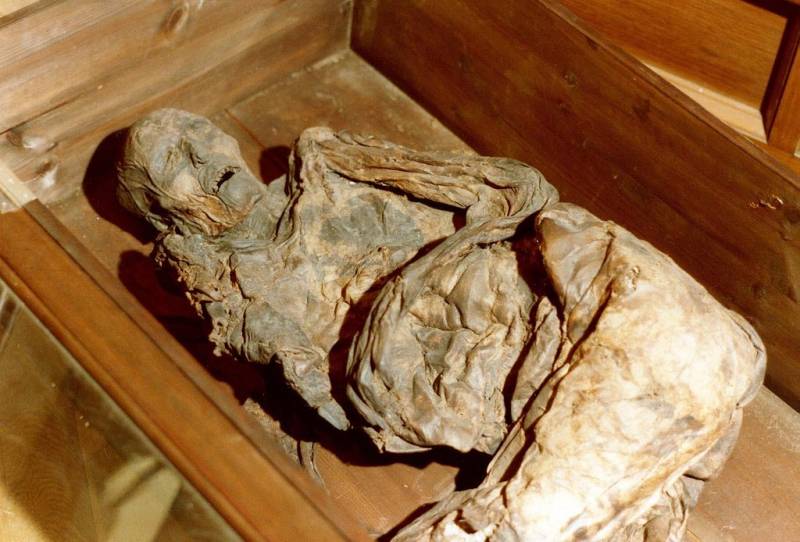 Well, now it makes sense to get acquainted with some of the "instances" closer. Let's give the right of superiority to women.

One of the finds - “Woman from the Huldre swamp” lived almost 2,5 thousands of years ago. She wore a warm woolen skirt at that time, found in the same place as the woman. Her last meal was rye bread. There was one oddity in the find - the limbs chopped in many places. 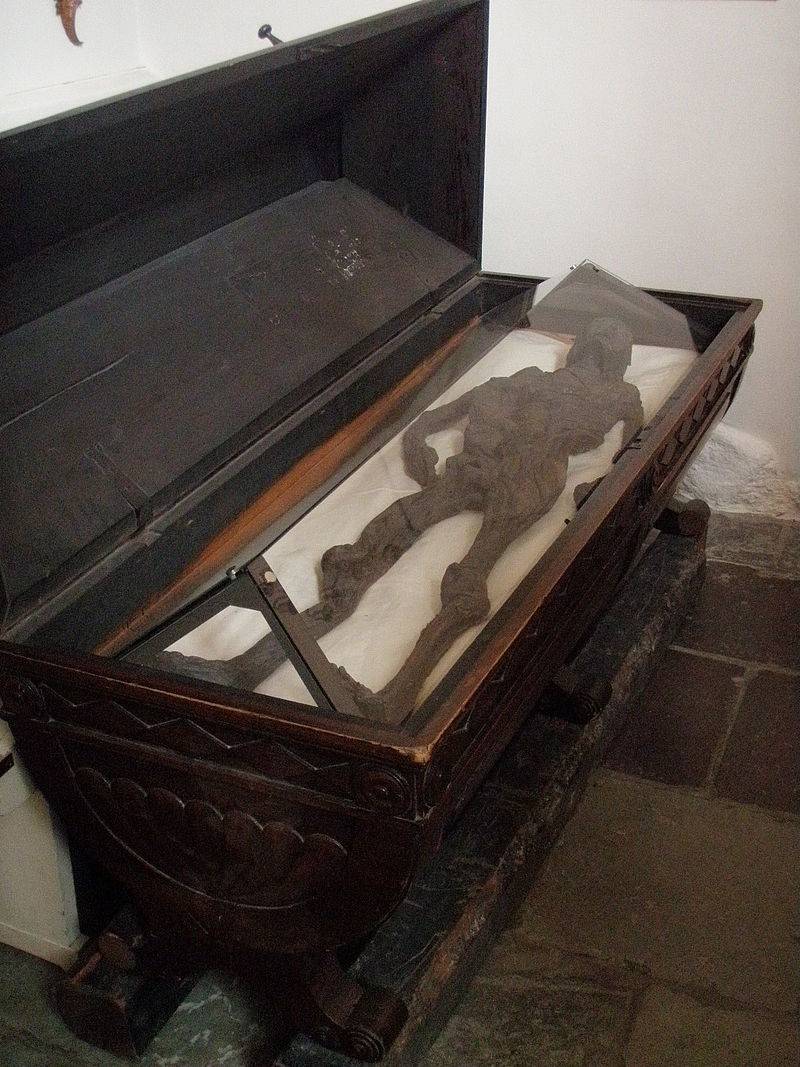 "Woman from Haraldsker", exhibited in a glazed sarcophagus in Vejle, Denmark.

The find was discovered in 1835 year in the marshland of Jutland. It is assumed that a woman died in the V century BC. The mummy was also perfectly preserved: both the skin and the insides were in very good condition. The height of the woman was small, only one and a half meters. Death came at the age of 50. Remarkably, the body was not affected by disease. Most likely, the woman was the victim of criminals: the presence of a rope trace on her neck is a bright proof of that. The mummy found its "shelter" in Denmark, in the city of Vejle, where the church of St. Nicholas. The body was placed in a glazed, beautifully decorated sarcophagus. 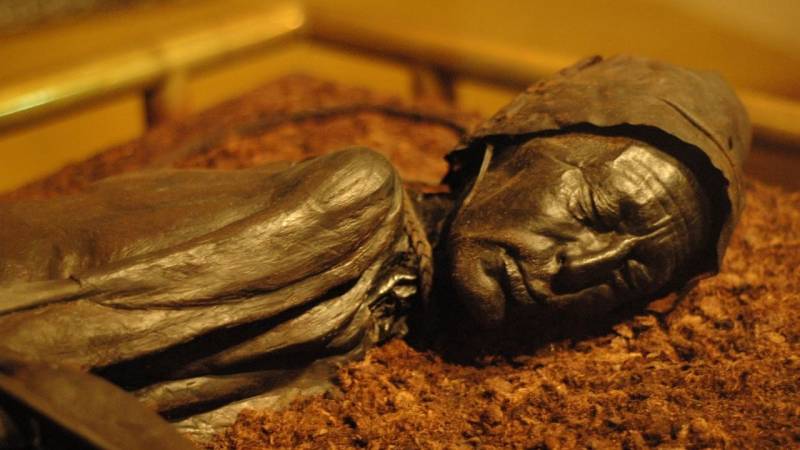 This man was found in the 6 peatlands of May 1950, the inhabitants of the Danish village of Tolllund. The detected body was removed from the peat and carefully examined. The height of the person was no more than 1 and 62. See. The expert, while inspecting, stated that the person was first strangled, and then he was thrown into the swamp. Thanks to the excellent preservation of the internal organs, scientists were able to determine the age of the deceased, which was approximately 40 years. Most likely, the deceased hit the swamp either in early spring or late autumn. The water at that time was already quite cold, the rest was completed by peat. The time in which he lived is the Iron Age. However, his position in society has remained a mystery, which, unfortunately, can not be solved. The find can be seen in Denmark, in the town of Silkeborg, where the local museum is located. 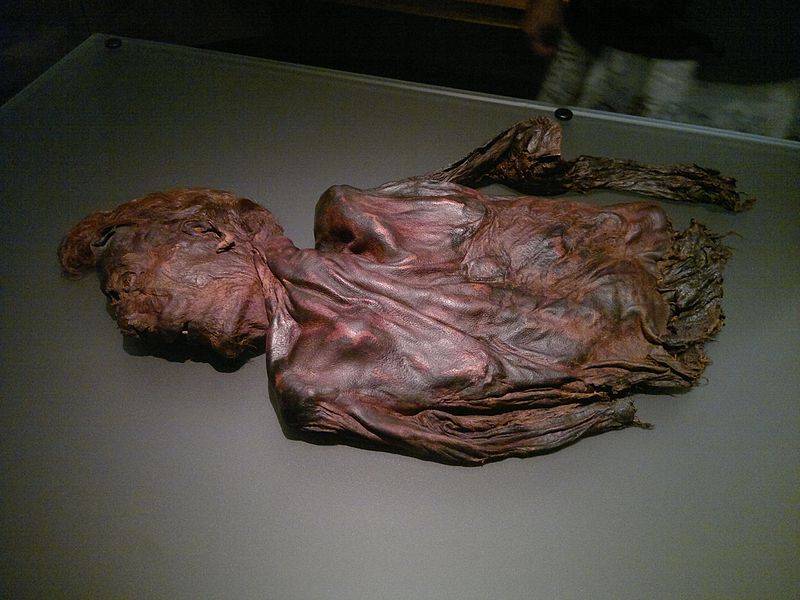 Another “instance” was discovered in 2003, in Britain, in the swamps of Clonikawan, located in the Irish county of Mead. The safety of the mummy was amazing, and this allowed the forensic experts to do it first. The medical examiners decided that this find was “by their part” and only by setting the age of the body (more than 2000 years), it was transferred to scientists. A distinctive feature of the mummy was an intricate hairstyle, laid using a special tool for hair. The composition of the funds included special components, which were not then in Ireland. From this it was concluded that already at that time active trade was conducted between Ireland and Southern Europe. By the way, among the scientists there were football fans (not only great pranksters), who in the guise of a mummy found some similarities with ... David Beckham, for which she was immediately named after him (I wonder how David himself treated this?) . 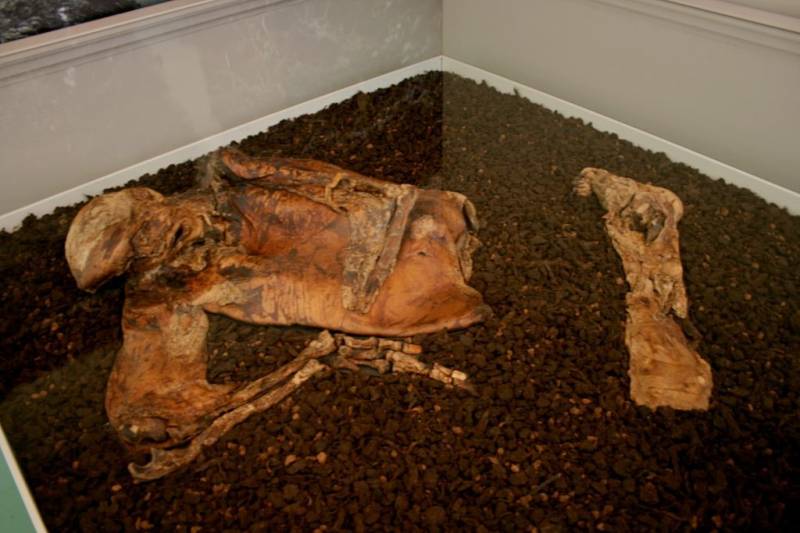 Another find that caused considerable interest among scientists was also found in England. He was nicknamed Pete Marsh ("peat bog"). Body found in 1984 year. Or rather, not the body, but at first only the head. It was the head of a woman. At first, it was also decided that this was the work of a criminal who was operating in our time and who had finished his victim either after a robbery or as an unnecessary witness. Policemen remembered the events 30-year-old. There was a dark one at that time. историяassociated with the murder of a woman. A local resident came under suspicion, who, after his arrest, confessed that in 50-ies he really killed his wife, dismembered his body and drowned him in a swamp. But then the matter took an unexpected turn. The police probably received praise from the authorities for solving the murder, but the find went to the scientists. They were “tormented by vague doubts” that the find was not so young. And the scientists were right. Radiocarbon analysis has shown that the age of the “young lady” head is more than 2000 years. Soon they found the “body of Pete Marsh”, who died, as it turned out more than a thousand years ago.

Scientists were able to determine the age of a person at the time of death - he was quite young, 25 years old. Its growth was 1 m 65 cm, and weight approximately 65 kg. They paid attention to themselves shortly trimmed mustache and beard. Death came from a blow to the head with a heavy object; in addition, his throat was cut. Now the mummy is in the fund of the British Museum in London. 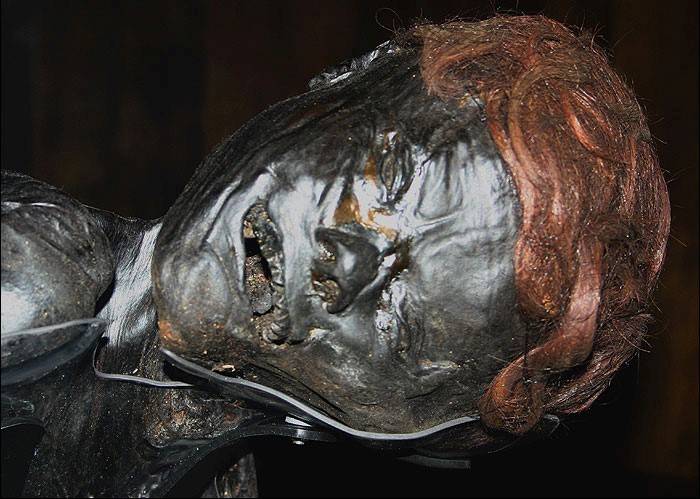 The body of this man was also perfectly preserved. It was discovered in April 1952 of the year in the same peatlands as the “Tollund man”. On this mummy both hair and nails are preserved. "Spoil the view" only mutilated neck. The unfortunate was cut the throat, for which - apparently, it will remain unknown.

According to the same radiocarbon method, this man also lived in the Iron Age and died at the age of thirty. Its growth was 1 and 75. The mummy is located in Denmark, in the museum of the city of Aarhus.