February 12 2018
26
The administration of D. Trump continues the policy of the B. Obama administration in the gas sector. The White House’s actions are directed against the Russian project Nord Stream 2. However, other foreign experts consider such a policy harmful to Washington. Opposition to the Russian project is not only a waste of time and effort, but also contrary to US national interests. 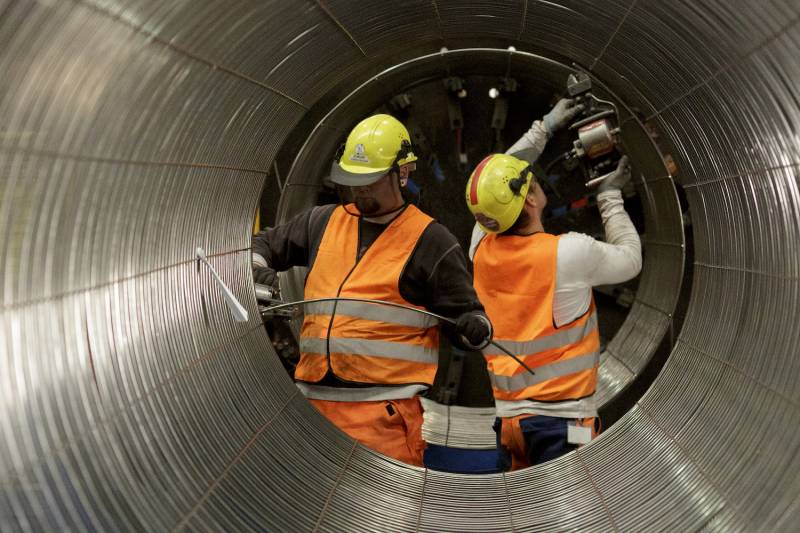 The administration of Donald Trump dissociated himself from the policies of his predecessors in the energy field, but one aspect was fully preserved: Washington’s vehement opposition to the Russian gas pipeline Nord Stream 2 (from Russia to Germany). This is what Brenda Scheffer writes in an influential subscription magazine. "Foreign Policy".

The other day, while in Warsaw, the US Secretary of State Rex Tillerson actually supported this position. According to him, the United States believes that the Russian pipeline "undermines the overall energy security and stability of Europe."

The new pipeline along with Nord Stream will be able to provide a quarter of the annual import of natural gas to Europe. And this Russian project, that is, the second “stream”, was therefore specifically identified in the US sanctions policy towards Russia, adopted by the Congress in August 2017 of the year.

Such a position has always created for the United States a "contradiction" in relations with Russia. According to some commentators, this may seem like a reason enough to approve a policy.

The American opposition to the second “stream”, that is, the Nord Stream 2 gas pipeline, is bipartisan: it is supported by both Republicans and Democrats. And at the same time, Brenda Schaeffer points out, this kind of strategy is wrong. Ultimately, when Washington puts sticks in the wheels of the Russian “stream”, it not only wastes time and energy, but also naturally harms ... American interests!

This conclusion confirms a number of facts. First, the United States should have thought before turning Europe into political battlefields: after all, Europe is an American ally. And if we object to the policy of European states, then only where Washington has in mind the really important vital interests and where he is able to win. But the “northern streams” are crucial for Berlin, and Washington’s decision to Berlin’s politicians “not to shake,” says Scheffer. In Germany, the pipeline itself and the expansion of direct gas supplies from Russia have “broad political support,” the author recalls. This is how it is: the United States cannot prevent the export of Russian gas to Europe.

Attempts energy sanctions were before. In 1981, the administration of Ronald Reagan imposed restrictions on American and European companies involved in building gas pipelines from the Soviet Union to France and West Germany. This led to friction between the US and Europe. In the end, Reagan refused sanctions. He refused when it became clear: Europe will do what it wants, despite the “American opposition”. The current US politicians would do well to read the declassified CIA report from 1982 of the year, where it is written in black and white in what way Europe views energy trade with the Russians. Since that year, nothing has really changed.

Secondly, continues B.Sheffer, Europe needs more and more gas. Its sources may be different, but Russia is also among the suppliers. Indeed, over the past 2, gas imports to Europe have increased significantly. And if economic growth in Europe continues, gas imports will increase, despite an increase in the share of renewable energy sources. It is also necessary to take into account the closure of nuclear power plants in Germany (the latter will be closed in 2022). Additional gas supplies to Europe will also contribute to the reorientation of the country from coal to natural gas, since the latter has less impact on the environment, including climate change.

As a result, the security of Europe and its energy supply are directly related to the supply of Russian gas. Europe can not reduce them. Russian gas (alas, for the USA) cannot be replaced (at least in large part) by the export of liquefied natural gas. Many countries in Europe, which are more dependent on Russian gas imports, are landlocked and cannot access LNG terminals. Moreover, even the states that have built facilities for importing LNG (for example, Lithuania) are ready to further import gas from Russia: the price gap between natural pipeline gas and LNG is large.

Third, Washington’s attempts to pressure Russia undermine European energy security because they create relative instability. The Russian state-owned concern Gazprom has a clear commercial goal: to avoid instability wherever possible. Ukraine is a sad example here. Today, about half of gas supplies to Europe go through Ukraine. And over the past two decades, gas supplies to Europe have been interrupted several times due to conflicts between Moscow and Kiev. One of the most common causes of conflict: Kiev does not pay for gas. And the expansion of the Nord Stream gas pipeline would really mean greater gas stability for Germany: it would simply replace the transit through Ukraine with these routes.

Russia, the author further recalls, provides about 35% of German gas needs. Germany is the largest gas export market for Russia (22% share). In addition, German-Russian trade and cooperation are important for stability in Europe. In fact, they serve as the cornerstone for establishing closer relations between East and West. Therefore, Washington should coordinate with Berlin, and not break relations.

In order to hinder the Nord Stream 2 project, other politicians in Brussels, supported by Washington, are considering the issue of EU energy trading rules: they say, let these rules apply not only in Europe, but also on imported pipelines located outside Europe. Ultimately, such a position would damage the security of Europe and would siege gas suppliers who seek to export their goods to the European market. In addition, EU gas trade laws have been developed for trade and consumer relations, and not for gas production and transit projects. Moreover, the introduction of new EU gas trade laws for imported pipelines before gas arrives in the EU could improve Russia's position in various projects related to the supply of gas of non-Russian origin. EU laws would allow third-party access to these pipelines, which would open the door for Russia to join these projects.

In fact, we note that the Americans have already lost this gas war. First, Washington under Trump ruined relations with the EU, and especially with Germany. Secondly, the “Nord Stream 2” starts this year. This was announced by the executive director of the company "Nord Stream 2 AG" Matthias Warnig in an interview with the newspaper "Welt". According to him, the company expects to receive permits and proceed to the construction of the Nord Stream 2 in 2018.

“My work,” quotes him. Kommersant, - is to provide a start in the 2018 year. We have technically and virtually completed all the tasks and are going to mobilize the contract partners. ”

The businessman said that permits for the construction of the pipeline were received from Germany and Sweden. There remains Finland, and then "will have to see what decision Denmark will take."

As for the United States, then, according to Warnig, in Washington “they hardly understand the European energy market and European pricing, but all attention is focused on the threat from Russia”.

For the Russian “Gazprom”, the new “stream” is economically beneficial not only because of the bypass of the unstable factor of Ukraine. The positive effect of the transfer of gas volumes from the Ukrainian route to the Nord Stream 2 gas pipeline for Gazprom will express totaling over 1 billion dollars a year. In essence, Gazprom will start paying the transport tariff to itself. An additional economic plus will appear due to the greater efficiency of the new pipeline system: a shorter distance, higher pressure in the pipes.

And another blow to Trump - indirect. More precisely, it is a blow to the European LNG market. It will soon be inflicted by the same Germans together with the Russians.

On evaluation the German consulting company Energy Research & Scenarios, when launching Nord Stream 2, the EU will need less LNG, which is now being purchased from Norway and North Africa. As a result, LNG prices will fall.

Observed and commented on Oleg Chuvakin
- especially for topwar.ru
Ctrl Enter
Noticed oshЫbku Highlight text and press. Ctrl + Enter
We are
Overseas ally? Donald Trump - US Presidential CandidateSituational analysis of the death of the MH17 flight (Malaysian Boeing 777), made on the basis of engineering analysis from 15.08.2014
Military Reviewin Yandex News
Military Reviewin Google News
26 comments
Information
Dear reader, to leave comments on the publication, you must sign in.