The mystery of the tragedy in Uglich will remain unsolved?

April 20 2012
4
The tragedy in Uglich and today causes heated debates among historians. There are several versions of developments in this obscure period in the life of the Russian state.


The last son of Ivan Vasilyevich was born from the seventh marriage, the unholy to the church, with Maria Naga and was considered illegitimate. During the period of serious illness of the king, some of the boyars openly refused to swear to the infant, which made Grozny even more suspicious and tougher. After the death of the sovereign, he had two sons: a weak-tempered Fyodor and little Dmitri. Fedor turned out to be a man of control, which his close relative from his wife, Boris Godunov, quickly took advantage of. The reign of Fyodor, in fact, was the beginning of the reign of Godunov, a far-sighted and prudent politician. After the proclamation of Fyodor as king and the convening of the board of trustees, the queen was sent to Uglich together with the innocent youth. The tsarina herself considered settlement in the only independent inheritance in the state by reference and frankly hated Godunov. Frequent talk about Boris, filled with anger, influenced the boy, forming a fierce hatred of this man. Suddenly, the prince died - the day of the boy's death can be safely called the beginning of the Great Troubles. 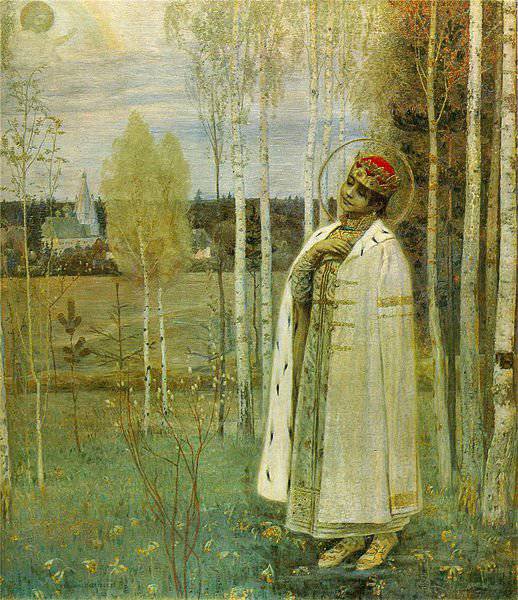 The first among the official interpretations of the causes of the death of the last son of Ivan the Terrible and Maria Nagoy - Tsarevich Dmitry is considered an accident. 15 May 1591, after the mass, the boy was occupied with playing “knives” with his peers in the courtyard of the princely house. Occupation, by the way, very strange for a child with epilepsy. The children were supervised by the eldest nurse Volokhova Vasilisa. Suddenly, the prince had an epileptic seizure, and he inflicted a mortal wound. The fact of the accident was established by a specially created commission organized by Godunov, headed by Prince Shuisky. It should be noted that Shuisky was an unofficial opponent of Godunov, therefore he most likely had no intention of finding reasons justifying the acting mentor of the weak-willed Fyodor. Nevertheless, the commission considered that the cause of death was “the court of God,” and not the evil intent of the conspirators, as Nagy claimed. However, in the course of the investigation, all but Mikhail Nagy recognized the accidental tragedy. According to investigators, it was established that in a fit the prince cut his throat, and it was impossible to save him.

On the one hand, the interpretation is plausible, but there are some strange, if not to say contradictory, points in it. According to the testimony of Volokhova and other eyewitnesses to the death, the boy fell on a knife, squeezed in his hand, and, having injured his throat, fought for a long time in a fit. First of all, it is doubtful that the prince remained alive while the throat was damaged and there was significant blood loss, and the attack continued. This fact can still find a medical explanation. Doctors say that when a vein or artery was damaged under the influence of convulsions, portions of air could enter the bloodstream and the prince died from the so-called heart air embolism. The wound, apparently, did not cause much blood loss, so the nurse did not see in her mortal danger. Such a statement looks incredible, but doctors insist that such a situation could well have occurred. Further doubts among historians are the behavior of the queen. The mother, instead of trying to help or simply mourn her son, pounces on the mother and beats her with a log. Then, in the city, someone beats the alarm and begins a massacre, during which the Naked deal with all the persons they dislike, one way or another connected with Boris. Perhaps the queen's behavior was dictated by psychological shock, but the subsequent reprisals against the representatives of Godunov present in Uglich can not be justified only by mental trauma. This behavior is more reminiscent of intentional and prepared actions. By the way, the subsequent actions of Maria Nagaya in relation to the first Impostor are also obscure.

Investigating the incident did not know the prince in the face, because they saw him for the last time almost in infancy. Apart from the tsarina and her relatives, no one could reliably identify the corpse of a child. As a result, another version of the miraculously rescued prince arose, which spread to the political arena of False Dmitry I. There is an opinion that Nude, fearing an attempt on the life of a child by Godunov, staged his death, replacing Dmitry with a priest. It is unlikely that anyone will doubt that the attempt would have happened sooner or later. Given the trick and mind of Godunov, it would certainly succeed. Probably, this fact was well recognized by Naga, so the version of the substitution of the child seems to be very plausible. Taking advantage of the opportunity, they carried the lightly wounded Tsarevich deep into the princely home, and all those who knew Dmitri well were killed. After the relatives had time and the opportunity to bring the prince to a secluded place and hide him somewhere in the wilderness. Subsequently, the arguments were added to this version that the first of the impostors really looked like a prince, had the same marks, good posture and manners. In addition, the adventurer had some papers, as well as jewels from the royal treasury.

Gregory Otrepiev, allegedly, was one of the supporters of False Dmitry, but not himself. About this person also preserved some data. So, by order of Godunov, an investigation was organized with the first information about the impostor. However, certificates and documents had many inaccuracies and errors, and therefore today are subject to great doubts. Despite all its persuasiveness, this point of view has a significant drawback. As you know, Lzhedmitry I was a healthy and resilient man, while Tsarevich Dmitry suffered from a severe form of epilepsy that threatened his life every minute. Even if one assumes the incredible fact of his recovery that in the sixteenth century was simply impossible, one cannot deny the presence of inconsistencies in the characters. The consequences of epilepsy disease, or its presence is always reflected on the psyche and is manifested in specific signs.

People suffering from this disease are suspicious, suspicious, and vindictive, while the False Dmitry is described by an open and charming person, without a shadow of these features. According to numerous testimonies, the impostor simply fascinated Muscovites, for which he was immediately accused of witchcraft after his death. If we assume that the False Dmitry I was still the son of Ivan the Terrible, then most likely he was one of his illegitimate offspring, but not the murdered prince.

Another popular version of the death of Dmitry is the assertion that the tragedy was nothing more than a secret order from Godunov to eliminate the claimant to the throne. Karamzin also supports this assumption, although, according to the stories of his friends and colleagues, the point of view described in the works does not coincide with the personal opinion of the historian. The well-known monarchist did not dare to dethrone the official interpretation, since, in his own words, the settled view is holy. However, in this view, which later became almost the main one, there are significant drawbacks. On the one hand, the prince’s death was beneficial to Fyodor’s guardian, as his claims to the throne became apparent. The prince clearly showed hostility towards Godunov, and his accession to the throne promised cruel repression. There is information that among the boy’s fun were very perverted. For example, he demanded to sculpt snowy figures, gave them the names of noble boyars and Godunov himself, and then he chopped and quartered dolls. The cruelty of the child manifested itself in almost everything. He loved to watch the slaughter of livestock, and also personally turned the heads of chickens in the princely kitchen. In a fit of rage, the prince once half-killed the daughter of one of the closest people. Dmitri was to become a very harsh sovereign, no less inferior, and perhaps even superior in his cruelty to the royal father. Ironically, the people of Dmitriy received the status of good.

So, the fate of Dmitry, it seemed, was sealed. However, the method of eliminating the opponent was chosen completely uncharacteristic for Boris. This cunning and very intelligent figure preferred to destroy people he disliked without unnecessary noise, using more often poisons and other means. An open murder with such a large number of conspirators who did not even try to hide from the retaliation of indignant relatives does not fit in with the Jesuit methods of fighting Godunov. The behavior of Shuisky is also surprising. He did not even try to blame his opponent for the death of the prince, and only after a long time made a statement about his atrocities.

Among the main theories concerning the death of little Dmitry, the most plausible seems to be the first. Unfortunately, it is already impossible to find out exactly what happened in Uglich 15 in May 1591. We can only build different assumptions and try to back them up with arguments that seem to us the most convincing, but one cannot insist on the truth of any one version.

Ctrl Enter
Noticed oshЫbku Highlight text and press. Ctrl + Enter
We are
Sons of ivanThe protege of the Zaporozhian Cossacks on the Moscow throne
Military Reviewin Yandex News
Military Reviewin Google News
4 comments
Information
Dear reader, to leave comments on the publication, you must sign in.