Finland does not exclude the possibility of joining NATO

February 2 2018
50
Inauguration of the President of Finland Sauli Niinistö was held in Helsinki. His victory in the first round of voting and the high personal rating indicate that there should be no fundamental changes in the state’s foreign policy, writes Kommersant. 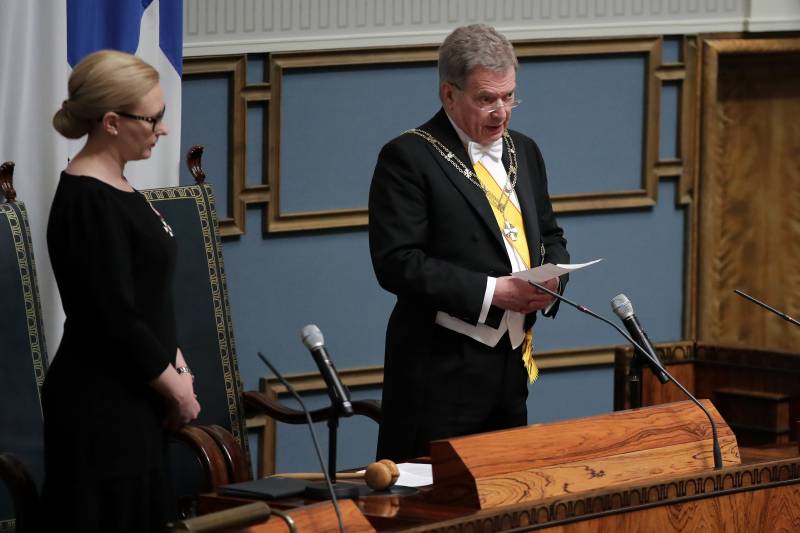 Sauli Niinistö, has been the head of state since 2012 of the year. After the election, he made it clear that he saw in such support of his fellow citizens a signal of wanting to keep everything as it is.

You should not strive for change for the sake of change,
explained the president.

Meanwhile, the future leadership relationship with NATO remains at the center of attention of the Finnish press.

Issues of foreign and security policy, as well as the prospects for joining NATO, played a significant role in the public debate before the elections,
Antero Mukka, editor-in-chief of the Finnish newspaper Helsingin Sanomat, told Russian journalists.

He recalled that more than 60% of Finns invariably state in polls that they are against joining the alliance.

Finland is an EU member, and most EU countries are members of NATO. We cooperate with them when we implement security and defense policies within the EU. But I do not want the arms race to begin in the north of Europe. And if Finland applied for joining NATO, Russia would take it negatively,
said, in turn, the second most popular participant in the presidential race, 2018, Green representative Pekka Haavisto.

At the same time, the former ambassador of Finland to Russia Hannu Himanen noted that the further development of this situation largely depends on the parliamentary elections in Sweden.

We have close bilateral defense cooperation with Sweden, and both countries work closely with NATO. In many ways, the development of events will depend on the outcome of the parliamentary elections in Sweden this fall. It is possible that the leader of the Conservatives will come to power, who has repeatedly declared that he sees Sweden as a member of NATO in the next ten years. But during the election campaign in Finland, the candidates were not ready to discuss how Helsinki would react in the event of such a development. Although Finnish politicians insist that our position does not depend on Swedish decisions, this is a difficult question,
Himanen told the newspaper.

He added that the Finns are "traditionally careful in their comments on foreign policy, but NATO membership remains an opportunity that Finland could use."

Tuomas Forsberg, a professor at the University of Tampere, agreed with him:

Candidates did not want to voice the thesis that Sweden could predetermine the line of Finland in this matter. But the position of Stockholm can really be decisive. Moreover, if Sweden decides to join NATO, it will be a challenge to the Finnish identity: the Finns always perceived themselves as residents of a northern country rather than a Baltic one, and all other Scandinavian countries would thus find themselves in NATO.

According to him, President Niinistö wants to "help improve relations between Russia and the EU," but intends to retain the option of joining NATO "as a political tool - and in the event of both a negative and a positive scenario of developing relations with Moscow."

The pessimistic scenario, according to the president, is if Moscow stops distinguishing between the EU and NATO and begins to perceive the European Union as an enemy. And optimistic is if we could return to the political climate of the early 2000's, when Russia and NATO developed cooperation and saw each other as friends, not enemies,
explained the professor.