February 2 2018
16
I constantly keep in touch with my colleagues from Syria, and that's what they told me. February 1 work in the building of the Syrian news agency SANA was in full swing - the staff were in complete “parking”, preparing materials about the Congress of National Unity held in Sochi. Suddenly, a woman rang the phone. She picked up the phone and in a few seconds screamed in horror. It turned out that she was told heavy news. In her house, located in the Mezze-86 Damascus Quarter, a mortar shell hit, her sister died.


After some time, information about the shelling of the “Syrian opposition” in two residential districts of Damascus - Ish Al-Vurud and Mezze-86 - appeared on the tapes of Syrian and Russian news agencies. Moreover, in the quarter Ish Al-Vurud of the dead - nine people, the injured - 15. As for the Western news agencies, they broadcast about the next “sufferings of the poor fighters against the regime” and the topic of Syrian chemical weapons is being sucked again.

So, from the de-escalation zone - the capital suburbs of Dzhobar, Duma and Kharasta - the civilians are again fired with mortars in violation of all agreements. But lately, it would seem, the residents of Damascus have felt some respite, a pause compared to what happened in previous years of the conflict. At least, incidents of this magnitude in Damascus have not been for quite some time.

Probably This shelling was a response to the recent National Dialogue Congress held in Sochi. Western media talk about the failure of the event. The US State Department issued a statement that the Congress "was not balanced," that "the opposition was not adequately represented." 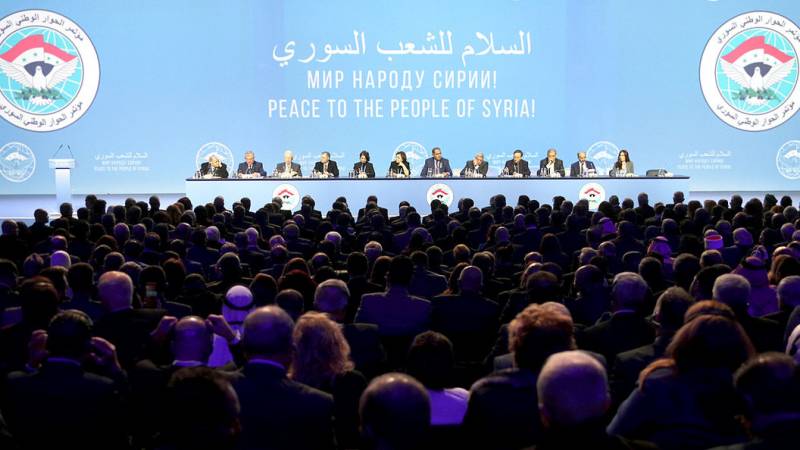 This was told at a briefing by the chief of the State Department press service, Heather Nauert. She also said that Russia does not use its "unique influence on the Syrian government to prevent chemical and other attacks against the population."

It is interesting to know what the United States did, having at least a “unique influence” on anti-Syrian armed forces in order to prevent the atrocities committed by February 1, which killed at least 10 people?

On the eve, there was almost another tragedy - fortunately, she was miraculously avoided. And it was about the Syrian delegation, which was returning from the talks in Sochi. So, they rode, taking with them the wishes of peace, and got into the war. Of course, the war has been going on for a long time, but they hardly thought they would cater to the shelling right at the airport of their homeland?

So, on January 31, two mortar shells exploded between two planes in which participants of the last Congress were. Fortunately, none of them was hurt. However, two airport employees were injured.

This incident clearly confirms that the enemies of Syria very much disliked the Congress of National Dialogue, held in Sochi. And somehow suspiciously this position coincides with the position of the US State Department!

The part of the “oppositionists”, which, it would seem, accepted the invitation to the Congress, at the last moment refused to participate in it. The pretext was the Syrian state flag. Not a flag with a portrait of Bashar Al-Assad, not the flag of Hezbollah, but the flag under which Syria has been living for decades. According to these "oppositionists" who arrived from Turkey, the event needed another flag - the one under which Syria lived, being a colony of France. It is under this symbol that the so-called “moderate opposition” comes out from the very beginning of the conflict - and most of those who started then moved under another flag — the flag (banned in the Russian Federation) of the terrorist organization ISIL, as well as (banned in the Russian Federation) “Dzhebhat An-Nusra. Such, if I may say so, the "guests" staged something like a sit-in strike in Adler - with a demonstration of their flag. The Russian authorities have not imposed any punishment on them.

Some of the irreconcilables did get to the negotiating table, but even there they tried to make a scandal. In the course of a speech by Russian Foreign Minister Sergey Lavrov, someone started shouting that Russia is an “occupier”. Much of the Syrians present did not like it. In response, they began to chant: “Thank you, Russia!” - so that even Lavrov himself asked for him to finish his speech.

All this suggests that different people really came to the Congress. That it was not at all some kind of staging event. Everyone had the right to have their say, even if this word is “occupant”. Even if someone decided to demonstratively sit at the airport - please!

The Syrian armed “opposition” does not allow such freedom of opinion. Judging by the shelling of Damascus airport at the time when the planes landed there with members of the delegation, the conversation there is short. I went to Congress - deserved death. You live in the "wrong" quarter of Damascus - you can be angry with the fact that the Congress did take place.

The main outcome of the National Dialogue Congress itself was the creation of a commission to draft a new constitution for Syria. Respect for the rights of women, all ethnic and religious groups, the future state system of the country were also discussed. The final document adopted at the end of the event stressed the need to respect the sovereignty of Syria and its territorial integrity.

Among those who supported the efforts of Russia is such a big power as China. The official representative of the Ministry of Foreign Affairs of the PRC said:

The Syrian National Dialogue Congress is an integral part of the peaceful resolution of the crisis situation in Syria, a beneficial addition to the negotiations in Geneva ... China sends its congratulations to the participants of this event in Sochi, which was marked by positive results. ”
On behalf of the UN, the Special Representative for Syria, Staffan de Mistura, praised the outcome of the negotiations:

“This was certainly a very stressful event. 1,6 is thousands of Syrians, many of whom were given the first opportunity to express their opinions. ”
And only the US State Department together with its closest allies did not support the Congress. Yes, the so-called “moderate opposition” controlled by him, having carried out shelling and shedding Syrian blood, showed her true face and her true attitude to peaceful negotiations.

Ctrl Enter
Noticed oshЫbku Highlight text and press. Ctrl + Enter
We are
Reports from the militia of New Russia for 27-28 September 2014 of the yearResults of the week. "Well, do not change me because of every idiot!"
16 comments
Information
Dear reader, to leave comments on the publication, you must to register.