February 1 2018
104
The incident that occurred on January 30 in the radio studio "Komsomolskaya Pravda", perhaps, inspired the patriotic public. Still would! Live received one of the most odious liberals Nikolai Svanidze. The one that for many years poured dirt on the leaders of the Soviet Union, and indeed in the Soviet period stories our country.


His opponent Maxim Shevchenko in this clash looked like a complete winner. First, he did not start a fight. Even before direct personal insults, it was Svanidze who fell. Secondly, Shevchenko was able to give a very worthy rebuff to a man who, from curses, turned to a fight. Thirdly, judging by the reaction of social networks and polls conducted on sites, the majority supported the position of Shevchenko. For example, on the website “Rambler-news»More than 60% voted in support of the latter. Of course, one cannot judge public opinion only on the Internet. But one should also take into account that the older generation is covered by the global network to a lesser extent than the youth, and it is even less “liberal”. 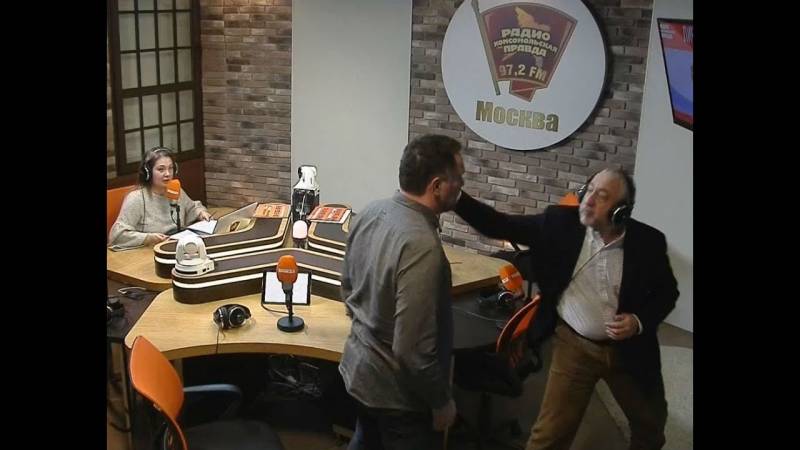 Indeed, the position of the defender of the graves of Soviet soldiers looks among the common people far more worthy than spitting up the leaders of the Great Victory, and through them the whole Victory as a whole.

This is what Maxim Shevchenko said after the incident:

“I never dismiss the first hand. There was a verbal discussion. I told him: “Kolya, you spit on the graves of Soviet soldiers.” He told me: “You scum. If you were closer, I would give you in the face. ”... He went towards me, I got up, put my hands behind my back. He hit me, after that I, on instinct, answered him. He flew into the corner. ”

However, Svanidze found his supporters. One of them is the “secular lioness” known under the pseudonym of Bozhena Rynska. Although she also described her like-minded person with a juicy, unflattering word "soplezhuy" (for losing in a fight). Hardly the solidarity of this scandalous celebrity will help Svanidze to become the leader of public opinion. Most likely, only hurt.

Svanidze categorically disagreed with the fact that he spat on the graves of the fallen - he had a father who fought with him. At the same time, his attempt to lay the blame for the beginning of the war on the Soviet Union - this is, in fact, the spitting of those who fought for this country. Every time the questions arise: what for then did they fight, for what state? And from here to justify Hitler’s aggression is one step.

Veterans of the Great Patriotic War, who preserved memories of her; children of war, many of whom have become orphans; the then juvenile prisoners of Nazi concentration camps ... Everything in their memory is too vivid. The great victory over fascism is one of the main victories of our Motherland for the entire time of its existence. So any attempts to revise its history are met by society very painfully.

And rightly so! Perhaps it was precisely the attitude towards that war and the Victory that did not allow 90's to finally defeat Yeltsinism’s ideology. When they were slandered by Zoya Kosmodemyanskaya, when the young guards martyred the deceased when they claimed that the Sailors simply slipped on the ice, when even the pioneers and heroes of some liberal hacks were drenched in mud — the people reacted angrily. Nevertheless, part of the liberal propaganda turned out to be very effective, many people managed to moan, many to whom and what the attitude of society was changed - but not to the 1941-1945 years! Maybe because too many more living witnesses ...

Every year, as soon as 9 May approaches, almost all TV channels show old, Soviet war films - because they are watched, because they are loved, because they are really popular. On the other hand, during the years of “democracy”, quite a few films were created, the authors of which try to curse the role of the USSR, its Supreme Commander, and marshals during the war years. In general, viewers “vote with their feet” - they simply do not watch such film films. Finally, at least one of these films, crafts put a barrier to power. Liberals, of course, are talking about censorship.

Dmitry Peskov, a spokesman for the Russian president, said about the fight:

“... In this context, I will tell you only one thing: and you criticize our ministry of culture for not issuing a rental certificate for the film about Stalin’s funeral” ...

This topic, he added, is too hot that “even such mastodons” cannot control themselves when discussing it.

Truly, even if experienced journalists, accustomed to verbal battles, could not restrain what to say about what kind of split questionable films bring to society!

Another veteran journalist, Vladimir Solovyov, is trying to blame the Komsomolskaya Pravda radio station host for the fight that took place: they did not lower the degree of aggression and did not separate it in time. However, firstly, even physically she could not separate them (for that is, the guards, who responded fairly quickly), and secondly, the fist fight also broke out on the show of Solovyov himself. It happened on the Sunday Night program in June 2015 of the year. Then the pro-scandalous political analyst Vyacheslav Kovtun received from the anti-Maidan, ex-deputy of the Verkhovna Rada of Ukraine Vladimir Oleinik.

The same Kovtun after that became a “punching bag” several times. On the “Process” program of the Zvezda TV channel 26 of May 2016, the Ukrainian political analyst Yurii Kot was forced to hit Kovtun for a reply, which could be regarded as threatening. The theme of the program was educational programs in Russia and Ukraine. Yuri Kot said that his 17-year-old son lives in Kiev and his example shows that not all young people are lost, that the young guys from his son's entourage honor the memory of the heroes of World War II and do not accept nationalist ideology. In response, Kovtun said: they say, we ask what kind of son it is. Considering the situation in post-Maid Kiev, where since the time of the coup d'etat has been ruled by the right-wing nationalist groups, this statement really looked like a threat to a young man.

Another time, October 31 2016, Kovtun was not beaten in the telecast itself, but during the break, in the dressing room. It was the program "Time will tell" on Channel One. The fight did not get on the air. Later, presenter Artem Sheinin, who could not restrain himself, apologized to Kovtun. He explained that the fight broke out because of "paranoid delusions triumphant in Ukraine." As reported by the media, for each blow received, Kovtun received good material compensation - the work with a “punching bag” is highly paid.

Another sensational incident occurred on the TV channel Zvezda 22 November 2016 of the year. This time - with Polish journalist Tomas Maciejcuk. It was, again, about Ukraine - it was the three-year anniversary of the beginning of Euromaidan. Maceychuk spoke about the standard of living of Russians. Perhaps he was even right about something, but he gave it in an extremely offensive form - so that even a part of the truth (low standard of living) sank in the contempt of this Pole for the country in which he is and where he was given the right to speak. When presenter Roman Babayan responded to the statement “Russians live in r *** e”, Matseichuk ordered to leave the studio, he refused to do this until Ukrainian politician Igor Markov hit him. The program turned out to be ripped off, it never went on air. Only in the network was posted her record.

Ukraine and events after the so-called. Euromaidan is another painful, hot topic. One of the reasons is that the triumphant neo-Nazis desecrate the memory of the Great Victory won by the Soviet Union. Most of our fellow citizens are hurt by the news that another monument was demolished, that the Eternal Flame was poured with concrete, that a veteran was beaten, that a St. George ribbon was torn off a girl, etc. We again come to the conclusion - the memory of our shrine, the war and heroism of the Soviet soldiers cuts away from us this pseudo-democratic contagion called "Maidan". And the people not only do not sympathize, if someone “flies” in the face for blasphemous statements, but also approves.

But this raises another question. Is it possible to imagine that in the same Ukraine they will now allow anyone to seriously declare the unity of the Russian and Ukrainian peoples? Say a good word to Stalin? Call Bandera who he was - an accomplice of the Nazis? Questions rhetorical. We see concerts and performances being broken down just because they are in Russian or because the artists participating in them have visited Crimea. Or even under any similar pretexts.

So why on the air of the Russian media - whether it is Channel One, “Star”, “Komsomolskaya Pravda” - not only voices are heard in support of the obviously anti-Russian Maidan with a pronounced “brown” tint, but frankly the dirt flows to Russia The USSR, on the exploits of the Red Army during the Great Patriotic War? Or do the management of the TV channels have fears that without scandals, without massacre, without such offensive statements, people will not watch the program? And that means income from television advertising may decrease.

Is it really necessary to admit that among TV viewers there is a demand for scandals with massacres? Correct, reasoned discussion already, sort of like, boring to watch? Not enough drive, "HYIP"? And, actually, it's hard to lead a normal political discussion in such showswhere all opponents are allowed to speak at once. As a result, the most noticeable is the one who has a louder voice and who is looser. On the program reigns such a din, that some people are not even heard. Moreover, not to hear any completed thoughts - you need not to say it, but to shout out your cue before you have time to interrupt.

Once in one of the programs an hourglass stood in front of each speaker, like in chess players. A discussion participant could speak, interrupt, take the floor out of turn, but after his time was up, he no longer had the right to vote. Perhaps this would be true - equal time for everyone on the air? We also need certain rules, taboos, prohibitions: you can not pour dirt on Russia, on the feats of ancestors, on the role of the USSR during the Great Patriotic War. Otherwise, the culture of these political shows will remain at the level of “House-2” - with scandals, insults and even massacre. And with knowingly blasphemous statements, for which their author will receive, firstly, by face, and secondly, monetary reward.

Ctrl Enter
Noticed oshЫbku Highlight text and press. Ctrl + Enter
We are
Hand-to-hand fight "for historical truth" Svanidze and Shevchenko in the studio of the radio station "KP"Yuri Drozdov: Russia prepared the role of the sacrificial calf
104 comments
Information
Dear reader, to leave comments on the publication, you must to register.