January 31 2018
12
I don’t know if people in the UK have become accustomed to constant cries about the Russian threat, but we’re almost there. And the next loud cry from the islands is almost not surprising. But only on the value of the word "almost." 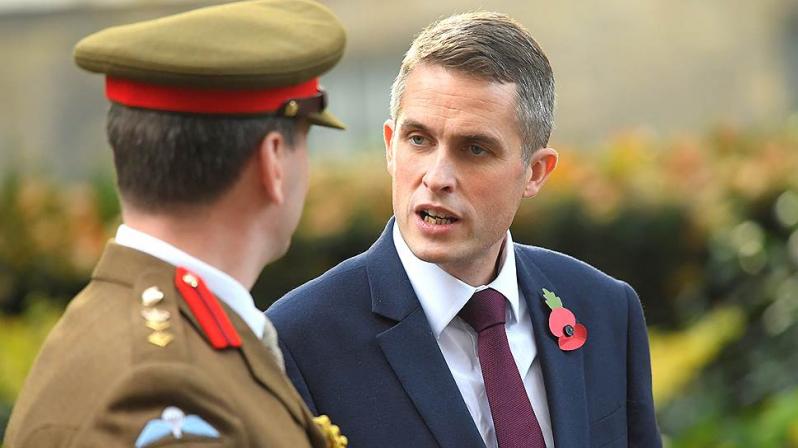 Because the last cry of the soul of the British Secretary of Defense Mr. Williamson is a masterpiece. Stunned, probably all. And Labor, and conservatives.

So, Russia is ready to kill the British with thousands, thousands and thousands ... So said Mr. Williamson. Well, the bird-troika of the British media rushed to sow sensible, kind and eternal. In a sense - to excel in fomenting panic, fear and discussing the methods by which the Russians will deal with the British.

You should not judge strictly, in general, Mr. Williamson did not invent anything. The song is as old as the world. Moreover, Mr. Carter, the Chief of the General Staff of Great Britain, noted in the press a week earlier. And also, “God save England from these Russians!”

Simple and unsophisticated. The British defense system is, if not defenseless, then fatally vulnerable to the Russian military threat. Therefore - need more money! Naturally, to strengthen the defense power of Britain. And, as a result, the prevention of reductions in both the size of the armed forces and allocations.

Nothing new, is it?

It is quite natural that the old and played vinyl is no longer impressive. Therefore, we need new tracks in the demanding program.

And here Williamson is just gorgeous. What Mr. Minister said (or repeated by someone written) is clearly from a new opera.

“The Russians plan is not to let their troops land in the South Bay near Scarborough and on Brighton Beach. They are now busy with what they think:“ How to hurt Britain the most? ”Damage its economy, destroy the infrastructure, which will lead to thousands, thousands and thousands of deaths, will create total chaos within the country. "

That's how it is, a very talented conservative. 41 year and already the minister. Recently, since November last year. But obviously, it will go very far.

The Russian embassy responded shortly, directly in British: "Some British politicians are not responsible for their words."

Translated from the diplomatic - twisted finger at the temple.

But even in Britain itself, not everyone is delighted with the speed of the minister.

For example, former European Parliament member Godfrey Bloom, demonstrates an understanding of the situation and a British sense of humor at the same time.

"Anti-Russian propaganda continues. How will it end? Hot war? It's funny how aggression comes from those who feel comfortable in their chairs."

Perhaps because Bloom is a retired major. And understands a little better than what it smells.

But then, Peter Oborn, who is very well-known in journalistic circles and, until recently, an employee of The Daily Telegraph, which published statements by British politicians, wrote:

"In this case, I am on the side of the Russian embassy. The Minister of Defense of Britain is a serious post. Gavin Williamson got out of control."

Some meticulous British journalists somewhat spoiled the impression of the program. They suggested that Williamson tried his shouts in the style of "Russian go!" to divert attention from the sexual scandal associated with it.

After all, it was on that very day, when everyone carefully studied and discussed Williamson's interview in The Daily Telegraph, that Mr. Minister himself justified in connection with his accusations of harassment to his subordinate in the distant 2004 year.

The United Kingdom today is not a country where you can just kiss a woman. This is not for you anywhere else. The forerunner of Williamson, Mr. Fallon, flew from the post of Minister of Defense precisely because he touched the knee of his subordinate.

So the song of Williamson can be very short. However, we will remember it.

But let's agree that it’s not only the sexual concern of former and present ministers, but also the readiness of the British media to support Russophobia. There is one The Daily Telegraph with the title "Russia is ready to kill us in thousands" which is worth. In addition, the newspaper provided the article with a detailed explanation of how Russia would implement its threats.

And The Times was noted in full. Bloody series on the plans of Russia to cut British submarine cables and undermine pipelines. With a very detailed description of the capabilities of Russian combat divers and sabotage mini-submarines.

It is rather naive today to believe that the awareness of the consequences of a global conflict will deter politicians of various levels from such statements. And all the more sad to hear it from the heads of ministries and departments of the military plan.

And their colleagues from the press for some reason prefer to work not in the cause of peace and detente, but in intensifying tension and developing paranoia among their own citizens.

Ctrl Enter
Noticed oshЫbku Highlight text and press. Ctrl + Enter
We are
Results of the week. "Who you are lucky, in fact, and will carry a cock, and such a bird as you, I, too, will rush!"Results of the week. "Either true or all is well"
12 comments
Information
Dear reader, to leave comments on the publication, you must to register.