In the probable fight of an elephant with a dragon, does a striped skunk win?

January 26 2018
35
During the week a series of materials appeared in the Indian press, in which the main geopolitical opponent of New Delhi is openly designated. And China is called the enemy. Named, despite the fact that these countries, by definition, should be considered by each other exclusively as reliable partners - at least on the basis of membership of both India and the PRC in BRICS. For the sake of justice, recently this abbreviation is becoming less and less manifest on the international arena, and remaining more a declarative union than a real one.


First, the Indian media touched upon the topic of strengthening China in Pakistan, which, as you know, in India is considered, to put it mildly, not the most friendly state. The assumptions are as follows: Chinese investors rebuilt the infrastructure of the Pakistani port of Gwadar (one of the three largest in the country) at their own expense. Thus, Beijing gained actual access to at least monitoring traffic in the Gulf of Oman, which passes into the notorious Strait of Hormuz with its geostrategic significance for the entire world economy. It is through the Strait of Hormuz that the bulk of the tanker traffic passes fleetserving oil exporters on the Arabian Peninsula. In India, it is believed that control of the Pakistani port of Gwadar by China allows Beijing to join forces against New Delhi and to deploy military infrastructure there under the guise.

In China, all these statements are called insolvent, adding that the development of the port of Gwadar in Pakistan lies at the heart of the maritime component of the One Belt - One Way Program, which is implemented by the PRC in a global version. 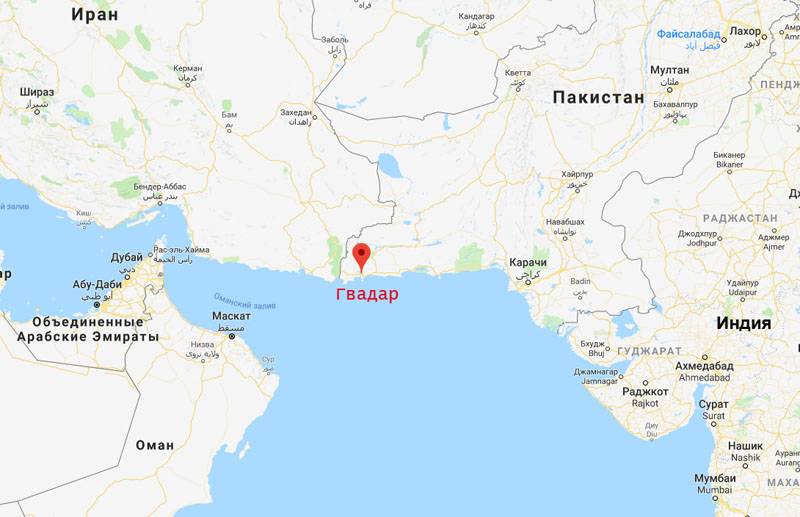 However, this explanation clearly does not reassure India. The authorities of the second largest country in the world believe that China’s statements only about the economic importance of Gwadar are a bluff. In this regard, so ... just in case ... Indian Navy Commander-in-Chief Admiral Sunil Lanba said that India in such a situation is forced to intensify the development of its fleet, and in the first place - underwater. Like, if China decided to settle in Pakistan purely economically, it means that Beijing will hardly be concerned about the strengthening of the underwater component of the Indian Navy — it is only protecting its borders.

India’s plans to build submarines are impressive enough: by 2030, it is planned to build and deliver 24 submarines to the country's Navy. At the first stage, they are planning to build six submarines of the Scorpene class, one of which is reportedly already built at the shipyard in Mumbai. At the same time, Admiral Lanba said that the construction of submarines in India involves the use of technologies of a number of "companies with relevant experience". We are talking about such "explosive mixture" as Naval Group, Saab, Rosoboronexport, and Thyssen Krupp Marine Systems. From this set, Indian shipyards are going to "take only the best" and begin to build two submarines a year - in order to "resist the Chinese gain."

And while Admiral Lanba was talking about how he would resist the Chinese suburbs under construction with a submarine fleet, comrades from friendly Vietnam arrived. Having caught the right moment, Hanoi called on New Delhi to become more involved in security integration in Southeast Asia. Vietnamese Prime Minister Nguyen Suan Fuk spoke with his Indian colleague Norendra Modi on the subject of what, they say, is a small archipelago, which China has practically taken hold of, and so many resources around this archipelago? - No, so much ... But you still need to "run" in this direction in order to integrate your efforts in counteracting the fire-breathing Chinese dragon.

From the message in the Indian press:
Under conditions of uncertainty regarding the security situation in the South China Sea, where there was no decline in Chinese construction activity in the disputed waters, India and Vietnam discussed issues of maritime cooperation and promised to expand their defense ties.

That is, India was frightened by the fact that China is literally chosen from all sides - in Gwadar, it is building a port that “smacks” not only for civilian purposes, but in the east is pressing out partners that could be useful to the Indian elephant in confrontation with the Chinese dragon.

Immediately, the indispensable "friends of India" from the United States were advancing. While in Davos, Switzerland, the heads of India and the United States, according to their protocol services, spoke on various topics. One of the main topics was devoted to China and its activity. It was said that China violates the trade regime in a number of areas and in general hinders American-Indian friendship.
Indian portal Indian Defense News writes (after Modi's contacts with Trump):
India and the United States can not allow China to hold them hostage in the implementation of military partnership. India and the United States are on the verge of a large political moment that can fundamentally change the strategic parameters in Asia.

It was noted that we are talking about the possibility of India receiving benefits for dual-use goods. In this case, it is added that India may soon enter the so-called category of the first level of the US export administration regime, when the country receives advantages in trade (including dual-use products), which are characteristic of exclusively the closest allies of the USA today.

From the material:
In real terms, Indian companies will not need licenses to trade in 90 percent of the items on export control lists. It is then that both countries will be able to create large ultramodern defense facilities that require the trade in large-scale dual-use goods.

Thus, the United States takes advantage of the Indian authorities' concerns about strengthening China and offers its services from the series: “But would you like to become my faithful ally?” From the US’s point of view, everything is wonderful: to bring India into its sphere of influence with its more than impressive growing economies and vast resources, and against this background try to play to weaken China.
Under the guise of Lockheed Martin, it pushes the creation of F-16 assembly facilities in India with the ultimate goal of “flipping” Indian friends with a party of F-35 fighter jets - as “fraternal help”. A sort of barter: we give you jobs, we give you a contract for 35.

At the same time, pumping in the southeast, the United States continues to bite China by deploying a missile defense system - “from the North Korean threat.” And because the fact remains a fact - the American striped skunk wins first of all from the opposition of the Indian elephant and the Chinese dragon ...

Ctrl Enter
Noticed oshЫbku Highlight text and press. Ctrl + Enter
We are
BRICS: friendship against the dollarBRICS: a blow to unipolarity
35 comments
Information
Dear reader, to leave comments on the publication, you must to register.