Fiends on the Black Sea: the little-known crimes of the Nazis in the area of ​​Novorossiysk. 1 part

January 30 2018
33
In the modern world, where the whitening of the Nazis has become a political trend, it is just the right way to publish evidence of their crimes. No matter how surprising it is, they often try to reduce the entire wealth of data on Nazi atrocities to the most egregious cases (the blockade of Leningrad, Salaspils, Auschwitz, etc.), which has recently been used against the victims of the Nazis themselves. You will rub out any Westerner, as instantly he will begin to mumble about the vicissitudes of war, isolated cases, or even fall into the gastric ecstasy of the modern professional consumer of everything and everyone and bark about the "Bavarian". That's why boys from Urengoy, inspired by liberal zhlobskaya psychology, mothballs of Vlasovites of various kinds, “independent” journalists with a characteristic hanging leash, etc., breed with us. etc. 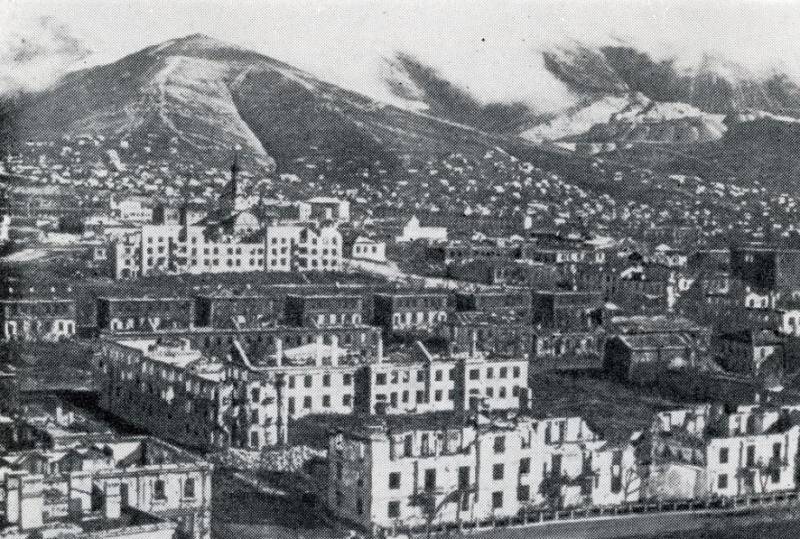 And it never occurred to them (more precisely, it is simply unprofitable for career and financial reasons) that the practice of permanent migrant concentration camps was used by European “civilizers” throughout the entire occupied part of the Soviet Union. Why are there a little thing, this practice is generally peculiar to Western “civilizers” throughout stories humanity to this day. For example, what is the difference between the White Helmets and the White Helmets that were promoted in the West as humanitarian pigeons, which were convicted more than once of forgery and even trafficking in human organs? Those Natsik only in Novorossiysk completely got away for the "White Helmets". In February, the 1943 of the year, before the bright Easter holiday, the invaders posted announcements that food (1kg of flour and 1 kg of fish) would be distributed to the local population, who were literally sweating from hunger. Some desperate and starving citizens believed this. A crowd gathered. At the same time, German operators and photographers appeared. As soon as the faithful chicks of Goebbels clicked off the shots they needed, few of the products already distributed were taken away from the people, and the crowd was dispersed with rifle fire. And after a few days all over the land (true in an enlightened Europe), they trumpeted in the occupation sheets and on the radio as the Nazis took care of the Russian population.

But these are just touches to the portrait. Thanks to the search engines from the Novorossiysk Search Center Dmitry Ninua and Nikolai Melnik, who provided the author with photocopies of rare archival materials, the reader will be able to learn more fully the history of the occupation and crimes of the Nazis in Novorossiysk and surrounding areas and villages. 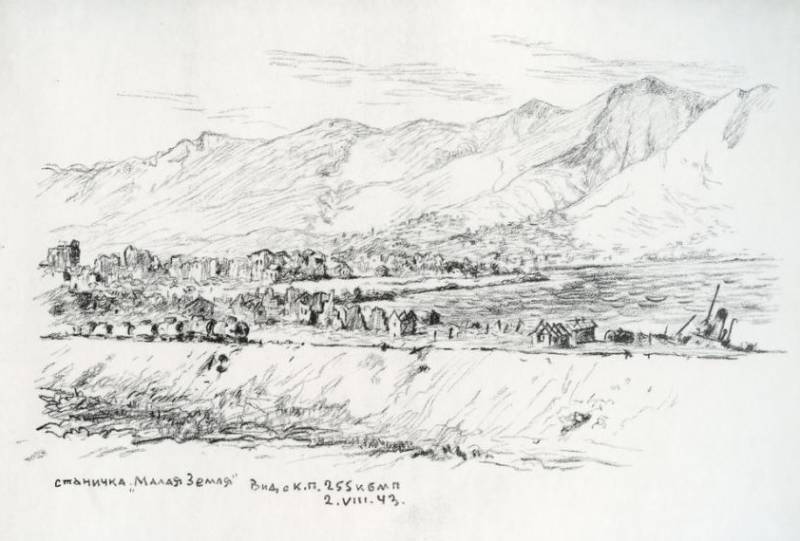 On the morning of September 16, 1943, Novorossiysk was completely liberated from the invaders. The grouping of Nazi troops quickly hastened to the side of Temryuk, fearing to be surrounded. The decision was quite logical, partly because of the memory they left behind. This was especially true of the Romanian units, who did not distinguish themselves, although in battle, but who advanced almost into first place in terms of punitive actions, looting and the most banal robbery. Both laughter and sin, but these “proud warriors” managed to whistle even baths from wealthy houses. Contrary to allegations in the strict discipline of the nemchury, they systematically pulled from the local population all that came to their eyes. True, preferring precious metals, food and clothing.

However, the liberation of the city besides joy brought sadness and bitterness. There were neither flowers, nor those who could give these liberators flowers. The city was empty, totally empty. The population has disappeared. Troops marched through the streets of Novorossiysk, destroyed by 96,5%. Some of the soldiers, the former Novorossiysk, were desperately searching for relatives in the ruins of their homes or at least some news about where they were. But all this was in vain. Moreover, hourly soldiers and sailors had to tear down Nazi ads, pasted on all the remaining city walls and pillars, which said that any civilian in the city would be shot. True, hope dies, as usual, last. Only a couple of days later, in a deaf basement, they managed to find a woman and her three children who had survived a miracle. This was an event that so clearly covered the situation in the liberated city that the 1 th secretary of the Krasnodar Regional Committee Peter Seleznyov wrote about this to the Central Committee of the AUCPB. 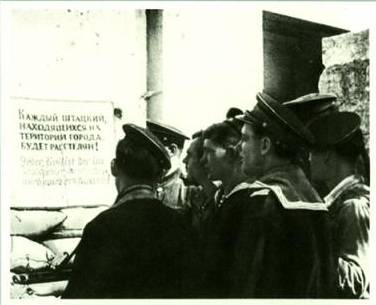 For a long time the troops in the city did not stay. The importance of pursuing the retreating enemy with the hope of driving him into the "cauldron" quickly forced the main forces to leave Novorossiysk, leaving the city a few garrison and partisan-Novorossiysk. Such as Petr Vasev, who had been an employee of the city committee on industry and transport before the war, and immediately after his release, he was appointed second secretary of the city committee.

The “inheritance” that went to the city authorities was not just complicated, but scary. The city after the departure of the troops began to resemble a ghost. But this ghost town was totally mined and littered with corpses. So that the population, who managed to evacuate on time, began to return, it was necessary to urgently solve these acute problems.

Therefore, judging by the acts found in the archives, in the first days of October 1943, a special commission was formed from representatives of local authorities and the military garrison. The main purpose of the commission was to bury the bodies of those killed during the liberation of the soldiers, but it was then that the true scale of the Nazi crimes on the shores of the Black Sea began to be revealed. No, of course, the authorities and the military were aware of the forced hijacking of the population in the Reich and executions, but the exact scale and daily practice of the attitude of the occupants to civilians was far from fully understood. The commission included Deputy Chairman of the City Executive Committee of Langovoi, representatives of the City Fire and City Health Department comrades Erganov, Sharkov and Grishay, as well as Captain Mandelberg. 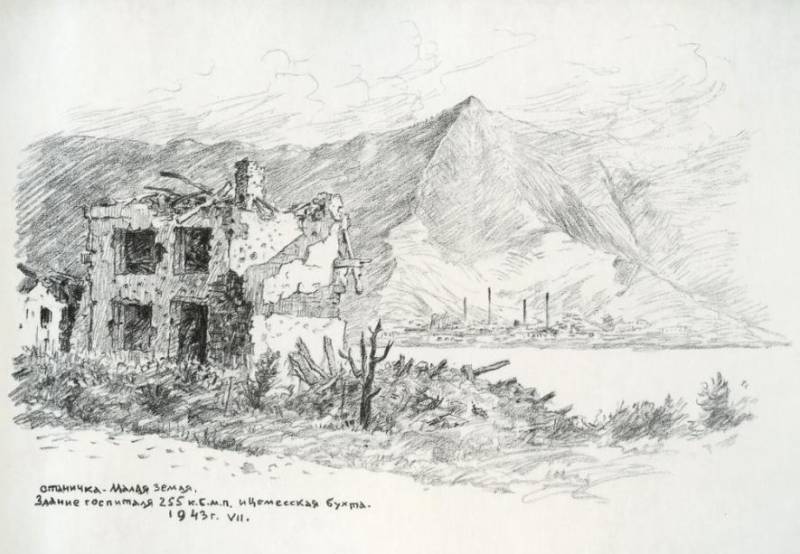 Despite the dry record-keeping coldness of the act drawn up by the commission, there is a cry for help through it. The commission stated that the corpses of the fallen liberators of Novorossiysk need urgent burial. Do not forget in September and early October, the southern city can still plunge into the suffocating heat for a whole day of light with all the ensuing consequences. In addition, there was no auto-transport in the city. But before the war, in the Novorossiysk region there were several state farms and farms that had, if not automotive equipment, then a sufficient amount of horse-drawn transport. Where did he go - a rhetorical question.

As a result, the commission abandoned the very idea of ​​creating a single military cemetery. Therefore, when they tell me that Novorossiysk is standing on its bones, there can be no offense here - only the bitter truth. The graves were often torn out right on the spot where the dead fighters were found. Slightly less, the remains were brought in to create a mass grave. This happened only when the dead were close to each other or in a separate fenced area. For example, they did it to those who died during the defense of DZOT Saraychik - the mass grave is now located on the territory of Spetsdorremstroy CJSC.

All returned local residents who could be found were attracted to the burial works. Still, in the acts appear meager numbers in 30-35 people, but the scale of the work was truly enormous. On October 6 alone, 1943 of the year about half a thousand soldiers were buried, not counting the fact that they had to arrange the existing graves and sometimes find them again. 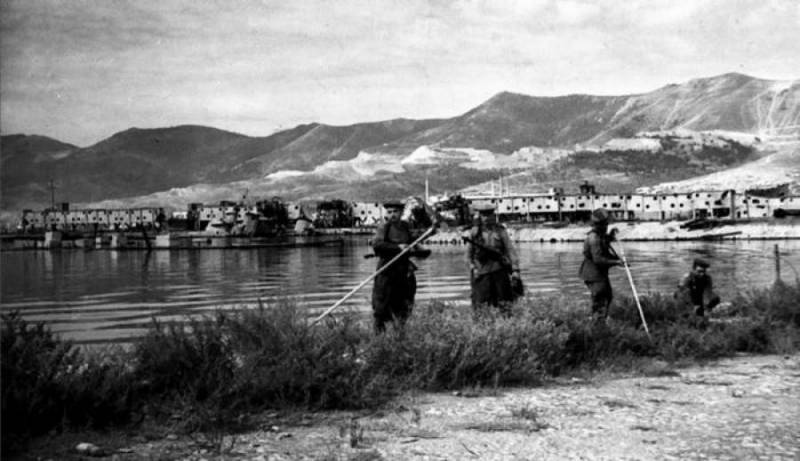 Demining in the devastated Novorossiysk

Besides groups of sappers-volunteers from especially peace people have been formed. Initially, they included only women. For each such detachment was attached a military miner, who taught the volunteers "on location".

It was during all this work that the first "evidence" of the European Ordnung got out of the ground. Human remains began to be found in crevices, ravines, narrow beams and ravines. Unfortunately, forcibly hijacked residents of Novorossiysk returned home slowly. Liberated by our units far from home, they faced a traffic collapse and all the "surprises" of the war. But they were most aware of the crimes of the Nazis, in contrast to those who managed to leave the city. It was valuable time, but even in these conditions, the authorities decided to launch a full-fledged investigation of Nazi crimes on the Black Sea shores.

Ctrl Enter
Noticed oshЫbku Highlight text and press. Ctrl + Enter
We are
To say “thank you” for the “innocently killed” Wehrmacht soldiers?Results of the week. "Well, do not change me because of every idiot!"
33 comments
Information
Dear reader, to leave comments on the publication, you must to register.