How has the country changed in the 18 years of Putin’s presidency?

January 25 2018
412
On these holidays, an important date actually slipped by - 18 years since Putin headed the Russian state. Nobody officially noted the date, and yet this is a good reason to sum up the interim results. After all, during this time, Russia has managed to once again become the global breadbasket, as in tsarist times, and even one and a half times increased industrial production. What else has changed? 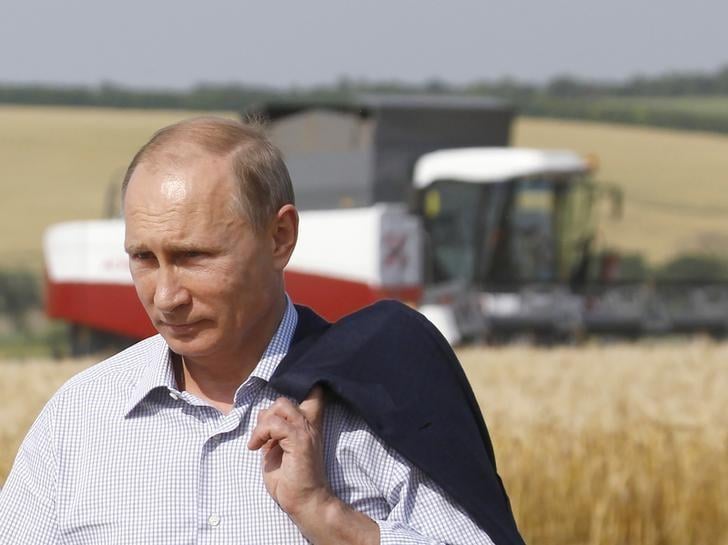 In the last days of December, experts summed up, but were limited only to the past 17 year. And here one cannot but agree with the press secretary of the president, Dmitry Peskov, who highlighted his economic successes in the first place, because Russia emerged from a two-year recession, in the first 10 months the GDP growth was 1,6 percent.

However, 18-th year will be, first of all, the year of elections of the federal level. Therefore, it would be much more interesting to look at a deeper retrospective than one past year. For example, consider what positive shifts and changes have occurred in Russia since Vladimir Putin was elected president for the first time in March 2000.

However, as is known, Putin, in the status of acting president, headed the country a little earlier - December 31 1999.

Yes, in recent years, the economy has been quite complex, taking into account the sanctions opposition of the West and Russia, as well as the financial crisis, many of the consequences of which we still feel. However, this crisis has been largely overcome, they have become accustomed to sanctions, and in the long run, serious progress is visible.

It is necessary to highlight two economic indicators, which for our country in 90-x were particularly painful - a huge national debt and inflation, which is not inferior to him. Over the past 18 years in this direction managed to make a huge breakthrough. Debt has decreased during this time as much as 22,7 times - from 69,1% of GDP in 2000 to 3,1% in 2016. Inflation also managed to win. If in 2000, it was 20,2%, then already in 2006, for the first time in the newest stories Russia fell below 10%, and as of December 4, 2017 of the year reached a record 2,5% in annual terms.

At the same time, Russia managed to increase its gold and currency reserves. During the reporting period, the international reserves of our country grew by more than 30 times - from 12 to 378 billion dollars. The overall recovery of the economy contributed to the growth of its investment attractiveness. Even against the background of the difficulties of the last years caused by the sanctions pressure, in general, the volume of investments has increased more than 2,5 times.

If these indicators for someone look abstract, then what could be more real than industrial growth? And he in 2000 – 2017 was significant. Russian industry showed an increase in production by 55,4%.
Agriculture, which many liberal economists for some reason did not cease to predict the collapse almost every year, did not lag behind either. However, the grain harvest almost doubled - from 65,4 million tons in the 2000 year to 140 million tons in the 2017-m. Moreover, the result of last year was absolutely breakthrough, since the record of 40-year-old was broken (127,4 million tons in 1978 year). Russia is again the largest exporter of wheat in the world, it regained the title of one of the leading suppliers of bread to world markets, which it occupied even before the First World War.

As Dmitry Abzalov, president of the Center for Strategic Communications, told VZGLYAD newspaper, in these 18 years the success of the economy, in particular the military industrial complex, contributed to the modernization of the armed forces. In addition to increasing the monetary allowance of the military and the general increase in army spending, cardinal reforms were carried out, the army was equipped with the latest weapons and equipment. In particular, only in 2017, the level of re-equipment of the army was 62%. Thanks to all this, a radically new image of the Russian Armed Forces was formed, which the world community could see, for example, in Syria.

Another successful area was the development of information technology, especially in recent years. The level of Russian programmers is confirmed by the first places at international competitions. In particular, in 2016, the Russians took all three prizes at the World Programming Olympiad.

The development of the IT segment has become possible, firstly, thanks to fundamental science, technical school, and secondly, thanks to the active growth of the domestic market and the achievements of Russian companies in foreign markets. Thirdly, due to the high development of the necessary infrastructure, such as the provision of Internet, in our country, said Abzalov.

Got out of the demographic hole

Another major area of ​​life in our country is demographic policy. And, perhaps, it was no less breakthrough than the economy. Everyone remembers the demographic pit of the 1990's. How is the situation now?

The increase in the birth rate was promoted by family support measures taken by the government all these years, such as, for example, payment of maternity capital.

- told Sergei Rybalchenko, Director General of the Institute for Scientific and Public Expertise, to Gazeta.ru.

It is difficult to isolate some of the most effective demographic measure - they work as a “package”, says Alla Makarentseva, head of the laboratory for research of demography and migration at RANEPA.

“If we talk about the last years, then, rather, it’s reducing the queue at kindergartens and the first steps towards making nursery groups accessible and generally adjusting the balance between work and raising children — all services related to childcare,” she emphasized.

Another important aspect of the demographic policy was the increase in life expectancy, which, by the way, also remains an important indirect stimulus for increasing the birth rate. Overall life expectancy over the 2000 – 2016 years increased by 6,6 and reached 71,9. And in 2017, for the first time in the history of our country, it reached the mark in 72,6 of the year.

The increase in natural growth and life expectancy, as well as the reduction of infant mortality are impossible without qualitative changes in the medical field, and this is not only the opening of perinatal centers. Public health financing from 2000 to 2017 year increased in real terms almost 3 times, and in nominal terms - from 204,5 billion rubles in 2000 year to almost three trillion in 2017-m.

Naturally, the increase in funding contributed to improving the equipment of medical institutions. In 2011 – 2013, 389,7 thousand units of various medical equipment were supplied to them. As a result, in only three years, the equipment of medical institutions grew 2,5 times. Accordingly, the development of high-tech medical care. The number of patients who received such assistance increased 2005 times in 2017 – 16: from 60 thousand to more than 960 thousand patients.
The creation of high-tech medical centers remains an important factor in healthcare, Dmitry Abzalov believes. If earlier it was necessary to go to Moscow for high-tech medical aid, recently the relevant centers appeared in many federal districts, which significantly improved the infrastructure, he stressed.

A large-scale free medical examination is carried out, which also contributes to the improvement of the population. The number of people who went through it, from 2008 to 2015, has increased 3,9 times in the year: from 5,8 million to 22,5 million people.

In addition, the ambulance fleet is being significantly updated (2307 vehicles in 2016, more 1446 - in 2017). At the same time, the traditionally difficult situation with health facilities in rural areas began to improve. Since 2000, more than 5, thousands of medical units have been commissioned in villages, of which 369 - in 2017.

No more queues to kindergarten

Not only the health of the population in the last 18 years began to improve, but also its literacy. And it’s worth starting with increasing the availability of education.

Improvements touched the quality of education. In particular, last year a record was set in terms of the number of schoolchildren who received the maximum 300 points on the exam, and the number of those who did not overcome the minimum threshold for the exam, on the contrary, decreased by half. In addition, while in 2001, Russian elementary school students occupied the 16 place in the international study of reading literacy, then in 2016, they have already risen to the first place.

Increased and spending on science. Civil science funding from the federal budget increased almost 20 times (from 17,4 billion rubles in 2000 to almost 350 billion in 2017 year), and basic research funding - in 14 times (from 8,2 to 117,5 billion rubles). All this contributed to the increase in the number of young scientists (at the age of 39 years). Since 2000, their number has grown 1,5 times, and today is 43% of the total number of researchers.

In addition to education and science, attention was paid to culture. For example, many new museums have opened. From 2001 to 2016, the number of public and private museums in the country grew from 2027 to 2742, while museums began to receive much more visitors - from 476 to 857 visits to 1000 residents.

At the same time, there was also an increase in interest in art among children. The number of children enrolled in art schools increased by 234 thousand people over ten years and in 2015 exceeded 1,5 million.

The most important factor that ensured all these achievements in economic development, including the inflow of investments, was political stability, says Dmitry Abzalov. Although changes in the price of oil during these years played an important role, he noted that the chosen economic course was also important, the targeted development of specific industries, for example, the military industrial complex, the IT segment or the agro-industrial complex, summed up the expert.

Ctrl Enter
Noticed oshЫbku Highlight text and press. Ctrl + Enter
We are
What you didn't want to know about EnglandMissed chapter "Strategy-2020"
412 comments
Information
Dear reader, to leave comments on the publication, you must to register.