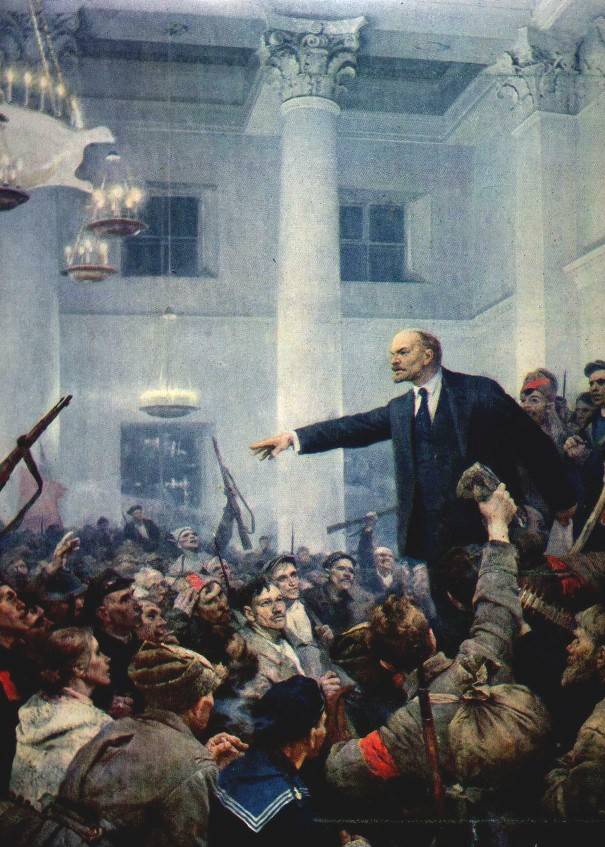 100 years ago, 25 January 1918, the Declaration of the Rights of the Working and Exploited People was adopted. It was one of the first and most important constitutional acts of Soviet Russia, which was aimed at legislative consolidation of the gains of the October Revolution and the proclamation of the basic principles and tasks of the socialist state.


The Great October Socialist Revolution for the first time in stories led to the elimination of the exploitation of man by man, of all forms of social and national oppression. The decisive historical decrees of the Soviet government on peace and land, written by V. Lenin and adopted by the 2nd All-Russian Congress of Soviets, played a decisive role in attracting the majority of the population of the city and village to the Bolsheviks. The Decree on Peace for the first time proclaimed the basic principles of the peace-loving foreign policy of the Soviet state, based on the principle of peaceful coexistence. The decree on land satisfied the age-old aspirations of the peasantry — the overwhelming majority of the Russian population; it created the conditions for a gradual transition to socialism in agriculture.

The election of the II All-Russian Congress of the Councils of the All-Russian Central Executive Committee (VTSIK) and the formation of the first Soviet government - the Council of People's Commissars (SNK), the laws on the creation of Soviet central institutions, the new court, the Workers' and Peasants Red Army, etc. laid the foundation for the construction of the Soviet state apparatus. The decrees abolishing the old ministries, the courts, the former army, the decree on combating sabotage and the dissolution of the counter-revolutionary parties undermined the rule of the former ruling classes and classes. The dictatorship of the working people was established.

Decrees of the Soviet government in the economic field - on the organization of workers' control over the production and distribution of products, the nationalization of banks, large industrial enterprises, commercial fleet and others, undermined the economic base of the domination of the bourgeoisie and laid the foundation for the reorganization of the old economy on a socialist basis. In particular, on December 14 (27), 1917, the All-Russian Central Executive Committee issued a decree on the nationalization of banks. By this act, the Bolsheviks broke the “backbone” of capitalism — the financial system. According to the plan of Vladimir Lenin, the nationalization of banks was necessary "to undermine the bourgeoisie’s dominance and the possibility of capital oppression over millions and tens of millions of working people." Nationalization extended to all joint-stock commercial banks, bank offices, mutual credit societies and joint-stock land banks. Assets and liabilities of liquidated banks were transferred to the State Bank. Soon, dividend payments on bank securities ceased. Banks' cash capitals were transferred to state ownership “on the basis of complete confiscation”: the withdrawal of money and precious metals from bank safes began. The People’s Commissariat of Finance, headed by Vyacheslav Menzhinsky, had to urgently organize a centralized financial and credit system. So, Russia was freed from financial dependence on the part of the “world community” and Russian capitalists. Created an independent financial and credit system, necessary for the normal development of the national economy, free from global and local “parasites."

The most important role in the nationalization of large-scale industry and the transition to the socialist principles of organization of the national economy was played by the decree on the organization of the Higher Council of the National Economy, initiated by Lenin. The creation of the Supreme Economic Council and local councils of the national economy laid the foundation for the creation of a new, yet unseen in history, type of apparatus for managing the entire national economy of the country. "... The apparatus of the type of the Supreme Council of the National Economy," noted V. Lenin, "is destined to grow, develop and strengthen, filling with itself all the main activities of an organized society."

Along with the solution of the fundamental, strategic tasks of the socialist revolution, the Soviet government also carried out tasks that were not completed by the February bourgeois-democratic revolution. A number of decrees eliminated landowner land tenure, class division, separated the church from the state, introduced the equality of women with men, and ended the remnants of semi-feudal relations in the social structure of Russia. The Declaration of the Rights of the Peoples of Russia, which laid the foundations of the Soviet national policy, became an important state act. Also in the decrees of the Soviet government did not forget about the situation of the working people. The laws on labor protection of workers and employees, on streamlining wages, on insurance against unemployment, sickness, etc., were aimed at improving the material conditions of workers. It is clear that in the conditions of the consequences of the collapse and ruin, the losses of world war, civil war, the collapse of the country and the intervention, there was no need to talk about a real improvement in the financial situation of the people. But in general, these measures were sent to the future.

The declaration consisted of 4 sections. In the 1 section, the political foundations of the Soviet socialist state were established. Russia was proclaimed a republic of Soviets of workers, soldiers and peasants' deputies, who hold all power in the center and in the localities. The Soviet Republic was established on the basis of the free union of free nations as a federation of Soviet national republics.

Further, the first successes of Soviet power in building a socialist society were recorded: 1) socialization of the land with the abolition of private ownership of land, the entire land fund became the common property and was transferred to the workers without redemption, on the basis of equalization land use. All forests, subsoil and waters of national importance, as well as exemplary estates and agricultural enterprises were declared national treasures; 2) the introduction of working control in factories, factories, mines, railways and other means of production and transport, the organization of the Supreme Economic Council. As a first blow to international financial capital, the Soviet law was considered to abolish (destroy) loans made by the tsarist and provisional governments; 3) confirmed the transfer of all banks to the ownership of the workers 'and peasants' state, as one of the conditions for the liberation of workers from the yoke of capital; 4) For the destruction of the parasitic strata of society and the organization of society, labor service was introduced; 5) To protect the gains of the revolution, the working people armed themselves, the Red Army was created, and the possessing classes were disarmed.

The 3 section of the Declaration reaffirmed the basic principles of the Soviet state’s foreign policy: the struggle for a democratic world without annexations and contributions, the abolition of secret treaties, respect for the national sovereignty of all peoples; a complete break with the barbaric policies of bourgeois civilization enslaving the working masses of the colonies and dependent countries; endorsed the proclaimed SNK independence of Finland, the withdrawal of troops from Persia, the declaration of freedom of self-determination of Armenia.

4-th section of the Declaration proclaimed that at the time of the decisive struggle of the people against its exploiters, the exploiting classes are excluded from participation in the management of the Soviet state. The power must belong entirely and exclusively to the working masses and their plenipotentiary representation — the Soviets of Workers', Soldiers' and Peasants' Deputies. The declaration emphasized that the Soviet power was limited to establishing the fundamental principles of the federation of the Soviet republics of Russia, providing an opportunity for the workers and peasants of each nation to make an independent decision on participation in the federal government and in other Soviet federal institutions.

Thus, on the planet for the first time a socialist state emerged that freed itself from social parasites (exploiters), oppressed some people by others, established social justice, thereby challenging "bourgeois civilization" and international financial capital (global parasites and predators). It was a breakthrough into the future, a chance not only of the peoples of a multinational Russian civilization, but of all mankind to a just world order without division into “elected” and “two-legged tools”.

Ctrl Enter
Noticed oshЫbku Highlight text and press. Ctrl + Enter
We are
A product called Revolution. Xnumx years of digestionOn the anniversary of the October Revolution without fanaticism
290 comments
Information
Dear reader, to leave comments on the publication, you must to register.