January 24 2018
92
Yes, today we can definitely say that what is happening in parts of the 20 Army of the Western Military District is a matter of concern, because it is not only about the security of our country, but also about security on the border with Ukraine’s most aggressive and unpredictable neighbor.


In the 20 Army today are concerned with celebrating the upcoming jubilee. It's good. But the fact that in our army units and subdivisions our ordinary army mess goes beyond the ordinary, this is not encouraging.

Also, in principle, not happy that from the useful for the state of affairs at the exit of some vague coven, pretty flavored with lies.

We return to the case of Captain Zolotarev, who has become impudent that he decided to tell the Supreme Commander (well, Zolotarev believed that such a thing is possible) about the facts of corruption and disgraces that occur in the 20 army.

Not all people know that the so-called website for appeals to the president is a fiction as a whole. But all who addressed there received a formal reply, and things were headed lower.

In general, it was not for the sake of everything that was mutated, so that everyone could take their thoughts to the president.

Today, at first sight, amusing events take place around and around Zolotarev. On the second - I want to cry.

And, naturally, materials have already begun to be placed in the media, the purpose of which is not to investigate what Zolotarev stated in his appeals, but, on the contrary, to discredit the captain as much as possible.

The beginning, as I understand it, with the filing of the Investigative Committee, was laid RIA "Voronezh". Well, I will not blame the correspondent of this provincial media Victoria Lushina for anything, except, perhaps, the fact that she absolutely did not bother to check the material. What she shoved, then placed for his signature.

And in vain. Truth there was on the strength of 5%.

“Investigators of the Voronezh garrison began checking after a video message from the former Belgorod military to Vladimir Putin. Captain Alexei Zolotarev complained to the president about corruption and arbitrariness in the military unit 34670 in Valuyki, where he served. The words of the man will be checked by law enforcement agencies, the main military investigative department of the IC of Russia reported on Friday, January 19.

One could be glad if everything was not so sad. We have repeatedly mentioned the Voronezh military investigators who are not capable of investigating the word at all.

These were appeals from the Don search squad and a complaint from citizen Gorin against lawlessness on the part of FSB officer Shchitov. These are the three cases of suicide in 2017 in Boguchar, where another part of the 20 Army is stationed.

“Don” never recovered from the losses, Gorin himself was to blame, suicides committed suicide for personal reasons. All is calm, all are free. I am sure that something like this will happen this time.

Moreover, it is fascinating that the military investigators, according to my information, are concerned not with checking what Zolotarev reported, but with the search for compromising materials on Zolotarev. From the moment of his admission to the Ulyanovsk SVU and to the present day.

"A former military man attached an audio recording of a telephone conversation with his boss, who threatened to" destroy "Zolotarev and his family."

She was not informed, however, that by the decision of the Kursk Garrison Military Court of 29.11.2017, the captain Zolotarev had not only removed the illegal and deceitful penalties, but had also canceled the order of the commander of the ZVO about dismissing Zolotarev from the ranks of the Armed Forces. 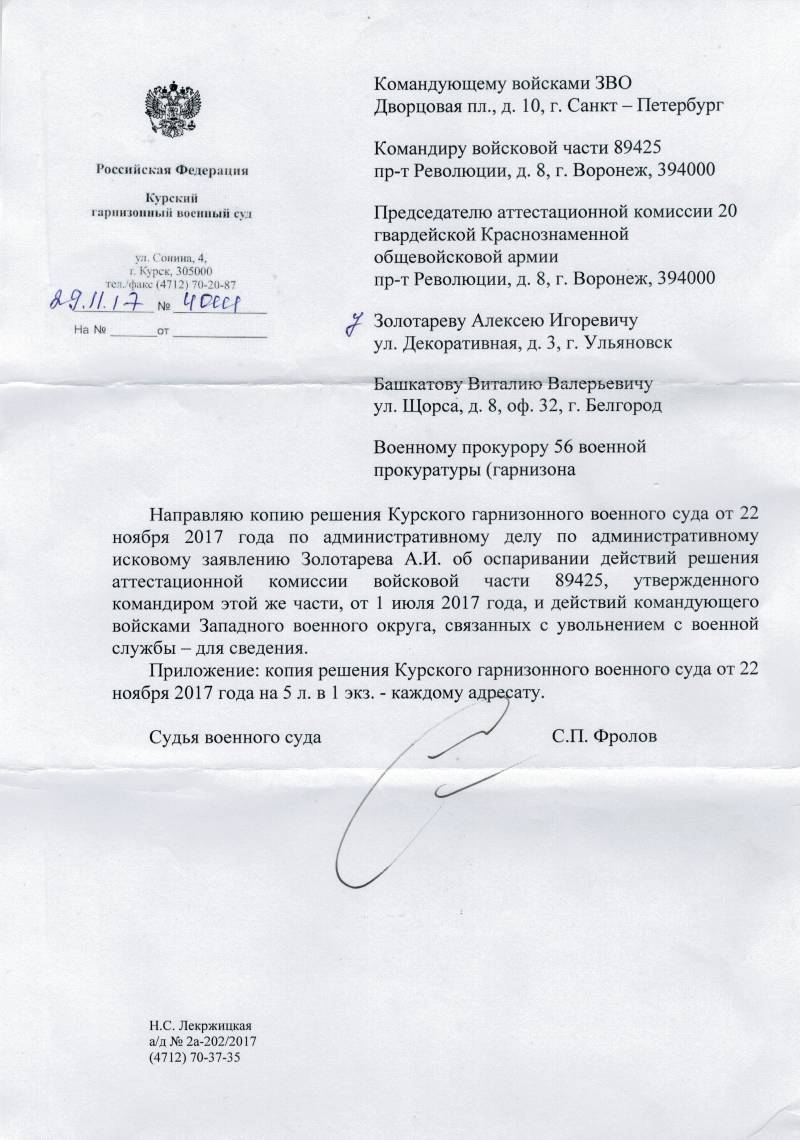 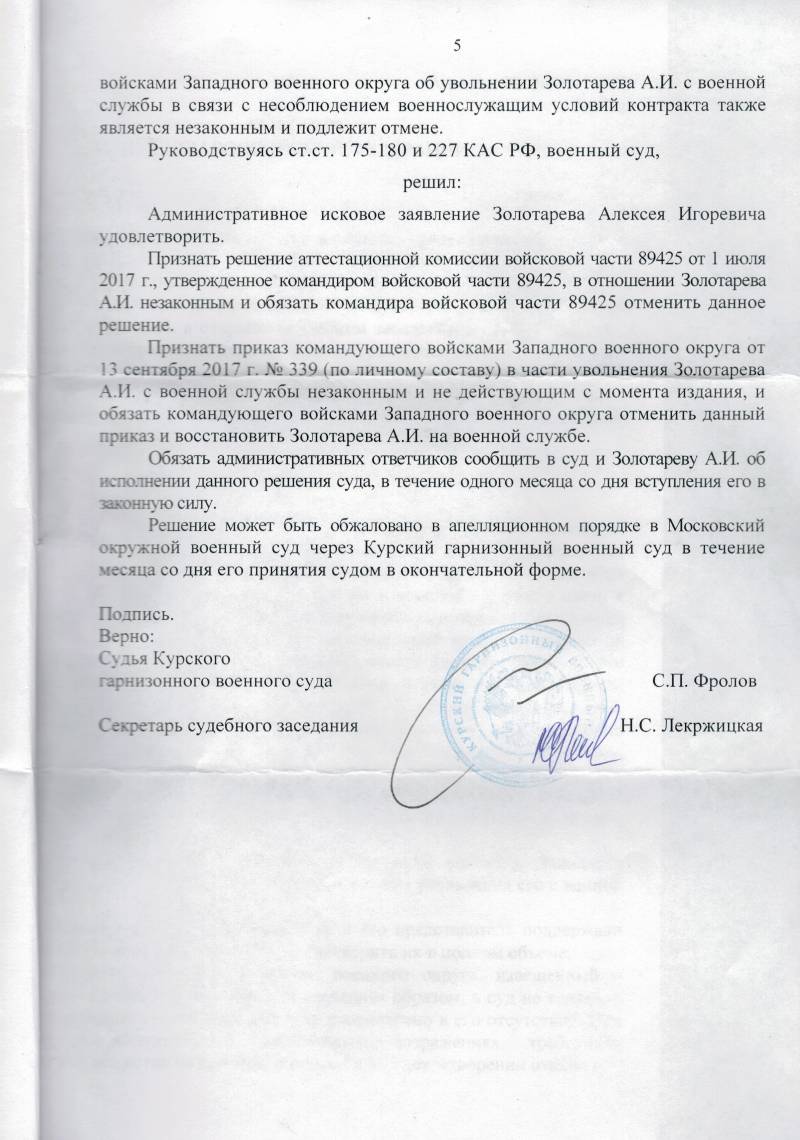 But we will return to the publication of the court decision a little later.

As for the conversation with the boss, who is threatening to "destroy" the family and Zolotarev himself. In quotes take the word "destroy" could only a person who did not hear the recording.

I heard the recording, and not the part that was given in Zolotarev's video message, but the whole one. Moreover, it is in my possession, and in the near future, as soon as the translation into the literary language ends, the recording will be posted.

Well, I'll just be happy if the investigators investigate anything. But again, doubt the car.

“The military also reported that in May 2017 of the year against Zolotaryov opened a criminal case, which is being considered in the Kursk Garrison Military Court. According to security officials, the man did not appear at work for more than a month, he was accused of failing to appear in the service (part 4 Art. 337 of the Criminal Code of the Russian Federation). ”

Yes, aroused. Blamed. And we will return to this case too. There lies a lie on a lie and chases nonsense. And we will analyze this "case" by bone.

“The accused repeatedly delayed the investigation of the criminal case, changing the version. In addition, Zolotaryov’s father turned to the military investigation department about mental and physical pressure on his son to obtain the “necessary” testimony. During the trial, these facts were not confirmed. The respondent on the merits of Zolotarev’s appeal did not confirm the facts of using violence against him, voicing threats, as well as committing forgery, ”the Main Military Investigation Department of the IC of Russia informed.”

I do not know why the gentlemen from the main military investigative department should lie, but they do it. At the very least, it would be interesting to see evidence of a delay in the criminal case against Zolotarev.

“Interrogated on the merits of the appeal” Zolotarev could not confirm the fact of an attempt to injure him. This does not mean that they did not try to beat him.

Go ahead. If the GVSU RF IC does not want to see the facts of forgery, then it will not see them. It's all clear. 5 “strogachey”, listed in a new, forged officer’s personal card, three of which canceled the court, and two withdrew the command of the unit as “erroneous” - this is not a forgery, no.

“Investigators said that Zolotarev complained to the prosecutor’s office about corruption schemes when he himself was under investigation. The military’s information was not confirmed, he was denied a criminal case. ”

Well, here there is a little almost truth. Indeed, Zolotarev wrote a part of 12 of his appeals when the investigation was conducted. But doesn’t a person have the right to complain to the prosecutor’s office if a case is filed against him?

Something new in military jurisprudence ...

About the fact that the information was not confirmed. It’s like looking for confirmation. If not, they will not find it.

I have a copy of one of the reports of Zolotaryov on my desk. And from him I, as a man who served, can understand what the captain is writing about. About fully disassembled cars. Which should be taken as fighting. But we will also talk about this document later.

Now I make the following conclusion. Pretty unpleasant for me.

In the 3 th motorized rifle division of the 20 th army there was a man who didn’t like some moments of military life in this division.

I understand that in other Zolotaryov service centers such a disgrace did not occur and did not steal it. And for some reason, Zolotarev didn’t want to write complaints somewhere. Everything is logical.

But after his appeals to the very top, instead of conducting an investigation of the episodes, the investigation rushes at full speed to cover their tracks and accuse Zolotarev of all grave ones.

Perfectly. The landing of Zolotarev, which the command of the unit is seeking today, will undoubtedly complete the disassembled RCMs, will block the sale of fuel and protect the "honor of the uniform."

But what honor are we talking about, especially in relation to Major Elizarov?

What honor are we talking about, watching people trample down the dirt in all available ways?

We trust Captain Zolotarev and will not leave this topic. On January 20 we visited Belgorod and Valuyki and met with several people. And on the basis of the information received, we will try to help Captain Zolotarev restore order in the 3-th MSD.

“Everything is good in our army” is, in our opinion, not that “everything is sewn and covered”. And vice versa.

Therefore, we will pay attention to the cause of Captain Zolotaryov. And at the same time to all those who wrote to the editor after the first publication. The most interesting is the letter of two soldiers from Boguchar who are ready to help shed light on the mysterious suicides in parts.

We want our army to be the one we dreamed about in 90. And the way it has become today, if we are told the truth. And, accordingly, we will make every effort so that it is such. And it was not a refuge for frank parasites who want to live well at the expense of our defenses.

Ctrl Enter
Noticed oshЫbku Highlight text and press. Ctrl + Enter
We are
How captain Zolotarev was kicked out of the army for turning to PutinResults of the week. "Well, do not change me because of every idiot!"
92 comments
Information
Dear reader, to leave comments on the publication, you must to register.