January 23 2018
17
The launch of the unprecedented ski march by paratroopers will be held simultaneously in ten cities of Russia, reports press office Ministry of Defense 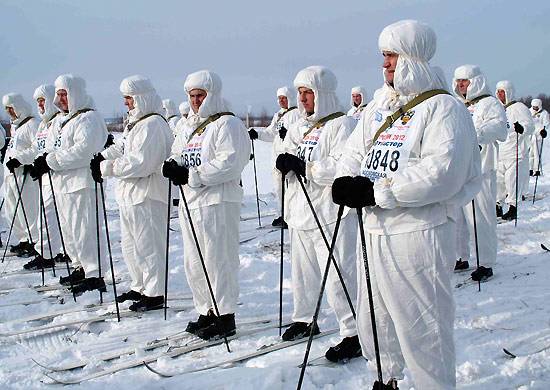 The ultra-long airborne skiing of the Airborne Forces (Airborne Forces) dedicated to the 100 anniversary of the Ryazan Higher Airborne Command School named after Army General V.F. Margelov will be carried out in a combined way. Around 300 military personnel will start at the cities of Novorossiysk, Pskov, Kostroma, Tula, Smolensk, Ulyanovsk, Kamyshin, Belgorod, Kubinka, Ryazan,
says release.

It is reported that "the farthest route more than 1300 km will be from the commando commando team from Novorossiysk, and the most difficult sections along the route are to be overcome by the team from Tula".

According to the ministry, “for the participation of skier teams in socially significant events of cities and towns located at a distance, the entire route was previously divided into ten separate parts with a finish in the Ryazan region.”

This event will be held in the Central, North-Western, Southern and Volga federal districts of the Russian Federation.

The start of the ski crossing with a total distance of over 7500 km is scheduled for February 3.