Russian base, billion dollars and protection from Israel: a cunning Jordanian plan

January 23 2018
46
Jordan is unhappy: US President Trump "ignores" her, while he strengthens ties with Saudi Arabia. Jordan is outraged by the financial issue: the Trump administration has previously allocated the Jordanian army 750 million dollars and has promised to increase funding to 1,5 billion. However, Trump chose to forget about it. And now Jordan is supposedly thinking of an “air military base” for ... Russia. True, the Russians must first give Jordan a billion dollars. And then give another billion every year. Apparently, instead of Americans. 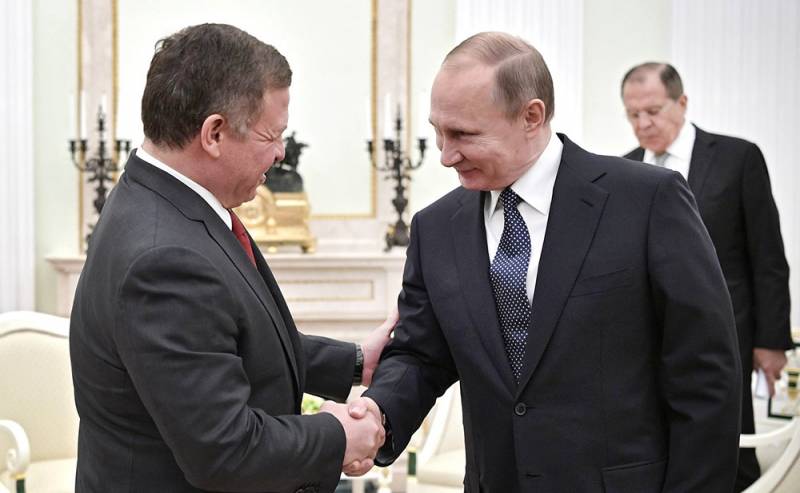 According to the Beirut newspaper "Ad-Diyar", US President Donald Trump "ignored" the Kingdom of Jordan and "gave priority" to Saudi Crown Prince Mohammed bin Salman. From here now all relations between Washington and the Arab countries are being built. This means that Jordan is very unhappy.

Jordan has already openly expressed its outrage against the aforementioned American position, as well as the position of Saudi Arabia. The latter cut financial aid to Jordan, and the Trump administration, which had previously allocated 750 millions of dollars to the Jordanian army and promised to increase the amount to 1,5 a billion dollars, did not fulfill its promise: it’s enough for you.

Jordanian King Abdullah II Ibn Hussein believes that during the alliance of Israel’s Prime Minister Mr. Netanyahu, Crown Prince of Saudi Arabia Mohammed bin Salman and the administration of President Trump (and “especially his son-in-law in the White House, Kushner”, the Lebanese edition maliciously notes the Jordan) in a dangerous position.

However, there is a way to resolve the crisis. The Jordanian king wants to pay a visit to President Putin, who is supposed to pay a return visit to Jordan later. We are talking about the request of Russia and the consent of Jordan to create a military air base for Russian aircraft in the province of Mafraq.

For Russia, there are certain territorial advantages: it is a vast territory for an air base, while the geographical area of ​​the Syrian base in Hmeimim, on the contrary, is narrow. A large air base in the region of Al-Mafraq will be located on the border with Iraq, Syria, Israel and near the Red Sea. Russian aircraft (for example, Su-35) will be able to climb to a great height and reach the Persian Gulf in some 10 minutes.

If Jordan, according to the publication, decides to take this step and gives permission for the creation of a military airbase, Russia must pledge to protect the Jordanian government from any attacks, even if they come from Israel. It would also give guarantees in respect of “any steps” of Saudi Arabia against Jordan.

In addition, Russia will have to give “to the aid of Jordan” 1 (one) billion dollars each year.

This is not all: leading Russian agricultural companies will have to invest in Jordanian agriculture. Why precisely agriculture? The fact is that agriculture gives the economy of Jordan more than two billion dollars annually, and its products are exported to the countries of the Persian Gulf. And if Saudi Arabia will block the transportation routes of products to exclude the transportation of vegetables and agricultural goods to the United Arab Emirates, Bahrain, Qatar and Kuwait, then Russia will have to abandon the idea of ​​supplying Saudi Arabia’s C-400 protection systems. Moscow will have to take an "anti-Saud position", the authors say.

Next comes Iran. The Russians can offer him their advanced ballistic missile system, since there is a “conflict between Russia and America”.

Russia has "hundreds of thousands of ballistic missiles that it no longer uses," and therefore it is able to provide these unnecessary missiles to Iran: for example, five thousand missiles in three months. The United States "will not be able to prevent Russia from doing this," the Lebanese newspaper is convinced. Tehran’s 5.000 missiles will be Iran’s “biggest threat” to the Gulf states and to US military bases in Saudi Arabia, Kuwait, the United Arab Emirates, Qatar, and others.

According to high-ranking Pentagon officials, airplanes can no longer be used in the war with Iran: after all, the Russians supply Iran with anti-missile defense systems (the article states C-400). In addition, Russia is clearly moving closer to Iran after the introduction of US sanctions.

What kind of rapprochement, the newspaper does not explain. Instead, there is an interesting statement about Moscow’s future deliveries of C-600 systems to Tehran (as in the original). Iran is supposed to become the world's first recipient of these missile defense systems. Today, the authors assure, C-600 is in service with "only the Russian army" and "is not sold to any other country except Iran." Iran will receive these C-600 and "will be able to hit American missiles and targets."

After meeting with US Vice President Michael Pence, we recall King Abdullah II saidthat "the Palestinian-Israeli conflict remains the main cause of instability in the Middle East." The Jordanian monarch believes that East Jerusalem should be "the capital of a future Palestinian state."

In addition, a meeting took place between the foreign ministers of Russia and Jordan Sergey Lavrov and Ayman Safadi. She is Passed in New York. According to the Russian Foreign Ministry, the parties "noted the inadmissibility of the escalation of the Palestinian-Israeli confrontation, particularly in East Jerusalem, caused by the decision of the US administration to recognize Jerusalem as the capital of Israel."

Also, diplomats confirmed the “principled support of the sovereignty, unity and territorial integrity” of Syria.

It is obvious that the intensity of contacts between Russian and Jordanian people is increasing, but allowing not only the creation of a large airbase in the kingdom, but also the multibillion-dollar financing of Jordan at a time when the Russian economy is in permanent crisis, seems to be a completely fantastic project.

The statements of the Lebanese press admitting Jordan’s Russian “defense” against Israel also come from the realm of fantasy. Obviously, some people in Jordan or Lebanon believe that Russia can afford to print as much money as the United States, and at the same time support the full weight of the ruble with military operations and military bases around the world. As soon as the Russian military bases spread around the world, Jordan probably learned from the press: reportedthat Moscow can “get” military bases in Sudan, then in Egypt, and in some way take part in the hostilities in Libya.

As for the supply of C-600 to Iran, there is absolutely nothing to comment on. Apparently, someone receives reports directly from the future.

Observed and commented on Oleg Chuvakin
- especially for topwar.ru
Ctrl Enter
Noticed oshЫbku Highlight text and press. Ctrl + Enter
We are
Time to change the heir. Qatari crisis as a cover for the struggle for powerOverseas ally? Donald Trump - US Presidential Candidate
46 comments
Information
Dear reader, to leave comments on the publication, you must to register.