January 17 2018
67
More recently, this tumor was not so noticeable. Hid, lurking in the depths of the social fabric. And suddenly she bulged to the surface in all her terrible mucous blackness, blue and bloody streaks. 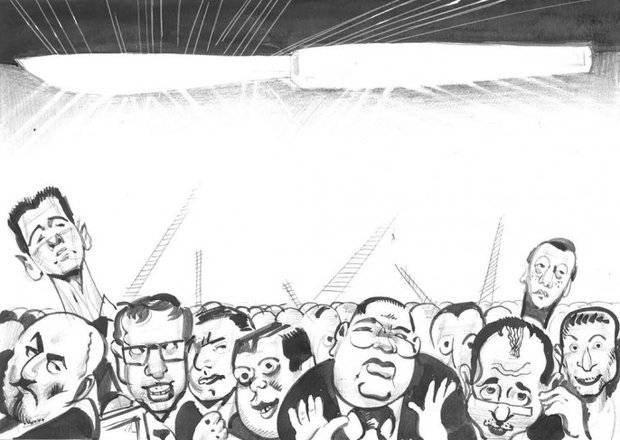 Glossy, pulsating, growing on the eyes, this tumor is insatiable, eats everything, requires new and new food. The cosmodrome will be born - a tumor eats it. Open oil field - and it eats the tumor. An icebreaking fleet will be built - it is also eaten by a tumor. She eats theaters, universities and churches. Drinks Russian juices, turns it into a dystrophic country. Russian impassability, mortality, boundless drunkenness, despair - everything is a product of this terrible tumor, which eats the living tissue of Russia, injecting deadly poisons into it.

Strange human-like creatures who have recently appeared as humans, created parties, corporations, taught us economics, politics, called for education and state administration reforms, these recent people turned into insane monsters, arthropods, spiders, carrying death to Russia. Their wealth is growing, and Russia's wealth is melting. They are full of vitality, and Russian forces wither. Their greatness is increased, and the greatness of Russia pales.

Happened unprecedented in stories blasphemy: the whole of the twentieth red century, Russia was straining - building factories and tops, plowing fields, building cities among the permafrost and sand. Stakhanovtsy fell from exhaustion in the faces. Millions of soldiers died on the fronts, not allowing the enemy to take possession of the national wealth. The host of heroes and martyrs created a great civilization, immortal values, sublime culture.

And all this went to a handful of villains who chewed on the entire Russian twentieth century. Seized the "Norilsk Nickel", which built the unhappy convicts. They assigned the Angarsk hydroelectric station, which was built by Komsomol enthusiasts. Became the owners of the fields of Kuban and Stavropol, where the millionaire collective farms once flourished. They seized the metallurgical giants of Lipetsk.

And the whole of Soviet Russia turned out to be a huge labor camp, where millions of miners, grain-growers, academicians worked, and then their work was shamelessly alienated and assigned to a handful of the worst, immoral and worthless people who existed somewhere under a bushel, lurked, mimicked. And when the time came for the Russian disaster, they got out of their cracks and holes and captured the emaciated red homeland.

Now this small handful, in a terrible mysterious way, came from the thick of a great nation to reign, to rule. She views Russia, this exorbitant continent between the three oceans, as her prey. This handful bought herself gold villas on the outskirts of London and on the Cote d'Azur, took her capitals from Russia and invested them in world banks. I hooked up to the Russian riches suckers that suck and suck Russian oil and gas, Russian blood and power.

These creatures are impunity. They are protected by the army and the police, they are protected by the courts and laws. They hate people who robbed and who hates them. They hate classical Russian culture, which is a terrible reproach and sentence for them. For Russian culture and Russian thought dreamed of a just country, fraternal relations between people, of a miracle of earthly organization. This wrote Pushkin, Dostoevsky, Tolstoy. A wonderful Silver Age sang about this. All this was covered by the great Soviet culture wrapped in bloody bandages.

And this new black tribe, which has neither nationality nor place of birth, contrary to the great culture, violating it, violates the universal law, according to which the world is organized, humanity is organized.

This tribe is not ruled by the Russian authorities. It is not governed by the president; it is not governed by the Duma and the Federation Council. This tribe is ruled by another civilization, other intelligence services, other economic and magical centers. And those centers moved this tribe to the Kremlin. These creatures began to move, they declared war on the state, war on the president of Russia. They transferred their money to the West, transferred their offices and offices, and there, outside of Russia, models and schemes mature in their minds, according to which the heart and liver are withdrawn from Russia.

The Americans are preparing a stunning report, which will tell the world about the black deeds of the Russian oligarchs and possessed officials. Tell about the account and black corruption schemes. Will show the mycelium corruption, which permeate the Russian neighborhoods and the Russian government.

And the black tribe trembles. Leases foreign intelligence secrets to the Kremlin's policy. They betray each other, trying to earn mercy from the cruel rulers in Europe and America, who will take away from them the unjustly acquired fortune - a state that belonged to Russia.

Batyushka Filofei, save Russia, ponder the president, shine his mind, read a cleansing prayer over him, point out this black tumor, where the Russian revolution lurks, the Russian massacre, the Russian terrible pain, and his president, death. Teach him the secret science of the Russian sovereigns and leaders, who at different times dealt with this evil in the depths of Russia scum. They cut out the diseased tumor with a sharp scalpel, as the great surgeon Pirogov did. Opened the way for growth and prosperity.

Father Philotheus, in these Christmas holidays, pray for us and for the Third Rome, for our beloved Russia!

Ctrl Enter
Noticed oshЫbku Highlight text and press. Ctrl + Enter
We are
"Who are you," Shooter "?"A.A. Prokhanov on Echo about Berezovsky, Navalny, the hero of labor, about Bashar Assad, about Syria, Libya, Korea
67 comments
Information
Dear reader, to leave comments on the publication, you must to register.