January 13 2018
7
In the introduction to his “Lectures on Philosophy stories"German philosopher Georg Hegel wrote:" Experience and history teach that nations and governments never learned anything from history and did not act according to the lessons that could be drawn from it. This phrase comes to mind when you begin to analyze today's events against the background of past, historical. 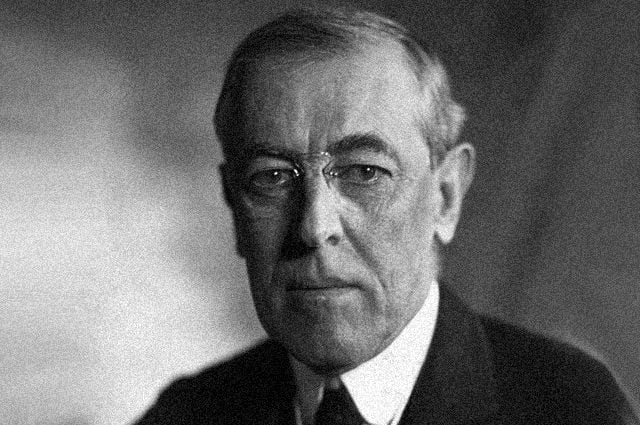 Exactly 100 years ago, January 8, 1918, US President Woodrow Wilson addressed the Congress with a speech in which he outlined his vision of World War I and its goals. This speech remained in history as the famous "14 Wilson's points" - theses, which then formed the basis of the 1919 Versailles Peace Treaty project of the year. Briefly, the essence of the document is as follows.

The first item was declared a comprehensive openness of peace negotiations. Any secret, backstage inter-state agreements and diplomatic agreements were categorically not allowed.

The second point provided for unrestricted maritime navigation, both in times of peace and war, with certain reservations.

The third condition of the document was the elimination of any possible barriers to equitable international trade.

The fourth point was for general disarmament within national security.

The fifth point envisaged the destruction of colonialism as such.

The sixth, dedicated to Russia, announced the need for Germany to liberate all the occupied Russian territories and to give our country the right to choose political development, and the “community of free nations” was imputed to “warm welcome” of Russia to its ranks.

The seventh point stipulated the complete liberation and restoration of Belgium.

The eighth point declared the withdrawal of the occupation of all French territories and the return of Alsace-Lorraine, which Prussia had owned 50 years, to her.

Establishing clear boundaries of Italy was the ninth point.

The tenth envisaged wide autonomy of the peoples of the Austro-Hungarian Empire.

The Balkans did not bypass this document - the liberation of Romania, Montenegro and Serbia was declared the eleventh point.

In the twelfth after the collapse of Austria-Hungary, the Ottoman Empire collapsed, and also provided for complete autonomy to the peoples within it, and the transfer of the Dardanelles under international jurisdiction.

The creation of a free and independent Poland was declared the thirteenth paragraph.

The last point was devoted to the creation of an equal community of united nations.

"CHARTER OF THE WORLD" OR UTOPIA

Speech to Congress was delivered at a time when the United States made the decision to participate in the war, citing the alleged danger to the country. The United States, through the mouth of its president, declared that the essence of the “14 points” is the American peace program and that they have the right to establish a new world order.

"14 Wilson points" relied on the conviction that the existing system of world order does not suit the majority of the inhabitants of the planet and the "poison of Bolshevism," which seizes the country, is nothing more than a protest against it. But in fact, the “14 points of Wilson,” presented as the “charter of the world,” turned out to be utopian, as British Prime Minister David Lloyd George and French Prime Minister Georges Clemenceau described them.

You can read and enthusiastic statements about this document, which is even credited with creating a favorable environment of international relations. But most researchers from different countries believe that the “peace program” covered up the US desire to establish its hegemony in international politics, and each item had a specific goal to weaken strong international players, such as the United Kingdom, France, Japan, Turkey and Italy.

The leading European powers were convinced that the true goal of the United States, veiled by the “struggle for peace”, is the everlasting desire of the overseas power to be a global leader by eliminating competitors by any means. And in the Soviet political literature, this speech was called "hypocritical." All that Wilson’s “14 points” consisted in was the establishment by the United States of its own world domination with more than successful use of the evils of countries involved in World War I. The establishment of a new world order or a unipolar world, where the United States will be the main arbiter of all countries - only Wilson's 14 points were sent to this, the analysis of which leads to a single conclusion: they were intended to disguise the aggressive policy of the States. But they needed such a policy primarily because of the victory of the October Revolution in Russia.

CHANGES TO THE BEST - NO

Virtually nothing has changed in the foreign policy of the United States and 100 years later. In November, Donald Trump won the presidential election on 2016. His main slogan during the election campaign was the phrase “Let's make America great again”. In particular, he promised that in the future the state "will again become rich and safe." And he confirmed this in the recordings on the eve of the new 2018 of the year on his Twitter, stressing that "America is becoming great much faster than anyone could have expected." As for Russia, the benevolent rhetoric of the current US president, according to many observers, masks the essentially anti-Russian course of the White House administration.

And from the 18 presented in December 2017, the National Security Strategy can be heard even bellicose statements like “We are entering a new era of competition ... A state that cannot win a war cannot protect itself ... America is back in the game and America is going to win.”

They say time heals, but it seems that they are not Americans. It is time for our partners to understand that they can no longer "single-handedly command a parade in all corners of the planet." More precisely, they cannot “not”, but the world community, led by Russia, will not allow them. The recognition of this geopolitical fact becomes the main component of the new emerging system of international relations.

A multipolar world is an idea for those who dislike the unipolar world of the United States. As we understand, no power will be pleased if the era of its absolute domination ends. Of course, we can assume that the statements of both Woodrow Wilson and Donald Trump were made wholeheartedly, with faith in their rightness and feasibility. But after the US Senate refused to ratify the Versailles Peace Treaty of 1919, the author of the “14 Points” abruptly left politics. And here it is appropriate to recall one more phrase, but already the Russian historian Vasily Klyuchevsky: “History teaches nothing, but only punishes for not knowing the lessons.”

Ctrl Enter
Noticed oshЫbku Highlight text and press. Ctrl + Enter
We are
Who is war and who is motherEnglish agents against Field Marshal Kutuzov
7 comments
Information
Dear reader, to leave comments on the publication, you must to register.