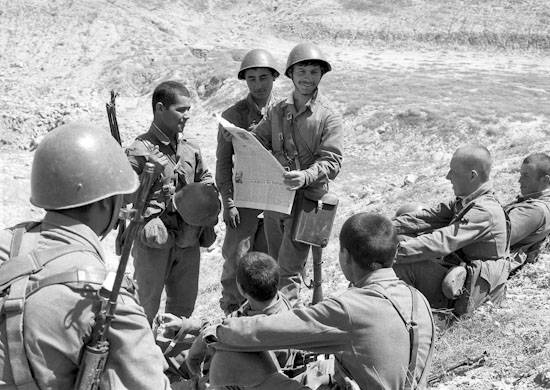 Exactly 30 years ago in the east of Afghanistan, the battle began for the height of the 3234 ridge of Jadran. The Russian man in the street has heard about the feat of the paratroopers of the 9 Company of the 345 Guards Parachute Regiment of the Airborne Forces according to the film The Ninth Company (2005) by Fyodor Bondarchuk. In reality, there were hundreds of similar battles during the war in Afghanistan (1979-1989). However, it was extremely rare that two Heroes of the Soviet Union appeared at once in one small unit.

About the feat 9-th company can not tell without history. Moscow had an extremely unreliable ally in Afghanistan. The weak motivation of the local pro-Soviet forces and their blatant illiteracy in military affairs led to an overload of the resources of the 40 Army stationed in the republic. As the Hero of the Soviet Union, Colonel-General Boris Gromov, recalled, the war in Afghanistan taught the Soviet troops a lot, but in the early years of the campaign it became clear that it had become protracted and meaningless for the USSR.

“The failure to consolidate the results of operations in the first years led to the fact that we were forced to return to the same areas several times. The local Afghan leadership, despite the pro-Soviet sentiment, was not interested in the fact that the fighting was conducted by us with maximum efficiency. Only a few of them in the "cleared" counties tried to consolidate their power and lead. Obviously, they understood that sooner or later the war would end, and besides them, there would be no one to hold the answer, ”Gromov said.

At the end of 1987, Soviet troops were forced to launch Operation Highway to ensure the transfer of troops and equipment to the Afghan-Pakistani border. The situation that Gromov was talking about was repeated. The pro-government forces lost control over the eastern provinces, and the Mujahideen, receiving reinforcements from Pakistan, were going to establish a new center of resistance there.

In December, 1987, the Soviet troops occupied the dominant heights near the region’s key road Gardez - Khost. Control of highways was of great importance in the Afghan campaign. Dushmans actually fought a partisan war, arranging ambushes for convoys with military equipment and foodstuffs. In addition, the militants are perfectly oriented on the ground.

Gromov, for example, recognizes that in the mountains (especially at an altitude of over three thousand meters), where heavy machinery could not reach, the Mujahideen in their capabilities were actually compared with more advanced Soviet units.

“Every soldier, sergeant and officer went to the mountains, carrying on his shoulders 40-60 kg. With such a huge weight, and even under the scorching sun, not everyone can just climb to the top, not to mention taking up the fight after that. Therefore, the commanders sometimes looked, as they say, over the fact that some soldiers left heavy equipment in the barracks before going to the mountains - body armor and helmets. They took with themselves only the most necessary things, without which, as experience suggested, it is impossible to do, ”Gromov writes.

"The whole mountain was littered with their corpses"

The 9 company was armed with two machine guns: a large-caliber heavy machine gun NSV-12,7 "Cliff", which covered the main positions, and a Kalashnikov machine gun of 7,62-mm caliber. For several days, the paratroopers erected 3234 fortifications made of stones, with which the Afghan land is rich. Judging by eyewitness accounts of the lack of ammunition, the soldiers either did not prepare for intensive combat, or played that very “height factor” when it was simply impossible to lift everything necessary.

The first attack of dushmans began on 7 on January 1988 of the year, presumably in 15: 00. According to the positions of the Soviet troops, the Mujahideen fired about 300 rockets and mines. After the artillery barrage, the full-length militants went to the assault. The density of the battle was incredible, reaching 5-10 meters in some areas. According to the paratroopers, 200-300 fighters participated in each attack.

“The perfume has already reached the 20-25 meters. We fired at them almost point-blank. But we didn’t even suspect that they would crawl even closer to the distance of 5-6 meters and from there they would start throwing us with grenades ... Everywhere there was a lot of blood, apparently, they had big losses. All trees and stones were riddled, there is no visible living place. The shanks of the “frontiers” (grenade launchers) stuck out in the trees, ”recalled Sergeant Sergey Borisov.

The Mujahideen were counting on a fleeting battle and, apparently, were confident that the resistance of the “garrison” of 3234 height would be broken in the first two or three attacks. In reality, spooks made about a dozen attempts to take height using mortars and rocket launchers. The battle lasted until the early morning hours, and ended with the retreat of the militants.

In the Bondarchuk film, a different picture was drawn: the spooks broke through the defenses and, during hand-to-hand combat, practically took the height, but were scattered by the fire of unexpectedly appeared Soviet helicopters. According to the film, the paratroopers were blockaded and were deprived of outside help. They say that is why only one soldier miraculously survived from the "garrison". In fact, out of the 39 fighters of the 9 Company, six people died.

For such a dramatization of real events, Bondarchuk received criticism for nothing. The position of the paratroopers was indeed very difficult, but the artillery provided enormous support to the defenders. The D-30 towed howitzers and Acacia self-propelled rigs worked near the height of dushmans. The adjustment was conducted by senior lieutenant Ivan Babenko.

In addition, the Soviet artillery prevented the further transfer of the Mujahideen from Pakistan, which actually attacked the Soviet soldiers. Calculations of the Grad and Hurricane multiple launch rocket systems destroyed clusters of enemy personnel and several Pakistani helicopters.

However, even with the support of artillery, the "garrison" could not survive without the arrival of reinforcements. On the night of January 8, four small groups of reconnaissance troops and fellow paratroopers broke through to the defenders of altitude.

“In 23: 10, the fifth, one of the most violent attacks on height, began. Using dead spaces, trees, under dense fire, dushmans approached the slopes of height from three directions. Including - from the established minefield. The forward detachments of suicide bombers made passes in it. According to their dead bodies, the rebels managed to get close to the distance of 50 meters, and in some areas - to the throw of a grenade, ”- said in the political report.

“In the morning, the whole mountain was littered with their corpses ... If only one or two attacks, and the end, we would not exist. There was practically no ammunition left: they threw all the grenades and even threw stones ... We dragged our dead and wounded into one pile without understanding. I remember how, in the morning, in the intervals between attacks, we, the surviving boys, envied the dead ... They were no longer scary, they would not be killed any more and would not be taken prisoner ... ", said Komsomolskaya the truth "Sergeant Vladimir Schigolev.

An invaluable contribution to the defense of heights was made by the calculation of the cliff machine gun, which included junior sergeant Vyacheslav Alexandrov and private Andrei Melnikov. Both were awarded the title Hero of the Soviet Union posthumously. The professionalism and courage of the machine-gunners did not allow the dukhmen to step over the fortifications.

“Squalling machine gun fire met the opponent of the guard junior sergeant (Vyacheslav) Alexandrov, whose decisive actions enabled his comrades to get out of the shelling and take more comfortable positions. Vyacheslav ordered his two assistants to withdraw and called the fire on himself. He shot until his machine gun, pierced by bullets, was not stuck, ”the text indicates in the text of the political report.

On the website of the project “Heroes of the country” about the feat of Melnikov, the following is said: “By targeting fire with a frequent change of position, Andrei Melnikov for a long time managed to repel the numerous attacks of the enemy. When the machine gun failed, the wounded Soviet soldier managed to throw a grenade into the thick of the militants, but he himself also died from the rupture of an enemy mine. ” According to Borisov’s memoirs, after the battle, “a piece of scrap metal” remained from the “Cliff”.

From reliable sources it follows that the successful defense of the height of the 3234 was ensured thanks to the professionalism and courage of the Soviet soldiers. At six dead paratroopers had at least dozens of dead dushmans. The “garrison” did not leave heights (and could not leave) to their fate. The events described in the Bondarchuk film do not reflect the real picture, although the director no doubt emphasized the heroism of the Soviet soldiers.

Vyacheslav Alexandrov, Vladimir Krishtopenko, Anatoly Kuznetsov, Andrei Melnikov, Andrei Fedotov, Andrei Tsvetkov (died in hospital) died in death of the brave. All 39 High defenders were awarded the Order of the Red Banner and the Red Star. Alexandrov and Melnikov are posthumously awarded the golden stars of the Hero of the Soviet Union.

Ctrl Enter
Noticed oshЫbku Highlight text and press. Ctrl + Enter
We are
Feat of the ninth companyBy the 70 anniversary of the landing and the formation of a bridgehead Small land
53 comments
Information
Dear reader, to leave comments on the publication, you must to register.