Who and why pushes Venezuela to default 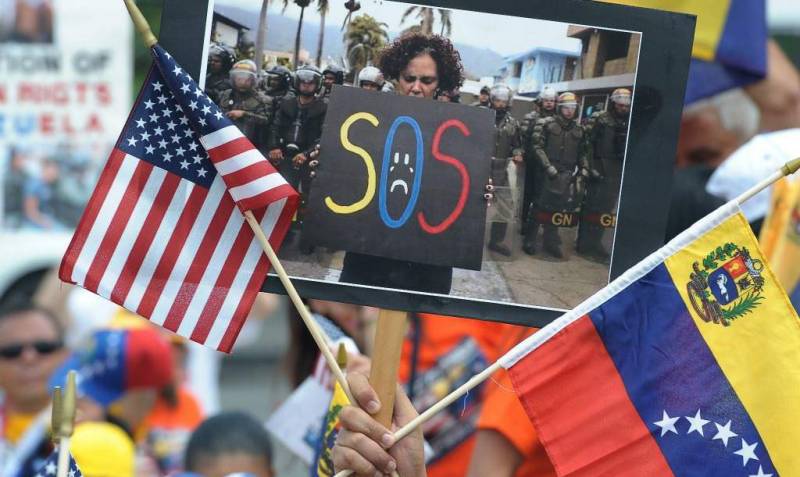 Venezuela was once one of the most prosperous countries in Latin America. Its prosperity, based on oil, in which Venezuela is in first place in the world in terms of reserves, began to evaporate in the 80s of the last century. It is believed that the reason for the change was the fall in prices for black gold, which gives more than 90% of all export earnings of the country.

There were other reasons that lurk. In 70-80-ies. The twentieth century Latin American dictatorships (Chile, Brazil, Argentina, Bolivia, Uruguay, Paraguay) with the support of the US intelligence agencies conducted Operation Condor, during which about 70 thousands of people - politicians, trade union and public figures, journalists, diplomats, scientists were killed. The operation was coordinated by then US Secretary of State Henry Kissinger, and the accusatory documentation for him is still kept at the International Criminal Court (ICC). Operation "Condor" hurt Venezuela, activated the fifth column in the country, provoked unrest. However, the organizers of the unrest achieved the opposite effect - instead of strengthening the pro-American regime, left-socialist orientation politician Hugo Chavez, who nationalized the country's oil industry, came to rule the country.

During the reign of Chávez, the wind blew into the sails of the Venezuelan economy: oil prices were high, which allowed the country to effectively resist the attacks of Washington. After Chavez’s death in April 2013, his associate Nicolas Maduro became president. He inherited a lot of problems - first of all, a huge public debt (70% of GDP at the beginning of 2013 of the year) and budget deficit (13% at the beginning of 2013 of the year). Nevertheless, 2013 year was not very bad for Venezuela against the background of high oil prices - the country's GDP grew by 1,6%. However, in 2014-2015, the economic situation deteriorated sharply due to falling global oil prices. According to the Central Bank of Venezuela, for the year 2015 inflation in the country amounted to 180,9%, prices for consumer goods jumped. In February, 2016 had to devalue the bolivar by 37%. At the end of 2016, inflation in Venezuela has already exceeded 800%.

The United States, meanwhile, added fuel to the fire. In March 2015, the then American President Barack Obama signed a decree on sanctions against a number of people from the Venezuelan presidential environment on the grounds that the country violated human rights, persecuted "political opponents", violated freedom of the press, used violence and arrests. Blacklists were compiled. The property of the defendants of these lists and their accounts in the USA were subject to freezing. In addition, US citizens were forbidden to enter into business relations with the defendants of the black lists.

25 August 2017, the new US president, Donald Trump, signed a decree introducing new financial sanctions against Caracas. Additional sanctions were a response to the creation of a Constitutional Assembly in Venezuela in the summer of 2017 and the “subsequent usurpation of the authority of a democratically elected National Assembly by this body”. Trump's decree prohibits transactions with new debt and securities issued by the Venezuelan government and its state-owned oil company PDVSA, which is part of a number of joint ventures with large foreign corporations. In addition, transactions have been prohibited that affect the current debt obligations of the Venezuelan public sector, as well as concerning the payment of dividends by the Venezuelan government.

I will not list many other details of the American fuss around Venezuela. All of them in aggregate show that Washington headed for the financial strangulation of Venezuela. More specifically - to organize the default of the country on its sovereign debt. What is the value of this debt today, it is impossible to say for sure. Official statistics on this subject Caracas does not publish. Analysts estimate Venezuela’s total national debt (including PDVSA debt) in 100-150 billion dollars. Government bonds and PDVSA for 60-70 billion dollars circulate in the market, China’s bilateral loans are more than $ 60 billion (though some of them are probably already repaid) and about $ 5 of billions in debt on loans from international organizations, in particular the Inter-American Development Bank. Russia's Venezuelan debt, as of September 2016, was $ 2,84 billion, and Rosneft also provided Caracas with several advances totaling $ 6 billion for future oil supplies.

In 2017, the situation for Venezuela is critical. At the beginning of autumn, the Venezuelan authorities recognized that by the end of the year it was necessary to make payments on debts in the amount of 15 billion dollars with the peak of payments in the last months of the year, in particular in October - 1,8 billion dollars, in November - 1,9 billion dollars. (despite the fact that the currency reserves of the Central Bank in the 2017 year fluctuated in the range of 10-12 billion dollars).

Venezuela was brought under the Damocles sword of default. The matter is complicated by the fact that the sanctions imposed by the decree of President Trump 25 of August 2017 of the year blocked for Caracas the possibility of negotiating debt restructuring with the holders of Venezuelan debt securities. Any debt restructuring means replacing old papers with newly issued ones, and buying new ones will be a direct violation of the sanctions.

Although Venezuela does not have official relations with the International Monetary Fund for the past 10 years, the IMF is closely monitoring the situation. If the IMF used to say that the most difficult country in the world in terms of debt is Greece, now they claim that Venezuela is an even more complex country. To restore imports to the level of 2015 of the year (35 billion dollars), increase consumption and partially restore fixed assets, Venezuela will need annual support for the balance of payments in the amount of 22 billion dollars. In addition, you need to finance the budget deficit, which is now around 7 % Of GDP. As a result, Venezuela will need assistance in the amount of 30 billion dollars a year.

And then the experts working for the IMF, reason like that. Such funds can only be obtained if Caracas succeeds in convincing the International Monetary Fund and its shareholders, including the United States, to provide Venezuela with “exclusive access” to international funds, and in return provide American corporations with “exclusive access” to the economy of Venezuela. The maximum loan per country is limited to 435% of the country's quota in the IMF. In the case of Venezuela, this would be 23 billion dollars, other international institutions can provide for 2 billion dollars, the US and European countries - up to 5 billion dollars for bilateral loans. As a result, the total amount of loans throughout the program could reach 32 billion dollars. Approximately such calculations appear in informal documents of the IMF, brought to the attention of Nicolas Maduro and his entourage.

The IMF is circling around Venezuela, but Maduro understands that he is being offered a shiny hook. Many countries have already come across such hooks, including Greece, Argentina, Romania (when the latter was still socialist). The ends of all the stories of "cooperation" with the IMF were equally sad, and with Greece история not yet over.

According to available data, Venezuela continues to make payments on the debt, but sometimes admits delays, finding itself on the verge of default. Rating agencies give the country extremely low ratings, which can be called “partial default”, “pre-default state” or something like that. There is no full default yet. A complete default threatens with the arrest of foreign state assets, and the country’s assets are considerable: primarily the state-owned oil refinery PDVSA, located in the United States, and the same network of gas stations that receive fuel from the oil refinery (about 40% of Venezuelan oil exports) . In addition, oil transported on tankers may be seized and confiscated. Foreign currency payments for export oil sent to PDVSA accounts will also be intercepted.

Finally, the international reserves of Venezuela can be arrested. By the way, during the time of Hugo Chávez most of the reserves were transferred to gold in order to protect them from possible arrests and confiscations. Today, according to some estimates, yellow metal accounts for about 70% of Venezuela’s reserves.

In the fall of 2017, the real salvation for Caracas was that Russia responded to requests for restructuring debts. At the end of October, the Ministry of Finance of the Russian Federation declared its readiness to restructure bilateral debt in the amount of approximately $ 3 billion. Under the new conditions, repayment will be carried out in two stages. For the first part of the debt will be “sufficiently preferential terms with a small amount of repayment”, and the bulk of the payments will be “transferred to the second stage of calculation”.

China also went to meet Caracas many times, restructuring its debts. In general, Venezuela is becoming the scene of a sharp struggle between the United States, on the one hand, and Russia and China, on the other. This is a struggle with high risks and high voltage for each of the parties, but the game is worth the candle. We are talking about huge reserves (1) of Venezuelan oil. The outcome of the struggle is unclear, but what is American imperialism, Venezuela has already understood very well.

Ctrl Enter
Noticed oshЫbku Highlight text and press. Ctrl + Enter
We are
The second edition of the plan "Condor". Blow to venezuela"Black" gold "dragons" and the US Federal Reserve. Part III
7 comments
Information
Dear reader, to leave comments on the publication, you must to register.