January 10 2018
97
At the turn of 2017-2018. dramatic news from Syria follow one after another, like from a Pandora’s box. The crash of a Russian helicopter in the province of Hama, two attacks on the Khmeimim airbase, heavy fighting between the Syrian army and terrorists in Harast (Damascus province), renewed shelling of the “moderate opposition” residential areas of the UAR capital, a new attack from Israel ... Against this background - the contradictions between Russia and the United States, as well as Turkey, which seemed to have forgotten who saved her regime during the attempted coup in July 2016, are becoming aggravated. 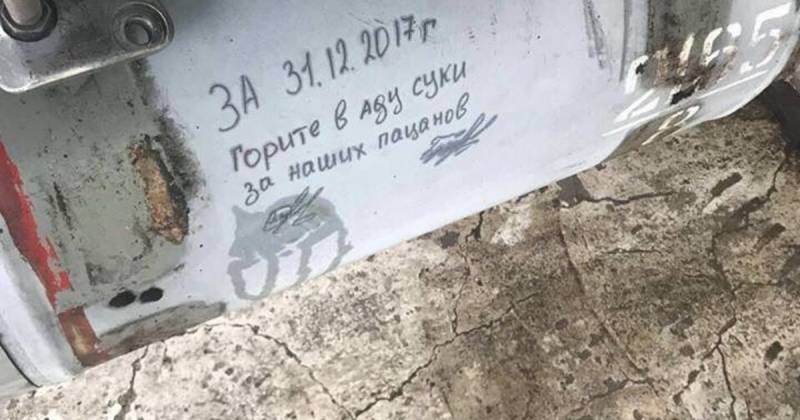 The most discussed event in Russia was the attack on the Khmeimim airbase 31 of December 2017, during which, according to the Ministry of Defense, two servicemen were killed. The Kommersant newspaper, known for its proliberal position, is either trying to thicken paint and sow panic, or in fact has received information from some source, as if seven Russian military planes were destroyed during this attack.

The Ministry of Defense of the Russian Federation in its statement refuted the information issued by the Kommersant:

“The message of Kommersant about the alleged“ actual destruction ”of seven Russian military aircraft at Khmeimim airbase is a fake. The Russian air group in Syria is combat-ready and continues to carry out all tasks. ” At the same time, however, the ministry was forced to report the tragic news: Two Russians did die as a result of "a sudden mortar attack on a mobile sabotage militant group."

Without sufficient data, it is impossible to say who is right: the Ministry of Defense or the Kommersant newspaper. And there is no need to guess - this is not the most important. It is only clear that Kommersant in the current situation (especially in connection with the upcoming presidential elections) published its material for a reason: it is unlikely that this newspaper moved such motives as tribute to the dead. Previous publications of this publication on the Syrian theme speak quite differently.

For my part, I consider it due to honor the memory of those who died, fulfilling their international duty, only a little before the new, 2018 year. And to express condolences to their families and friends. According to available data, the names of the fallen December 31: Artem Kulish, Valery Matveev (died due to helicopter crash in Hama province) Timur Davlyatov, Renat Gimadiev (were the victims of the attack on the Khmeimim airbase). These guys have joined the heroes who previously gave their lives on the distant frontiers of our Motherland, honor and praise to them.

6 January 2018 was followed by a new attack on Hamim. This time - with the help of drones. The attack did not have serious consequences - it was reflected. But on the other hand, it caused new disputes between Russia and the United States on the eternal theme of “who is to blame.”

And here, Turkey has also taken a step that is clearly not friendly to Russia. The Erdogan regime once again demonstrated hypocrisy and sitting on two chairs, clearly playing along with the Americans along with their “favorite toy” - the “moderate opposition” of Syria. As if by order, it was at the time of the aggravation of the situation in the UAR itself and between Moscow and Washington that the Turkish Foreign Ministry summoned the ambassadors of Russia and Iran to explain.

Turkey’s discontent is related to the situation in the province of Idleb. The Syrian army and its allies are accused of “violating de-escalation zones”. It is worth recalling: in the territory of Syria, there are now four de-escalation zones created by painstaking negotiations. One of them is Idleb province together with a part of Hama province, the other is located in Homs province, the third is Eastern Guta (Damascus province), the fourth is part of Daraa province in the south of the country.

Turkish Foreign Minister Mevlüt авavusoglu claims that the Syrian army is fighting not with terrorists, but with “moderate opposition”. This accusation was the occasion to call the ambassadors of Russia and Iran.

However, the regime of Erdogan prefers to keep silent about the fact that in the region of Eastern Guta this very “opposition” has frustrated the agreements, which has aggravated the situation in Harast. On the night of January 1, gunmen surrounded the base of the Syrian army, which suffered heavy losses. Four brigadier generals were killed. By now, however, the servicemen have broken through the blockade of the base, and the fighting is taking shape in favor of the SAR Armed Forces.

As for the province of Idleb, then, according to the latest data, it was from there that the attack took place at the Khmeimim airbase, as well as at the Tartus logistics center.

"The launch of drones was carried out from the area of ​​the settlement of Muazar, located in the south-western part of the Idleb de-escalation zone, controlled by armed formations of the so-called moderate opposition",
- Said the Ministry of Defense of Russia.

So much for the "de-escalation zone"!

Many experts agree that such an attack could not be carried out without US support. Washington categorically denies any involvement in the attack, stating that any amateur can collect such drones by buying spare parts in the Chinese market. However, MO experts emphasize that in order to program the UAV control controllers, you need to have a “decent engineering school in one of the developed countries." In addition, you need to know the exact coordinates. Apparently, “someone” provided the militants with space intelligence data. Moreover, by a strange coincidence, during the attack on Tartus and Hamim, an American reconnaissance aircraft was seen.

Anyway, the call of ambassadors to the Turkish Foreign Ministry is, of course, unpleasant. But diplomats know their stuff, and the Russian military know what to do with terrorists, even in the so-called “de-escalation zone”. Such attacks should not get away with it. No wonder on one of the bombs wrote: “Burn in hell for our boys”...

Ctrl Enter
Noticed oshЫbku Highlight text and press. Ctrl + Enter
We are
Weekly summary (30 January-5 February) on the military and social situation in the DPR from the military officer "Mag""Magician" about Donbass. Weekly summary
97 comments
Information
Dear reader, to leave comments on the publication, you must to register.