January 9 2018
38
Now, only for the initiative of restarting relations with Russia can be followed by prison threats. And not to anyone, but to the president of the state. And this is not in some unknown “banana republic”, but in a country whose government and parliament claim to be the spokesmen for “European democratic values”. 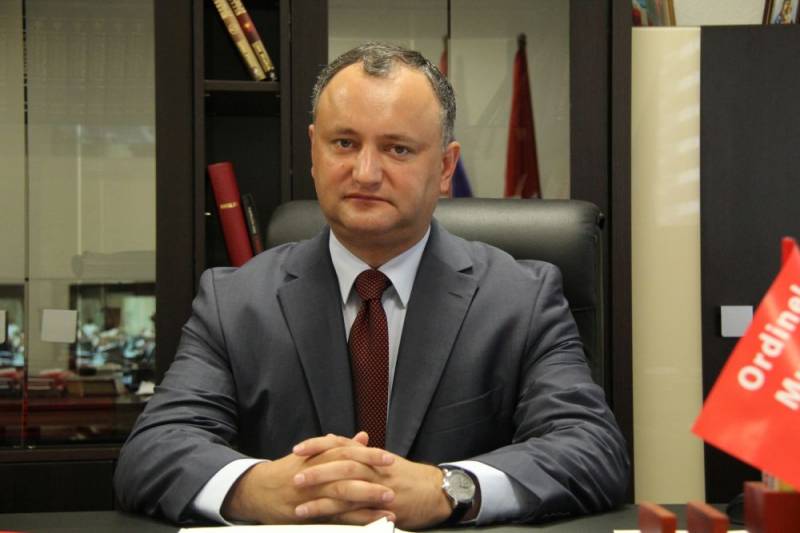 The conflict between the president of Moldova, socialist leader Igor Dodon and the “pro-European” minded parliament is gaining momentum. Do not have time to start this year, followed by a new round of this conflict. President Dodon opposed the appointment of five new ministers (out of nine) and two new deputy prime ministers, because, as often happens with “true democrats,” some of them have a dubious reputation.

The Democrats appealed to the Constitutional Court, which ruled to partially restrict the powers of the president with regard to the appointment of new members of the government. Now they will be approved either by the chairman of the parliament or the prime minister. By its decision, the court accused Dodon of “inability to fulfill the duties of the president.”

Moldova, according to the constitution, a parliamentary republic. The head of state has the right only two times to reject the ministers proposed by the parliament. Such a case was already in October last year. Igor Dodon refused to approve Defense Minister Yevgeny Sturz. "Democrats" stubbornly went to the aggravation of the situation and did not provide other candidates. As a result, the Constitutional Court transferred the right to appoint the Minister to the Chairman of the Parliament, Andrian Canda. And here the situation repeats. Candu rejoices at the decision of the Constitutional Court and blames the president for arranging an “institutional blockade” and “ignoring the provisions of the basic law”. This is a serious accusation, especially in a political crisis.

Dodon himself, in his blog on Facebook, accused the Constitutional Court of being “confirmed his image as an obedient political tool, not a constitutional body'. "This is a shameful and regrettable fall for a state that claims to be a democratic“- added the Moldovan leader.

The scandals associated with the new ministers - is the reason for the attacks of the "democrats" on the president of Moldova and attempts to limit his powers (and in the future - and overthrow). And the reason is that Igor Dodon, in a different way than these “pro-Europeans”, looks at the relations between Chisinau and Moscow.

Unfortunately, the country's leader has his hands tied. For example, he considers Crimea the Russian territory, but he is not able to even determine the country's position in the international arena. As a result, Moldova at a recent vote in the UN General Assembly supported the anti-Russian resolution on Crimea. Contrary to the will of his president ... But he is especially hard inside his own country - even journalists invited by him personally are forcibly expelled from Moldova as “Kremlin agents”.

In early January, Dodon gave an interview to TASS, in which he stated: “I am a supporter of the reboot of relations between Russia and Moldova at all levels, which will help relieve the tension that has arisen between our countries last year.” According to him, the tension between Chisinau and Moscow is unacceptable - it is directed against the interests of both the Russian and Moldovan peoples.

«The parliament and the government are well aware that I will never sign laws and decisions aimed at worsening relations with Russia. During the popular presidential election, the Moldovan people gave me a mandate to restore partnership with Russia, so I am doing everything in this direction, in which I found support from the Russian president. And from this course I will not back down“- he stressed.

Dodon discussed the issue of "resetting" with V.Putin at the end of the past year, at an informal CIS summit that was held in Moscow. In January, a delegation of the Ministry of Foreign Affairs of Russia should arrive in Moldova to discuss this issue.

Unfortunately, there are forces that help to ensure that the “reset” does not take place, that Russian-Moldovan relations do not reach a new level. For this, the “democrats” in parliament do not make concessions about the appointment of new ministers with a dubious reputation, knowing that this will lead to scandal and to a limitation of the powers of the president.

The Democratic Party won not so many votes in the parliamentary elections in 2014. She got the 19 seats (total deputy in the 101 parliament). Unfortunately, having gathered defectors from various parties, the “democrats” now have a majority - 60 votes. This is what they use in tying Dodona’s hands, especially with regard to Russian-Moldovan relations.

But are the “democrats" who call themselves this word really worthy of such a title? In fact, it turns out that they are in favor of restricting democracy. In particular, under the guise of combating "Russian propaganda" they want to ban a demonstration on TV News from Russia.

Dodon refused to sign the law "On the fight against propaganda," calling it "an encroachment on the freedom of citizens." According to him, "it's about censorship based on double standards in the style of the ruling democrats».

The matter has already reached threats to the head of state. On January 7, the chairman of the Constitutional Court Tudor Pantsyru proposed to introduce criminal liability "for non-compliance with constitutional duties". It is nothing but an attempt to crack down on Dodon for refusing to sign the law "On the fight against propaganda." Non-adherence to the Russophobic position is regarded as “non-fulfillment of constitutional duties”.

However, the time of the "Democrats" is not so much. In the autumn of 2018, parliamentary elections are to be held in the country. The people of Moldova, voting for Dodona at the end of 2016, demonstrated a commitment to cooperation with Russia. Therefore, now the balance of power in the parliament can change greatly - in favor of the Socialist Party and those who are taking a sober-minded position on relations with Moscow. It is clear that not only the “democrats” themselves will try to prevent this, but - most importantly - their external patrons. The word, however, the people say.

Ctrl Enter
Noticed oshЫbku Highlight text and press. Ctrl + Enter
We are
Reports from the militia of New Russia for 27-28 September 2014 of the yearResults of the week. "Well, do not change me because of every idiot!"
38 comments
Information
Dear reader, to leave comments on the publication, you must to register.