Liberal hardcore instead of Olivier salad

January 9 2018
32
The 2018 year has come. The first “feed” of the morning “press” took place. In general, everything is in a relatively balanced and quiet news mode. Although ... There are directions of the "press" and its individual authors, who, even on holidays, could not afford to do without sprinkling everything and everything with a foul-smelling substance from the series "everything is bad, it's time to throw it down." Fans of mattresses (in the literal sense of the word ...), fugitive, caught stealing politico-businessmen, candidates and other lights of irreconcilable opposition in a single rush, eagerly began to stigmatize the "bloody gebni", "Kremlin regime" and all from the same series. The record is so jaded that there is a crash and a fair rustle, which, it seems, is not just a whimper only to the authors of opuses about “grimy Russia” - according to their duty, so to speak, service. 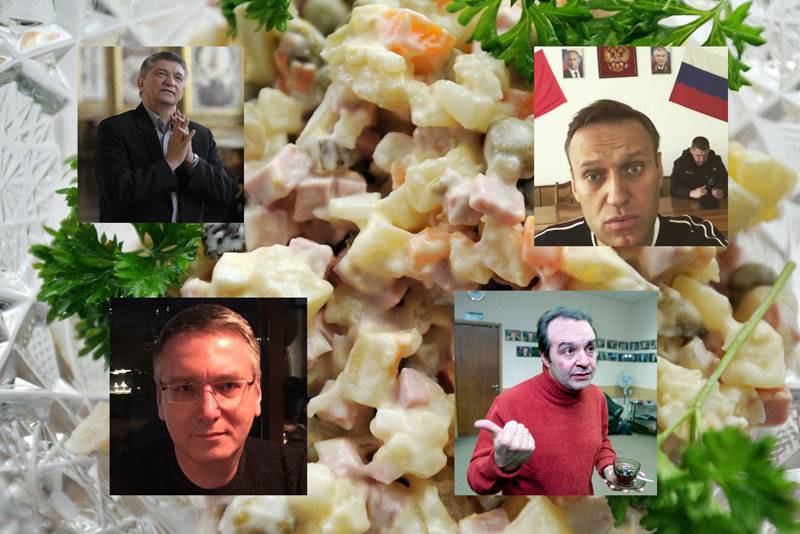 One of the first to distinguish himself was the film director Alexander Sokurov, who chose such a self-speaking platform as Radio Liberty for statements. Well, a person suffers from lack of freedom, tries to tear chains and chains ... And Alexander Nikolayevich is shackled with chains of "gebni", how firmly is that this same "gebnya" promoted the presentation of three State awards of the Russian Federation to Mr. Sokurov.
According to the film director, “suffering from lack of freedom”, all the problems and troubles of Russians are connected with the expanses of Russia. Well, too much, it turns out, we all “swallowed up” the territories in order to digest it all now.

Here in Canada, apparently, everything is different. There, the territory “to the very outskirts” is the most democratic, and therefore Canadians have no problems, unlike the Russians, and there are no problems. Canada will not “squeeze”, and Russia, according to Sokurov, will “squeeze” by itself - you see, Russia has karma.

Why? - we will give the Kurils to the Japanese, the Crimea and Kaliningrad - NATO, the bowels of Siberia will be made “common human” property, let's move the movements “Stop feeding Moscow”, “Stop feeding the Caucasus” and so on “Stop feeding each other”, then it will be exactly that! In the Bavarian beer we will bathe from morning till night, gay ballets will watch every Friday, again we will rejoice in the spiritual surge in the form of humanitarian aid with chewing gum and worn star-striped panties from our partners.

What is called, "delivers" and "Echo of Moscow". There, in general, choral singing is unhappy, discontented and bitten by the regime. Bloody, of course ... The main page of the “Ehov” site is a whole kunstkamera, which attracts special attention, often causing a steady feeling of disgust ...

Authors on "Ehe" dissatisfied, well, literally everyone. From the movie "Moving up" to the framework of metal detectors at the entrance to Red Square. From the call of Patriarch Kirill to the Russians to come to the polls in March to the fear of a terrorist to return home to Russia because of criminal prosecution. Seriously...

The graduate of the London Business School Sergey Lyapunov (he himself is exclusively in English) is abundantly quoted, who complains about why in Russia they made a film about the victory of the USSR basketball team for the USA team, but did not make the film according to this scenario:
... Soviet Motherland heartlessly trampled every third basketball player of that team. In addition to Alexander Belov, this is Alzhan Zharmukhamedov, who a year after the Olympics for customs violations was deprived of his zms title, Ivan Dvorny, who received three years in prison for a similar offense, and Mikhail Korkia, who redeemed the term for illegal entrepreneurship. Life in the scoop generally thoroughly patted our champions. Of the twelve players of the USSR basketball team in Munich, only four are alive today (eleven of the twelve Americans are alive).

Iron "London" logic ... Approximately by the same "logic": if 1972 representatives of the Israeli team died at the 11 Olympics of the year in Munich, should they be considered victims of "life under the Zionist regime"? Or, should the American athlete Aaron Hernandez be considered a victim of life under the American regime who committed suicide in 2017 in the Massachusetts state prison? No, of course, Mr. Sergey Lyapunov does not think so, because this is the country of the victorious democracy, and not some kind of "scoop" ...

And this is from the same post. Leave no comments ...
However, that year was complete. The Kosygin reform in the economy skidded hopelessly, and before the crazy jump in oil prices remained even more than a year. Landing on the moon, John Young put a winning point in the space lunar race, which the USSR lost outright to the Americans.

In the first days of the coming 2018, the shooter of the disagreeing Mr. Shenderovich was noted. In the air of “Special Opinion” on “Echo of Moscow” from January 4, a visiting writer (or who he is there ...) Shenderovich branded the authorities for being in the center of Moscow (quote) “everything is in fences, in aisles” and that Red Square "turned into a correctional institution." According to Shenderovich, he "just arrived from New York, which is closer to the epicenter (of terrorist danger)" and "there is no visible concentration camp, there is no visible correctional institution."

The first question arises: why then did he return to Moscow if there are no metal detectors or a “concentration camp” in New York? And the second question is: where in New York did Mr. Shenderovich visit the Christmas holidays, if the center of the largest US city is blocked by fences and frames so that tourists could only see the lights of the main tree from a distance of a hundred meters, by the police’s ban? having the ability to rely on a metal mesh fence. Or Mr. Shenderovich listened to Christmas carols somewhere on the island of the Bronx, or "one of two."

It must be assumed that the same Mr. Shenderovich would have shed a stung boar if, God forbid, a crime with a terrorist tinge had been committed in Moscow on holidays. Without passages and metal detectors ... "The bloody regime did not spot", "The people were set up for a terrorist attack." Well, you understand ...

Released on the "Echo" moaning and other dissenting and simultaneously frustrated candidate. This, of course, is about A.Navalny, who now has complications in the form of persecution mania. A whole separate blog with a twitter post already in the 6 lines:
The second day in St. Petersburg is followed by the same guys. Julia and I are already greeting them. UNACCEPTABLE! 1. Violation of labor law - people should be replaced. 2. Well, who does that? In Beautiful Russia of the Future, spying on people will be conducted according to all the rules.

A non-candidate tries to troll, exposing himself as a person, “worthy” of surveillance. I wonder who would be able to “follow” such a person if Alexei Anatolyevich himself reports on each of his steps and actions, up to reports on what he has the opportunity, “with total gebni”, to fly to rest outside Russia, while having the status of a convict ... Something with “gebney” is not that ...

In general, the ultra-liberal brethren, and those who dress themselves so skillfully, spent the beginning of the year with benefit - so many cams shrinking in indignation from the actions of the regime! .. What celebration is there, what kind of salad is Olivier only hardcore, only reproof tyranny! ..

Ctrl Enter
Noticed oshЫbku Highlight text and press. Ctrl + Enter
We are
Results of the week. “In our cooperative, the board is always agreed”Results of the week. "God forbid to see Russian revolt, senseless and merciless!"
32 comments
Information
Dear reader, to leave comments on the publication, you must to register.