January 9 2018
68
A common place was the assertion that Russia does not have a coherent strategy for Ukraine. You can say, of course, that the “lack of strategy” is also a kind of strategy, but Russia has a “Ukrainian” strategy. Only this strategy is not simple and clear, of an offensive nature, which seems to be the only correct one. 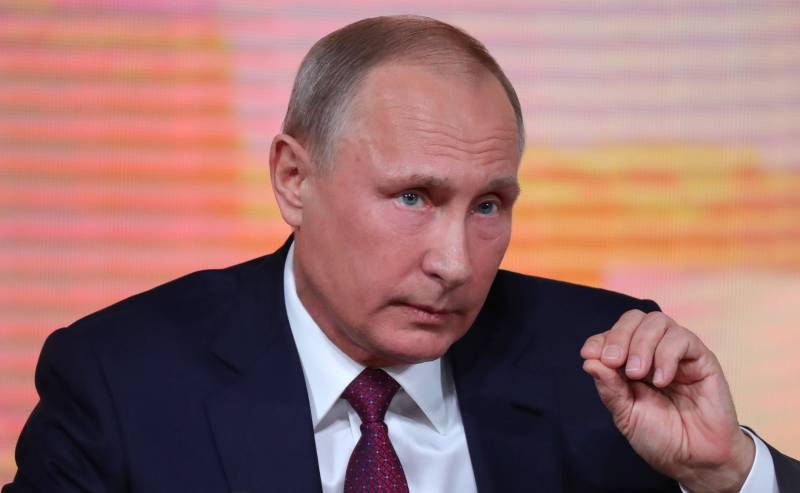 What is Bandera Ukraine, established on the remains of post-Soviet Ukraine? it история about how for 5 billion dollars invested, according to the deputy. US Secretary of State Victoria Nuland, in the "Ukrainian democracy", you can mislead the people by bribing a part of its elite. And where is this "democracy"?

The Bandera regime that emerged led by Poroshenko’s “cynical Bandera” (these are his own words) is historically hostile to Russia and, moreover, is a puppet under “external control” of the United States, therefore it acts in the interests of the United States and not in its own interests, and thereby destroys itself! Russia cannot prevent this and therefore is waiting for this process to come to its logical conclusion that it is in Russia's interests: no one needs hostile alien puppets on its borders.

In 2018, Kiev needs to pay the order of 30 billion dollars to the IMF and other foreign lenders. The regime has no such money, and there is no place to take it. There are two visible exits: either a default with the subsequent sale of land, or the resumption of the war in the Donbas, which, as we know, can write off everything. Washington brought Kiev to this fork, and now pushes the military scenario with supplies of Javelins, Senator John McCain rubs his hands in anticipation of the resumption of war. Poroshenko officially announced the strengthening of the military group in the Donbas.

Russia avoids direct confrontation with Bandera, because Washington stands behind it. It is important for Russia to show how the USA and Europe use this replica for their own selfish purposes in order to teach their allies a lesson and those who are liberalizing in their own country: do not go to Europe for a walk! In fact, Russia uses the Bandera Ukraine as a bad example, discards Europe, as a warning to the whole world, as a “hot potato”: euro-associated — so be responsible for those whom I tamed, seduced, and robbed.

To hide the consequences of the Euro-Association, whose standards have been operating in the country for two years, Europe is raising a campaign about terrible corruption that has hit the Poroshenko regime. Poroshenko has corruption, she has always been in Ukraine - she is in Europe too! - it was under President Yanukovych, and its dimensions are about the same, but with the corruption of Yanukovych the country somehow developed, and today it is falling apart! The point here is not corruption, but a completely different conservatory.

The corruption of the “Poroshenko regime” is deliberately blown up by Europe to hide the consequences of the Euro-Association of Ukraine, which is destroying the “non-standard” industrial base of the country with its standards, as many economists and Russia independent of Europe and the United States warned about Maidan. Even Yanukovych realized this and asked for a European Union postponement for half a year, for which the USA and Europe gave him Euromaidan! And the "cookies" for this ride.

Europe’s accusations of “Poroshenko’s regime” of corruption are identical to those of the “Yanukovych regime” corruption - this is a mild scenario of the demolition of Petro Poroshenko’s power, somewhere analogous to the demolition of Yanukovych, with Peter’s residency moving to, say, Spain. But all the sins of the Euro-association he must take upon himself, a corrupt official, and be silent, like a fish about ice. Otherwise, some fighters against the “corruption of the regime” will be killed, as Boris Berezovsky was killed in London. Another solution to this issue is the scenario with the Javelins from Senator John McCain, who will write everything down, maybe together with Poroshenko. Like a fire in a warehouse where theft was found.

Europe advocates a "soft" option, so loudly screaming about the corruption of the "Poroshenko regime". The United States is promoting a "tough" military option, so they shout less about corruption in Ukraine, and lean on the "preservation of the territorial integrity" of Bandera. With the new war in Ukraine, the USA is also disrupting the construction of the Nord Stream - 2 and taking control of the power industry of Germany and Europe with its liquefied gas supplies. Germany does not want a war in Europe, nor to switch to expensive liquefied gas, even if it is American. The “Norman story” of 2014 of the year repeats: Atlantic unity is again under threat. Russia is interested in stabilizing the “hot potato” Poroshenko so that it can burn its hands to the western “colleagues” for a long time, restraining their expansion. Hence, this strange "vague" position of Russia in Ukraine.

In today's Ukrainian disposition, the position of Poroshenko’s “cynical Bandera” is least clear, does he really count on anything? His endless maneuvers are already irritating Western sponsors, they are already saying this to him openly, accusing them of corruption, refusing new loans, finally sending Mikhail Saakashvili, a stateless man to Kiev, but a “color revolutionary” with the idea of ​​“removing Poroshenko’s pusher”.

Another strange character on the Kiev scene is politician Viktor Medvedchuk, Putin’s godfather and Poroshenko’s special envoy for humanitarian affairs, who organized the New Year prisoners ’exchange in the Donbas. He publicly criticizes American special representative Kurt Walker. “Interfering with its arguments in the settlement in Ukraine”, criticizes official Kiev for not wanting to talk directly with the republics of Donbass, and at the same time, the SBU has no complaints about it. The Avakov Nazi "Azov" tried to attack the office of Medvedchuk in Kiev, but without success ...

Ctrl Enter
Noticed oshЫbku Highlight text and press. Ctrl + Enter
We are
Reports from the militia of New Russia for 27-28 September 2014 of the yearResults of the week. "Well, do not change me because of every idiot!"
68 comments
Information
Dear reader, to leave comments on the publication, you must to register.