He was destined to put an end to the war. 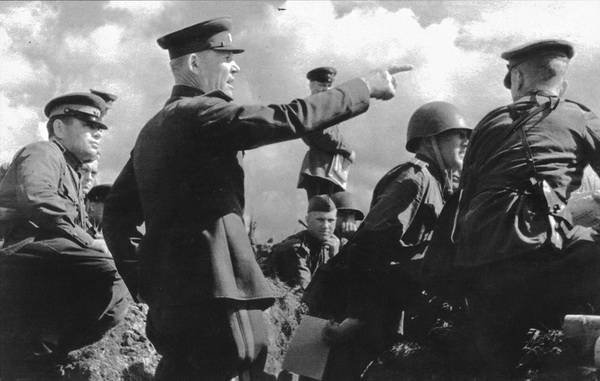 An entire generation of Russians grew up, who saw Marshal of the Soviet Union Ivan Konev only in photographs and most often in formal portraits. Therefore, a verbal description of the commander, one of the creators of our victory, left to descendants Konstantin Simonov seems appropriate: “It was worth seeing for the first time, as it immediately came to mind: this is the real old Soldier. Though the marshal. Deep, firmly carved over the years features of a somewhat rustic face. Smart calm eyes of something that just did not see in his lifetime man. He was not in uniform, but in civilian clothes, and was equally like a retired steelworker or a still working collective farm chairman. But most of all on the Soldier. ”

On the way of Konev, everything happened. Together with the people, the commanding staff of the Red Army and the Red Army masses, he experienced not only the triumph of victories, but also the bitterness of defeats.

In May, 1941, when the Soviet Union smelled gunpowder, Lieutenant General I.S. Konev, who had previously commanded the troops of the North Caucasus Military District, was ordered to form the 19 Army in the Cherkassy region from the formations and units and prepare it for war as a reserve for the USSR People's Commissar for Defense. A few weeks later, this army heroically and sacrificially from July to September held back large enemy forces in the strategic battle of Smolensk. Together with other associations of the Western Front, it did a lot to thwart the plans of the Hitlerite command to break through to Moscow.

The most difficult test for the entire war fell to the lot of Ivan Konev, already a colonel-general, in September-October forty-one. The western front, which he commanded, along with the Reserve and Bryansk, could not withstand the enemy's concentrated blows, and most of his armies, including the 19, which was especially expensive for him, in the Vyazma region were surrounded.

In that dramatic for I.S. Konev moment army general G.K. Zhukov, first appointed representative of the Supreme High Command with the broadest powers, and then commander of the Western Front, which absorbed the remnants of the troops of the abolished Reserve, asked I.V. Stalin appoint Konev to his deputy. Konev, as a military leader with the potential of a commander, was given to a man who was endowed with a talent of a strategist and an outstanding will, a relatively independent sector — the leadership of the Kalinin group of troops, which was transformed into the Kalinin Front in October.

This front, led by Konev on the Selizharovsk and Torzhok directions, stopped the enemy’s offensive, holding down the 13 divisions of the Army Group Center. They were never transferred to Moscow. During the counteroffensive, the front forces, with skillful actions, knocked the enemy out of Kalinin and drove them first to 60 – 120 kilometers, and then further away to Rzhev. For I.S. Konev was entrenched with the reputation of a commander with exceptional organizational skill, decisiveness and a strong will. On the long and thorny path to victory, his glory has only grown stronger since then, his name has become overgrown with legends.

Exploring the military journey of the holder of the Order “Victory”, twice Hero of the Soviet Union, Marshal of the Soviet Union Ivan Stepanovich Konev, historians made eloquent calculations: from 1.418 days during which the Soviet-German front existed in World War II, Konev spent on it 1365 days and nights . 72 days at the command post of the 19 Army and 1293 at the command posts of the Western, Kalinin, North-West, Steppe, 2 and 1 Ukrainian Fronts. None of the other Soviet military leaders during the Great Patriotic War commanded the front-line forces for as long as Ivan Konev, who entered the war as a lieutenant-general, and in February 1944 of the year he wore marshal shoulder straps.

Management experience at the tactical, and then operational level, Konev acquired by working hard on himself for many years. During the First World War, he mastered artillery in the school non-commissioned officers. In Civic, he showed himself in a different capacity: the commander of the detachment, the commissar of the brigade and division, the headquarters of the People’s Revolutionary Army of the Far Eastern Republic. For five years he commanded the 50 rifle regiment in Nizhny Novgorod.

To the Military Academy named after MV Frunze, at its special faculty, I.S. Konev entered from the post of commander of the rifle division. After graduation, he was sent to Belarus, where he commanded a division and corps. Then it was time to gain experience in managing large military formations: in the winter of 1937 – 1938, Konev commanded the Special Group of Soviet Forces in Mongolia, a year later - the 2 of the Separate Red Banner Far Eastern Army, then troops of the Trans-Baikal and North Caucasian military districts.

I.S. Konev happened to lead the front forces in more than 40 offensive operations.

Researchers have argued, not without reason, that the superiority of Soviet commanders over the Germans, although it did not manifest itself immediately, not in the first months of the war, was based precisely on their rich and diverse military practice.

In the Battle of Kursk I.S. Konev commanded the troops of the Steppe Military District, July 9, 1943 renamed the Steppe Front. The Steppe Front was faced with the task of preventing a deep breakthrough of the enemy from the side of Orel and Belgorod, and during the counterattack, increasing the power of the blow from the depths. However, the situation was such that part of the forces of the Steppe Front had to be sent to strengthen the Voronezh Front. Thanks to the operational actions of I.S. Konev’s task set by the Supreme High Command Headquarters was resolved as soon as possible, and under Prokhorovka the Nazis unexpectedly ran into our tank army and in a fierce oncoming battle lost up to 400 of their latest tanks and assault guns and about 10 thousand soldiers and officers killed.

From 3 August 1943, the Stepnoy Front, together with Voronezh, launched a counteroffensive on the Belgorod-Kharkov sector. Two days later, the troops of the Steppe Front drove the enemy out of Belgorod, and in the evening of August 5 Moscow saluted the winners for the first time.

For I.S. Konev was characterized by a constant desire to surround the enemy, dismember his troops and break into parts. He sought to do this by planning and conducting most of his operations, and, as a rule, he achieved success. His commanding talent was revealed with particular fullness in the Korsun-Shevchenko Operation, where he, in cooperation with the troops of N.F. Vatutin surrounded and defeated more than ten enemy divisions in the “cauldron”. Not less skillfully, the encirclement operation was conducted under Brody (8 enemy divisions were in the ring), south of Rützen (20 thousandth garrison), in Glogau, where 18 thousands of Nazis fell into a trap, in Breslau with its 40 thousandth garrison, in the area Opelna, where they were forced to take the last battle around Hitler's 5 divisions. And in the final of the Great Patriotic War, commanding the 1-m Ukrainian Front, I.S. Konev did everything he could to surround the half-millionth group of Nazis in Berlin and south of the capital of the Third Reich, and then even a larger group in the Prague area.

Stories it was pleased that in the last operation of the Great Patriotic War - Prague, a special role fell to Ivan Konev. Operation with 6 on 11 May was carried out by three fronts - 1-th, 4-th and 2-th Ukrainian. But it was the troops of 1-th Ukrainian, headed by I.S. Konev broke into Prague and, together with the fighting squads of the Czechs, cleared it of the enemy.

“It seemed,” wrote a brave tanker, twice Hero of the Soviet Union, General D.A., after the war. Dragoon, - that he, the front commander, squeezed out of the tanks and of us, tankmen, everything we can do. His bold rearrangements and decisive maneuvers of tank corps, whole armies during the battles ... sometimes seemed unexpected not only for the enemy, but also for the performers. "

For this figurative certification of his commander, who was valued and loved by the troops, the whole was Ivan Konev, a lad from the Vyatka province, a peasant son, ascended by fate to the number of the brightest commanders of modernity.

Ctrl Enter
Noticed oshЫbku Highlight text and press. Ctrl + Enter
We are
Sinusoid Marshal Golovanov115 marks the birth of the great Russian commander Georgy Zhukov
183 comments
Information
Dear reader, to leave comments on the publication, you must to register.